A Trip To The Vet

Yesterday afternoon we got home after being away for 3 days. Kitty was happy to see us and hopped outside as soon as we opened the door. As I was unloading luggage and putting things away Harland casually mentioned that Kitty was peeing in the yard. A few minutes later he yelled out that she did it again. It’s unusual for Kitty to pee outside, unheard of for her to do it twice within 10 minutes.

When she came back inside, I noticed that she used the litter box several times in quick succession. I cleaned out her litter box and noticed she had been peeing in there in little drips and drabs. She was also licking her back end a lot and was more whiney than usual.

Hmmmm…. I told Harland I thought she might have a bladder infection. I called the vet, and described her symptoms and he agreed. He said to bring her in this morning. So before I left for work Harland helped me put her in her carrier, and then set her on the front seat of the car. During the 10 mile drive, she pressed her nose against the side of carrier until it turned pink and let out a plaintive “meow” every few minutes. 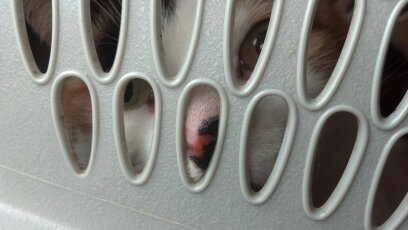 At the vet’s office, I described her symptoms to the vet’s assistant, and she nodded in agreement. I promised to pick her up again after work at 5pm. She picked up Kitty’s carrier and headed down the hall

As I walked out the door I heard Kitty let out another plaintive “meow”.

It’s going to be a long day.

UPDATE:  I called the vet’s office over my lunch hour. Kitty does have a bladder infection, and has been given some meds for it. While she was there, they also did her annual shots. I’ll be picking her up after work, and I’m sure she’ll be so glad to get back home again. Thanks for all your good wishes!

Tags: A Trip To The VetKitty goes to the vet