Back in 2012, we had a horrible drought and heatwave. Ponds dried up. Crops withered in the field. Our well dried up.

Pastures were grazed down to the dirt. 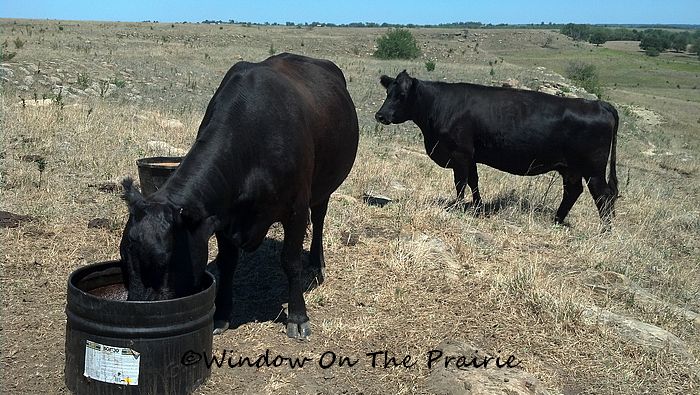 We had to cut some of our corn and turn it into silage just to have enough feed to get our cattle herd through the winter. 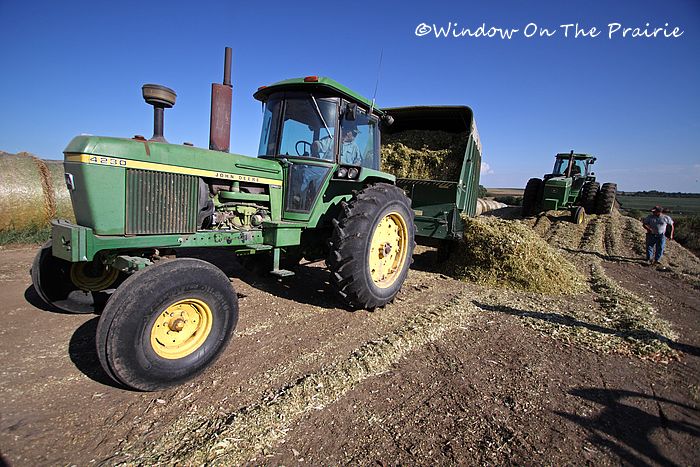 Many ranchers around the midwest had to sell off their cattle because they had nothing to feed them. No rain = no pasture or hay. Cattle numbers in the US fell to an all time low. Crops died in the field, and for many farmers, there was no harvest.

This spring started out on the dry side, and we were beginning to worry.

Then in late April things changed.

Then it began to rain more. An inch or inch and half. Several days a week. Hmm.. a little more than usual, but still nice.

Then in the last couple weeks, it kicked into high gear, raining nearly every day. This week alone we’ve received at least six inches, which is more than the normal rain amount for the whole month of June. Yesterday morning it poured and poured – for hours. We got three inches. The ground is now completely saturated.  Rivers and streams are running high. Ponds are backing up into fields or overflowing their spillways.

After yesterday morning’s rain, the pond up the road from our house backed up across the road and into the neighbor’s field. The road to our house is now impassable. 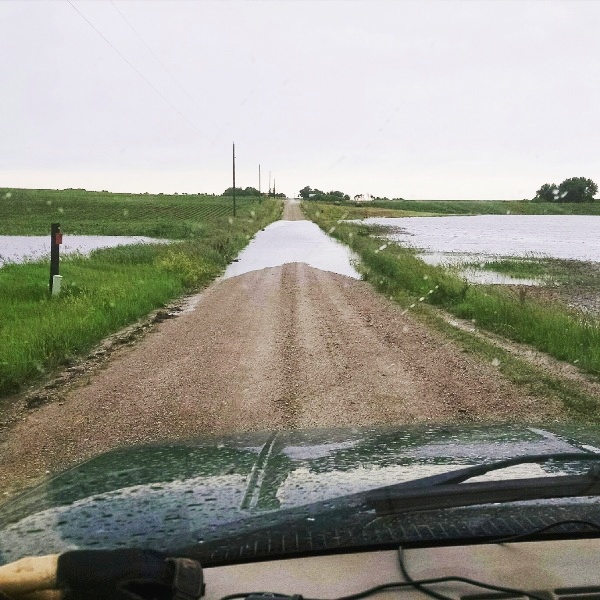 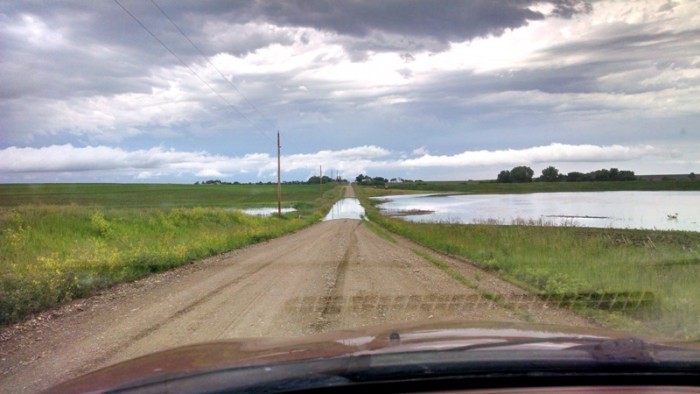 Luckily we have another way to get to our house, but getting from the house to our farm went from a one mile short trip to a six mile trek.

Here’s a look at a neighbor’s pond where the water is overflowing on the emergency spillway: 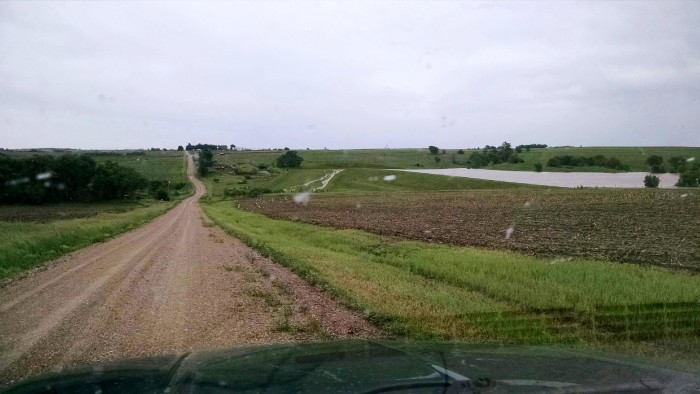 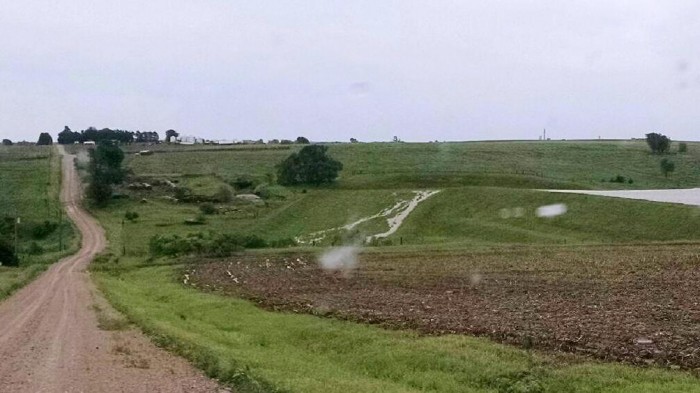 Harland was able to get the corn planted back in April as usual, but he’s not done getting the soybeans planted. The fields are just too wet. And the June 15 crop insurance deadline to plant the beans is quickly approaching.  Normally, we plant the beans in early May.

Soon we’ll have to start cutting and baling hay. But cutting it when it’s this wet is a nightmare because the wet grass clogs up the equipment, and even when we do get it cut, it needs warm sunny days to cure so it can be baled.

And then there’s the oddity that has appeared in our yard. Yesterday afternoon, I was standing at the front door watching it rain when I noticed a shadow in the front yard. I stepped out the door to investigate. It was not a shadow.

It was a sinkhole! 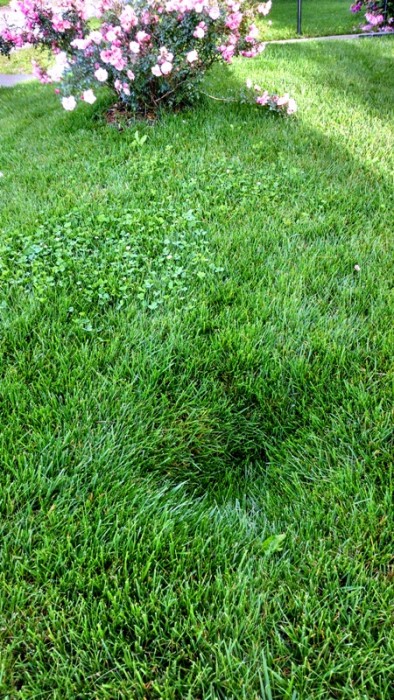 A hole about 18 inches across and about 18 inches deep magically appeared sometime yesterday. The dirt has just slipped away somewhere (???) and the turf has simply sunk down into a hole. I was going to call Harland to ask him about it, but decided to wait until he got home and see if he noticed.

As he came in the door about a half hour later, he asked, “Hey, did you notice we have a hole in the yard??”

There used to be an old well there which was filled in years ago.

Here’s an old, old pic of the house, the building there on the left, and the well in the front yard with the windmill atop it. 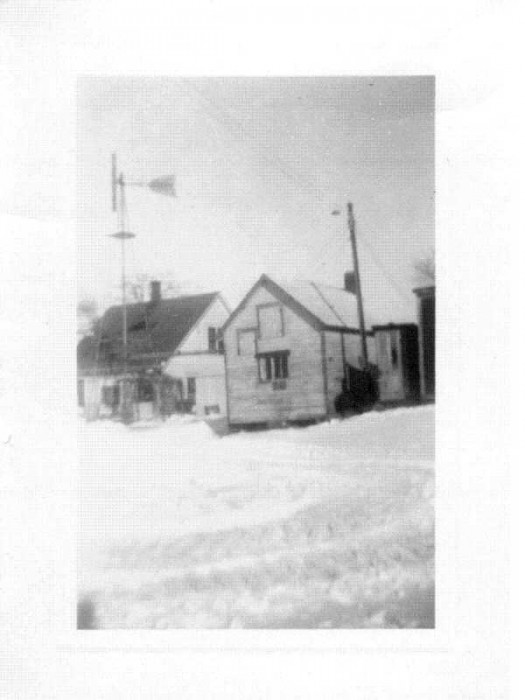 Here’s another pic taken many years later, sometime in the 70s I believe, of Dick, whose family Harland bought the house and land from. He’s sitting atop the well. 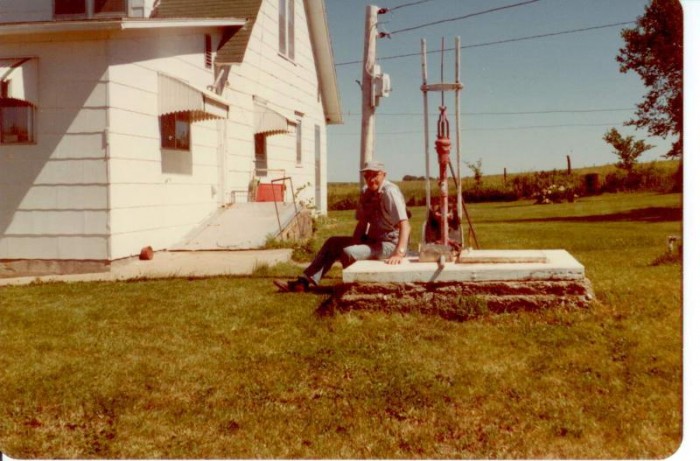 Harland bought the place about the year 2000 and filled the well a few years later. He used bentonite and sand, per the instruction of our county’s soil conservation district.

Harland related a story to me that took place a few years after he filled the well where one day after mowing the grass he was relaxing in the house when he heard a loud *Thwump*. Upon going outside to investigate found a hole a couple feet across and 10 feet deep. He said a friend of his has joked that we must have a river running under our yard. Oh ha ha….that’s a riot, I tell ya. But it got us to speculating that maybe groundwater regularly washes away the fill that was put into the well resulting in occasional sinkholes in our yard. Well, whatever is going on, we’re waiting to see if the hole gets bigger before filling it in. This morning, it was a little bit deeper.

If you don’t hear from me for a while, you might come and see if our house is still in the yard.

The upside to all this rain is that our lawn, as you can see above, is very lush, and the flower beds and vegetable garden are doing well, except for the cucumbers – too much water for them. Early this spring, we planted a windbreak on the south side of our yard, and with all the rain I’ve not had to water the trees even once, which is fabulous in my book as there are 75 of them out there and ME dragging a hose around to 75 trees makes my toes curl. And there’s 75 more trees we planted for a new windbreak up at the farm. Haven’t watered them either. Wonderful. Oh, and there’s plenty of grass for the cattle in the pasture.

And so here we are. I’ll never pray for it to stop raining, but we’d like a break for a while.

How about you?  Any crazy weather to report in your area?