Muffin has grown as big as he’s going to, we think, but now he seems to be bulking up, like he’s drinking protein shakes and working out at the gym. Most of the time, the size difference between him and Kitty, who we’ve always thought of as large for a female cat, isn’t very noticeable.

Case in point, here’s a couple pics I took the other day.

In this pic, they look about the same size: 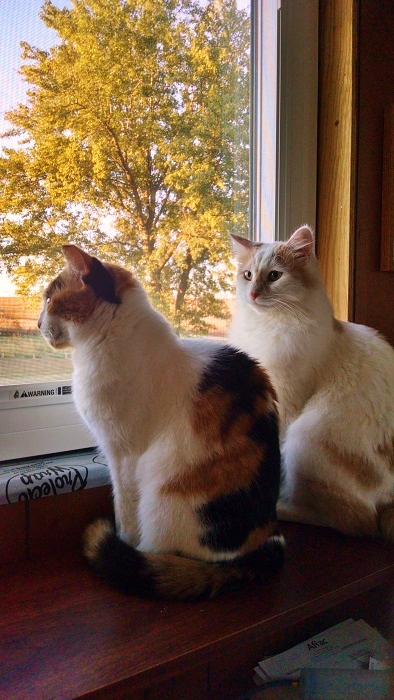 But then I moved around behind them so they were the exact distance from me and both sitting in the exact same pose: 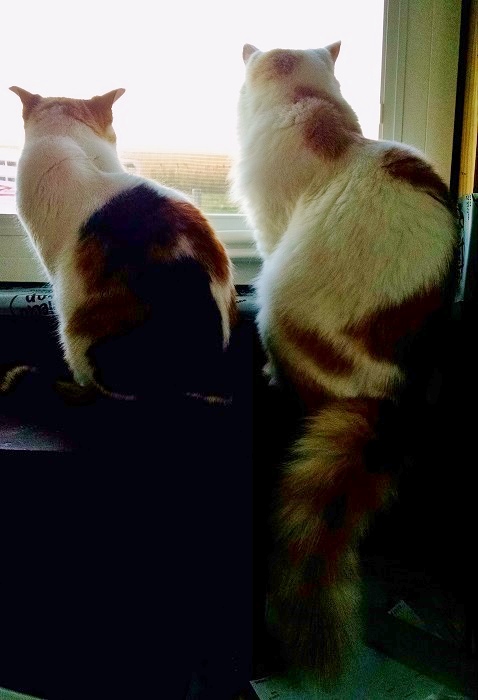 Even I was surprised by how big he’s gotten!

Strangely enough, both he and Kitty weigh the same, about 8 pounds. Muffin has a lot more fur than Kitty so that helps to make him look bigger, but he’s still definitely taller/longer than her.

On the subject of the fur: His is long and there’s a LOT of it. It drops off of him in chunks,especially when he and Kitty wrestle. We have a bag-less vacuum and every week, when I empty it out, a big ‘ole plug of white fluffy Muffy fur drops out, about 6 inches across. I don’t know why he’s not bald for all the fur he sheds. I sometimes wonder if I was to shave him, would there be anything left when I was done? Would I just keep shaving and shaving until Muffy disappeared in front of me?

By the way, guess who’s still winning their wrestling matches?

You guessed it – Kitty. She watches him tap dance around her, then she pounces and flattens him out. And there’s been an increase in chasing lately. Both of them run through the house at top speed. Sounds like a couple racehorses galloping past.

Kitty is as trim and in good shape as she’s ever been. She was getting a little round before Muffin arrived, but not anymore. He’s exercised it right off her. She’s happier too, more relaxed and easy going, which is what we were hoping for when we decided to keep Muffy.

Despite the fact that he’s bigger than her now, she still thinks of him as her kitten though, and even shares her food with him.  When he moves in on her food pan, she steps back and let’s him have it all if we don’t intervene. He’s on young cat food, while she’s on elder cat food, otherwise we’d feed them from the same pan.

BTW, they are both relieved that the siding project is done. All the pounding and being confined to the office- It was wearing on them. But they’re both happy campers now.

Have a great weekend all!