A Cow’s Trip To The Beauty Parlor

For the last month or so, we’ve been feeding one of our cows a generous portion of grain to fatten her up for a trip to the butcher.  We decided we shouldn’t mention the word “butcher” to her, but tell her she would be taking a trip to the beauty parlor instead. So last week the date finally arrived for her to get her hair and nails done, so to speak. Harland loaded her onto the stock trailer and drove her to town. He arrived at the butcher before they opened, but they had told him earlier to just drop her off into a specified pen. So he did that and then headed back home.  Later that morning I received an email at work from Harland:

“I dropped the cow off at the locker this morning.  Then I got a call a little bit ago from the butcher.  Apparently the gate was open at the far end of the pen and she got out.  The cops and the butcher were out chasing her.  Pretty good mental image of a guy with a bloody apron and cops chasing a cow around town.  They got her in with another farmer’s cattle, and the guy said he was going to get his cows up tomorrow to work them, so I’ll go over then and bring her back home.  We’ll try again on June 6.  It won’t hurt her to have a couple more weeks on grain.  But I’m pretty sure she now realizes that it is NOT a beauty appointment.
Hope your day is going well.”

Cows have a good memory, and so we’re hoping we won’t have any trouble taking her back to the butcher. I don’t know……. 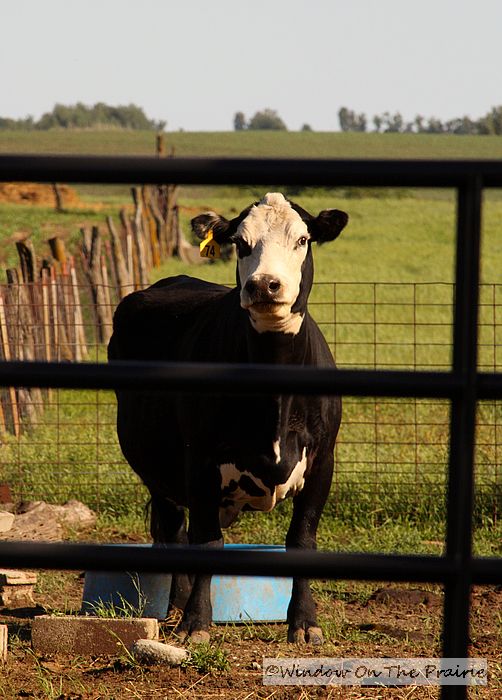 See that look in her eye?

She’s onto us now.

Tags: A Cow's Trip To The Beauty Parlor