Earlier in the summer, our small herd of heifers decided one day that they wished to eat something they saw on the opposite side of an older fence. So they did what any self-respecting 800 pound animal would do: they wallowed down the fence and proceeded to chow down in forbidden territory. Bad heifers. Bad.

Yesterday, I took a vacation day off from work so I could help Harland, Gerald, and Ramona with another concrete pad for the cattle working facility. (More Pics soon!) The concrete truck arrived at 8am, and then we pushed concrete around for 3 hours until we were done. 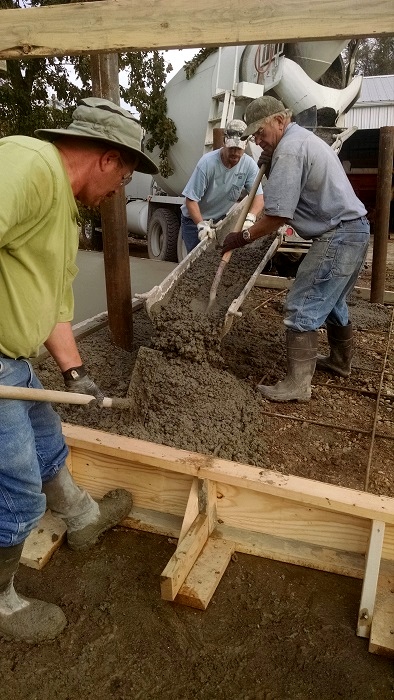 That’s Harland in the foreground, Gerald on the right, and the truck driver there in the back.  (BTW, No work out in a gym will ever compare to the work-out you can get from pushing concrete around. My arms and legs were jello by the end of it.)

We went home for lunch, and afterwards Harland and I set the final three steel posts for the cattle working facility. Then we cleaned up the work area. I was hoping we were done for the day, but Harland announced we needed to work on some electric fencing. This was about 5pm.

The Boss:  “This won’t take long and then we can go home.”

The Boss: “You don’t have anything taken out?”

Me: “No. You want Bacon and eggs? I can defrost the bacon in the microwave.”

The Boss: “No no…we have to build fence first. We’ll be bringing the cows home soon and we’ll need to put them in where the heifers wallowed down the fence”

So we hooked the fence supply cart behind our farm utility vehicle (a side by side) and drove out into the pasture.  Harland had removed the wreckage of what was left of the fence a few weeks ago. 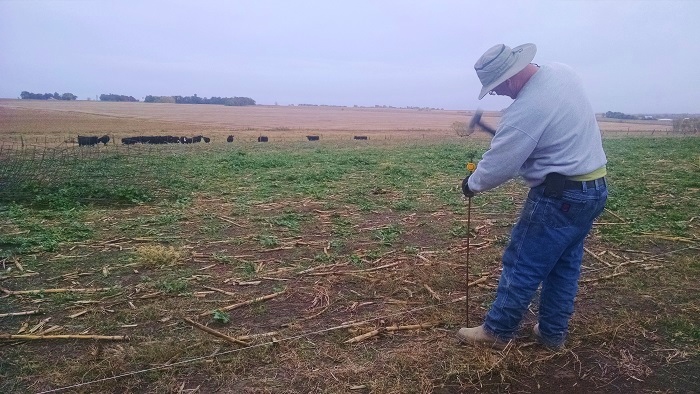 The heifers watched us from a distance. No doubt they were scheming and plotting. Bad heifers.

Soon we were done. The electric fence is temporary until we find the time to put in a permanent fence.

I drove the side by side back to the barn, we hopped into the truck and headed home where we had bacon, scrambled eggs and toast for supper. Showers and bed followed.

And another long day on the farm was completed.  Zzzzz…..