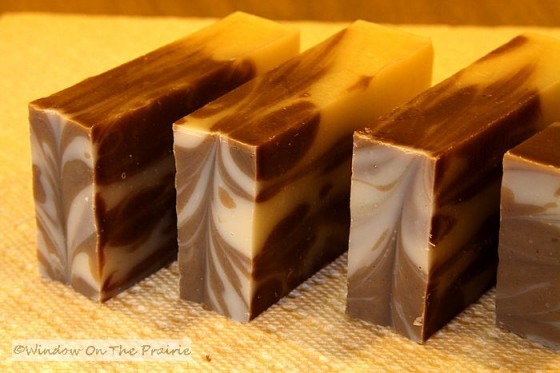 I’ve been making soap again. I just love to make soap! Every fall as the weather cools I get the urge to pull out my soap-making tools, buy some fragrance oils, and make lots of sweet-smelling, sudsy, cleansing – but gentle homemade soap. And the best part is that I know exactly what’s in it- and what’s not in it. Soap is pretty simple: just oils, water, and lye. 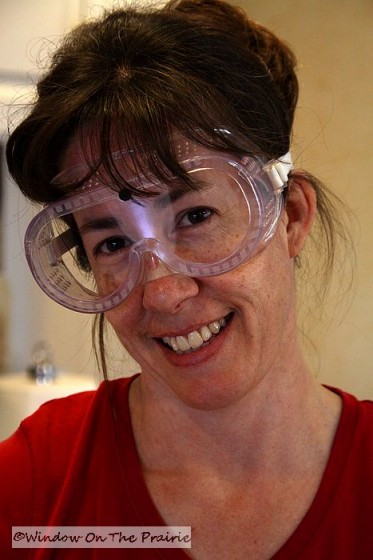 But this isn’t your grandma’s harsh lye soap, this is a kinder gentler version. All soap has lye – it’s something you can’t get around, but once the oils are combined with the lye, the two become a third substance that is neither oil nor lye:  soap.

First, I put my gloves and goggles on, and then I measured out the water and lye, combined the two, and then stirred well. Then I measured out my oils, and heated them up on the stove. When the oils and water/lye combo cooled down to between 95 – 100 degrees F, the next step was where the action began. I poured the lye/water into the oils and the mixture began to change immediately. 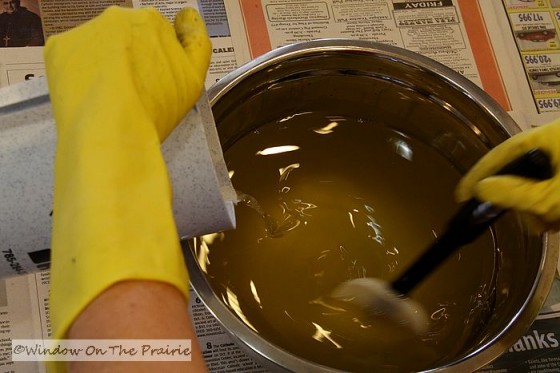 It became cloudy and began to thicken. After about 10 minutes of stirring with my stick blender, 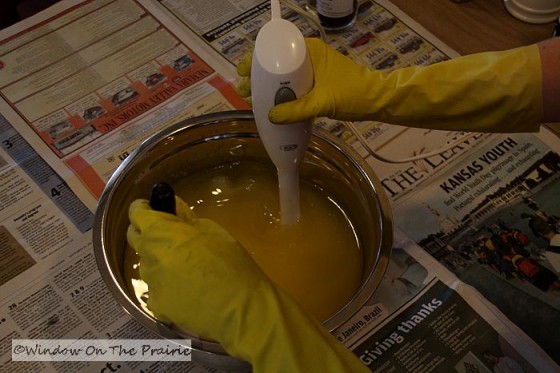 it was ready for the Almond fragrance oil, which had been warming in a glass of hot water. 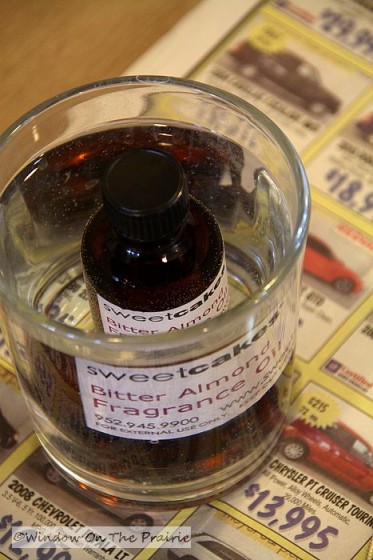 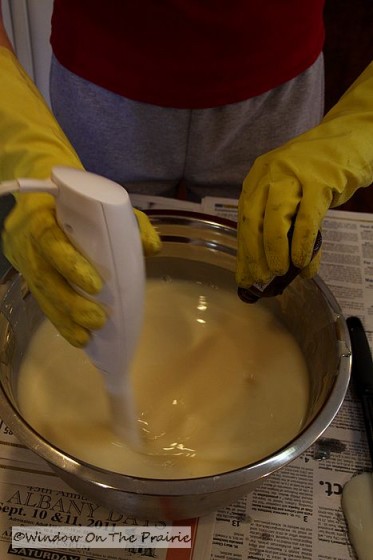 After the fragrance oil was stirred in well, I poured about 3/4 of the soap mixture into the mold. 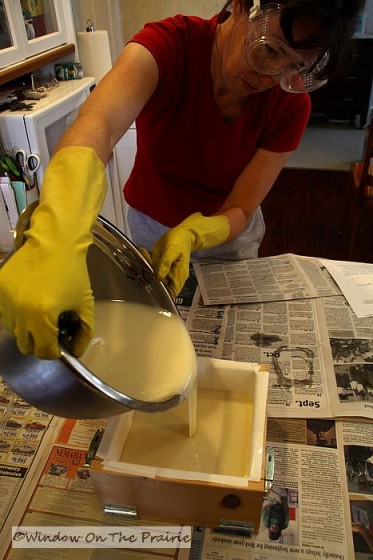 Then I mixed the cocoa powder to the remaining soap, 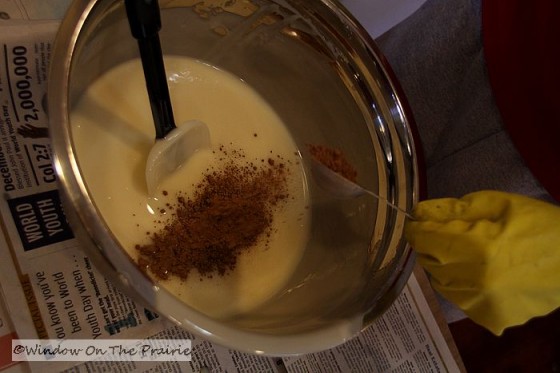 and then I was ready for the fun part. I very carefully poured the cocoa soap into the mold, 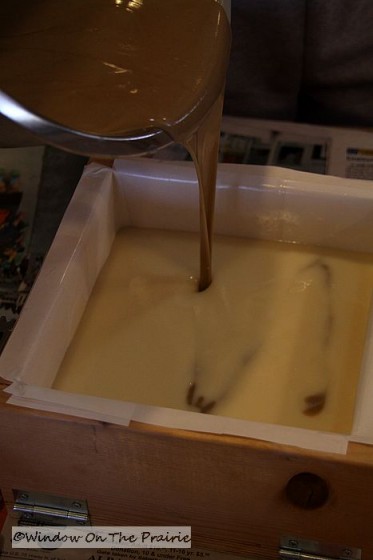 and then streaked it with a butter knife to make pretty chocolate swirls. 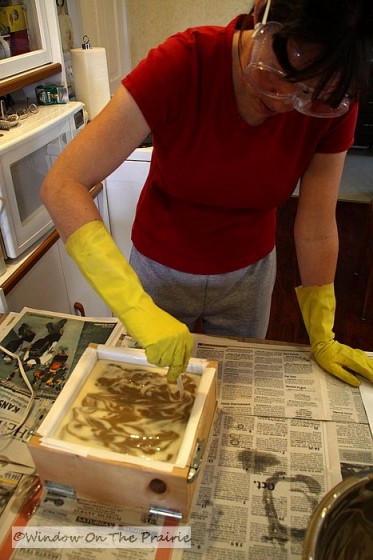 I let the soap do it’s thing for 24 hours, and then it was ready to cut into bars. These will have to cure for about 8 weeks before use. I can’t wait to try it! 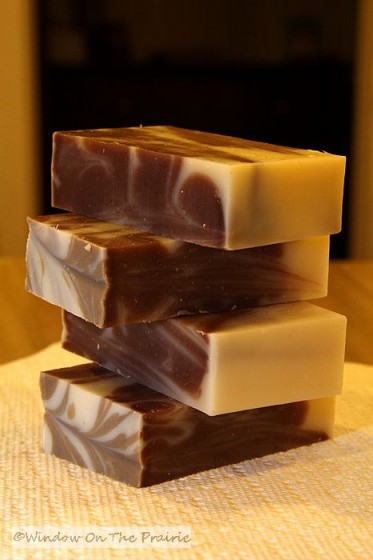 Kitty wasn’t impressed, which is kinda funny considering how much of a clean freak she is. 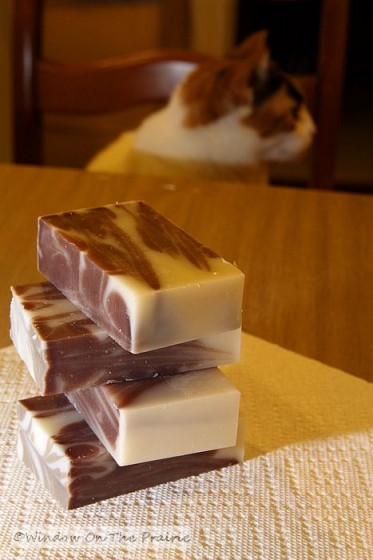 But then Kitty is more interested in food than cleaning.

In fact, I had to put a little dab of sour cream on the table in front of her to hold her interest long enough to get this shot.

(For more specific instructions on how to make soap, please refer to my earlier soapmaking post.)