Time To Leave The Barn

We’re about half way done calving now. So far so good. There have been a lot of cold nights, and Harland has been checking the cows and calves most nights to make sure everyone is ok. It’s not been a very muddy spring and that’s a good thing. Slogging through slop all day is not good for anyone. About half of the heifers (first time moms) have calved , and they’ve all done it on their own with no assistance from us.

Three more heifers calved yesterday. The first came about 1 am, and the 2nd in the afternoon. Harland put them both in the barn where they each got their own pen. Harland puts all new moms in the barn so he can make sure the moms have bonded with the babies and the babies have nursed from their moms. Once he sees that everyone is doing ok, he lets them out of the barn into the pasture near our house with the other moms and babies. When I got home from work, Harland was ready to let the two new moms out with their babies.

Here’s the one that was born at 1 am. 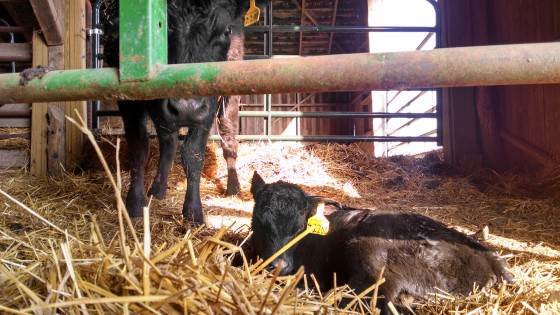 Note that Mom is giving me the evil eye. “Don’t touch my baby. I mean it. I’ll flatten you in a heartbeat puny human.”

I didn’t get a pic of the 2nd mom who had her baby in the afternoon, but I did get a video of Harland releasing him and his mom, along with the 1st mom and calf out into the pasture around 6 pm:

The 3rd heifer of the day to have her calf was pacing around in a pen where Harland had put her at 3pm. He had seen her standing in the lot with the other heifers switching her tail about as if a fly was biting her butt. Except that it was below freezing yesterday and there were no flies. Heifers and cows will sometimes switch their tails when they are in labor. So Harland put her in a pen in the barn.

Three hours later at 6 pm, we checked on her to see if there was any progress. There wasn’t. She looked like she was pushing, but there wasn’t the usual amniotic sac hanging out and no little feet were showing. We were worried, and hoped we wouldn’t be having a late night session of calf pulling.  We ate supper and then Harland left to attend a fire meeting.

At 7:30 pm, I waltzed up to the barn to check on the heifer again. I didn’t expect to find any change, but as I neared the barn I could hear her mooing softly like new mothers do to their calves.

“Nah..couldn’t be,” I thought as I entered the barn. But lo and behold, there she was, standing over a wet bundle in the straw. 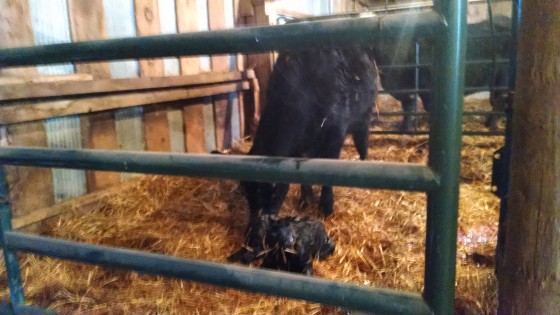 (taken with my cell phone camera)

She had given birth, was on her feet, and had removed the amniotic sac from the calf, all of which was great for a first time mom. I watched her nudging the new calf to stand.

But as I watched I grew concerned…she was doing more than nudging – she was shoving him roughly about  and screaming in his ear too. He was doing his best to stand but she kept knocking him over or pushing him against the barn wall. One thousand pounds against 60 pounds is not a fair match. She continued to push him about until she pushed him right under the gate and out of the pen.

Well, ok then! Now the calf was safe from his crazy mother, but he wasn’t going to be able to nurse. And his mom, now separated from her baby, got frantic. She bawled loudly, shoved her bulk against the gate, and literally foamed at the mouth.

The situation had gone from bad to worse.