Would you like to go for a walk in a native Kansas prairie? This nature walk is not a long one. We’ll start at the bottom of a large hill, and the trail will wind around the hill through prairie that’s never been under the plow so it’s covered in native grasses and wildflowers. And soon we’ll reach the top of the hill where we’ll be treated to a wonderful view of the surrounding countryside.  Interested? Well, come along then.

There are lots of wildflowers along the trail. This is Rose Verbena. 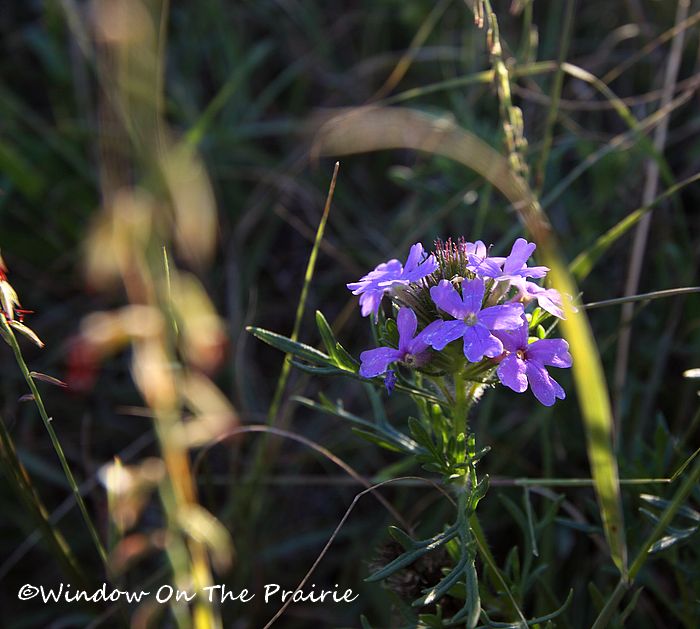 And this yellow one is called Broomweed. 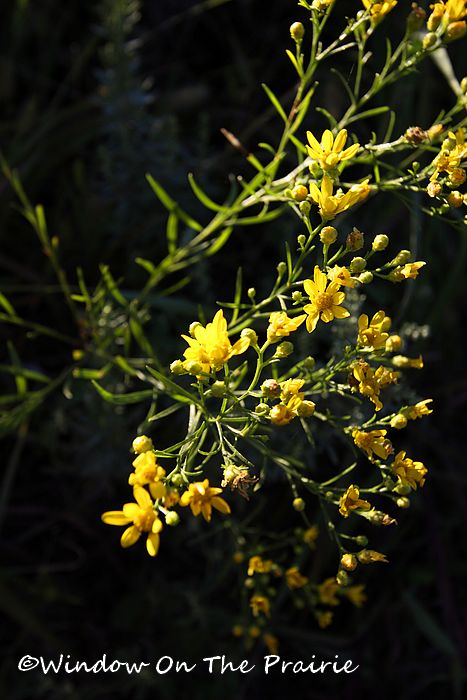 This white one is called False Boneset. 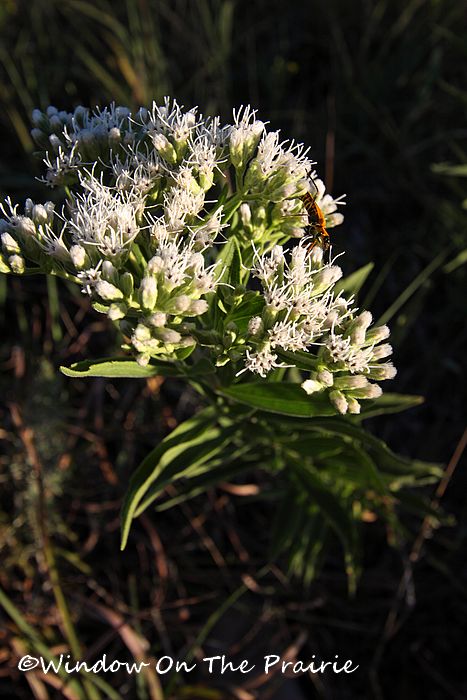 This purple one is called Dotted Gayfeather. 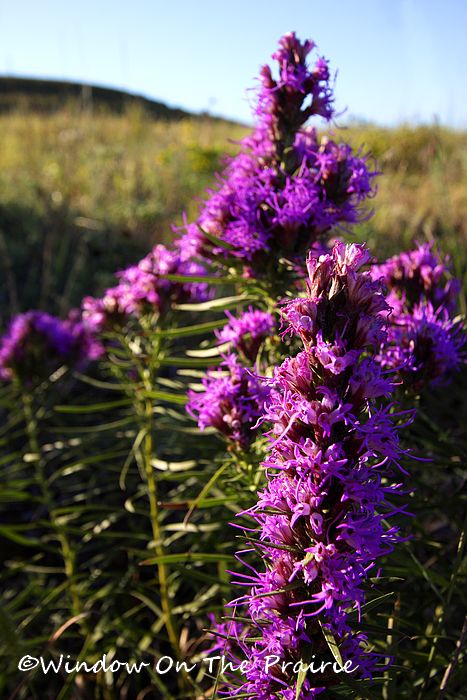 This yellow one has a funny name. It’s called Curly Cup Gumweed. 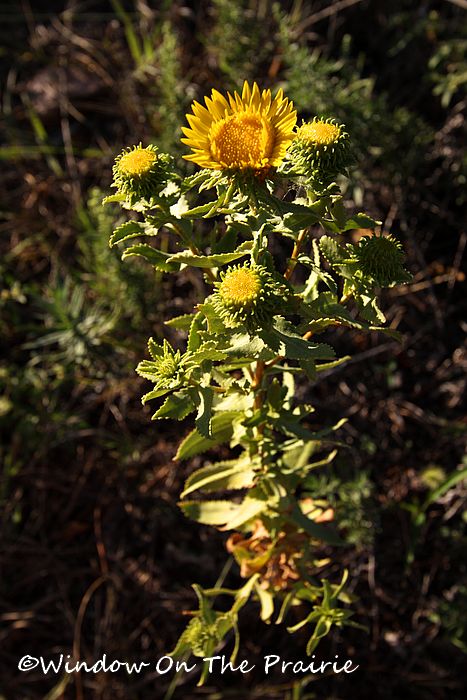 It lives up to its name too as it is very sticky.

Whoops, we’ve dawdled so much Harland got ahead of us. 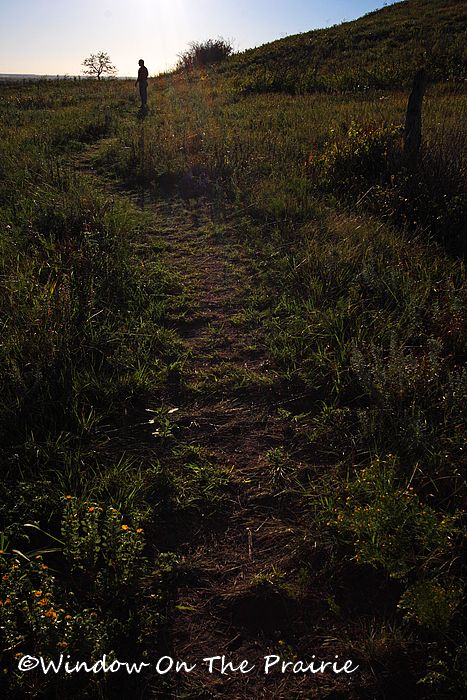 Oh, stop! Check out this white flower that comes up to our waist with flowers at the very ends of its stems bobbing in the breeze. 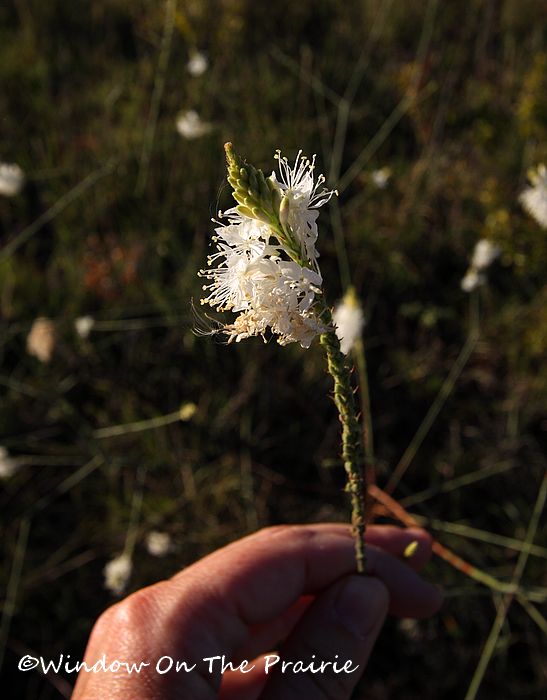 So delicate. It’s called Stenosiphon. It has no leaves at all. During a drought, this plant drops its leaves as a water saving measure, and conducts photosynthesis through its stems. Pretty good idea with the dry year we’ve had here.

Whoops, Harland got ahead of us again. Darn he moves fast! 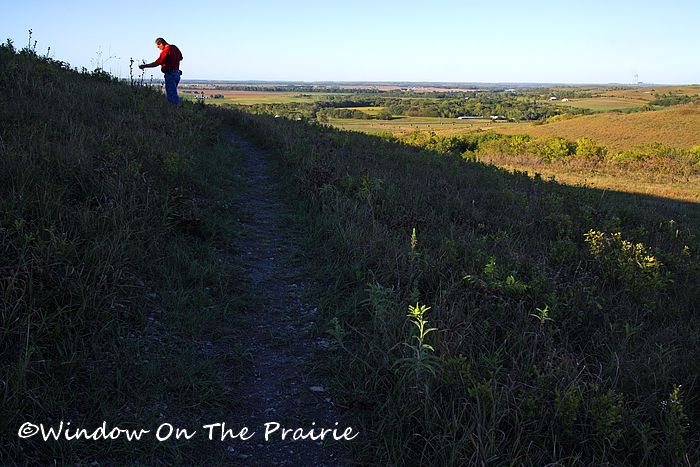 Let’s go… we’re almost to the top of the hill.

And here we are, whew! 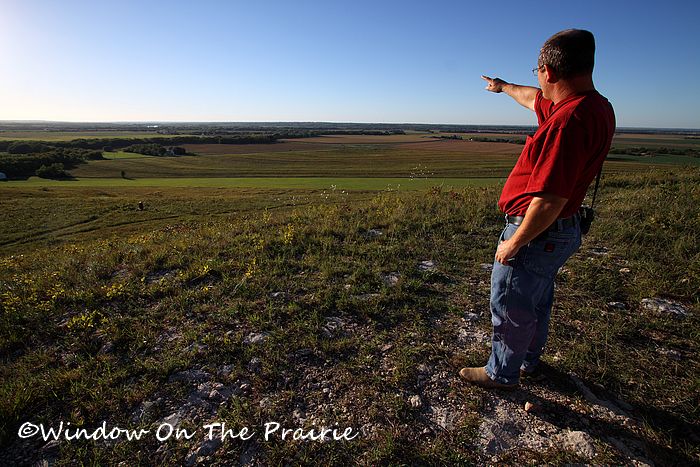 Worth the view huh? That’s the Kaw River valley.

Look, a monument of some sort right here on top of the hill. 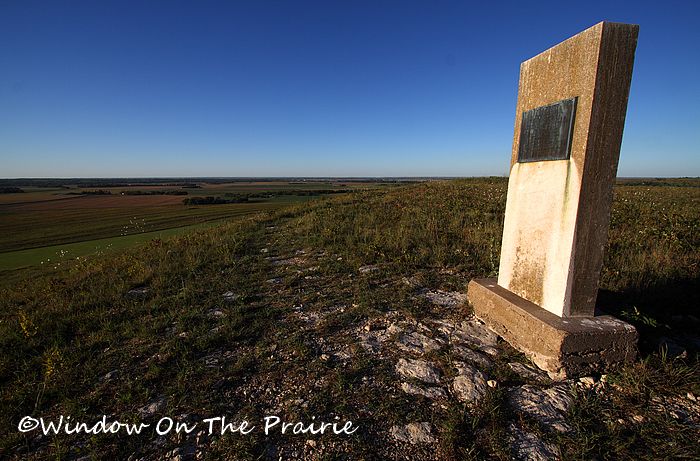 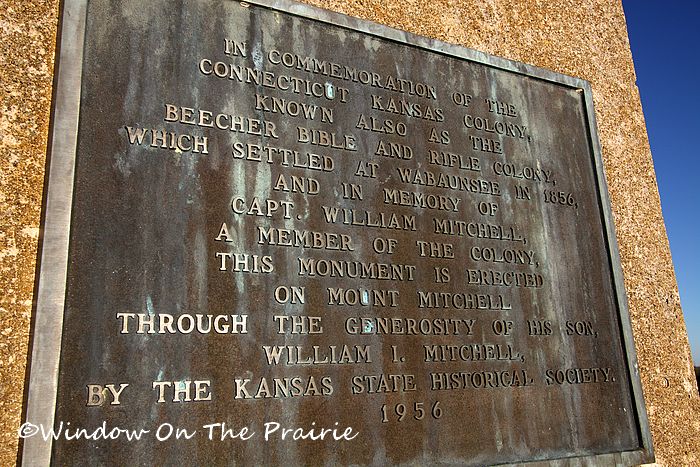 In 1953, Captain Mitchell’s son gave 50 acres of prairie to the Kansas Historical Society in honor of his father, and with the stipulation that the land be turned into a nature park. This never happened, and sometime in the early 2000s, the Historical Society tried to sell the land. Outraged local residents got together to stop this from happening. They formed a volunteer group called the Mount Mitchell Prairie Guards to fulfill the wishes of the original donor, Captain Mitchell’s son. Finally, the Kansas Attorney General ruled that the land could not be sold, but could only be transferred to a non-profit organization. The Prairie Guards partnered with Audubon of Kansas. Since then, a road has been built to gain access into the prairie, the land has been regularly burned to encourage growth of the native plants, and walking trails have been established.

Look, there’s another monument down the hill: 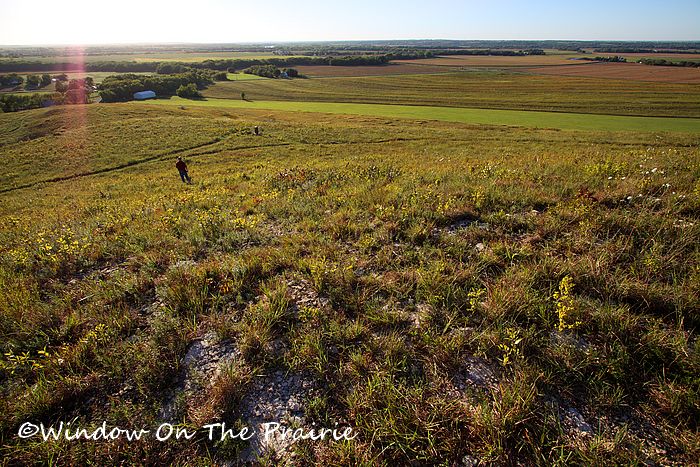 Harland’s going to check it out. Let’s catch up.

Whew. Well here we are. Let’s take a close look at this monument: 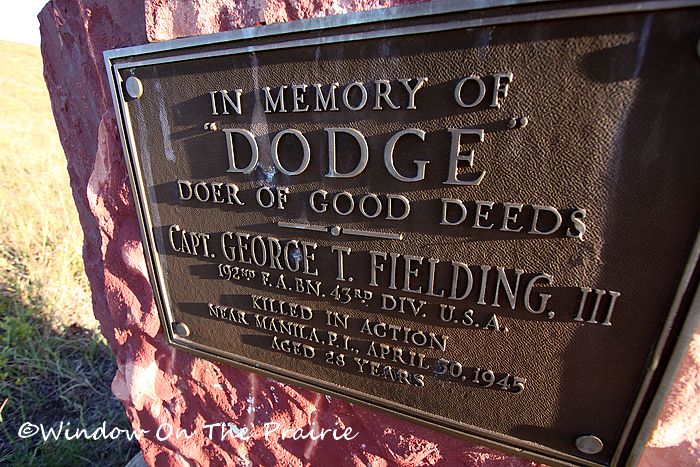 Hmmm….. Must have been a friend or member of the Mitchell family.

Look, milkweed seeds and their fluff. 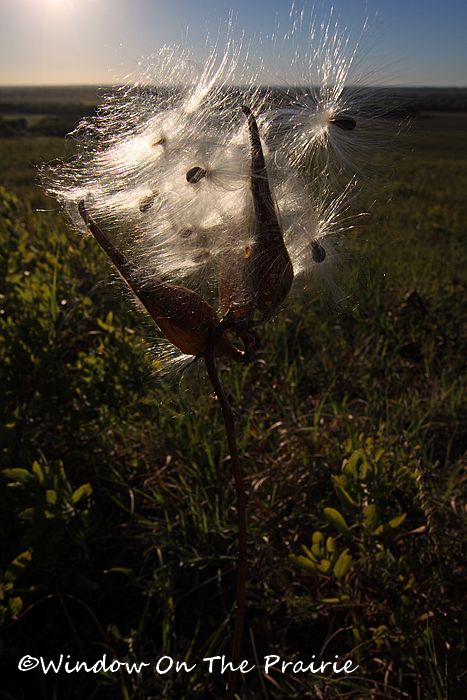 Here are some rosehips, 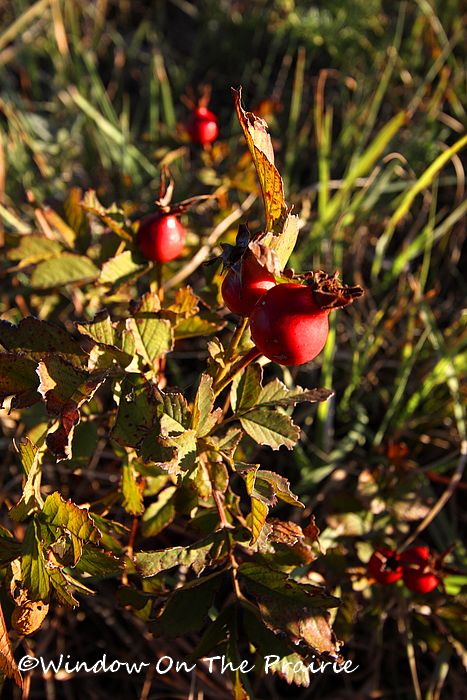 and sumac. The leaves are already turning red. 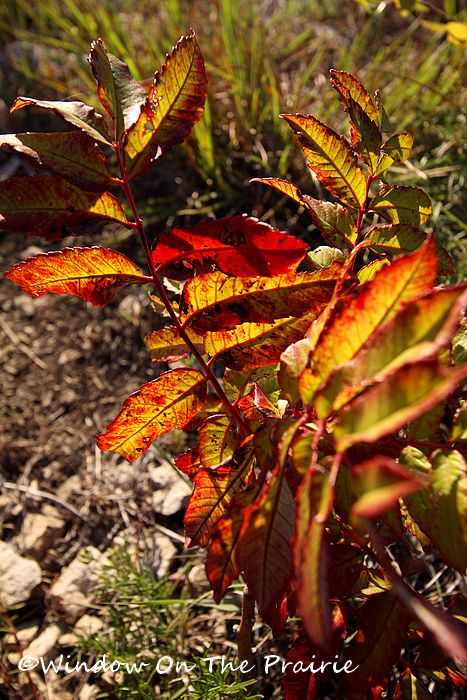 Well, looks like the sun is going down, and we have a couple hours drive ahead of us to get home, so we’d better get going.

But maybe a little rest first? 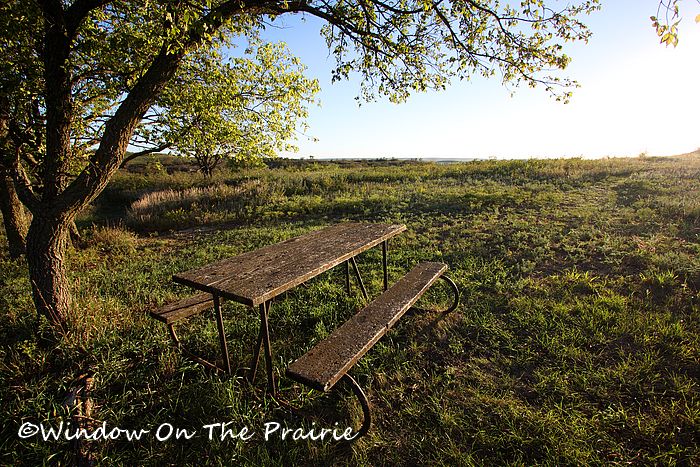 Let’s breathe in the remaining warmth of this early fall day. Winter is coming and we won’t see many more days like this one.