Remember this jelly making disaster? That was four years ago. Though I’ve longed to make jelly from wild plums ever since then, I’ve not had the nerve to do so.

This summer though, nature intervened in my feet-of-clay stance:  the plum trees we planted in the yard about 5 years ago produced a bounty of plums for the first time, and I knew I couldn’t just let all those purple little jewels drop to the ground and rot.

So I did some research online and found this wonderful blog post from Alicia over at Everyday Home Cook , describing how to make wild plum jelly, and I learned I made two mistakes last time – the plums weren’t ripe, and I cooked them like you would for fat juicy cultivated plums.  Unlike a standard recipe for plum jelly where you boil up said amount of plums expecting to get said amount of juice, wild plums have very little juice. So what you have to do is pick and boil up a lot of plums, straining off the juice from each potfull until you have the required amount of juice called for in a jelly making recipe. 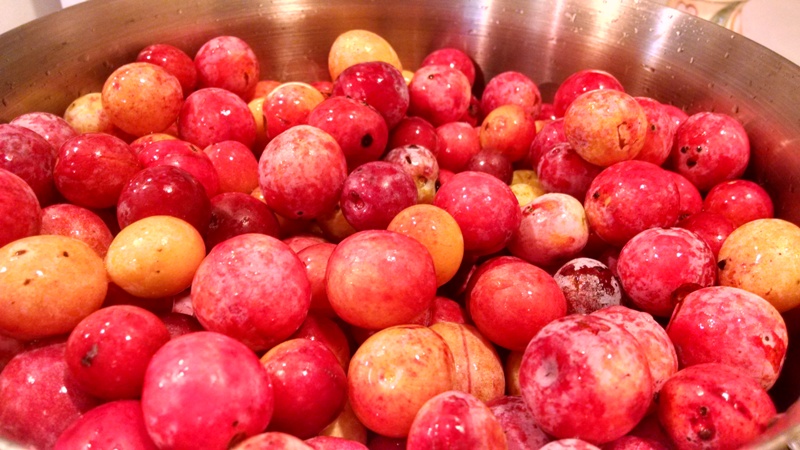 Some of them are purple, some red,and some are yellow.  They are much smaller than the plums you’ll find in your grocery store. 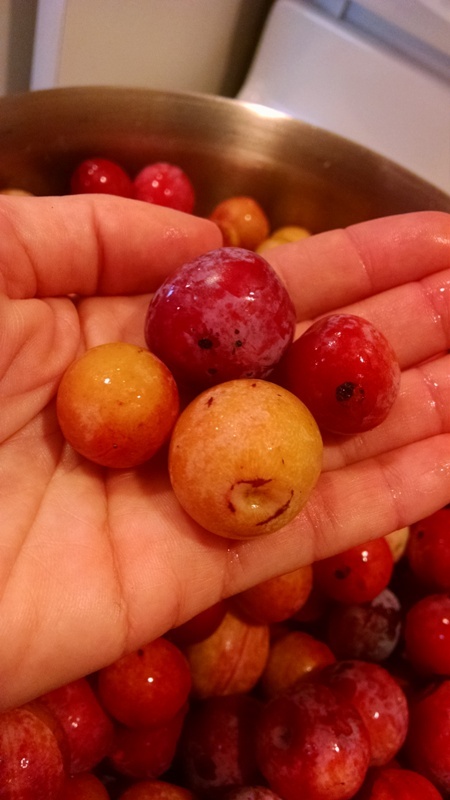 They are native to North America and were cultivated by Native Americans before the arrival of Europeans. Years ago we planted a row of them in our cedar windbreak as cover and a food source for wildlife. This year when I saw the limbs hanging down with their burden of fruit I set forth with a bucket in hand and hope in my heart that this time I would be able to make the longed for wild plum jelly.

Making sure the plums are ripe is important. If you grab hold of a little plum and it falls into your hand, it’s yours to keep. If it stubbornly holds on to the tree let it be until another day. Every few days I ventured forth to pick plums and then stored them in the fridge until I had enough to fill my biggest pot. Then I washed the plums, threw away any stems, and put them into the pot with about an inch of water. I slapped the lid on and brought them to a boil on high heat. I stirred occasionally and reduced heat as needed to prevent them from boiling over.  Finally the skins split and they were boiling in their own juice. 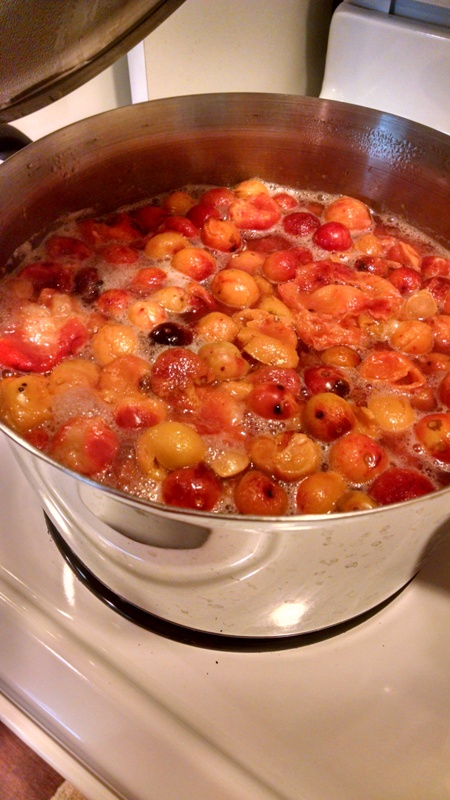 This took about a half hour. Then I removed the pot from the heat and strained the plums in cheesecloth. I poured the resulting juice into a lidded container and marveled at my success so far. I just had to share my joy with someone. Harland was not home though so I showed my bounty to Kitty: 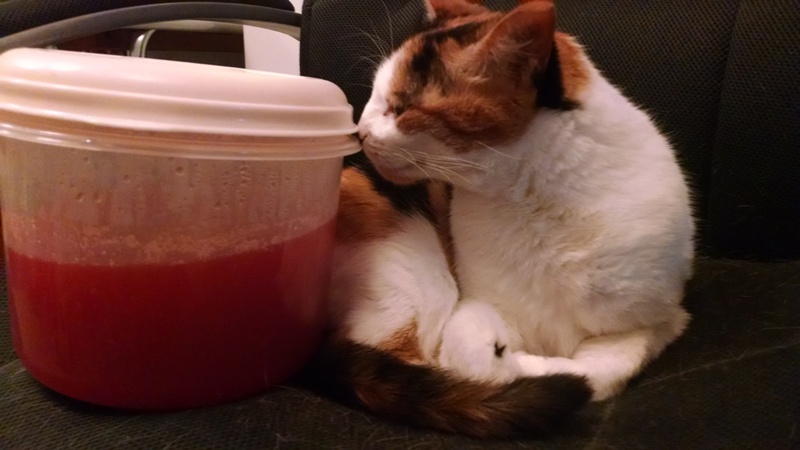 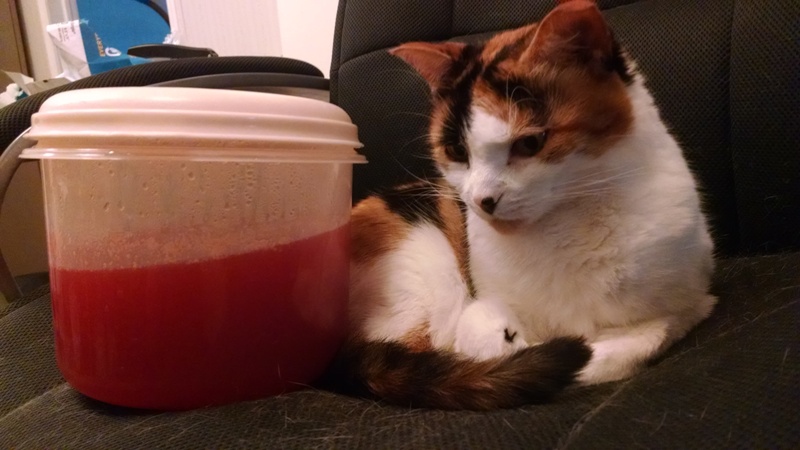 Nevermind. I was riding high on a cloud by now. I had decided to make jelly from a Sure-Jell recipe which calls for 5 1/2 cups juice. The recipe can be found on the paper insert inside the box. 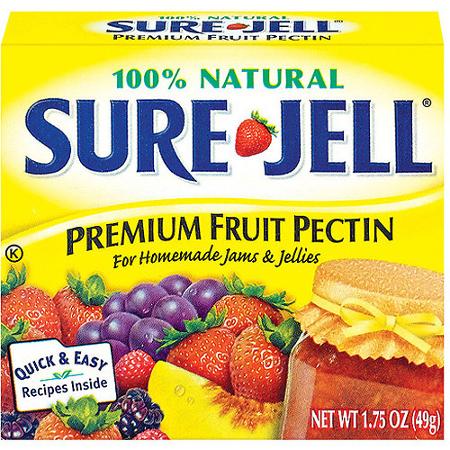 So I kept picking plums and boiling them up every few days until I had enough juice to make jelly. 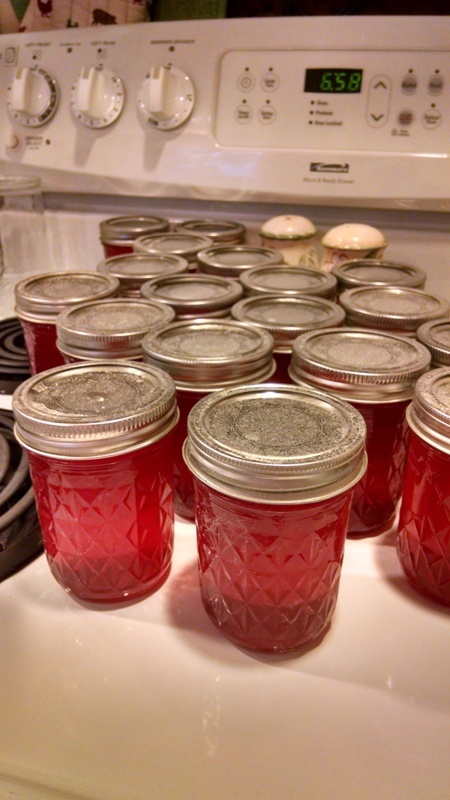 I just LOVE the color: 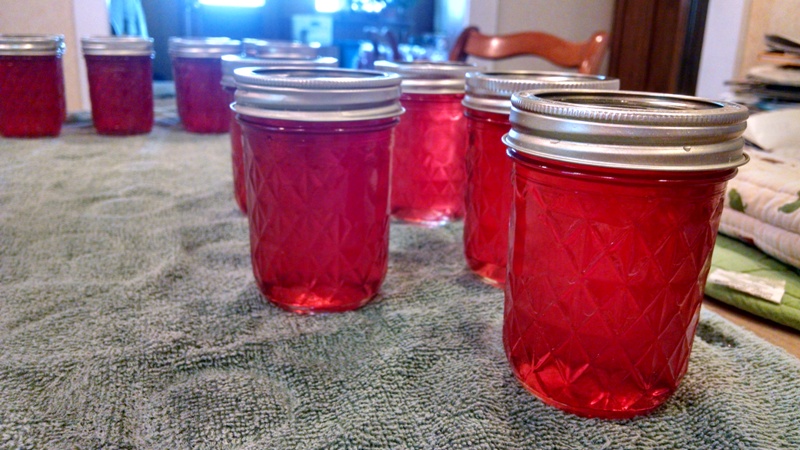 So pretty.  The flavor is very plummy and very sweet. Perfect. These will make nice Christmas gifts.

So there you have it. Don’t despair when your best efforts fail. When you DO succeed it will be all the sweeter.