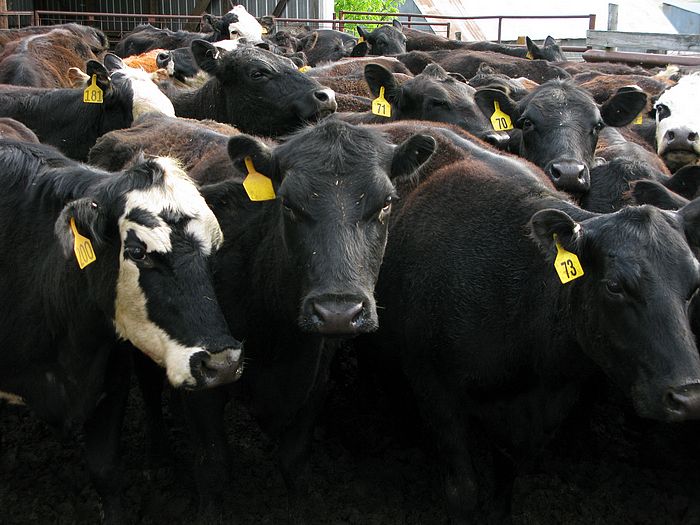 “Working cattle” is an expression that in our house means anything that is done to the cattle that they do not like, that we don’t enjoy doing, that can involve injury(either human or bovine), and is for the cattle’s benefit even though they don’t think so.   Every year about the 1st week of May, the majority of the cows have had their calves. During calving time we keep them nearby in the winter pasture. Because this pasture is not very big, by late spring they are running low on grass. So we round them up and move them to the large summer pasture. And while we have them rounded up, everyone gets some needed shots. The cows and calves have to be separated for the shots and the move. For them, is the most stressful part of the day. It sounds harsh, but it’s necessary as the cows do not react well to being worked, and in their stressed state, they may just accidentally step on, or worse, trample the small calves. It’s for everyone’s benefit to separate them, but just try telling them that.

First, everyone is rounded up into the sorting pen. Then the calves are separated from the cows, and put in a pen adjoining the cows so they can see each other. 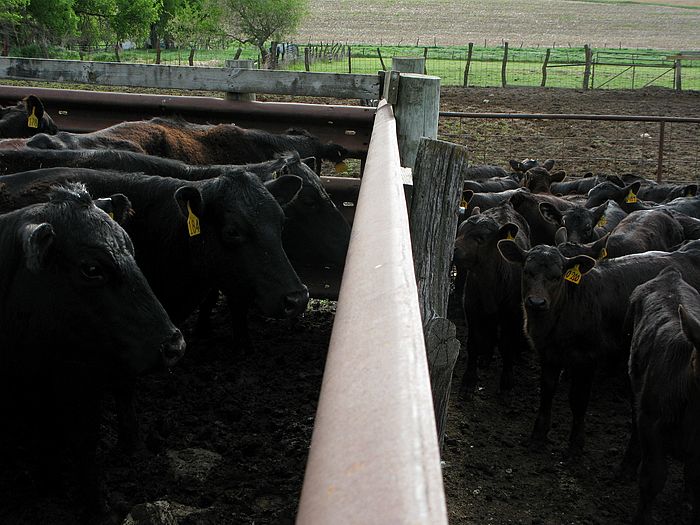 Next, the cows are run into the chute, a small group at a time, and given their shots. Because the calves are too small to run through our chute, we get in the pen with them and give them their shots.  Afterwards, we load the cows onto a hired semi trailer. 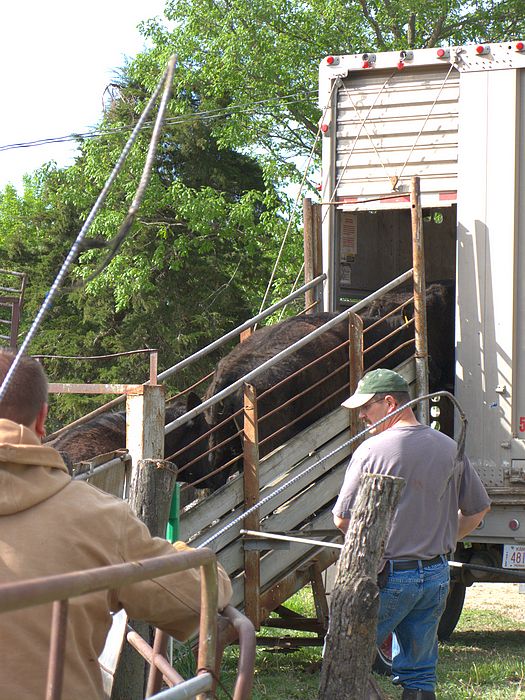 They are loaded a few at a time, and put in different compartments on the trailer so that the weight is distributed evenly. The calves are loaded onto our stock trailer. 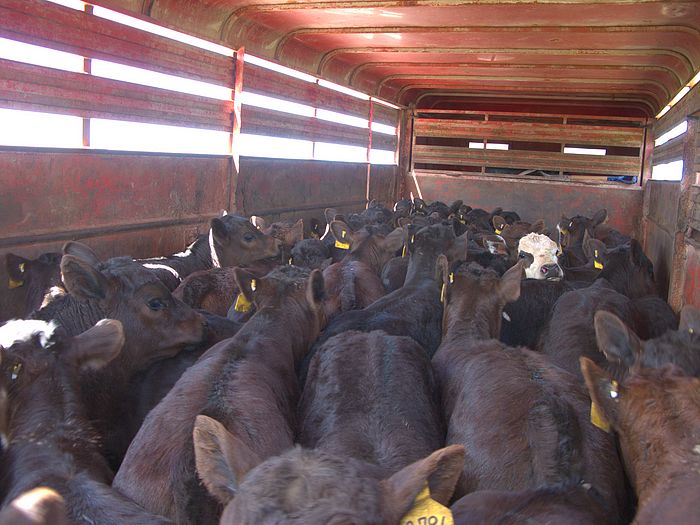 It looks cramped, but they’re ok. If they had a lot of space to roam, they might get injured on the trip. Harland and I pull the stock trailer with our pickup truck, and follow along behind the semi. When we reach the summer pasture, the cows are unloaded first. Unloading is a lot easier than loading. The truck driver simply opens the door, and they come down the ramp, happy to be out of the truck. 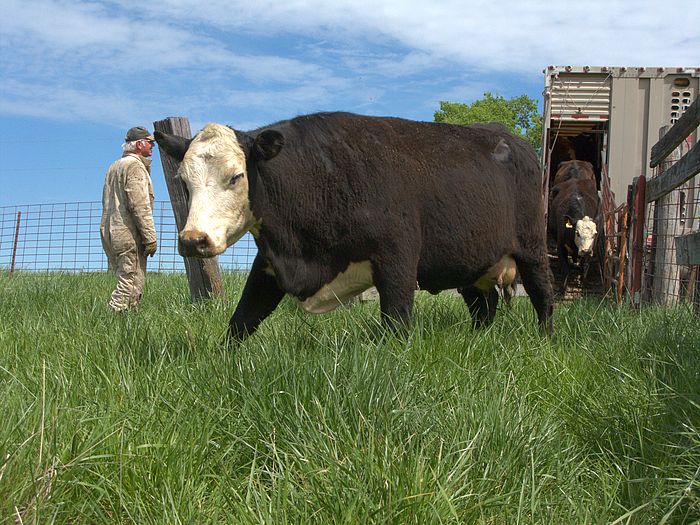 Cows have a very good memory, and they know where they are as soon as they step off the truck. 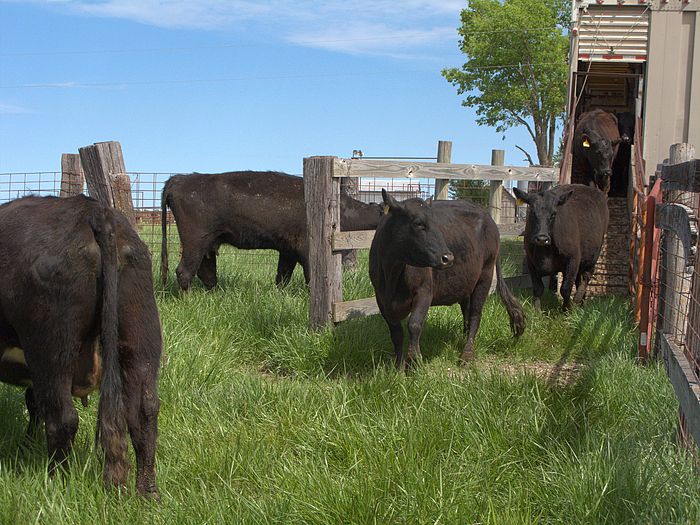 We unload them into a holding pen, otherwise they may forget their calves and run off over the hill. Once the cows are all unloaded, the calves are unloaded into an adjoining pen. 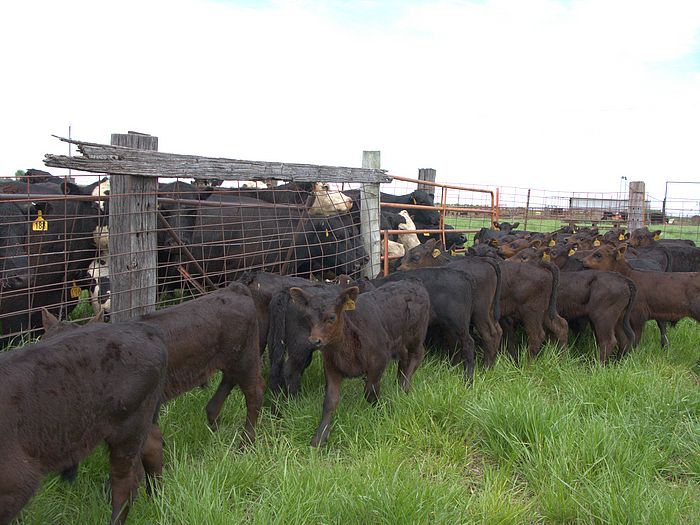 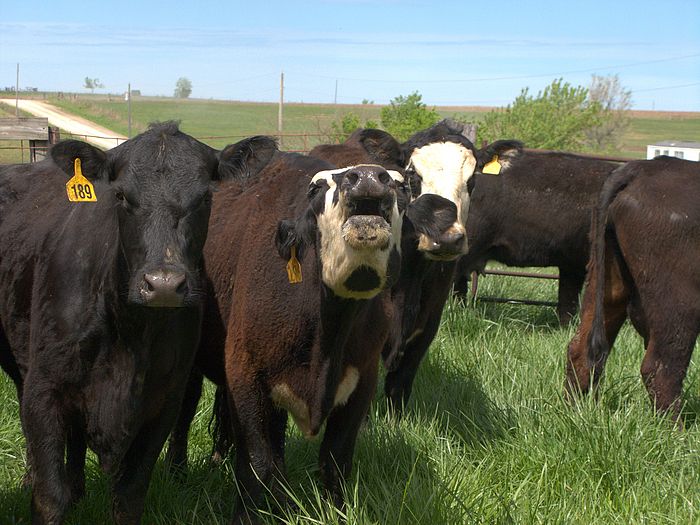 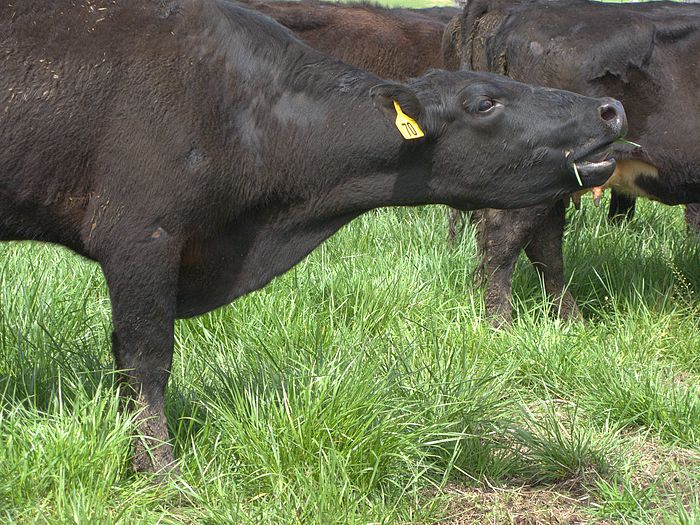 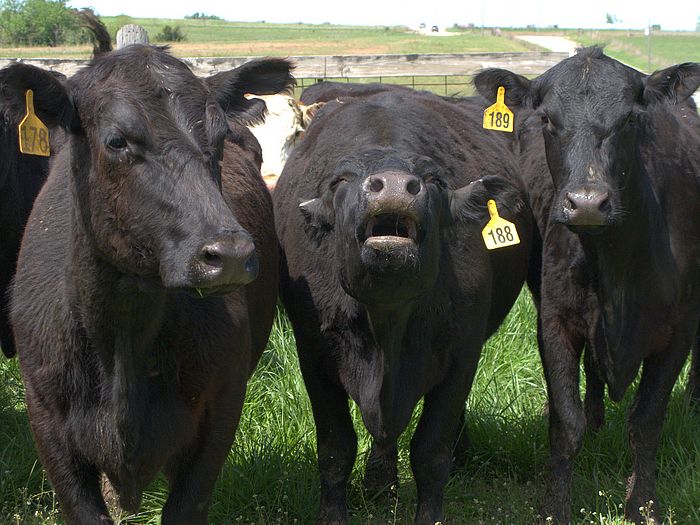 Upon finding each other, the calves nurse( a great relief to the cows as about 5 hours has elapsed since they were separated from their babies), everyone calms down, and the cows enjoy some of the lush green grass. 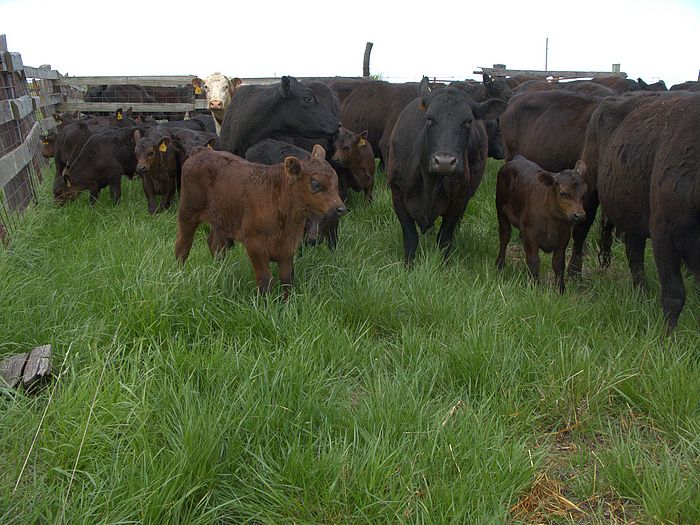 All this can take a while, so Harland and I take this opportunity to get some lunch. We leave them in the pen, and head to the nearest town. There is only one grocery store in town. Fortunately, it has a deli, and we usually get a chicken dinner. Then we drive to a nearby wildlife refuge, park the truck under a tree, say grace, eat, and enjoy the quiet. 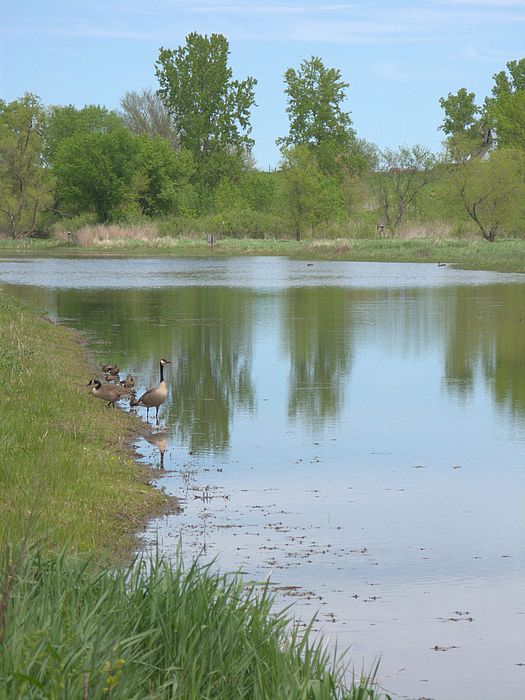 This time we had a pair of canada geese and some ducks for company.

After lunch, we head back to the pasture. By this time, everyone has paired back up and settled down, so we open the gate and let them out into the pasture. They head out across the pasture, and down into the valley. They are very glad to get away from us, 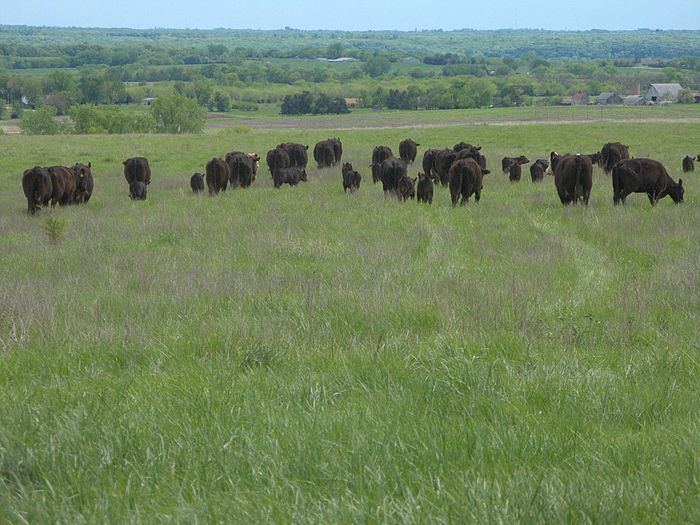 very glad to be out in the wide open space, 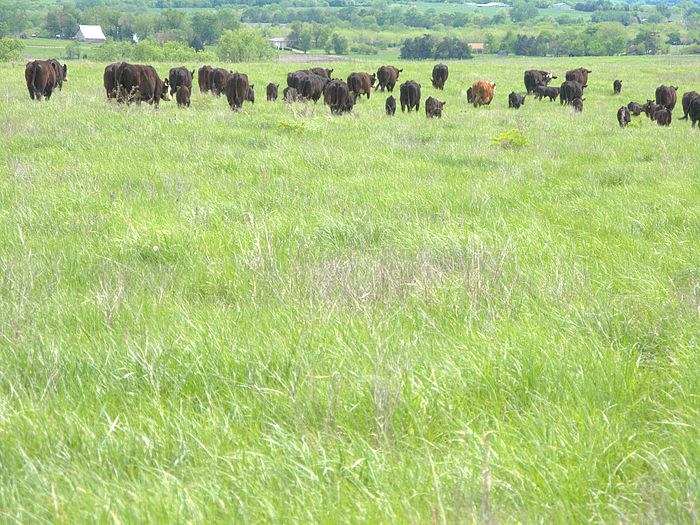 and very glad to have access to so much lush green grass. 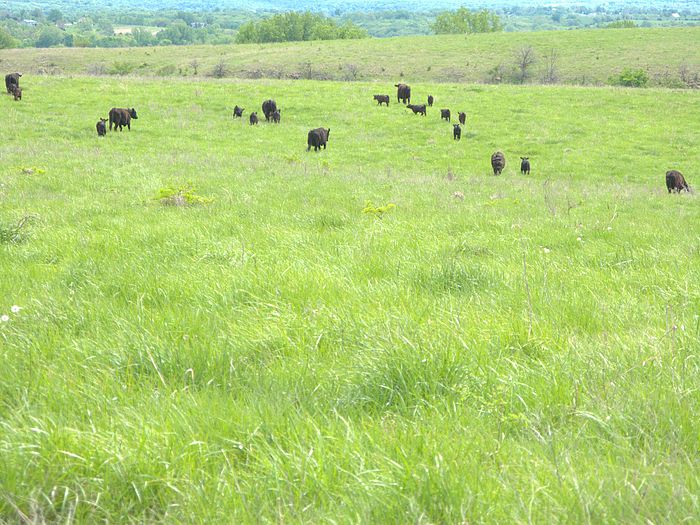 We watch as they they make their down into the valley and out of sight, 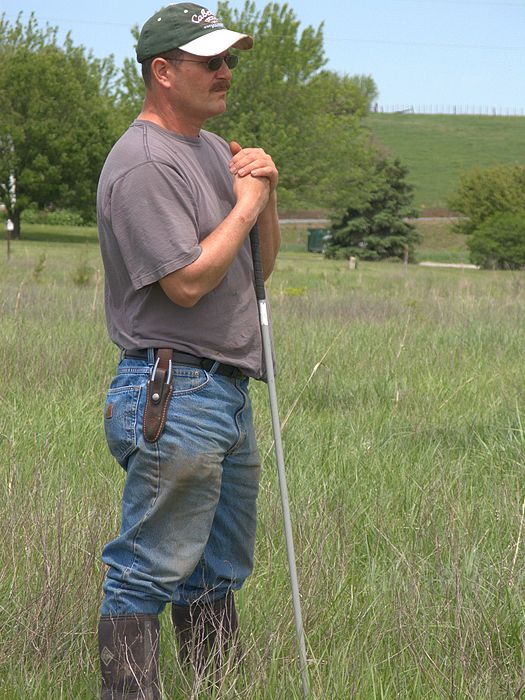 and then we head back to the truck, and go home. 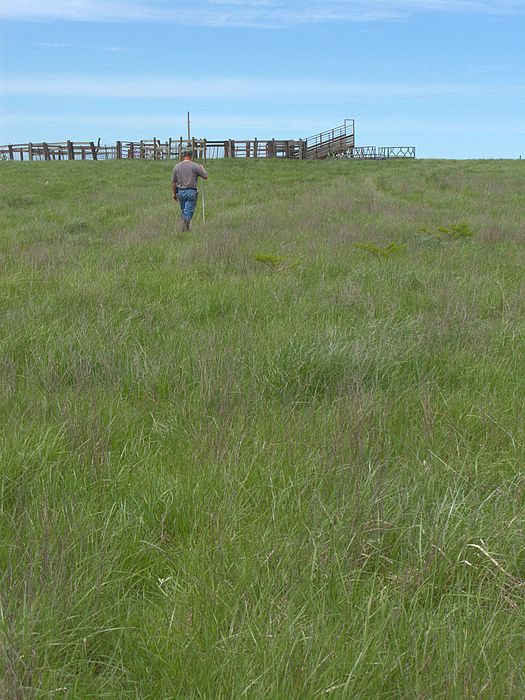 They will live here for the next 6 months. They will eat grass: a constant all-you-can-eat-buffet. They will lay in the shade of the trees, take a dip in the pond when it is hot, the calves will grow and play with each other, and enjoy their summer.  We will check on them regularly to make sure they are all ok, but they will basically take care of themselves. After all, it’s summer, and the living is easy.