Sunday started out as a very relaxing day. I was doing a little housecleaning, a little cooking, the birds were happily feeding outside our windows, and all was right with the world. 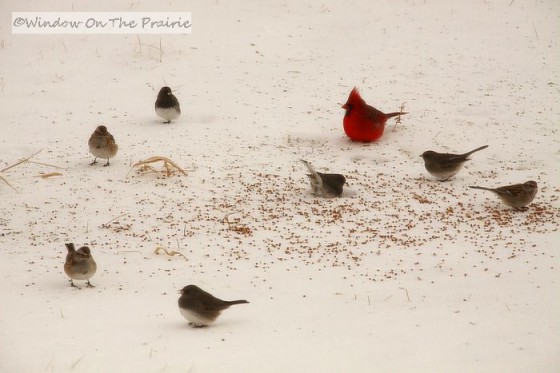 (The little gray birds with white tummies are juncos. They’re my favorites – so spunky and cute.)

In the early afternoon, I was cleaning the floors with our Swiffer Sweeper Vac. (By the way, I think this is just the best invention since penicillin.) I had swept the front room, and stepped outside to clean out the Swiffer filter. Kitty, our housecat, illegally hopped outside behind me. Kitty is not allowed out because she has a bad habit of going straight for the road and trying to get run over. I told her to get back inside, and she turned her butt to me with a “la la la, I can’t hear you” attitude. So I gave up and closed the door thinking she would get cold and want to come back in soon enough (It was 11 degrees that day.) She hates to step into the snow so I didn’t figure she would go far.

I proceeded to sweep the kitchen and bathroom floor, and when I headed back outside to clean the filter again, I saw her sitting up against the door. “Aha,” I thought. “She’s cold now and ready to come in.”  I opened the door and she bolted in – with something stuffed in her mouth!

A BIRD!!!!  She ran through the front room and into the living room with me in hot pursuit yelling, “NO, NO, NO!!!!”  As she headed for the office I yelled out to Harland, “STOP HER, STOP HER!!!”

She ran past him, into the bedroom and under the bed. Harland and I got down on the floor near the bed, he on one side, me on the other. She was closer to me, so I grabbed her by the scruff of the neck and pulled her out. I continued to hold onto her by the scruff, and she finally let go of her prize, a little gray and white junco. I thought it would drop to the floor dead, but instead it flew through the bedroom into the bathroom and began beating itself frantically against the window trying to escape our little House of Horrors. 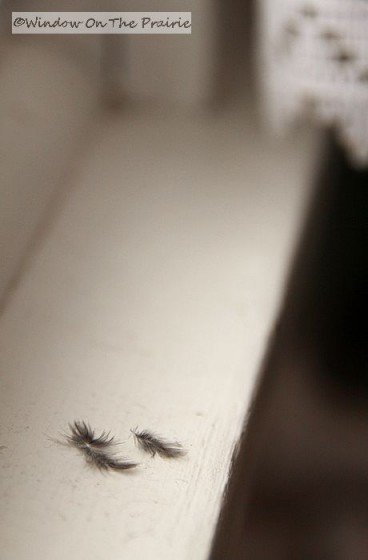 While I took Kitty and stuffed her upstairs closing the door on her, Harland captured the terrified victim with a t-shirt. I opened the front door, and he gently opened the shirt. The little bird flew away and landed in a nearby bush. I watched for a while and it seemed to be ok. Then I released Kitty, who promptly went back to the bedroom looking for her prize. All she found were feathers. I cleaned them up, some of them were stuck to her face, and chastised Kitty. Later that night we had a heart-to-heart talk.

Me:  Kitty, do you know how wrong it was trying to kill that helpless little junco? You have enough to eat and don’t need to catch game.

Me: Kitty, this is serious, we’re talking 2nd Degree Attempted Birdslaughter. If you’re caught, that’s 15 years in the slammer and a $10,000 fine. 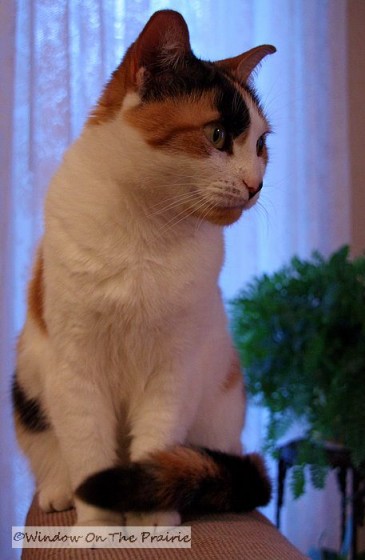 Me: Granted, doing the time would be easy for you – all you do is sleep and eat anyway. 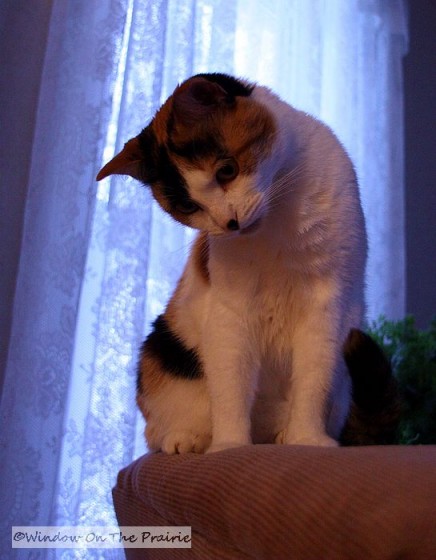 Me: And where are you going to get money to pay the fine? You don’t even have a job. 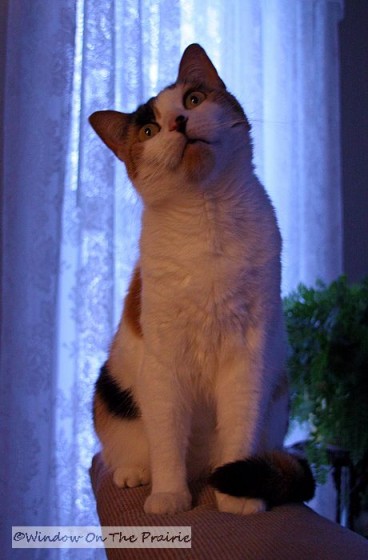 Kitty: When did we get that ceiling fan? Looks nice.

——-> UP NEXT:  Au Gratin Potatoes from an 1894 recipe. Old fashioned home cooking comin’ right up. 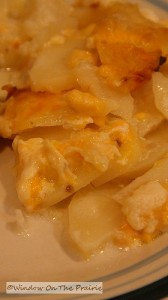 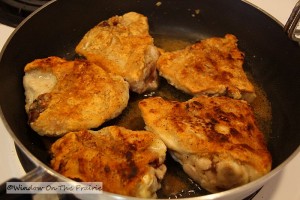