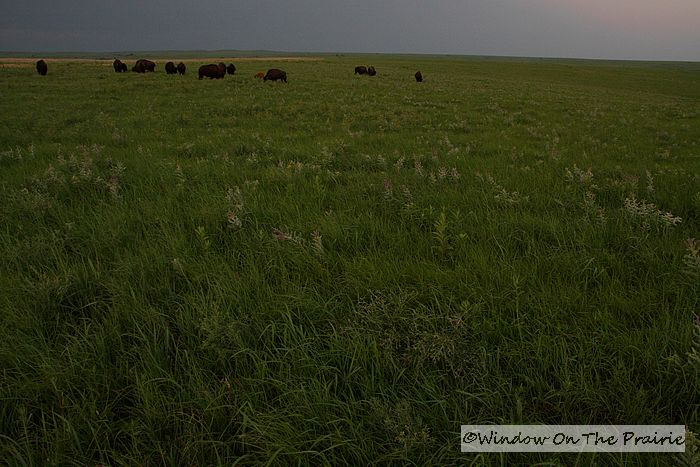 Recently, Harland and I paid a visit to the Tallgrass Prairie National Preserve in east central Kansas. We go there several times each year to see the nearly 11,000 acres of native grasses and wildflowers and to take lots of pictures. In October 2009, Tallgrass brought in a new reason for us to visit the preserve: a herd of bison. Thirteen head were brought in from the Wind Cave National Park in South Dakota.  On Mother’s Day 2010, a bison calf was born – the first calf to be born here in over 140 years. This May, a second calf was born, and 2 more are expected this summer. The plan is to grow the herd to 75 – 100 head. During a visit last summer, we caught sight of the herd from a distance and were thrilled. This year during our visit, I was hoping to see the herd a little bit closer.

So on a late afternoon a couple weeks ago, we walked the trail into the preserve under a stormy sky.  After a couple miles walking, we had not seen the herd, and were considering giving up when Harland caught sight of some dark objects on the western horizon. It was the herd about a mile away. We adjusted our camera backpacks, took a deep breath, and hiked toward them. As we approached, they looked at us each in turn, and then continued grazing. 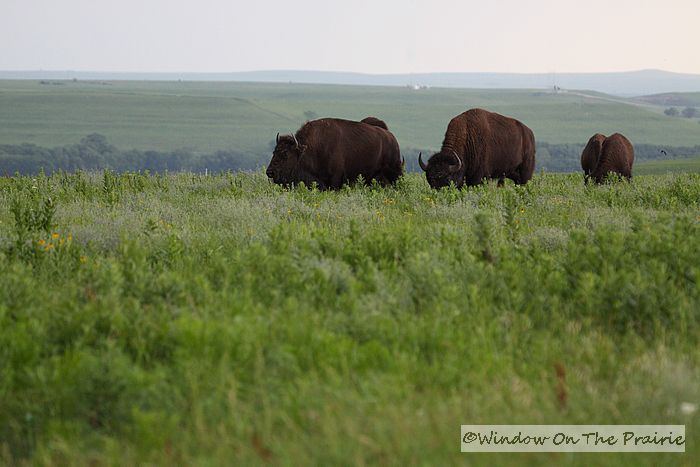 We stopped. They moved closer. 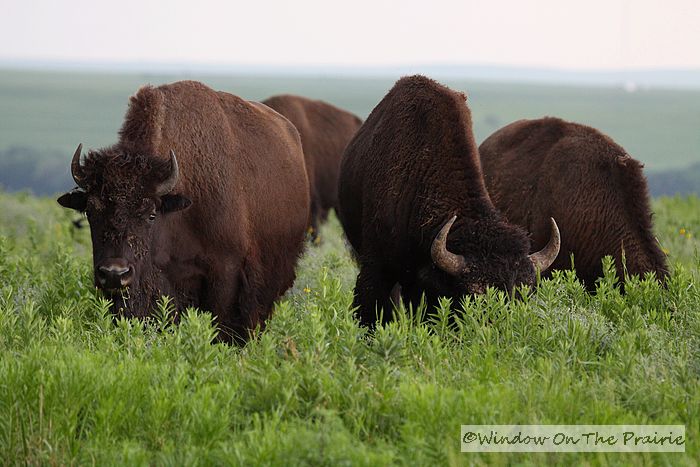 A storm skirted to the north of us with frequent bursts of lightning flashing across the sky. Harland moved some distance away, set up his tripod and began to take pictures of the lightning.  I stayed where I was watching the bison. After a half hour,much to my surprise, the herd drifted towards me.  They seemed curious and looked at me thoughtfully. 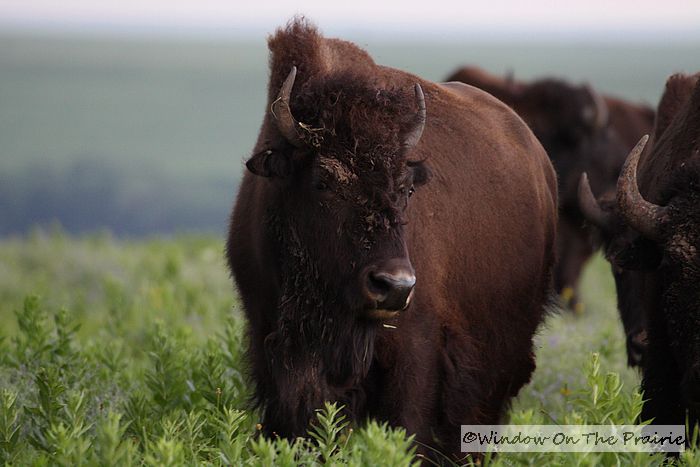 As they continued to graze their way towards me, the herd split, half on one side of me,

the other half on the other side. 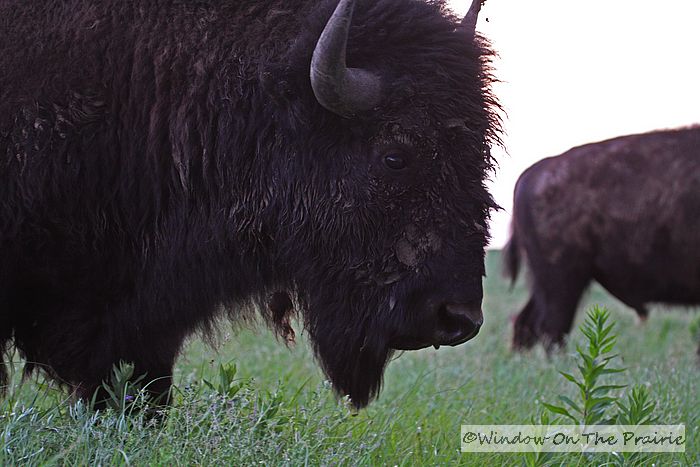 I was thrilled, and a little scared. I was a bison sandwich with the nearest one only about eight feet from me. 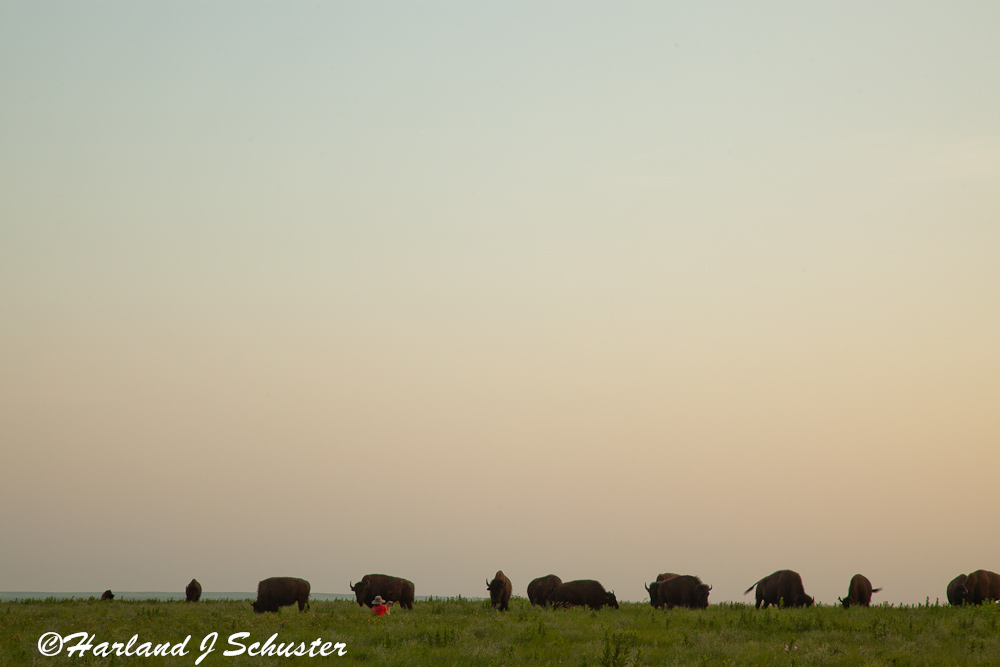 That’s me in the red shirt sitting on the ground.

Males weigh in at about 2000 pounds and stand about 6 feet at the shoulder. Females are 1000 pounds and 5 feet.  Both have horns. 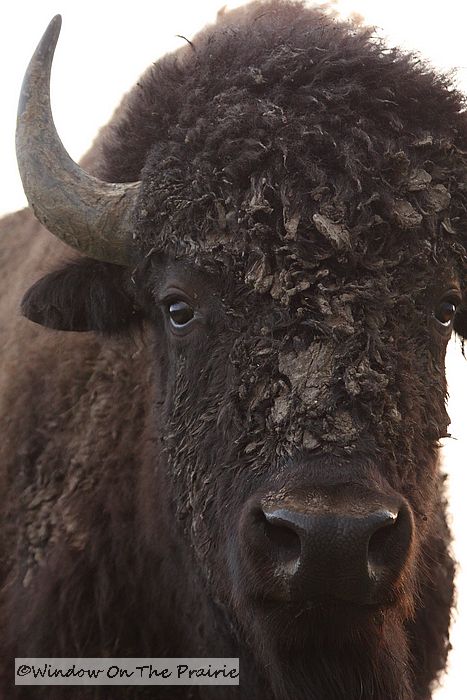 They surrounded the baby calf most of the time, but I caught glimpes of it between their huge shaggy bodies. 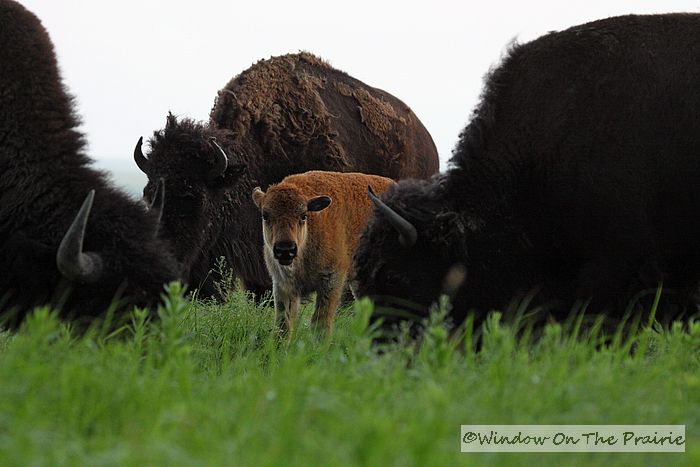 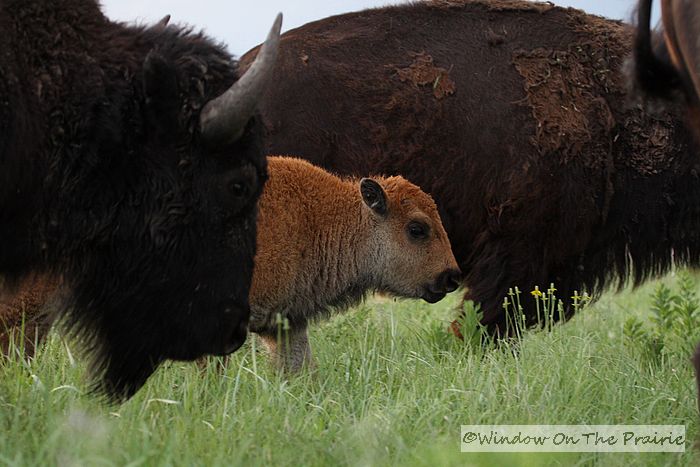 Mama rested her chin protectively over her 1 month-old. 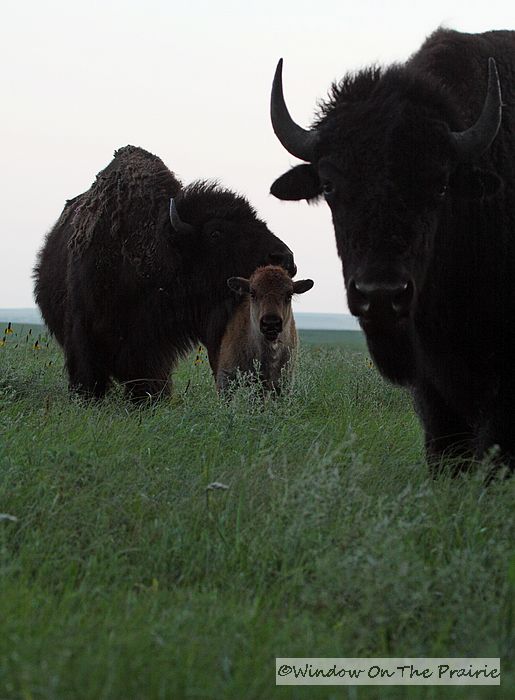 While they expressed little or no concern about me, I finally became nervous and backed some yards away.  They followed.  So I walked even further and finally they drifted away from me leisurely grazing on the endless supply of native grasses.

Harland crouched down into the grass and took some pictures of them too. 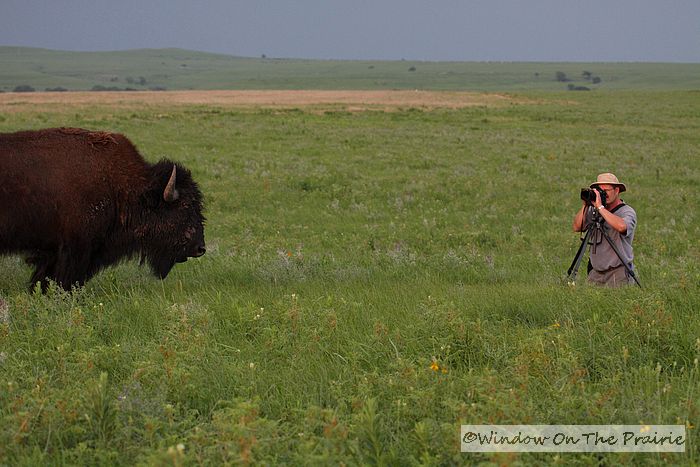 The sun set. The storm to the north moved further away. There was too little light to take any more pictures. In the twilight, the herd lay down to rest and take dust baths.  One drank from a puddle on the trail.

Harland and I packed up our camera equipment, said goodbye to the bison, and hiked the 3 – 4 miles back to the truck. It was nearly dark as we reached the end of the trail. Lightning bugs flew around us. We heard the surprised snort  of deer start at our approach and bound away.   It was after 10pm when we reached the truck. We were tired and sore. But as we drove home in the darkness my mind kept drifting back to the prairie and bison grazing around me. Was it real? I kept repeating to Harland as we drove along,

“I was surrounded by a herd of bison.”

————>  Friday: More pictures of the Baby Bison:  the close bond between her and mama, and close up shots of baby by herself. Plus a video.