Time To Bale The Hay 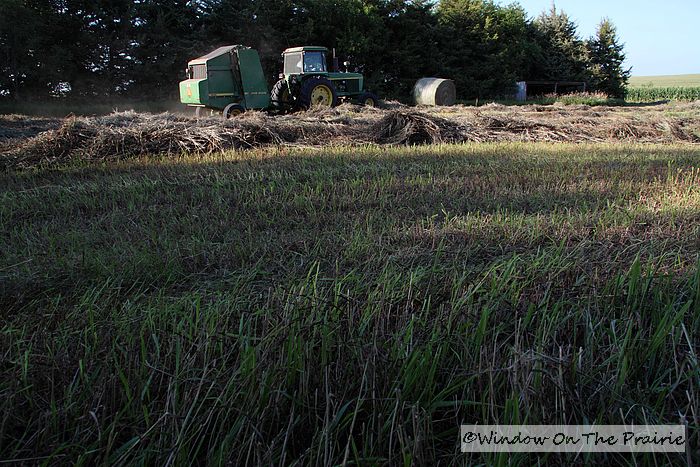 When we last left Harland, he had been cutting the hay. Two days later, after curing in the sun, it is ready to be baled. Harland unhooks the mower from the tractor, and hooks up the baler. The baler is pulled around the field over the windrow of hay left behind by the mower. 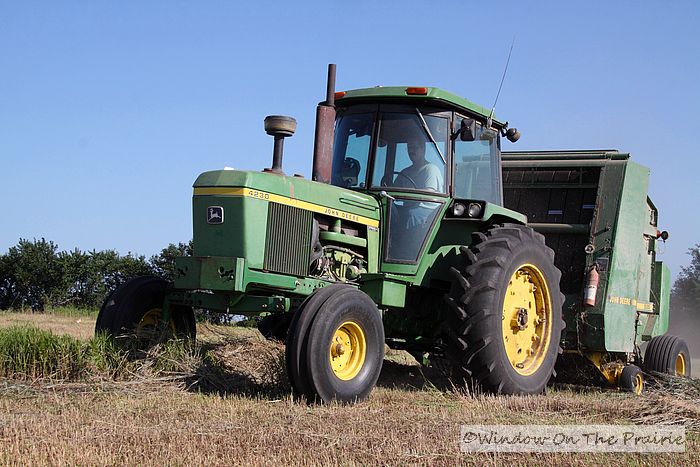 The windrow is pulled into the baler by a drum with teeth positioned at the bottom front of the baler. As it is pulled in, large belts compress and wind the hay into a bale, much like the way you would wind up a roll of toilet paper. Hydraulic pressure on the belts squeezes out the air and forms a tight bale. When it reaches full size, 1500 pounds and about 6 feet in diameter, a beeping indicator inside the tractor informs Harland. He stops the tractor, puts it in reverse, and drives slowly backward. Plastic net wrap is wound around the hay bale inside the baler. The wrap will hold the bale together. Finally, Harland flips the lever inside the tractor, lifting up the door of the baler. The newborn bale drops out onto the ground.  Harland flips the lever again to close the door, and then he starts forward again driving over the windrow collecting more hay into the baler starting the process all over again.

Here’s a short video of Harland working in his “office”.

Next winter, this hay will be fed to our cattle. About 300 bales are needed to keep them fed through the winter. Click here for a post from last winter in which Harland feeds a couple bales to some hungry cows.

Tags: baling hay in kansashay balingTime To Bale The Hay