Sunday morning, Harland and I got up at 4am, dressed hurriedly, and left our hotel in Elkhart in the dark. Tee hee – I felt like we were trying to get out of paying a bill. But no, we were off to watch Lesser Prairie Chickens. 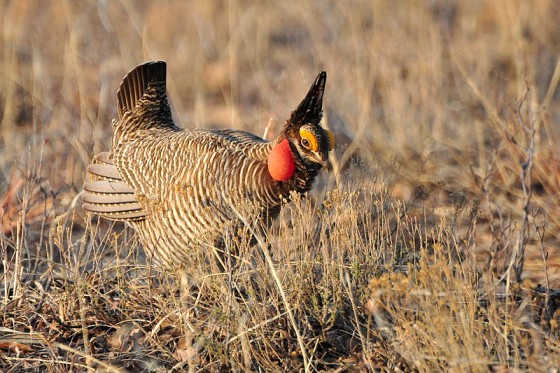 We’ve watched Greater Prairie Chickens many times, but have never witnessed the mating dance of the Lesser.

After about an hour, we heard cackling and whistling – the chickens had arrived. We could hear them stamping their little feet in the sand right outside our blinds, and we were excited for the pre-dawn light to increase so we could begin taking pictures. More and more of them flew in and we could tell there were probably between 6 to 8 of them dancing around in the dark. I peeked out and could just see a male off to my left puffing out his red-orange neck sac in the grey dawn. It was getting close to where we would be able to take pics – 10, maybe 15 minutes to go.

But then I heard one of the birds fly away off to the north. He’ll be back, I thought. But then another flew away….and another….and then several at once.  And then it went quiet, except for the wind.  They were gone.

I listened for a while, hoping they would come back.  I called Harland on his cell over in his blind. We decided to wait another 15 minutes or so. But they never returned. We crawled out of our blinds and packed up in silence.

As we began to walk back to our truck, the sun peeped over the horizon and highlighted the desert plants bathing everything in a warm orange glow. 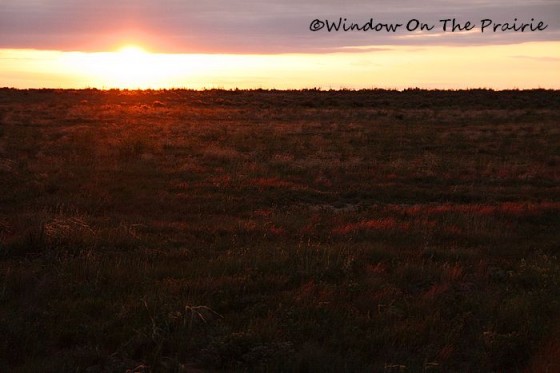 Harland looked off into the distance. 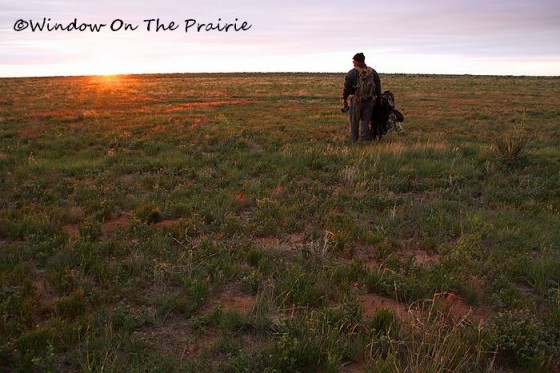 We could hear the chickens cackling far away. It sounded like they were laughing at us. I couldn’t help but think about how nice the light would have been for taking pics of the now-departed chickens. Then the sun quickly slipped behind a cloudbank. We walked back to our red truck. 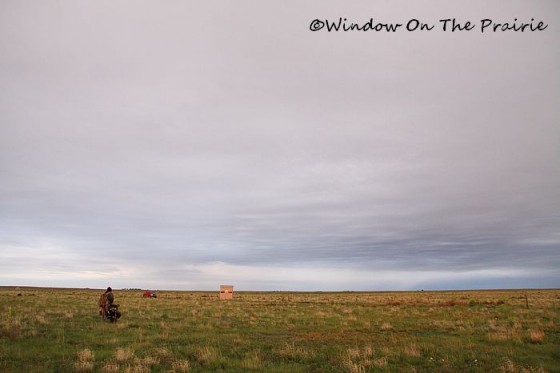 Once there, I consoled myself over the loss of the chickens by taking pics of wildflowers. The yucca was just starting to bloom. 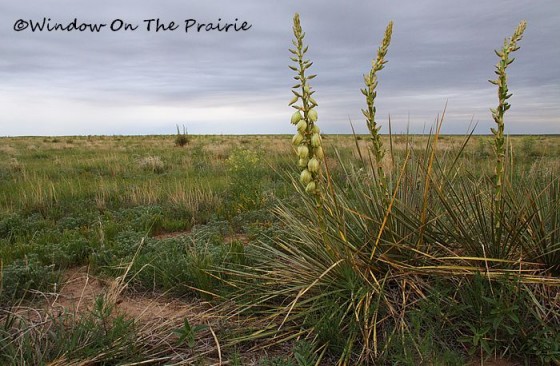 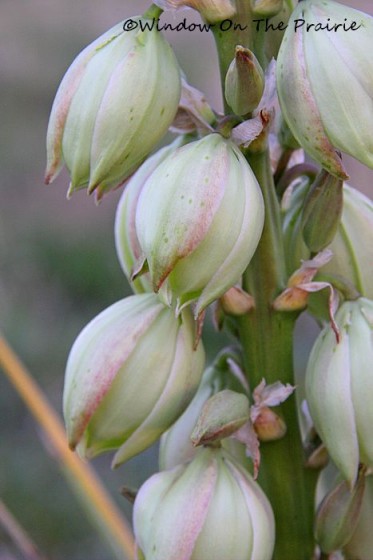 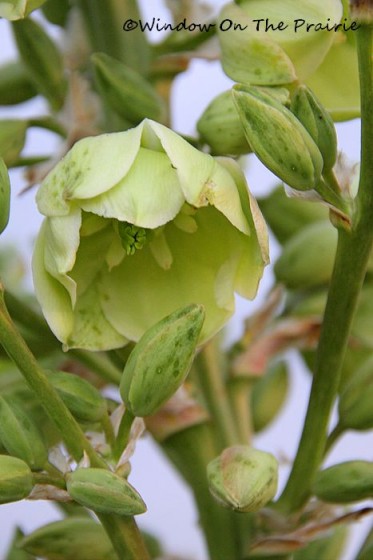 Beyond the yucca there is a perfect example of a dejected Harland. 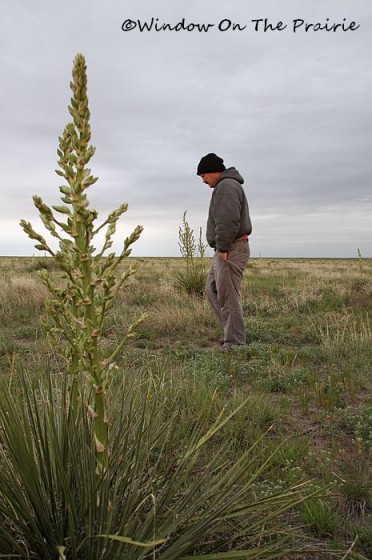 Oh dear….it’s a bad case of the gloomies.

Back to the flowers: This is a Pale Evening Primrose with a passenger. 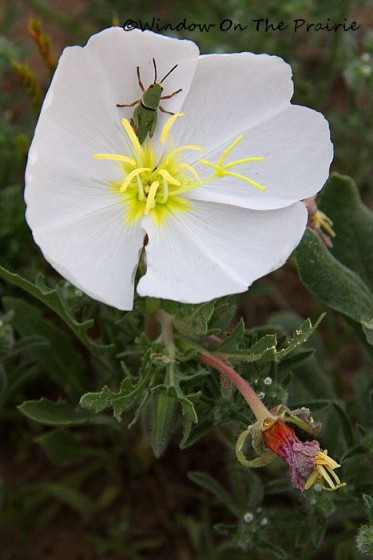 Don’t know my bugs well….but he looks like a grasshopper of some sort.   Anybody have a clue as to what he might be called? 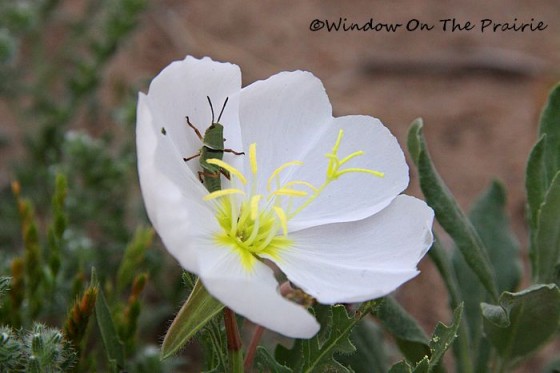 This one is scarlett globe mallow. 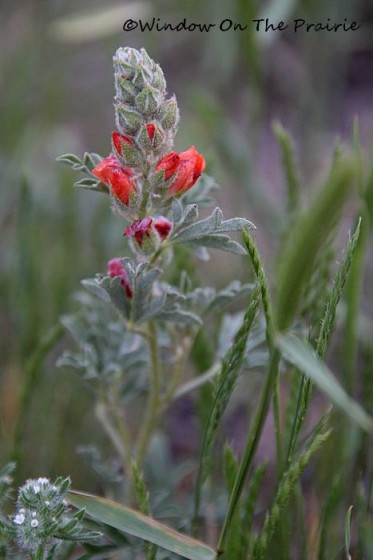 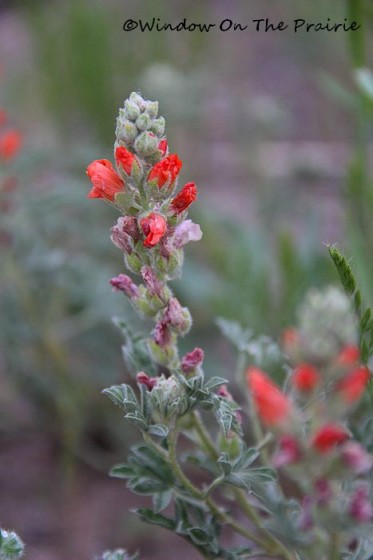 I have no idea what this tiny white flower is. 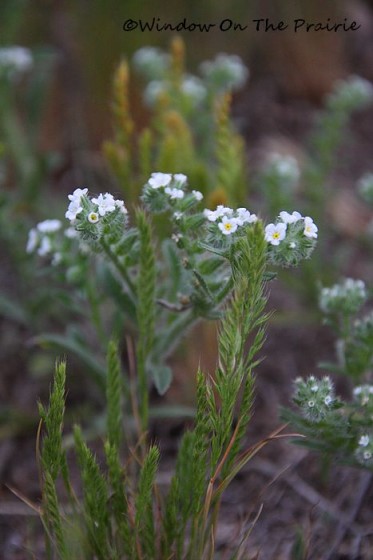 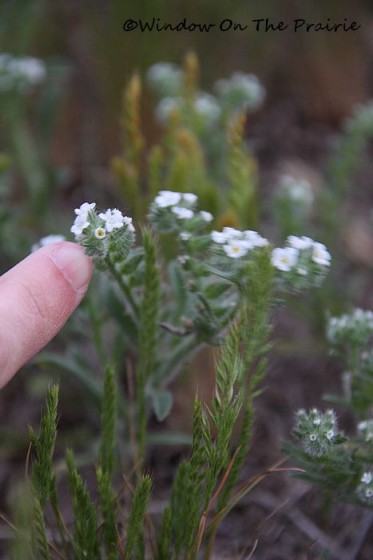 Anybody know what it’s called?

UPDATE:  A friend of mine (Thanks Phyllis!) knows what the little white flower is:  Thicksepal Cryptantha

Never had an opportunity to take pics of any of these wildflowers before. Southwest Kansas is stark and flat and dry by comparison to our northeast corner where it is hilly and green. But I like the blue grey of the sagebrush. And the red sandy soil. And the skies so large you can watch a storm approach for an hour before it ever reaches you. You can see 10 miles in every direction.

I tried to console Harland by telling him that at least we were able to see and hear the chickens in person – we just didn’t get any pics to prove it though. He cracked a smile. One day we’ll get to see the Lesser Prairie Chickens again, AND hopefully get pictures. In the meantime, take a look at this video to see and hear their antics.