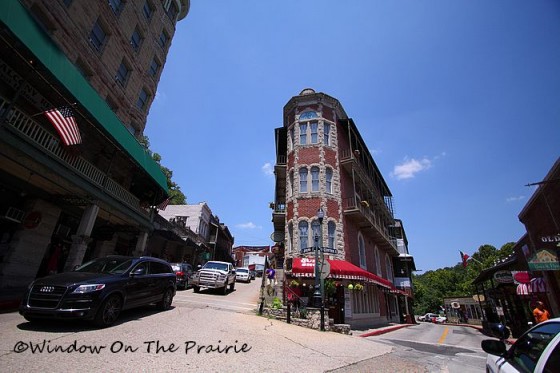 Earlier this week Harland celebrated his 29th birthday….again, and he wanted to go somewhere for the weekend. He originally wanted to go to western Kansas, but the forecast was calling for temps of 105 degrees F and winds of 30 mph.  He stressed to me that it was a dry heat though.

Then I suggested we go someplace cooler and save western Kansas for later. So he pondered for a bit and then decided he wanted to go to the Arkansas Ozarks where there is shade, water and no wind. We decided to visit Eureka Springs, a town founded in the late 19th century due to its abundance of cool mineral water springs.

The springs were thought to have health benefits and so in the 1880s the town grew in popularity as a health resort and place of retirement for the wealthy. Many bathhouses, hotels, and large gracious houses were built. In 1882, the railroad came to town boosting the numbers of visitors but also encouraging commercial industry as well. By the turn of the century, Eureka Springs had reached the apex of its popularity.

But in the early 1900s, advances in modern medicine meant a decline in the popularity of the mineral springs. Then the Depression took a heavy toll as well. But in the mid 1900s, auto-tourism began to bring visitors back to enjoy the fresh air of the Ozarks, and live a simpler, less expensive way of life. The town also became a favorite of artists and writers. And in 1970, the entire town was placed on the National Register of Historic Places.

Last Sunday, we spent the day wandering the narrow streets. We left our car at a park and ride and hopped on and off the “trolley” all afternoon. 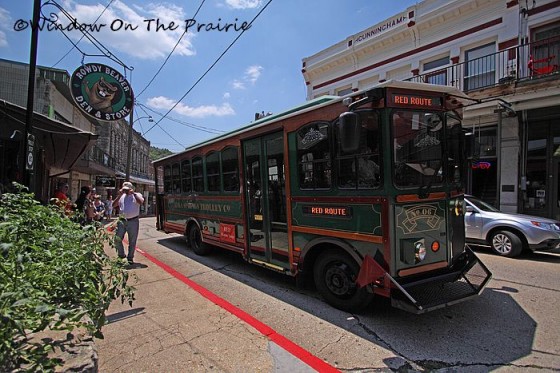 The area is very hilly so the streets wind around and over the hills. The buildings, most of them built around the turn of the century are made of limestone or brick. The sidewalks are made of large well-worn limestone slabs. 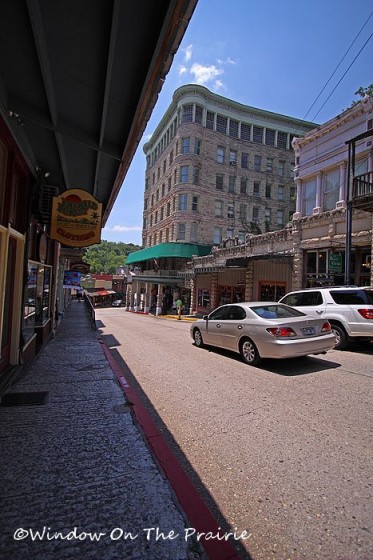 Atop the highest hill in town sits a large luxury hotel, the Crescent, built in 1886. 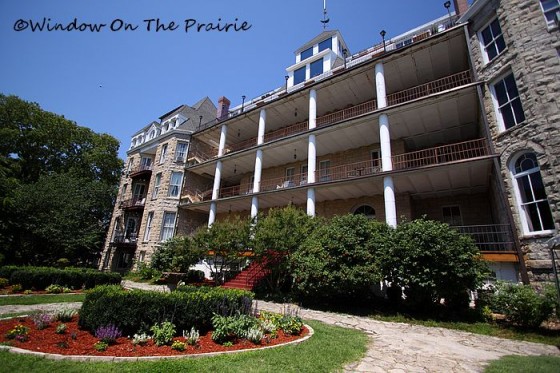 Check out the underside of the awning at the front door: 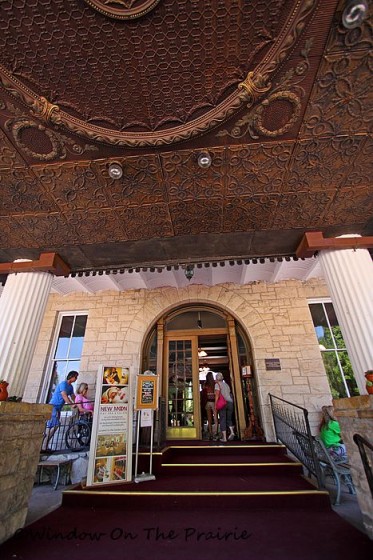 Harland stopped to rest and check out the map before we hopped back on the trolley. 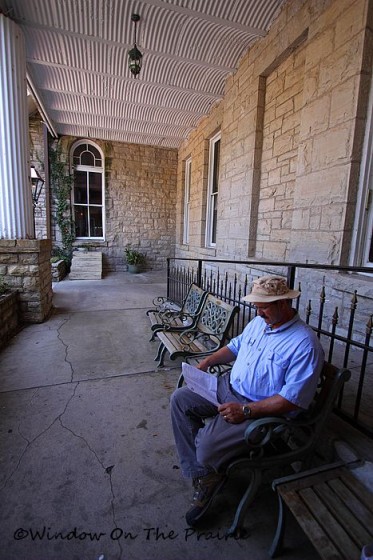 Just down the hill from the Crescent is St. Elizabeth of Hungary Catholic church, built in 1909. 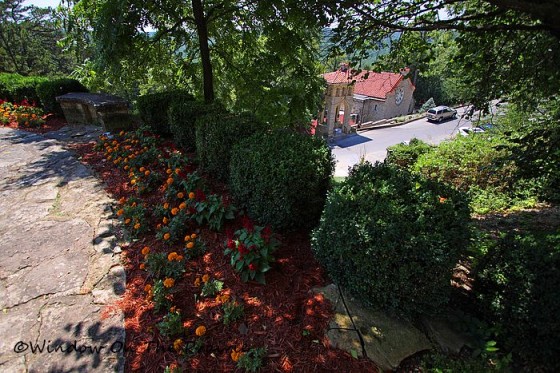 Because the church, like many of the buildings in town, is built into a hillside, visitors enter the church through the belltower looking down on the church roof, and as they walk down the sidewalk alongside the church, they gradually reach the front door at ground level. You can view more pics of the church by clicking the link above.

Next, we walked up and down the town’s streets admiring the quaint buildings and shops. 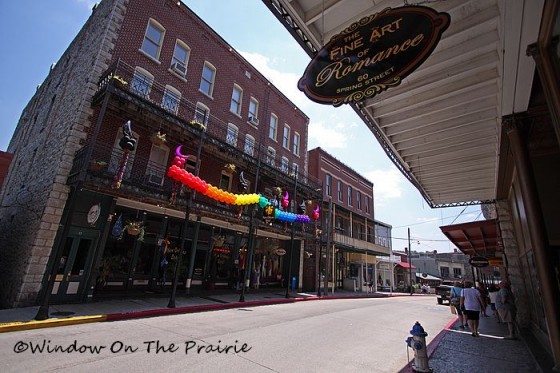 In the picture below is my favorite building. The road forks, and in between sits a narrow tall brick and stone building, just the right size to fit the narrow space. 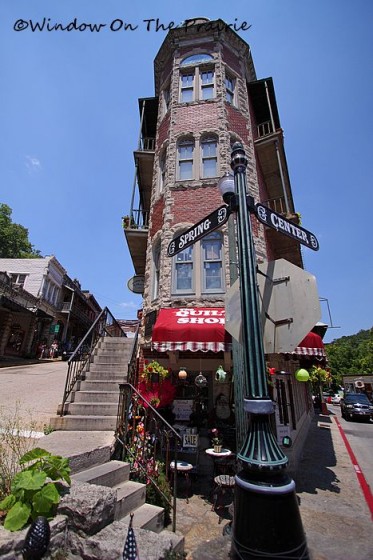 Where to next Harland? 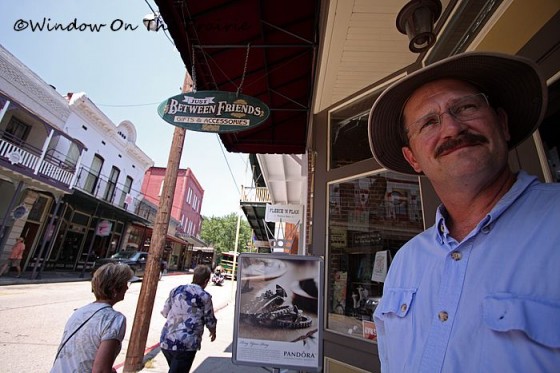 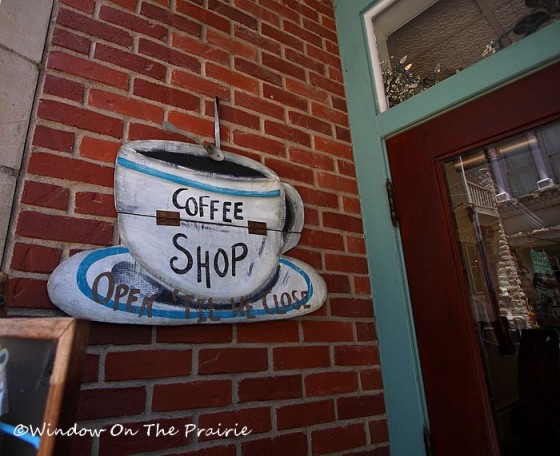 No no…it’s too hot for coffee. 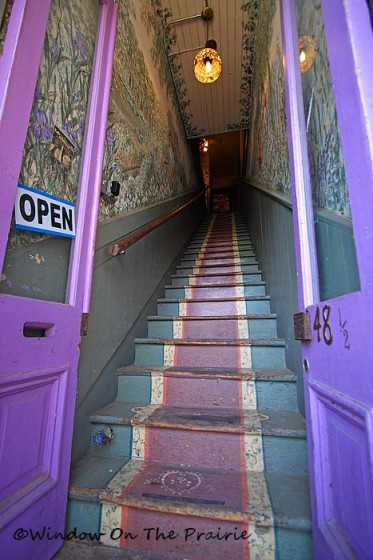 Oh, that’s pretty. We could paint our staircase at home like that. Except for the purple. 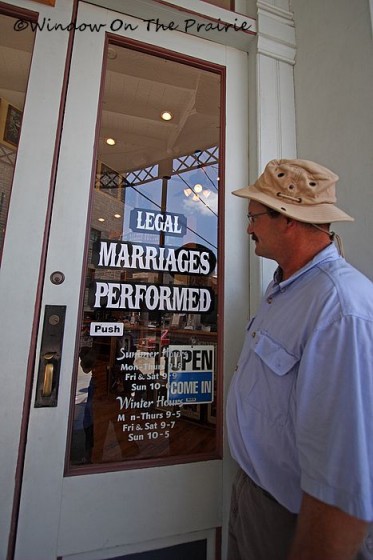 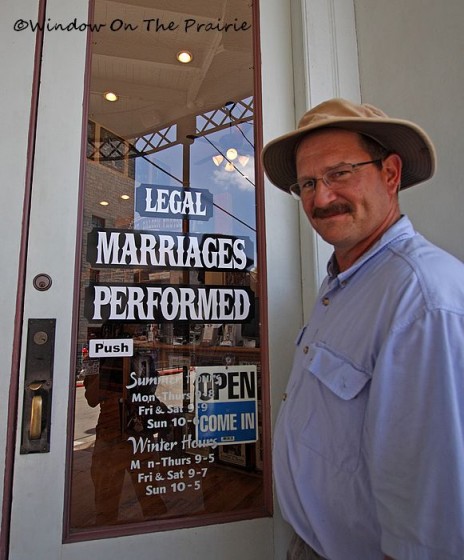 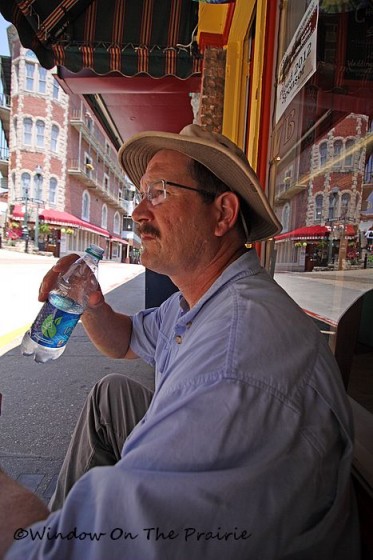 Decide what you want yet? 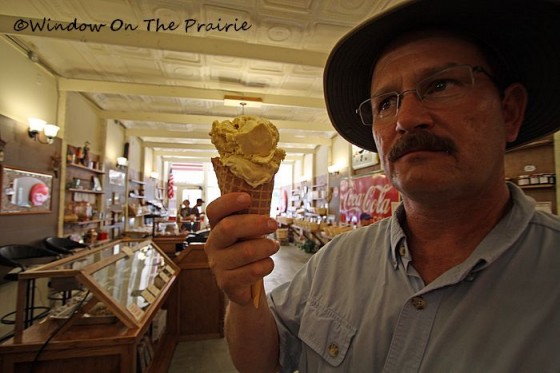 Mmmmmmm…..two scoops of banana ice cream in a homemade waffle cone. And I’ll have a chocolate peanut butter malt.

Perfect way to finish off our visit to Eureka Springs.

For more information about this lovely town and its history, click HERE.