Last week Harland and I made an early morning visit to Squaw Creek National Wildlife Refuge. It’s a busy time of year there with many species of migrating birds passing through. This week I’ll share all the different birds we saw with you.

Up first, is one of my favorite birds, the American Coot, also known as the Mudhen.

The American coot (Fulica americana), also known as a mud hen, is a bird of the family Rallidae. Though commonly mistaken to be ducks, American coots belong to a distinct order. Unlike the webbed feet of ducks, coots have broad, lobed scales on their lower legs and toes that fold back with each step in order to facilitate walking on dry land. 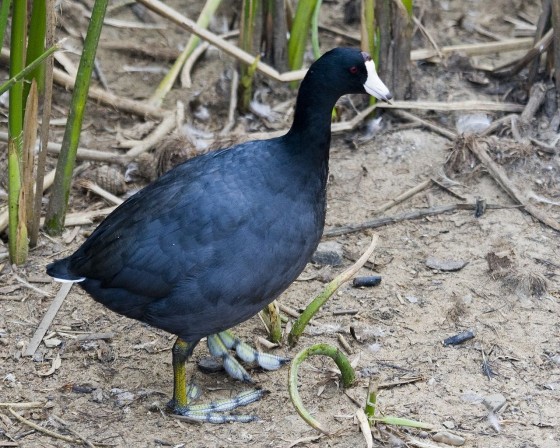 The American coot is a migratory bird that occupies most of North America. It lives in the Pacific and southwestern United States and Mexico year-round and occupies more northeastern regions during the summer breeding season. In the winter they can be found as far south as Panama. Coots generally build floating nests and lay 8–12 eggs per clutch. Females and males have similar appearances, but they can be distinguished during aggressive displays by the larger ruff (head plumage) on the male. American coots eat primarily algae and other aquatic plants but also animals (both vertebrates and invertebrates) when available.

The American coot is listed as “Least Concern” under the IUCN conservation ratings. Hunters generally avoid killing American coots because their meat is not as sought after as that of ducks.

Coot chicks have conspicuously orange-tipped ornamental plumes covering the front half of their body that are known as “chick ornaments” that eventually get bleached out after six days. This brightly colored, exaggerated trait makes coot chicks more susceptible to predation and does not aid in thermoregulation, but remains selected for by parental choice. These plumes are not necessary for chick viability, but increased chick ornamentation increases the likelihood that a chick will be chosen as a favorite by the parents. Experimental manipulation of chick ornamentation by clipping the bright plumes has shown that parents prefer ornamented chicks over non-ornamented ones. 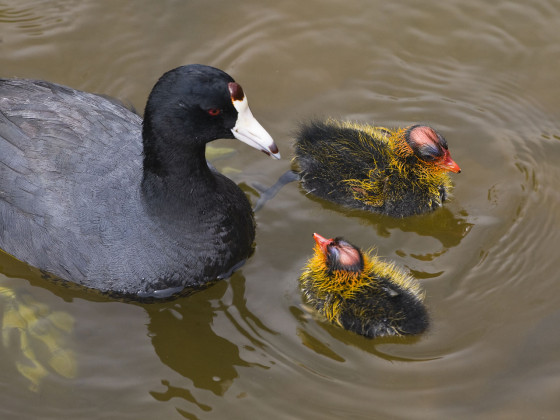 I have to confess, I’ve always thought that they were just ordinary ducks. I had no idea they weren’t ducks, that they had lobed scales instead of foot webbing, and the kids were so, well, unattractive. Sorry, Mama Coot.

Anywho, my favorite thing about coots is watching them feed. I took a video for you to see for yourself. All the head bobbing and diving is so cute:

Check back all this week to see the rest of the birds at Squaw Creek, among them sandhill cranes, white faced ibis, great egret, and much more.