It’s been a crazy week here on the farm. The cows started calving last Thursday night.  The first was a heifer with her first calf. Harland found them in the early morning. She’s had him sometime between 3am and 6am. While the heifer had done a good job getting her calf cleaned up, there was a cold wind blowing and the calf had gotten chilled. Harland put his finger in the calf’s mouth. It was cold. Hypothermia. Moving quickly, he took the calf and heifer into the barn, and placed the calf into a calf warmer, a doghouse sized box with a heater. The calf spent the next 8 hours there with her mom close by. Finally the calf warmed up and Harland let him out of the calf warmer so the cow could reunite with her baby. 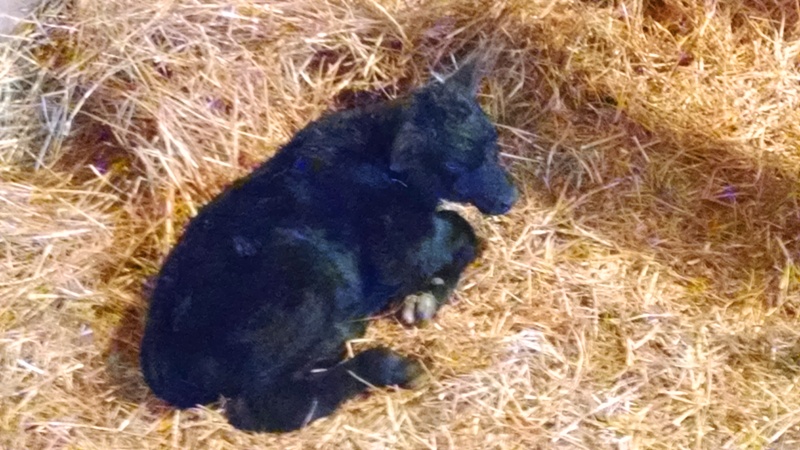 The next morning he let them out into the pasture and continued to keep a close eye on the calf over the next few days. He felt sure that the calf had suffered frostbite to his feet, but that fear subsided when we saw him hopping about and running laps around his mom over the weekend.

Every night, Harland gets up each night to check on everyone. He gives every newborn calf a tube feeding of colostrum containing antibodies, some medicine for scours, and iodine on the umbilical cord stump to prevent navel ill, a fatal infection.

After a 2am check on the cows Friday night, he came back to bed and told me one of the cows had had a calf, but it was dead. The next day he got a good look at it and found that it had birth defects including fused joints. He said the cow was lucky to be able to survive having a calf with this condition as it is very hard on the cow and often results in the death of the cow as well as the calf.

Every day I check the heifers when I come home from work. Yesterday, as I rolled into the drive, I noticed one of the heifers off by herself away from the rest of the herd, which is typical behavior when having a calf. I put my car in the garage and walked up to take a look. As I got closer, she got to her feet. Behind her was a calf. I took a closer look to make sure the calf was breathing. It was. She had cleaned him up, and fed him too. Good girl! Excellent for a first time mom!

I went to the house and called Harland to let him know. He was at the farm down the road from our place doing chores. He said he’d be there soon. I changed out of my work clothes and into my farm girl outfit. Then I made a bottle of colostrum milk for the calf. Muffin and Kitty helped….not. They would like to drink it themselves.  Harland got in just as I finished making the bottle. He grabbed a pill for scours, and we headed up to the barn. Once there, he got the calf into the barn, gave him the colostrum, the scours pill, and sprayed the unbilical cord stump with iodine. After that was done, he got the calf’s mom into the barn and then let them both into their very own pen with a deep bed of straw to spend the night.

As the heifer walked into the pen, she took the corner too fast, and her back feet slid out from under her. It was a bad spill, but she’s ok. Angus cows are armor plated and tough.

I love to watch cows with their first calf. All the low mooing sounds she’s making are to reassure the calf, a one sided conversation. “I’m here honey. You stay close to me. I’ll take care of you.”  It’s a kind of language they only speak to their new babies and only for a short period of time. When a cow gets to her feet after pushing out a calf, she’ll turn around, sniff the calf all over, start licking it clean, and make the new mama low mooing sound. They never make these sounds until they have a calf, and it only lasts for the first few weeks of the calf’s life.

Keeping the cow and calf in the barn overnight is something we do with all our heifer calves. It gives them some alone time away from the herd so they can bond. Other cows sometimes try to steal newborn calves for themselves. Being in the barn is also warmer for the calf, and makes it easy for us to watch over them and make sure they are ok before turning them out into the pasture the next morning. We make sure they’ve bonded well, that the calf is healthy, and is nursing from the cow.

This morning first thing, Harland checked the heifers, and then came back to the house to make a bottle of colostrum. Another heifer had had a calf in the night. “They’re dropping like ripe fruit now.” He remarked. He told me she had cleaned up the calf, it had nursed, and was up and hopping about. As I headed off to work,  Harland walked up to the barn, a bottle tucked under his arm.

The weather this week is ideal for calving…

which is good as the calves now are indeed “dropping like ripe fruit”, a few more every day. Soon there we’ll have lots of babies hopping about and playing with each other.