Saturday, as part of our visit to Old Jefferson Town (see my post of yesterday), we visited the Nincehelser house. It is a lovely Victorian 2 storey home, built and lived in by only one family, the Nincehelsers: William and Minnie, and their four daughters.

In 1880, William Nincehelser, age 25, moved from Ohio to Oskaloosa, KS. He started a livery, and coal dealing business, and he met a local lady ,Minnie Wendorff, age 25. In 1885, William built a two storey house in the 500 block of Cherokee street, Oskaloosa, he and Minnie married, and settled down to raise a family. 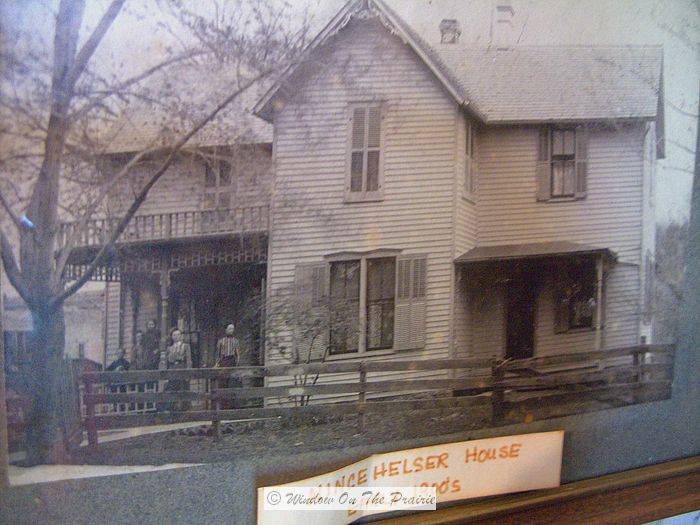 Two years later, in 1887, they had their first child, a daughter, and named her May. In 1889, another daughter was born, named Maud. Nell was born the following year, in 1890. Financially, the family must have been doing well. I found a newspaper clipping from the March 30, 1894 Oskaloosa Times that states:

“William Nincehelser has treated himself to a brand new hack(carriage) from the Elkhart, Ind., Carriage Works. It is one of those long-bodied fellows, almost as long as Will, capable of seating anywhere from ten to fifteen, according to the size and disposition of its occupants. Will is making some substantial improvements in his business and when he gets his new barn completed will have one of the most complete stables in the state.”

In 1897, their last child, Agnes was born. All four girls were Christened in the same dress. Minnie also made a blue and white quilt for each of her daughters. All four daughters attended Oskaloosa public schools, went on to Emporia State University, and became teachers in Jefferson county. 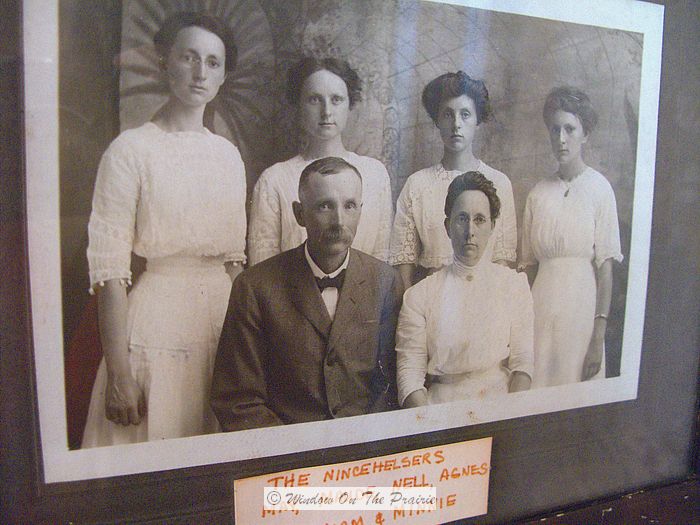 William & Minnie with their daughters, from L to R: May, Maud, Nell, and Agnes

In 1913, at the age of 24, Maud met and married Frederick Thomson, a school superintendant. Two years later, in 1915, they moved to Horton, where Fred took a job as superintendant of Horton Schools. Sadly, they did not have any children.  May, Nell, and Agnes never married, but taught at local schools, and were active in their community. May served as county superintendant of schools for a time. They continued to live with their parents in the house William had built in 1885.

In 1969, at the age of 82, the eldest daughter, May died. Only the 2 daughters, Nell and Agnes remained living in the house. Then in 1978, the youngest daughter, Agnes, died at the age of 81. Now, Nell lived all alone in the 2 story house. She continued to live there until her death in 1980 at the age of 90.  In her will, she left the house and furnishings to the local historical society,  for the house to be moved to Old Jefferson Town. Unfortunately, she did not know that the cost to move and refurbish the house would be more than the society could afford, approximately $25,000.  Fortunately, the last remaining sister, Maud Nincehelser Thompson, the only daughter who had married, donated the majority of the amount needed, and the house was moved in May of 1980. It was decided that the house should be restored to how it would have appeared in the years between 1900 and the First World War. More modern pieces were replaced with donated or purchased pieces. But the majority of the furniture was kept along with lamps, vases, pictures, and other miscellaneous memorabilia. The ceiling fixtures, door knobs, and radiators are also all original.

Maud was now living in a nursing home, but expressed her wish to see the home when the restoration was complete in 1981, and the house opened to the public. 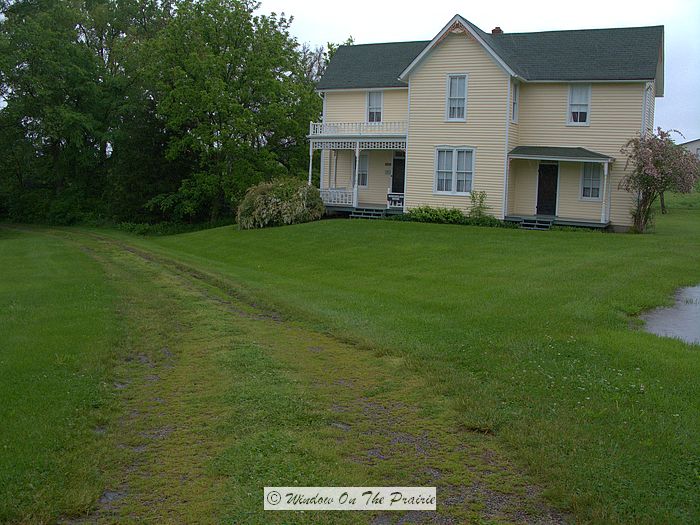 I was not able to determine if Maud was ever able to visit the house. If not, she must have seen pictures and heard how visitors were enjoying her family’s home. 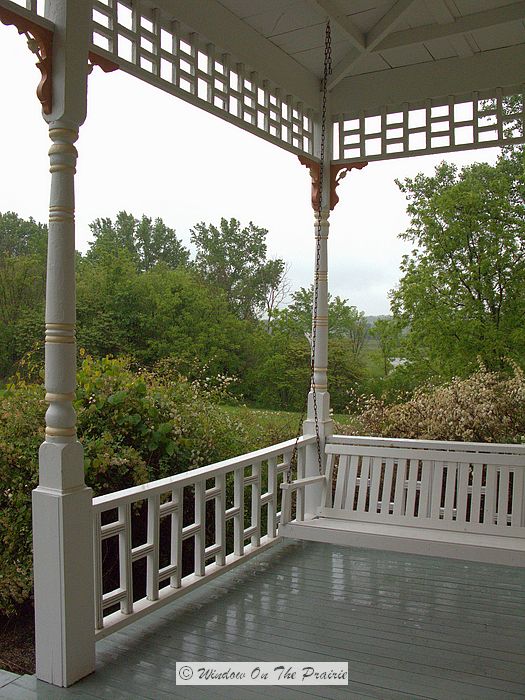 The first room entered from the front door is the sitting room: 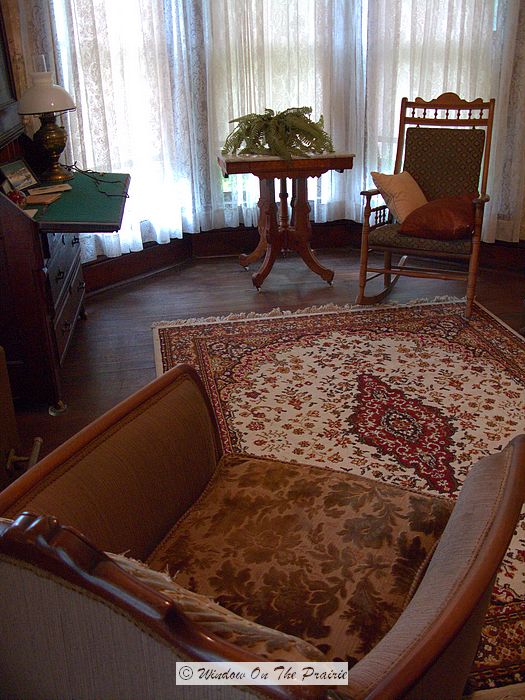 Through the sitting room is the kitchen, 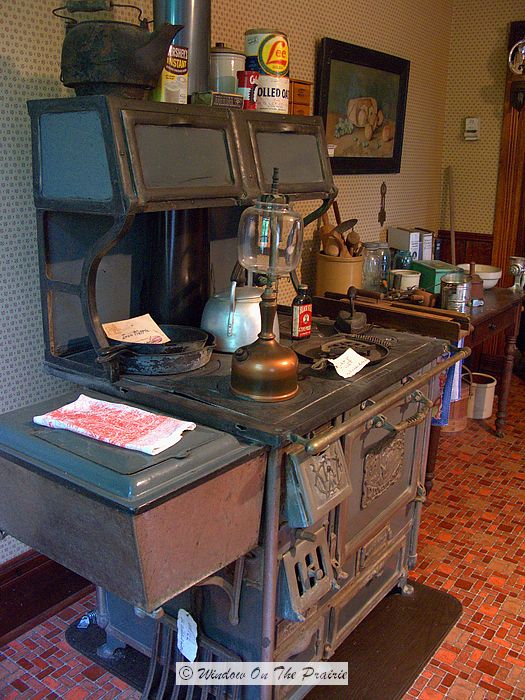 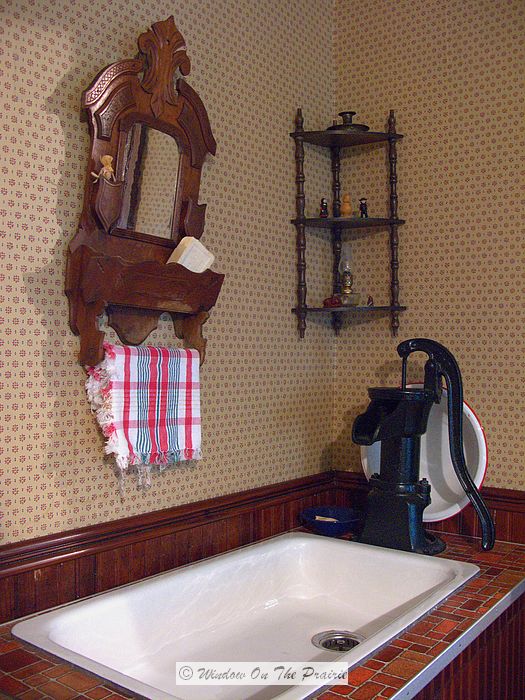 Through the kichen is the dining room, 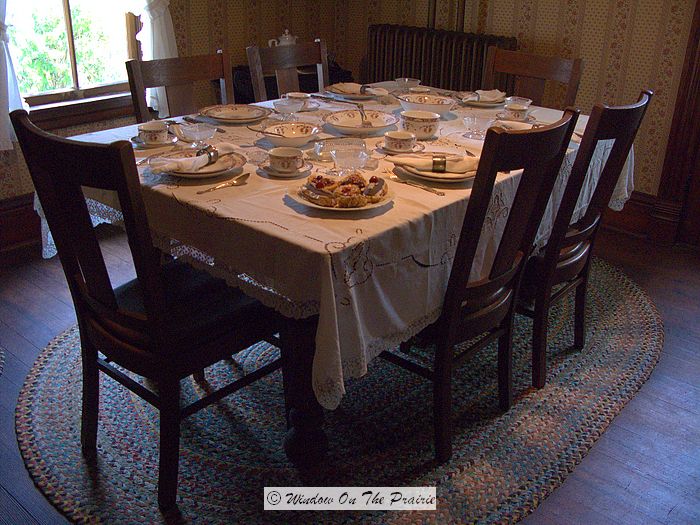 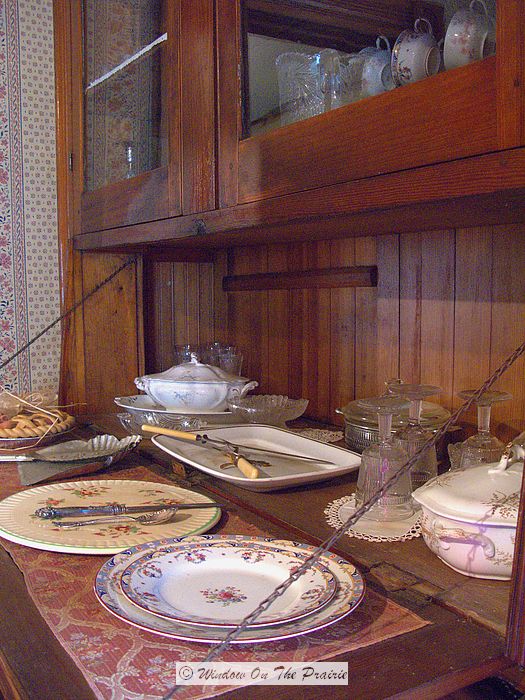 From the dining room, there was a sewing room, with a quilt streched on a frame. 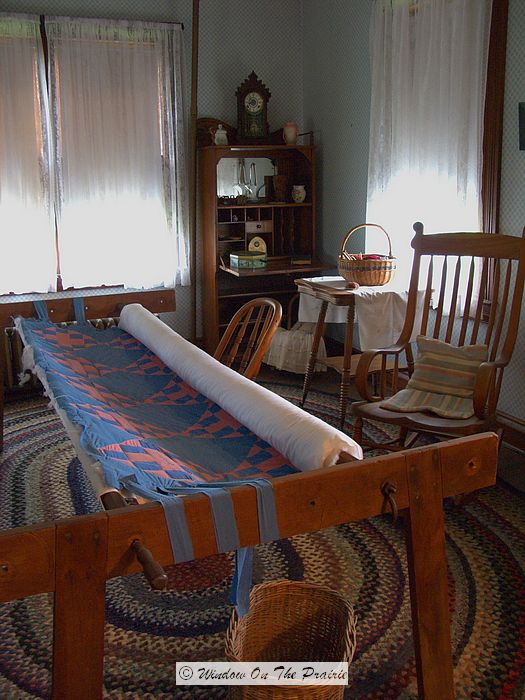 There was also a music room on the 1st floor, which I neglected to get a picture of.

There was a narrow staircase to the 2nd floor. There were 4 bedrooms upstairs, 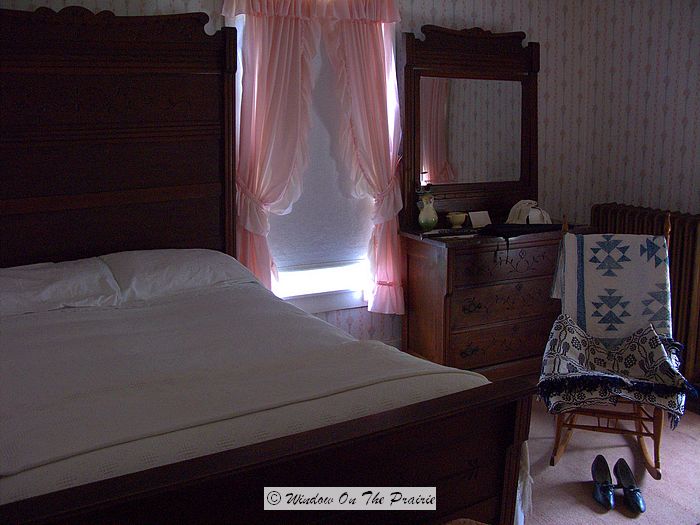 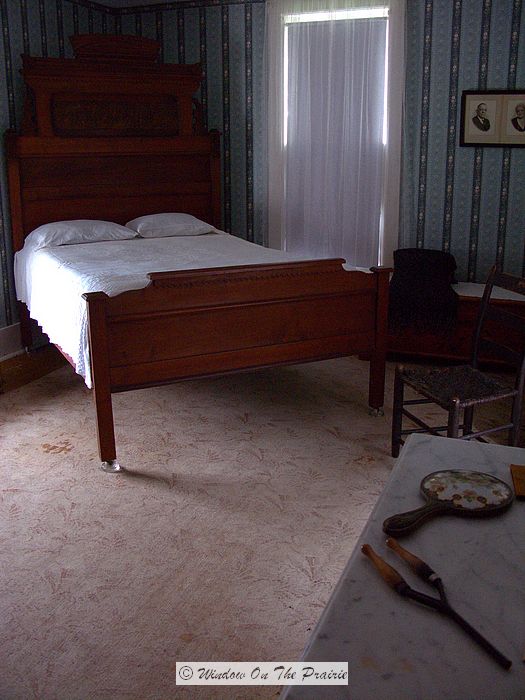 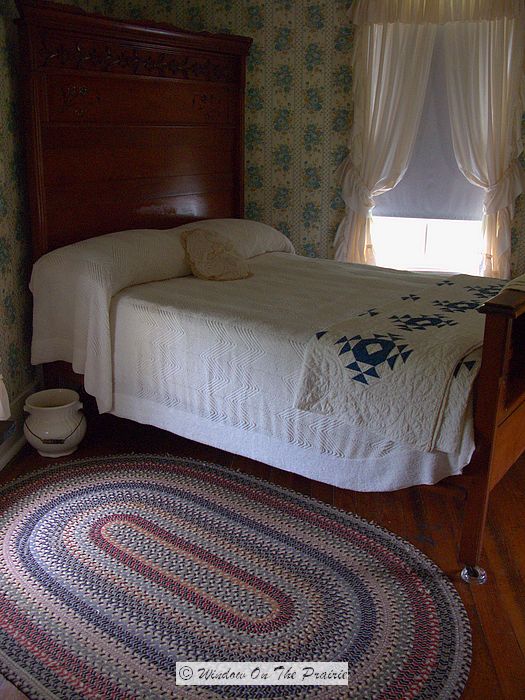 In each of the bedrooms, a blue and white quilt was displayed. These are the same quilts that Minnie made for each of her 4 daughters. 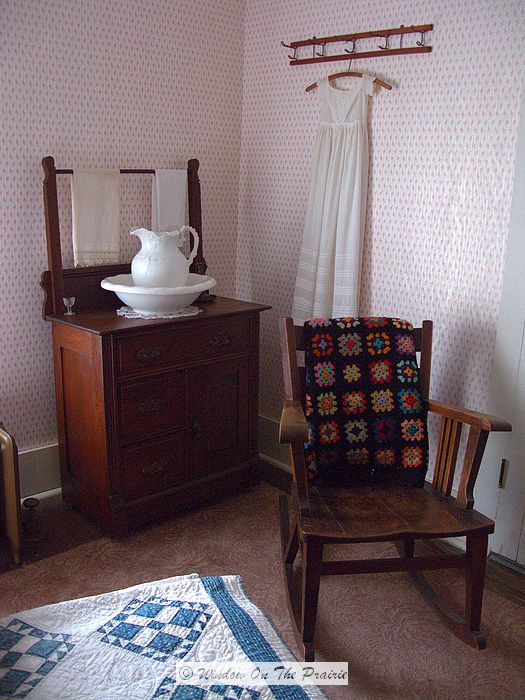 And in one of the bedrooms, the Christening dress worn by her 4 daughters was laid across the bed. 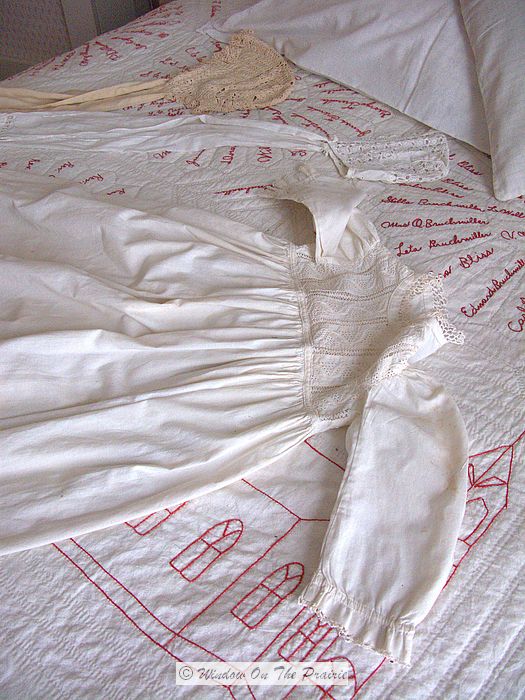 In 1984, the last member of the family, Maud, died. She was 95 years old. While none of the 4 Nincehelser daughters had any children, they were able to pass along a glimpse of life in the early part of the 20th century. It is a resource that will be enjoyed for generations to come.