Cattle Round Up – Part 3

Sunday afternoon, we were left standing there watching as the semi-trucks holding our cattle headed down the road towards home.  (You can catch up by looking at Part 1 and Part 2)  We followed along in our pickup, made a stop for gas, and when we got home, the first truck holding the cows had already been unloaded. They were standing in a group waiting for the calves to be unloaded. The cows were not patient about it either.  Moooooo.  MOOOOOOOOOOOO!!!!!!!    Translation: We want our kids dammit! The truck pulled up to the unloading chute, the door opened, and ….nothing happened.  Cue crickets. The calves, having never been on a semi before didn’t know that they were allowed out when the door opens. They were just standing there. So the driver climbed up on the side of the truck and yelled at them to get out. 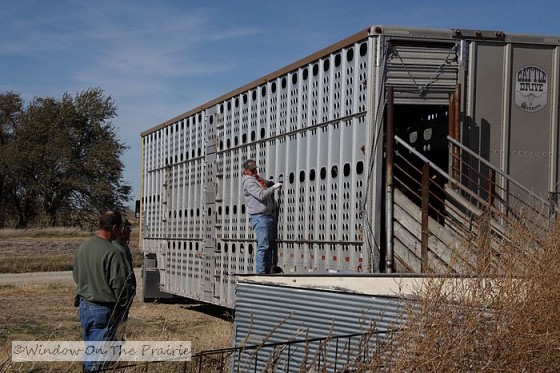 They began to come hesitantly down the chute. 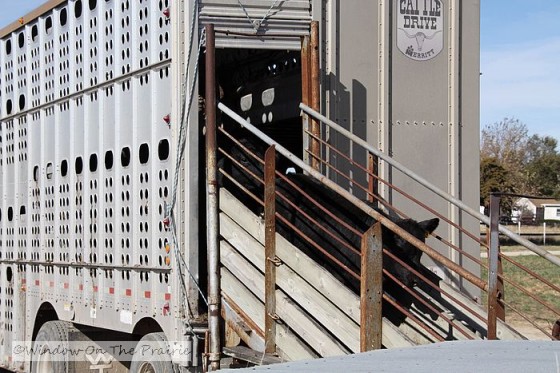 But once they saw their mamas out there waiting, they picked up the pace and everyone spent the next hour getting reunited, and sharing stories of their horrible day with the humans.  Cows and calves paired off and headed as a group away from the truck. 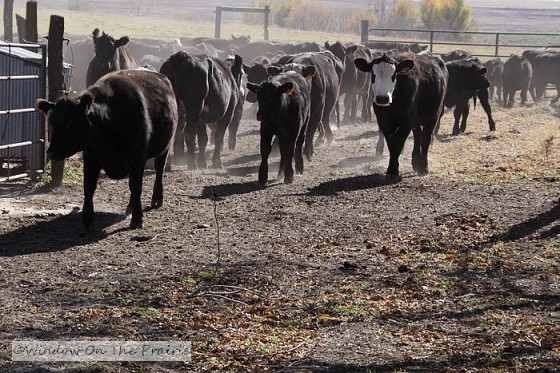 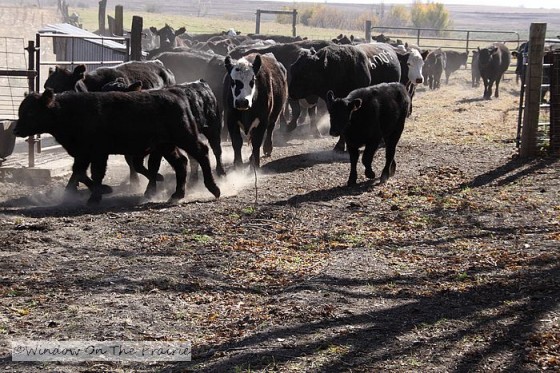 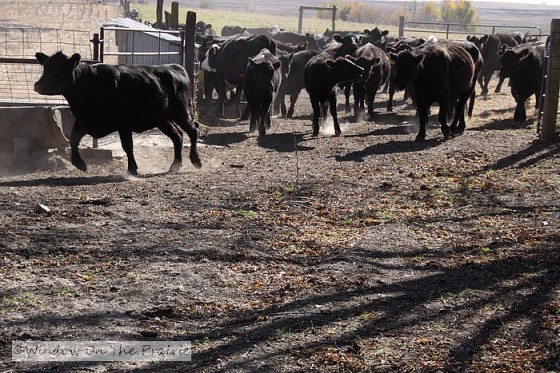 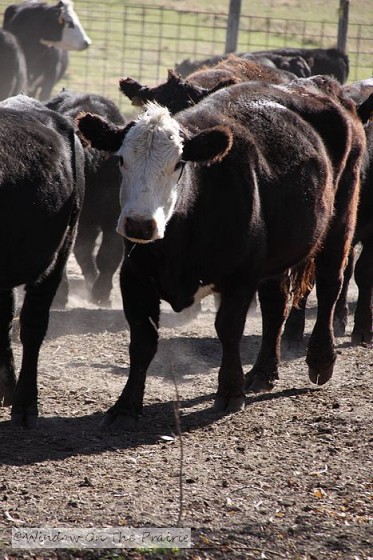 And here’s a neat part of round up: the bull’s reaction. We have 3 bulls. Two of them were at the summer pasture and came home on the truck, while the 3rd bull spent the summer at home with 10 young cows. When the bulls all get together in the lot, they first let each other know they are there. They don’t moo like cows, but instead make a wheezy and grunting sound. To another bull, this means, “I’m here, don’t mess with me”. 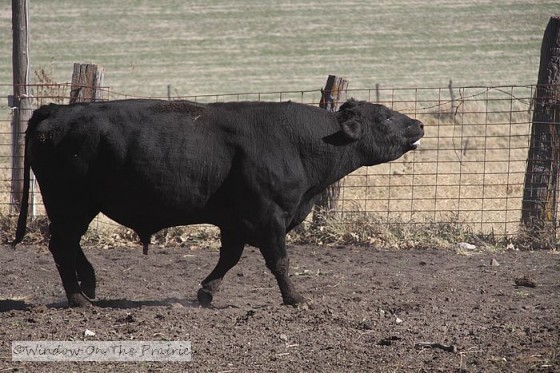 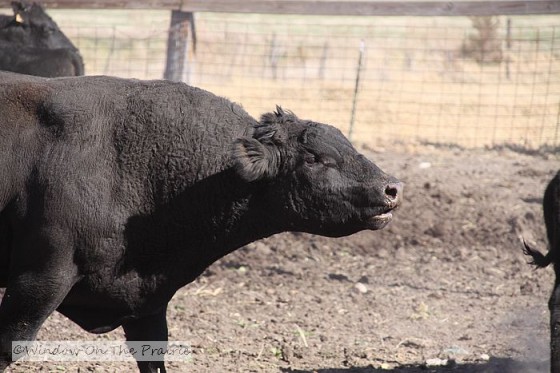 When they catch sight of each other, they throw some dirt around trying to look tough. 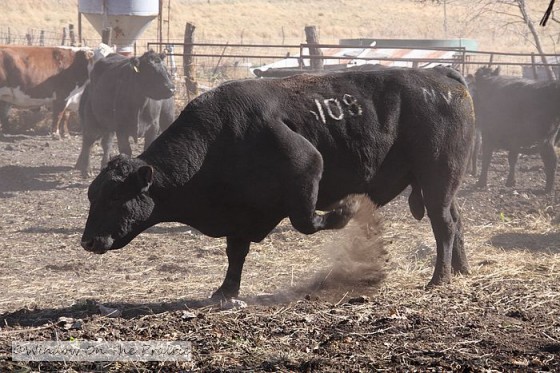 Finally, they face off for a world class shoving match. 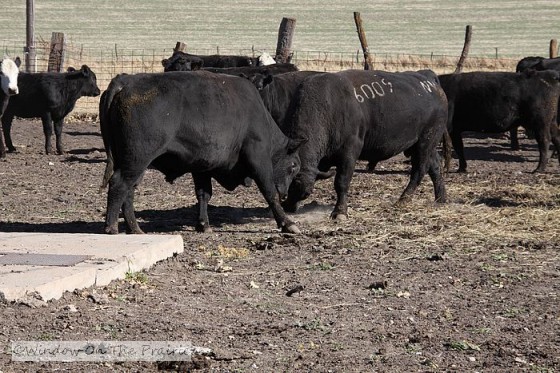 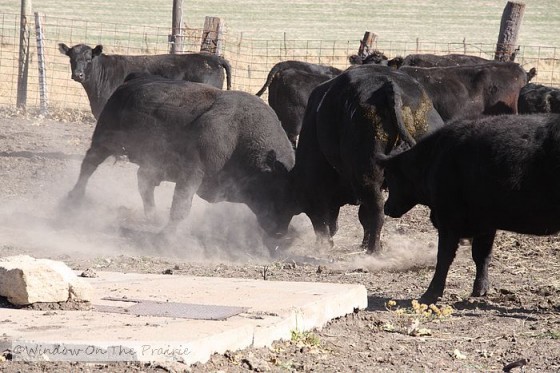 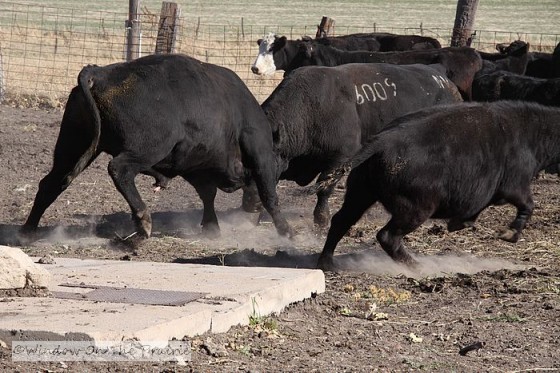 It’s hard to tell who the winner is because they just stop, and then walk away from each other. 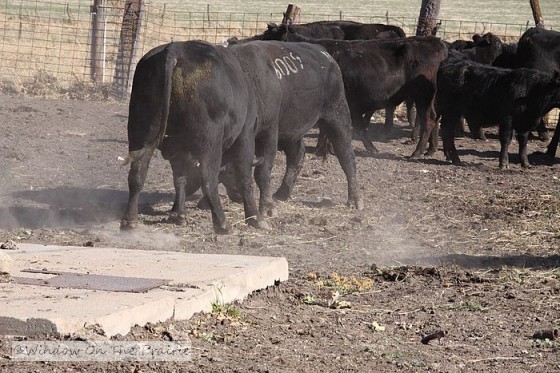 And here’s a little known cow behavior fact: there’s a hierarchy among the cows(girls) too. They engage in shoving matches to establish who’s in charge. 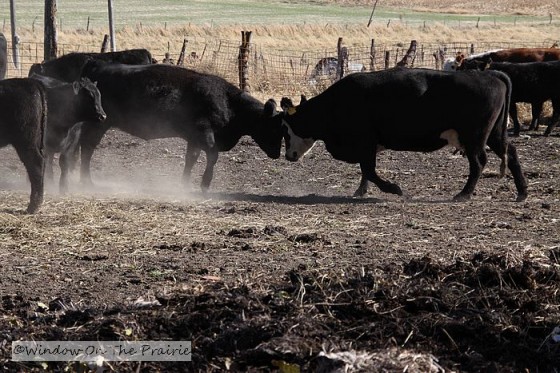 Amidst all the shoving matches, the cows and calves that haven’t gotten back together after the trip call to each other, 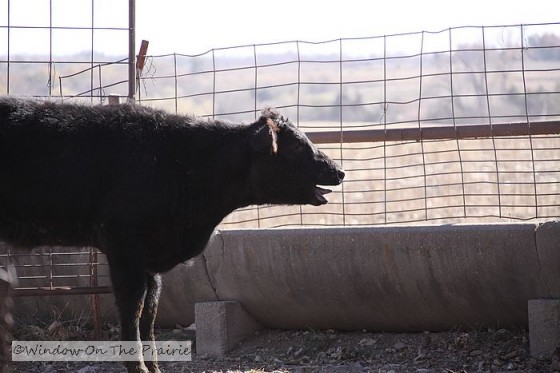 reunite, and everyone spends the rest of the day just settling down and relaxing. 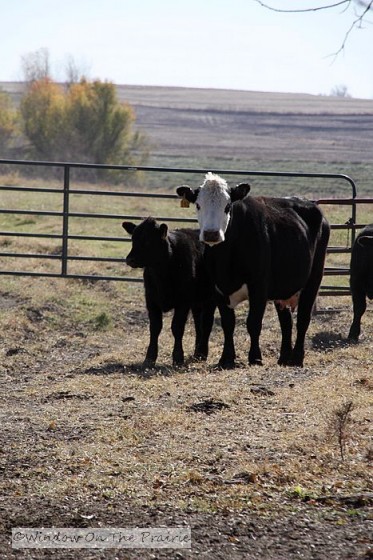 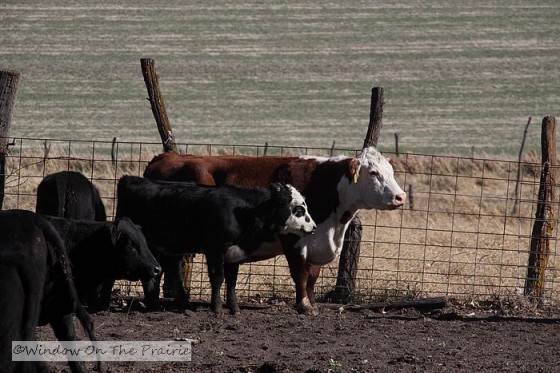 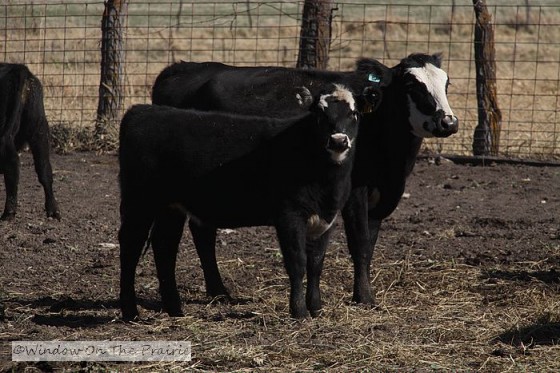 This weekend, the cows, who are already pregnant with next year’s calves, will be turned out into the harvested corn field to spend a month or so eating corn stalks and leaves which they love. The calves will be left behind in the lot. This is how we wean our calves.

In January, Harland will pick out 10 of the best looking female calves to replace any cows we cull from the herd this year. They will be bred next summer, and will have their first calves in March 2012.

The rest of this year’s calves will be sold at auction in January. They will go back out on grass next summer, then spend 90 days in a feedlot eating grain next fall, and then, ….well….um..you know….Angus beef.

——->UP NEXT: Extra pics taken of the cows over the weekend. Strange expressions, habits, oddities, and calf cuteness.

Tags: bulls fightingcattle round upCattle Round Up - Part 3fall round up