Turkeys In The Snow 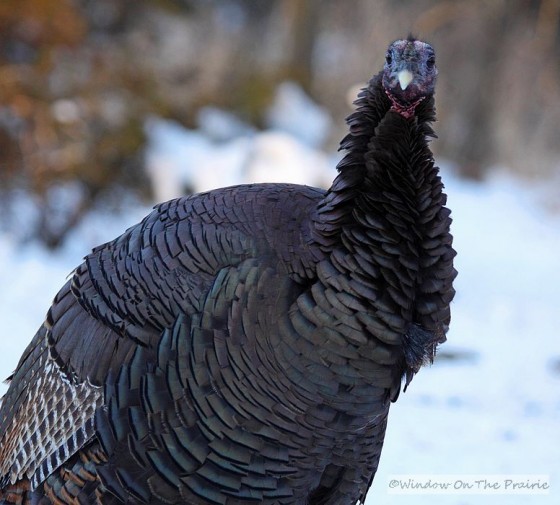 Harland, my farmer/photographer/volunteer fireman/husband has more free time in the winter than any other time of the year. So a few weeks ago, he decided he would like to photograph turkeys up close and personal. Not too far from where we live is a wooded area near a lake. First he set up one of those motion sensitive cameras that you attach to a tree and it takes pics when triggered by movement. The camera showed there were a lot of turkeys, deer, and the occasional coyote. He was hoping for Bigfoot, but so far he hasn’t showed himself, or herself. Next, Harland went over there every couple days to throw some corn around to get the turkeys in the habit of visiting a particular clearing in the woods. That got old, so then he ordered an automatic feeder that shoots out corn twice daily. Then he set up a blind that he could sit in to take pictures in anonymity. He’s in the witness protection program and doesn’t want the turkeys to recognize him. Whoops, forget I said that.

Then one morning, he got up earlier than usual, dressed in the required 15 pounds of winter clothing, grabbed his camera gear, portable gas heater, and something to eat and drink, and took off. Later that day, I got an email from him at work showing beautiful close-up pictures of turkeys. Ack! I wanted to take pics of them too! So Harland bought a chair blind for me and set it up in the woods so the turkeys could get used to it.

And finally, last Saturday morning, we got up at 6am, ate a quick bite, loaded up our camera equipment, and were out the door before 7am. We drove over to the wooded area, hauled in our equipment, got all set up, crawled into our blinds which are situated side by side, and waited. We could hear clucking off to the south of us, and soon a large flock came in to feed on the corn. 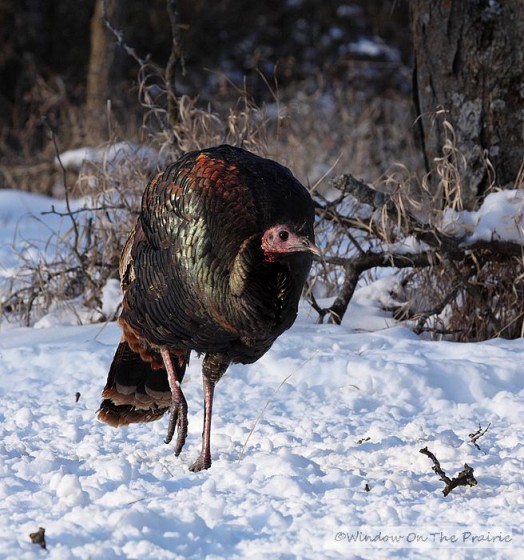 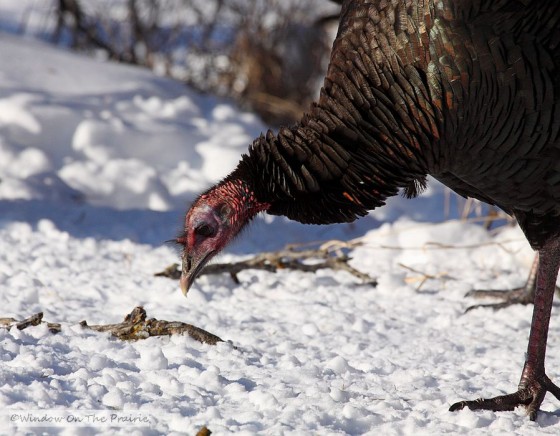 They hung out for about an hour, rested, 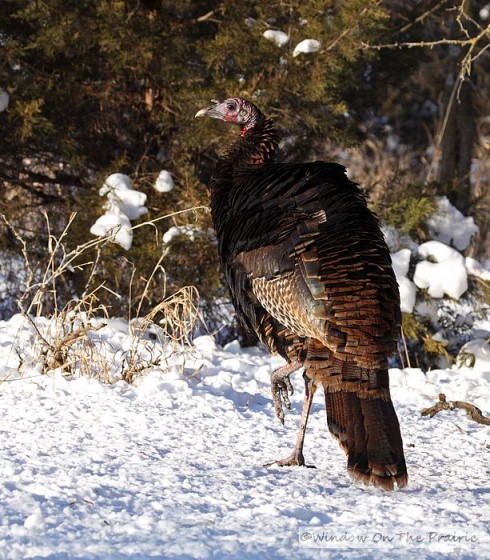 and fluffed out their feathers to stay warm. 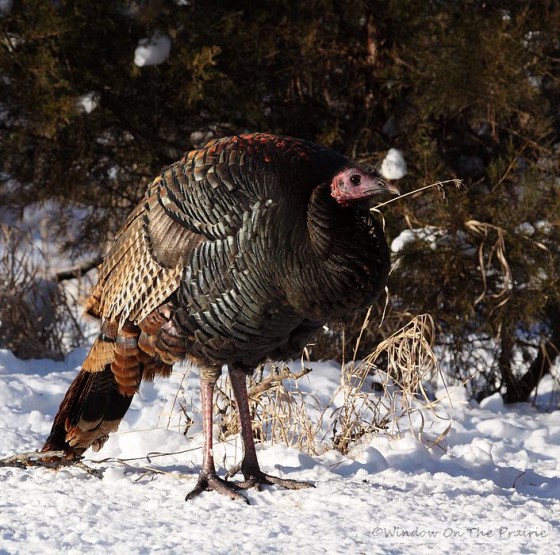 This one stretched out her wing and leg. 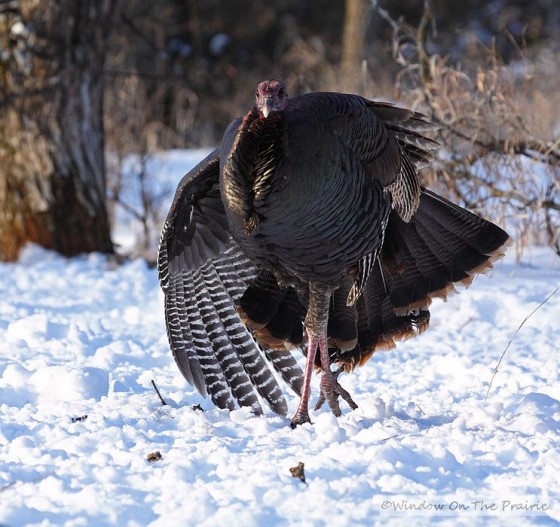 They noticed our blinds, could hear our camera shutters going off, and would stare occasionally. 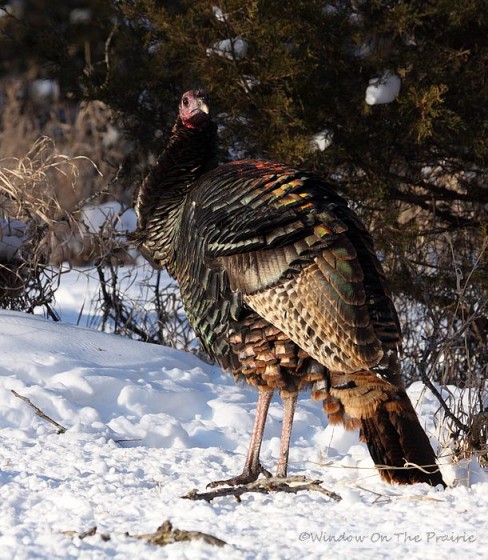 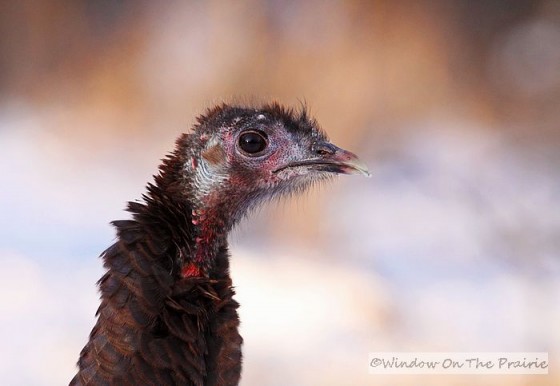 But they weren’t alarmed. Unless animals can make out your outline, they aren’t aware of what you are. So no worries. 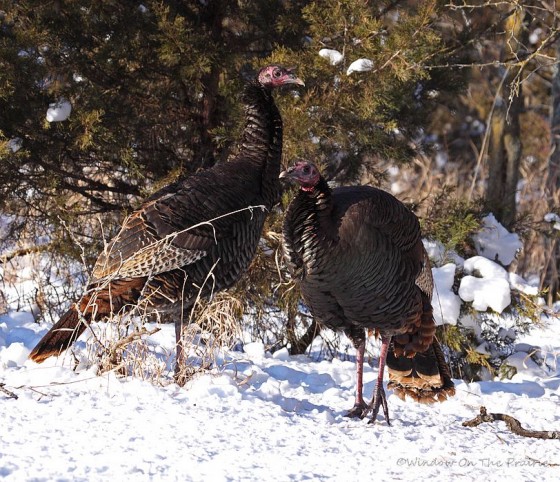 “Hey Betty, I’m pretty sure those 2 humans weren’t in those blinds yesterday.”

“I know Louise, the male human has been here several times, but I haven’t seen the female human before.”

“Why are they cramped up in those blinds Betty?”

” I dunno. Humans do some pretty strange things.”

The flock moved on, and soon, another flock showed up. I have to say that turkeys have a face that is best admired from a distance. 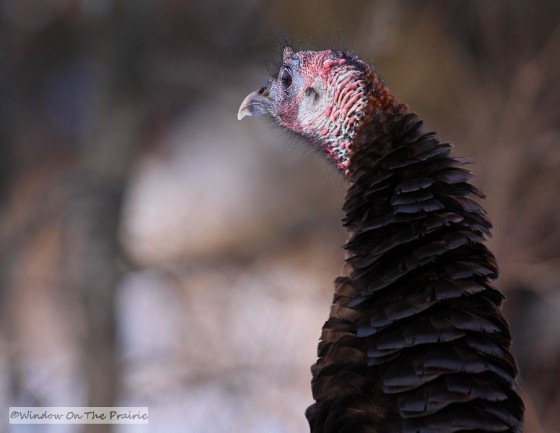 It was below freezing that morning, and when not walking around, they would raise one foot up to their chest feathers to warm it. 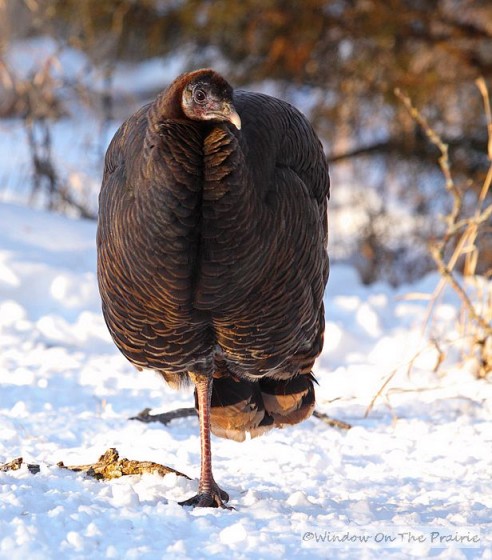 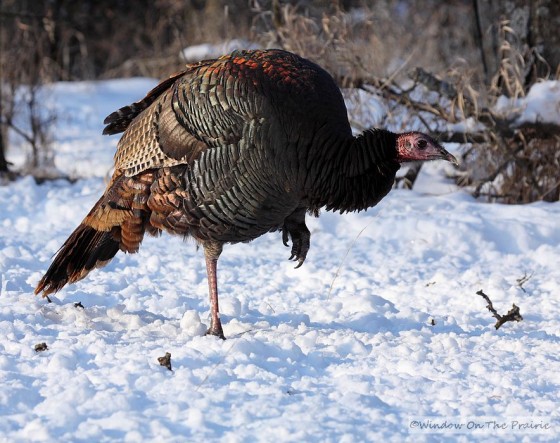 I had never been this close to turkeys before. They are pretty fascinating to watch.

We stayed until about 10am, and if it had been a little warmer, we probably would have stayed longer. We plan on going back as the weather warms into spring to get pictures of the males doing their spring courting display. If I can get some pics of that, I’ll certainly share with you then.

———>  UP NEXT: One smart turkey decides to outwit the automatic corn feeder. 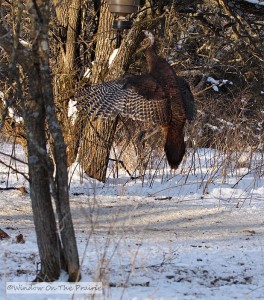