Oy! I forgot to show you pics from our spring cattle move over a week ago. Before I get to the pics from our roadtrip this past weekend, I’d better show you the cattle drive pics otherwise we’ll be all out of order.

So if you’re new here, we have a herd of cattle, a cow-calf operation. Every spring after the cows have had their calves, we round up the herd, give everybody vaccinations, load them onto a truck for a journey of about an hour and a half, and then release them into the summer pasture where they live until late October.

The spring move starts early in the morning. Harland’s brother Gerald, and his nephew Andrew help Harland when we work cattle. I’m on hand to help out where I can. We used several 4 wheelers to get the herd up out of the little winter pasture and drive them up into the lot. Then we separated the cows from the calves and put them in separate pens. This is done to prevent the calves from being accidently hurt by the cows while they are getting their shots. 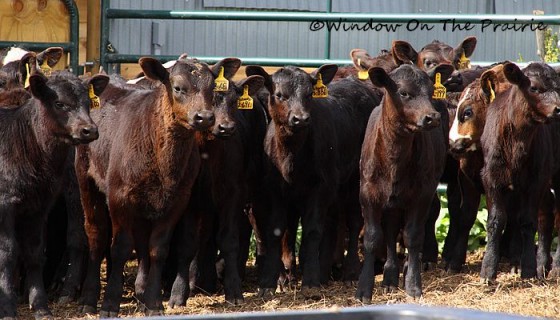 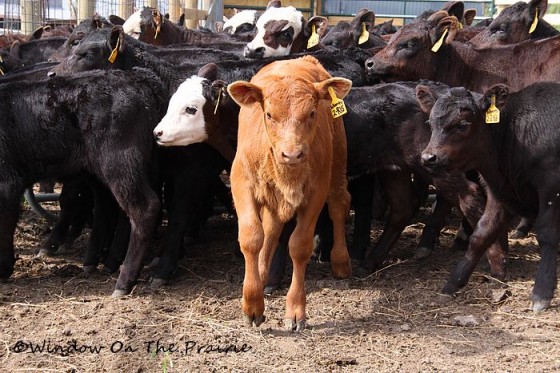 And when we give the calves their shots we don’t have to worry about the cows trampling us in anger. So it’s safer for everyone to separate the cows and calves. 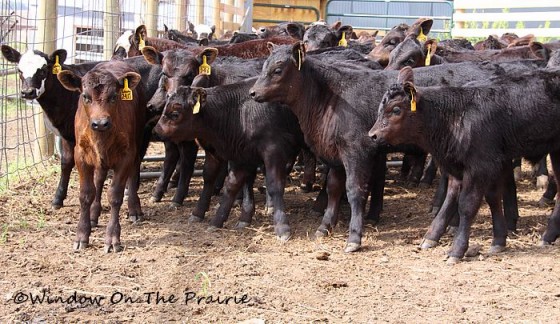 As we were sorting the cows from the calves, one of the calves slipped out of the lot under the gate back into the pasture, so Harland had to round it back up again and put it back in with the rest of the calves. Then we drove the cows through the chute in small groups and gave them their shots. 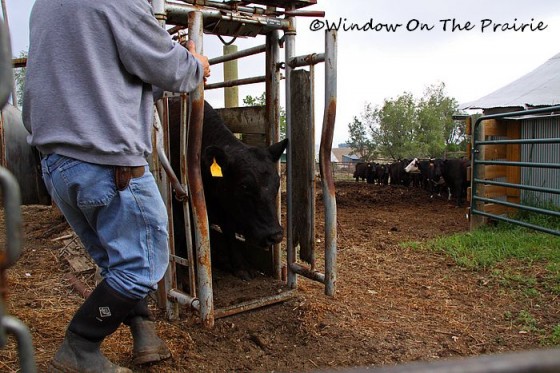 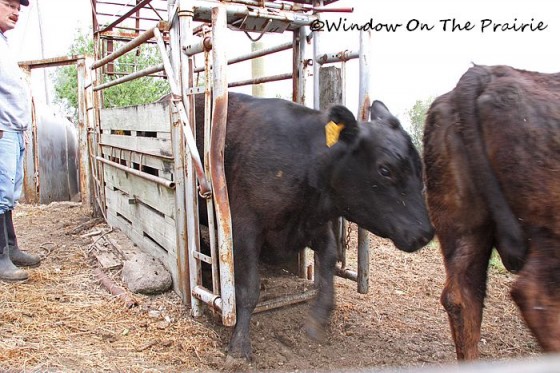 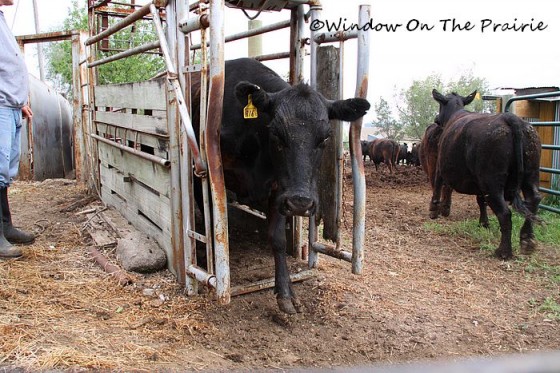 Then it was time to give the calves their shots. Unfortunately, the gate popped open and they came galloping out of their pen. 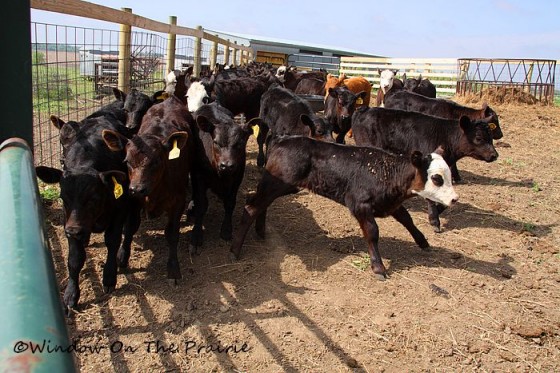 One of them jumped over a fence and got in with a group of last year’s heifers. So we got the heifers up out of their lot, sorted out the bad calf and put him back with the rest of the calves. Then we gave the calves their shots except for one – the same bad calf jumped another fence, this time to freedom – into the yard near the road. Now there was nothing to stop him from hightailing it over the hills and far away. But, lucky for us,  he wanted to stay near the rest of the herd and so he stayed just outside of the fence. We unfastened a fence panel, wrapped it around him, put a halter on his head and led, pulled, pushed, and cussed him back in with the rest of the calves. Then we gave him his shots.

All that was left then was to wait for the truck. There was time for us to have lunch and so I went into town for sub-sandwiches. When I got back, we ate and then the truck arrived.

We drove the cows back through the chute again and up into the truck in small groups where they were put in different compartments upstairs and down in the sem-trailer ensuring the load was evenly distributed. (The weight of the cows was about 25 tons total!) The truck then left for the summer pasture. We loaded the calves onto our smaller stock trailer, closed the door behind them, and we were off to the pasture too.

It makes me nervous to have our herd on the highway, so I was glad when we arrived to see the truck driver had gotten to the pasture safely and had already unloaded the cows into the pen. We pulled in, unloaded the calves into an adjoining pen, and then opened the gate in between the pens to let the cows and calves reunite. A frantic bawling on both sides began and continued until every mama and baby found each other in the crowd. 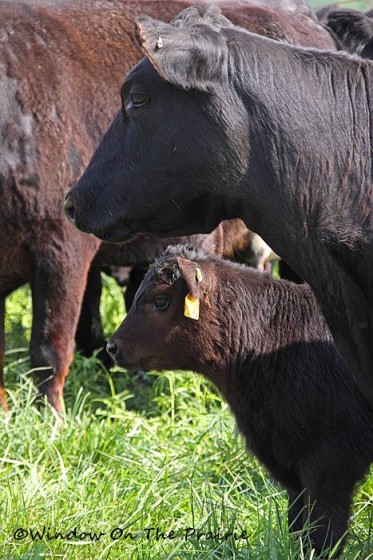 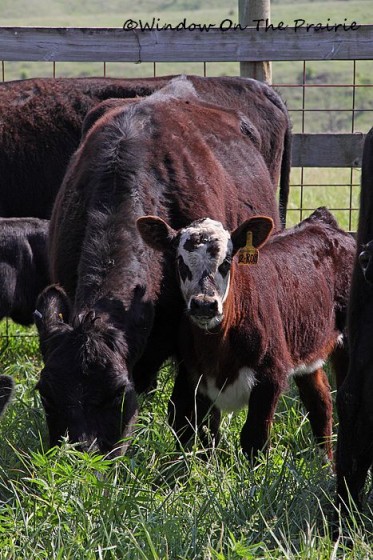 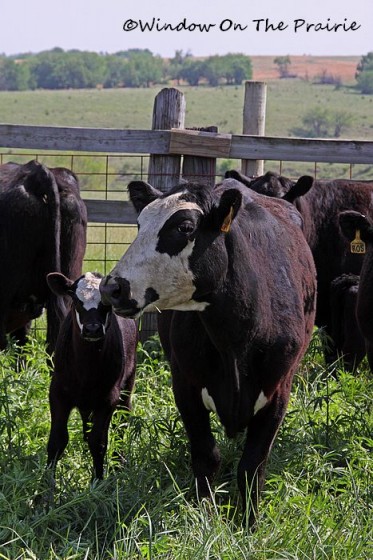 We left them alone to nurse and rest while we went in search of supper. We got a chicken dinner from a grocery store deli, drove to a quiet spot in the country and ate. Then we headed back to our cattle who by now had calmed down and were ready to be released into the pasture. We opened the gate.

Que the dramatic release of the herd music.

They ran out into the knee-high lush grass, gobbling down mouthfuls on the way. We walked behind them keeping them moving until they reached a quiet secluded valley. 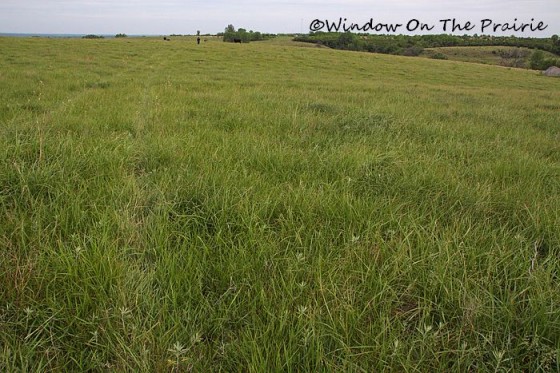 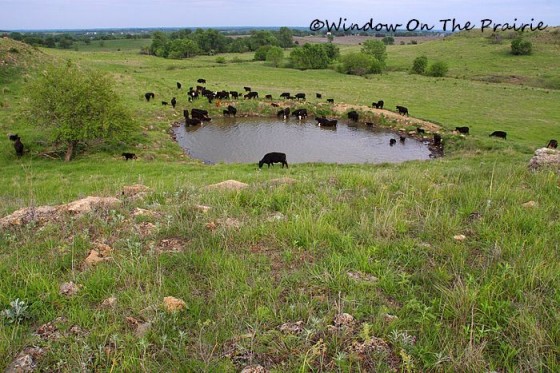 A drink of water at the end of a long day 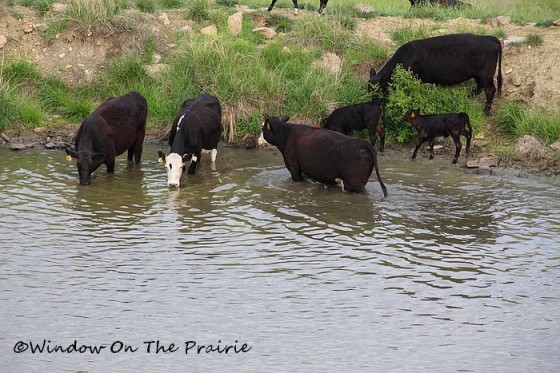 a drink and a cool dip

We watched them for a while to make sure everyone was ok. 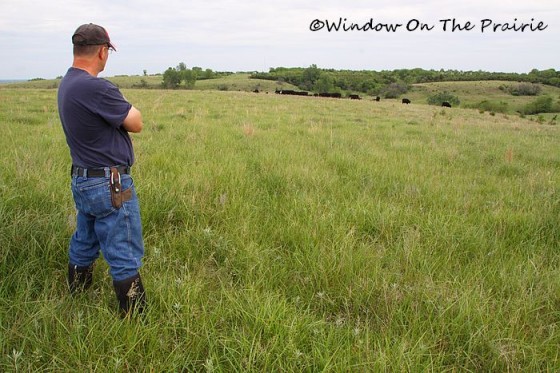 It’s a strange thing to walk away from the herd after the long winter where they are dependent on us for everying from food and water, to helping them if they have trouble calving.

In the summer pasture they are dependent on us for – well, nothing. They have plenty of green grass and spring water. They have a pond where they can take a dip on a hot day. There are plenty of trees for shade. 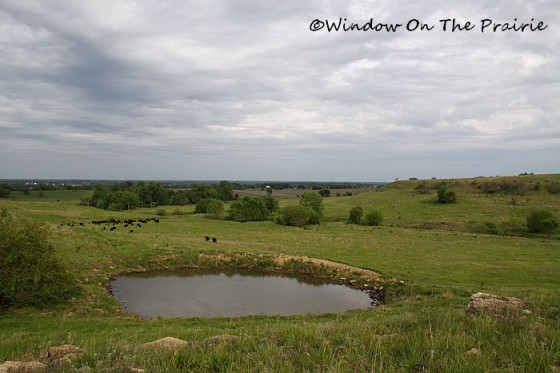 It’s the best time of the year for our cattle.