A New Roll Of Netwrap

Most of you are probably saying, “huh?” at the title of today’s blog post.

Netwrap is the netting that is wrapped around the outside of the bale to keep the bale from falling apart after it is ejected from the baler. 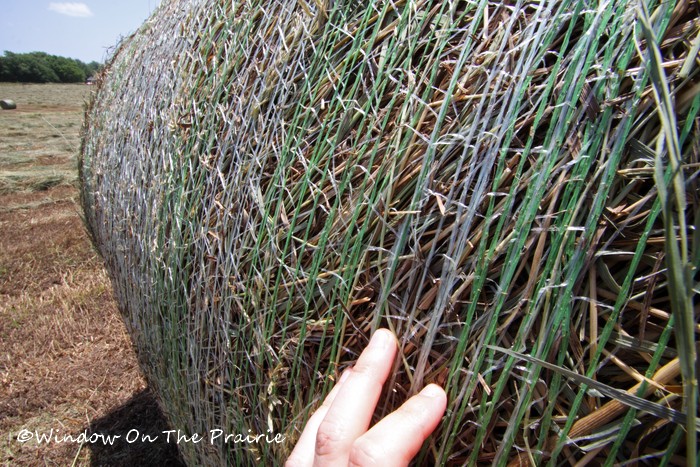 Anywho, last weekend when I was taking pics of Harland baling hay, he asked me to bring out a new roll of netwrap to him in the field. The one in the baler was running low. The new roll of netwrap was on the back end of the bucket truck so I needed to drive the truck out into the field close to where Harland was baling. 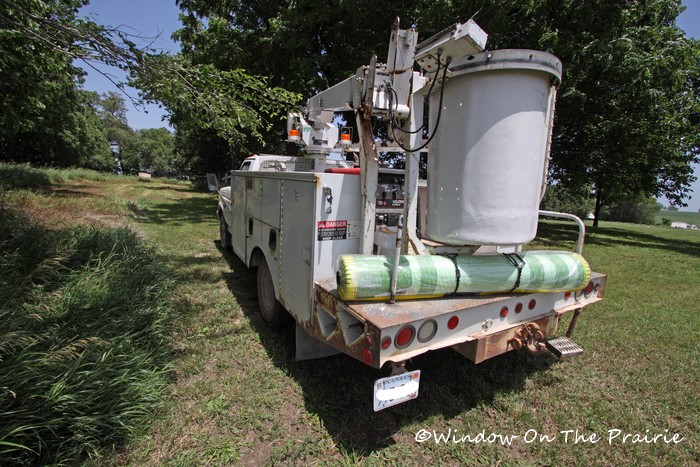 For the first time.

Oh, goody, this was going to be fun! It’s a big truck, a diesel. Never driven such a big truck. 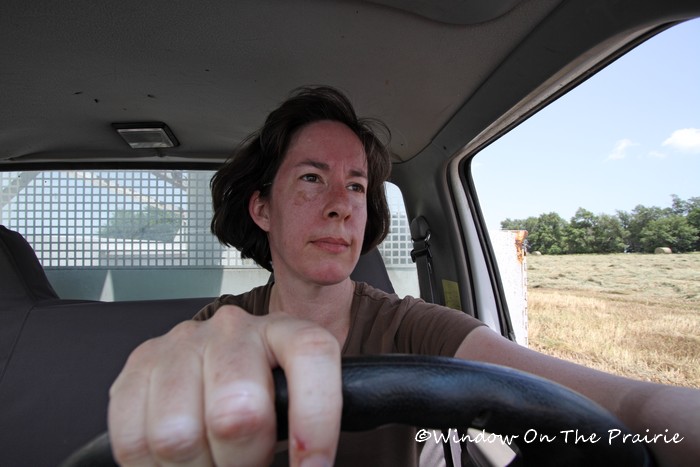 If my face looks red it’s only because it was about 95 degrees that day and I had been chasing Harland around the field on foot taking pics of him baling hay and the wind was blowing about 50 mph and it was all-around what I call a butt miserable day.

Oh, and see that red area on the end of my index finger?  A little advice for you:  If you happen to be in a hotel room and you want to reach into your cosmetic bag for your makeup and you force your hand past the disposable razor and it doesn’t have a cover on it, it’s likely to peel a piece of flesh off your finger like a potato peel and your finger is likely to bleed like a stuck pig. And you won’t be able to stop the bleeding and you don’t have a bandaid so you’ll hang over the bathroom sink while it drips blood as you frantically try to make a bandaid out of toilet paper.

Back to the netwrap.

So I drove the truck out into the field and down the hill. I turned off the engine, rolled down the windows, and waited for Harland to run out of netwrap. Getting out of the volcanic sun was a blessing, and the wind swirling around in the truck was refreshing.

Finally he ran out of wrap and drove over to the truck. He popped open the back of the baler and removed the cardboard roll leftover from the wrap. 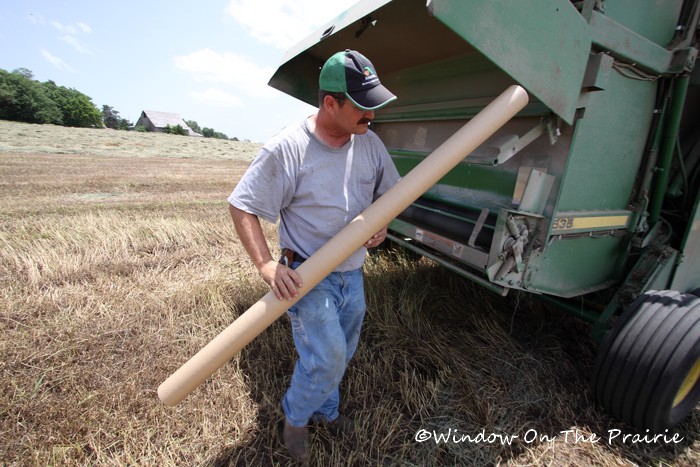 Then he removed the new roll from the bucket truck. 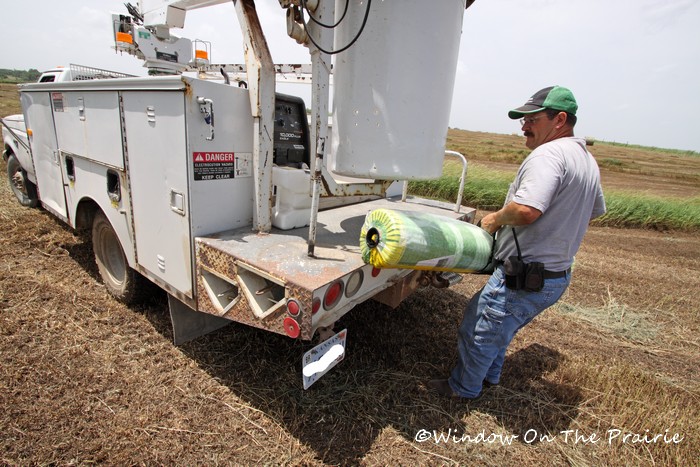 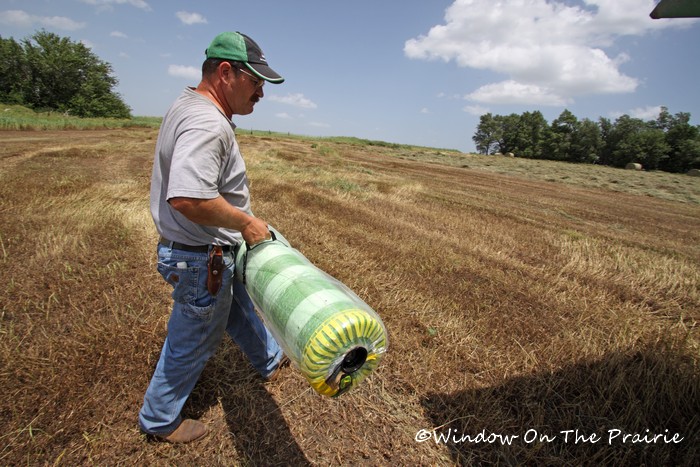 Next he removed the outer wrapping: 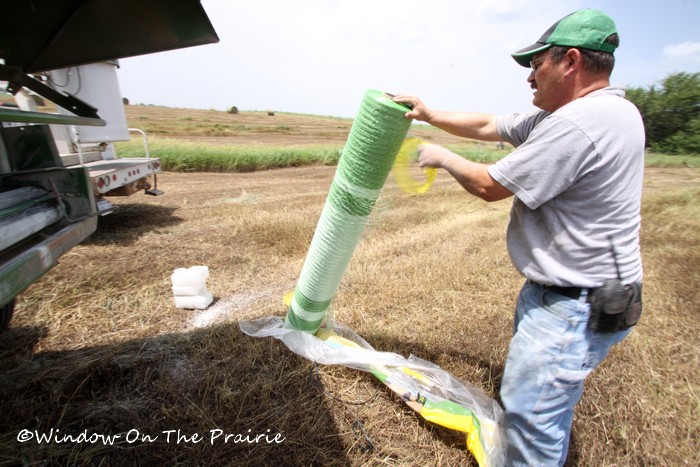 applied baby power liberally to the rollers to help them run smoothly, 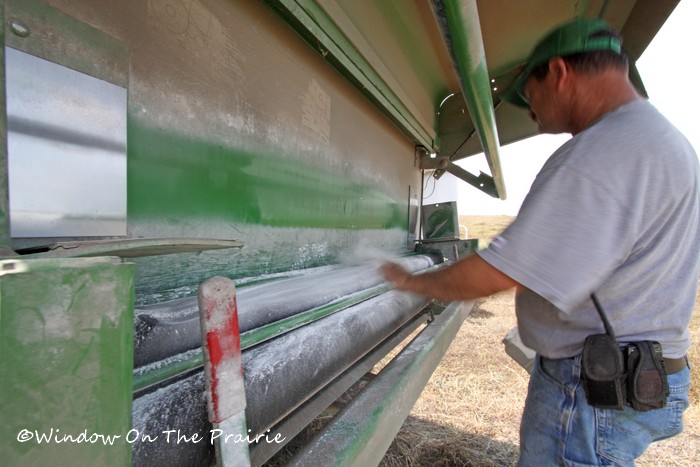 and hoisted the new roll into place: 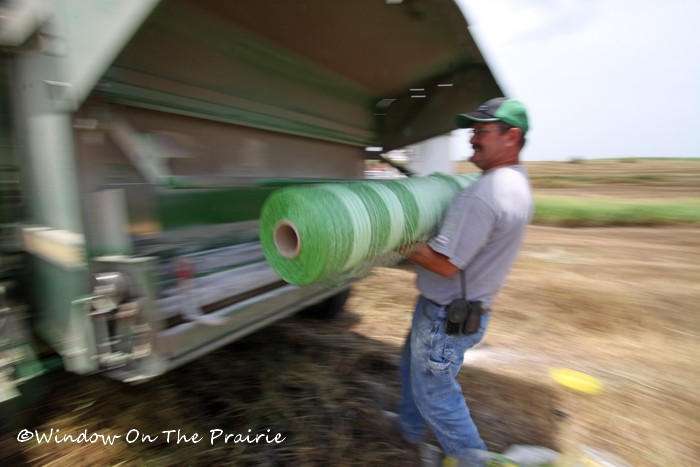 Hey, baler manufacturers:  Could this be a more awkward, hernia-inducing  process? 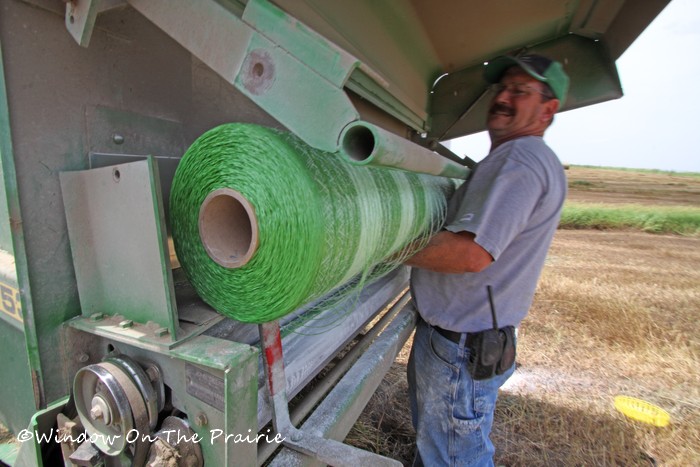 After Harland got back up off the ground from where he had collapsed from exhaustion, then he started the end of the wrap between the rollers,

closed the baler up and was back on his way baling more hay. 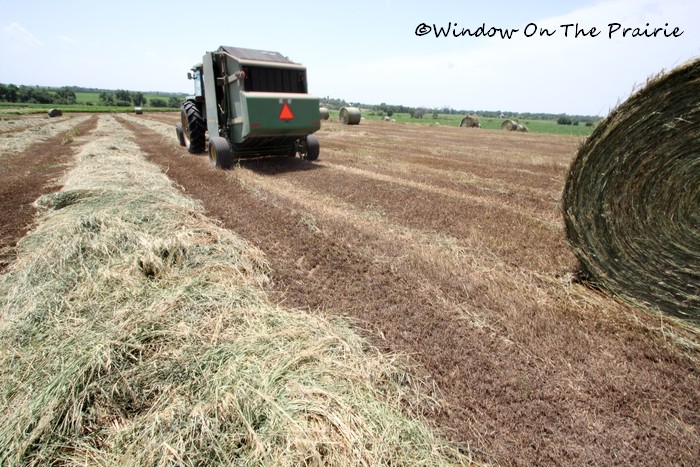 Later he hoisted me up in the bucket truck so I could take pictures of the baling process from above.