Last week I tagged along with Harland as he did the evening chores.  We hopped in the truck and went up the road about a mile to the farm.

First we checked on a cow who had had her calf earlier in the day, but hadn’t moved much from the spot where she gave birth. We were worried something might be wrong with them. 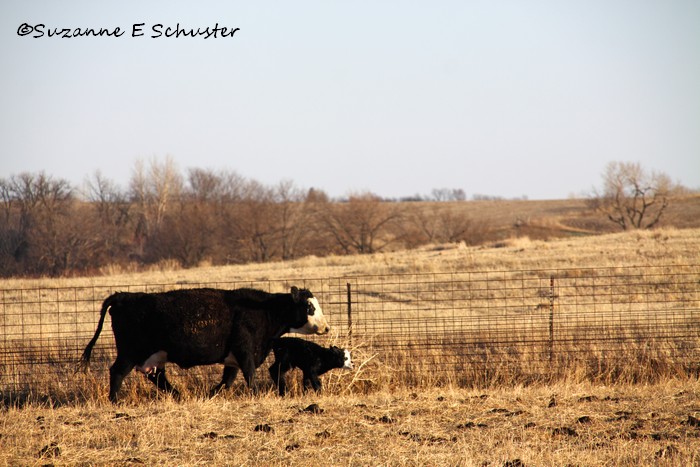 But they got up when we approached and trotted away. All ok.

Next we opened up the gate and let the cows into the hay area. During calving season, we let them eat hay in the evenings and through the night only, turning them back out again in the morning. Eating only at night causes the cows to calve more during daylight hours. And it really works. Most of them calve during the day when we are around to keep an eye on them. 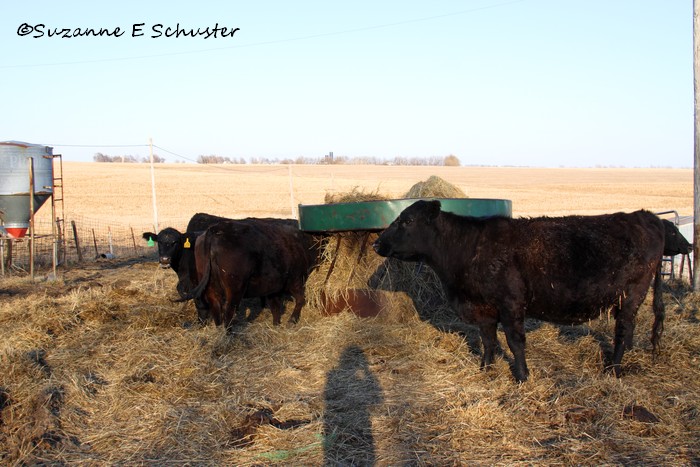 Next we walked through the cows and calf pasture on our way to one of our outbuildings. 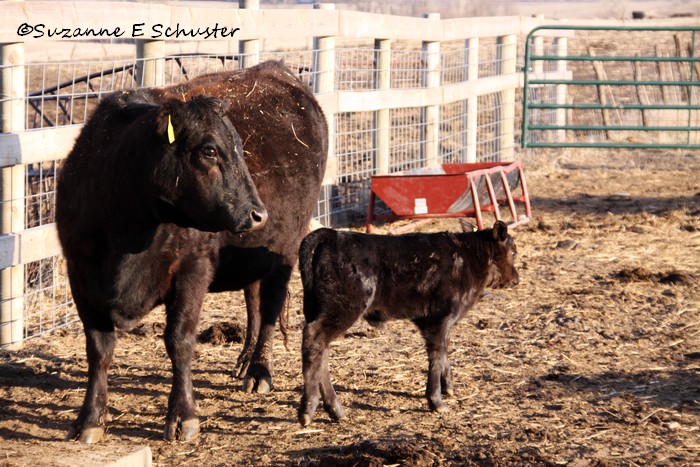 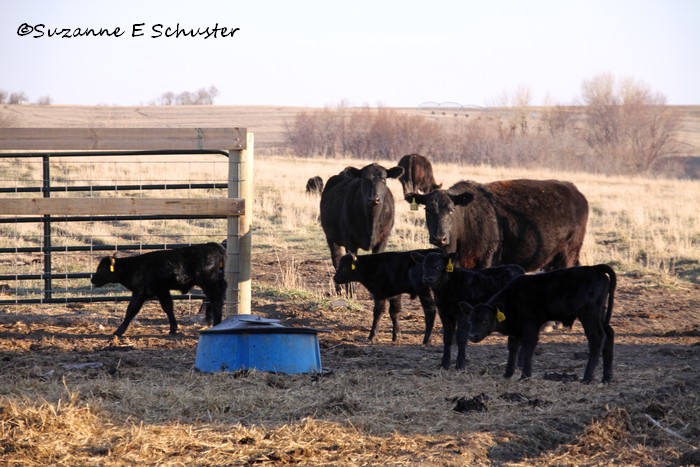 The cow below getting a drink is between 12 and 14 years old, which is old for a cow, but she’s doing well. A couple weeks ago, Harland found her off by herself away from the herd. She was laying down and grinding her teeth and drooling. She had Grass Tetany, also known as Milk Fever. It’s a disorder that occurs is cows nursing young calves in the early spring. Low magnesium levels are the cause and if not treated promptly, the cow will go into a coma and die. Harland called the vet who came out and injected the cow with magnesium and calcium. Later that day she got up and rejoined the herd. It’s a pretty quick recovery if caught in time. 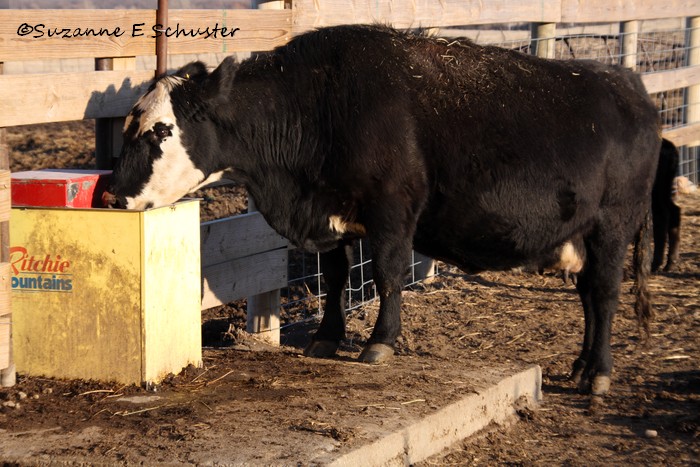 Next we paid a visit to a cow and her calf. Harland had penned them up a few days earlier when the calf was born because the calf was having difficulty nursing.  Harland upturned the bucket he was carrying and had a seat. He stared in at the cow trying to determine if her calf had nursed. If is calf nursing, the cow’s teats will be clean and smooth. 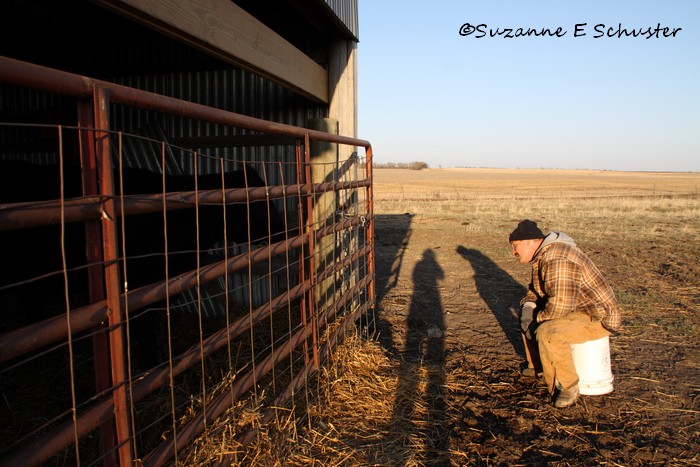 We decided the calf was nursing, so Harland let them out into the pasture the next day.

Next, Harland fed the one year old heifers their nightly grain. They will be bred by the bull in a couple months so they need to be in top condition to conceive their first calves. 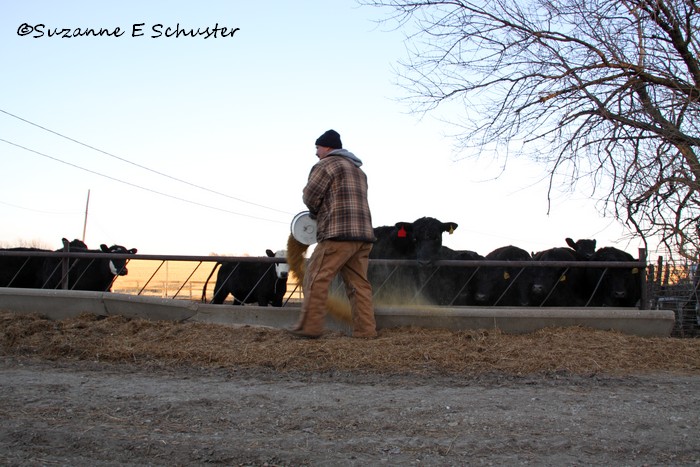 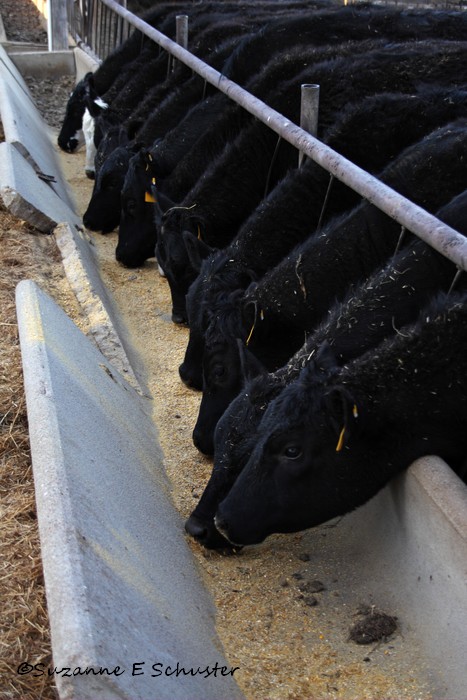 Next, Harland feeds the bulls their grain. They need to be in top condition too as they will have lots of dates with the cows and heifers this summer. 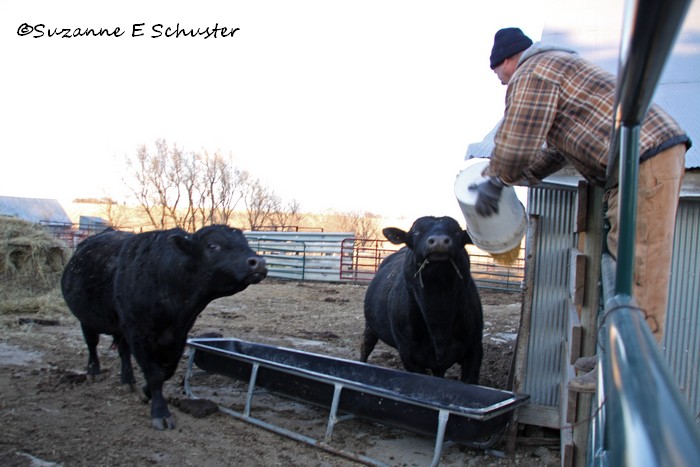 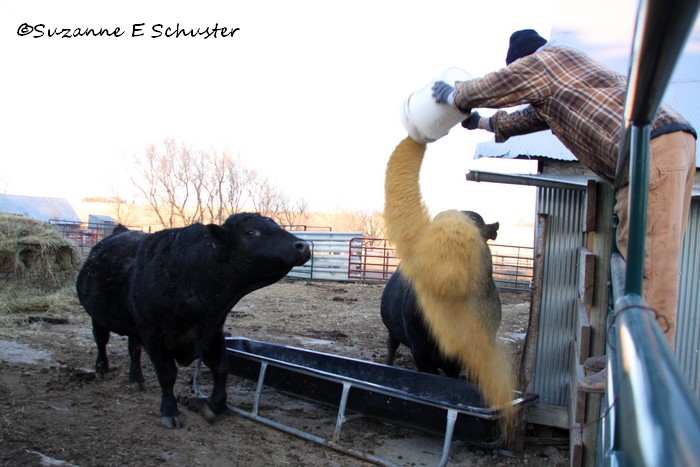 Someone always sticks their head in the way and gets dumped on.

We left the farm and headed back home. In a pasture near our house we have the 2 year old heifers and their first calves. There are just a few heifers left who haven’t calved. Everyone gets their evening grain.

This white-faced  is one of the heifers who hasn’t calved yet. It had been a sunny day and she got a little burn on her nose.  They have shade, but she couldn’t resist enjoying the warmth of the sun. 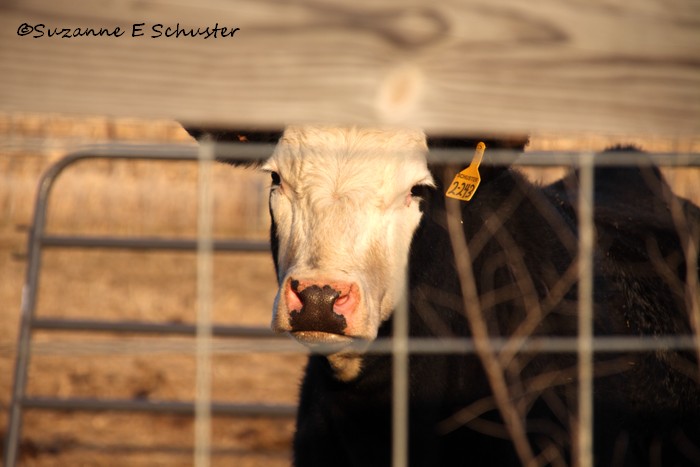 Here’s a new mom with her baby, just a couple days old. 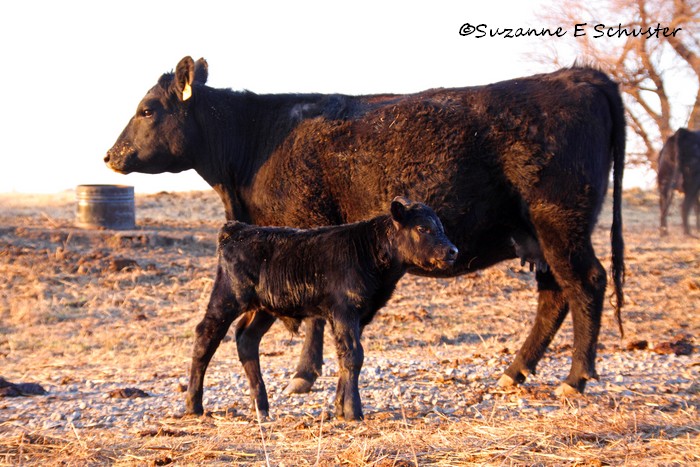 Some of the calves are now a few weeks old and play with each other much of the day. They chase each other around in circles and head butt each other. They also hop, skip, and jump about. 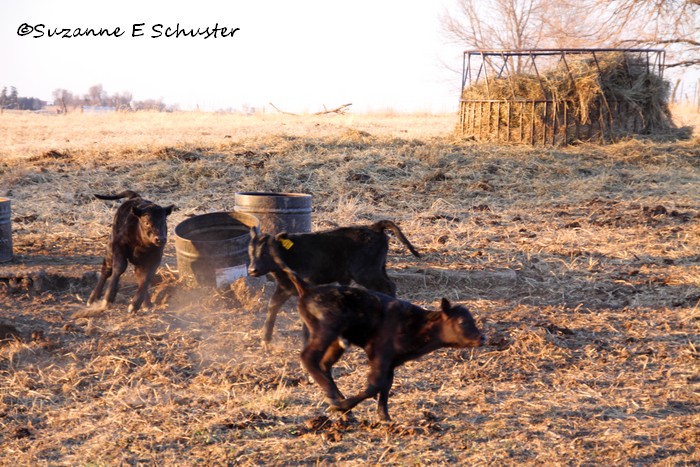 They’re very curious about us, and come in close for a look. 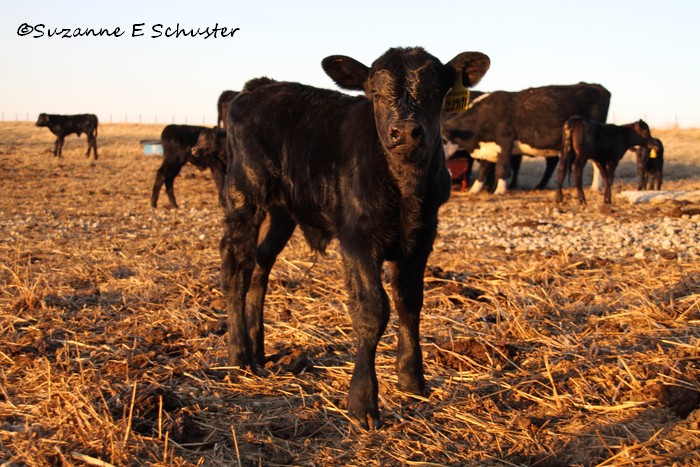 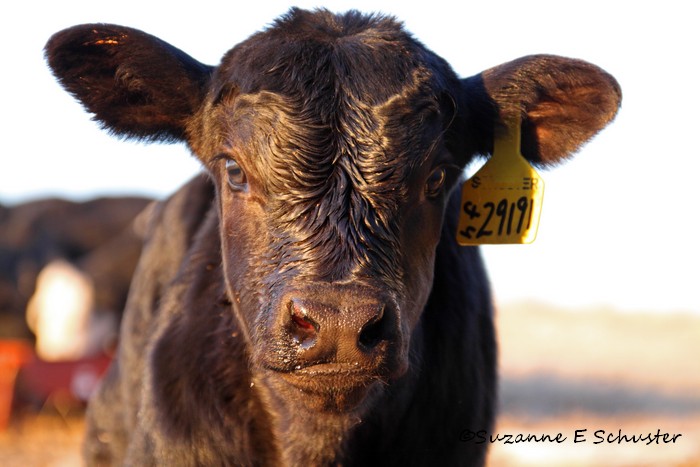 After Harland fed the grain, he stopped to watch everyone for a while. Feeding time is a good opportunity to look over livestock to see if all is well. He’s looking for illness or anyone limping. He also checks to make sure that everyone comes up to the trough for their grain. Anyone who doesn’t come up must have a problem cause they LOVE their grain.

It’s about 7:30 now and the chores are done for the day. Harland heads into the house. 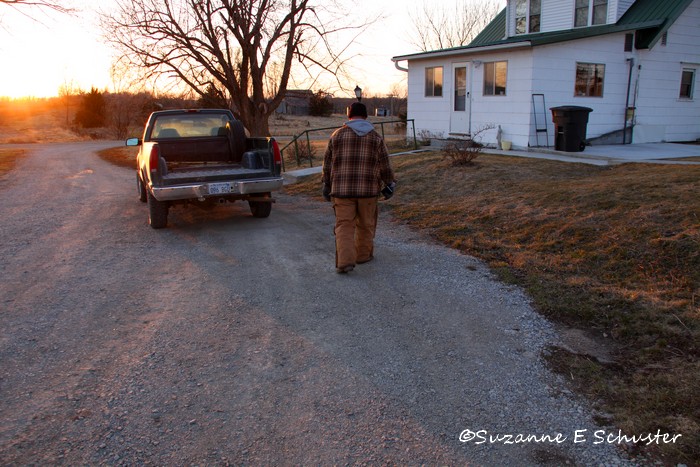 Before we go to bed at night, we check the heifers one last time to see if anyone is close to calving or has calved.  On cold nights, Harland gets up in the middle of the night to check the pregnant cows and heifers. Cold can kill newborns in just a matter of hours. We’re more relaxed now that winter is over and it’s a little warmer.

Thyroid Update:  So I had my consultation appointment with my new endocrinologist at KU Med Monday and it went very well. The staff were professional, the doctor was knowledgeable and listened well. He started me immediately on a med that stops my thyroid from making any more thyroid hormone (mine is overactive and has been churning out thyroid hormone like crazy for a last few months).  The med is not a long term solution, so the doctor has recommended radioactive iodine therapy which will kill the thyroid. It sounds primitive, but it’s a treatment that’s been around for over 50 years and is effective. My appointment is in two weeks. The thyroid hormone that is already floating around in my system has a long half life and will stay with me for about 6-8 weeks, so I won’t be feeling better for a little while, but I’m very pleased and relieved that I’m making progress towards getting better.