Later today, we’ll be releasing Daisy and her new Mom out of the barn and into the pasture. We’ve kept an eye on them for the last couple days and not only has Daisy’s mom truly accepted her as we hoped, she’s now become very defensive of her baby. Every time I enter the barn she shakes her head up and down at me, flinging lots of snot around. She also paws the earth like a bull getting ready to take out a bullfighter.

Both these actions are cow-speak for “I hate you, get away from me and my baby!!!”

We’re quite pleased that she is taking her role as Mom so seriously, but can do without the dramatics. I’ll take a video of their release into the pasture to share with you.

Nothing has changed with Donald and his “Mom”. 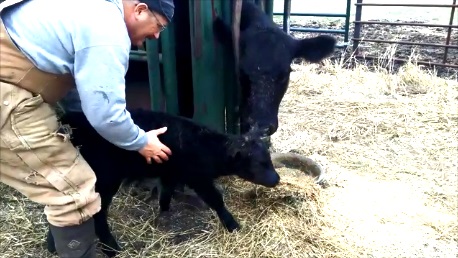 For the last three days, besides using molasses and grain, we’ve been trying a product called “Orphan No More”. It’s a smelly powder that when sprinkled on an orphan calf is supposed to elicit feelings of motherhood on the part of the cow.

After both of them were put back into the shed, Harland turned Donald in with the cow to see what she would do. Donald, bless his heart, headed straight for her udder. The cow wasted no time in expressing her opinion of him by swinging her head around at him and kicking him. Harland removed the cow from the pen.

“Orphan No More” should be renamed “Orphan No Less”.

But we’re not ready to give up just yet. We”ll give it a few more days. You never know.

Here are the scores to date:

Come back soon for a video of Daisy and her Mom heading out into the pasture together for the first time.