Yesterday afternoon, Harland brought Daisy and her new “mom” to our house and put them in the barn. The cow is kinda laid back so rather than go the chute route, he put Daisy in with her to see how they would get along. Daisy immediately made a beeline for the cows udder and went to work nursing. The cow made some half-hearted attempts to evade Daisy, but Daisy is a persistant aggressive calf and kept chasing the cow down and latching on. Then the cow tried a few head butts and feeble kicks at Daisy, but she persisted on with her nursing. The cow knew it wasn’t her calf, but wasn’t very determined to get rid of Daisy, which is good. And Daisy’s attitude was, “Do whatever you want to do “Mom”, you’ve got milk and I’m going to drink it no matter what you do to me.” Harland stood by and watched as Daisy filled her tummy. Newborn calves are so skinny you can watch their tummy expand as they eat. After he was satisfied that the cow wasn’t going to harm Daisy, he went on about his day.

Last night after I got home from work, I started a pot of chili and then headed out with Harland to work on bonding Donald with his new Mom.

We drove up to the farm and when we got there Harland collected a bucket of grain which I carried while Harland collected Donald from his pen and together we went out to the building where Donald’s new Mom had been put. She is a rather excitable cow, and as we approached she looked for a way to escape out of her pen and into the pasture. She measured the walls peering over them to see if she could jump out. The walls are up over her head so that’s a no-go. I’ve seen cows even stare up at the ceiling looking for a hole there they can jump out of. In their minds, cows aren’t 1200 pounds of bulk, they think of themselves as nimble deer.

Anywho, we put Donald in a separate pen, and then I stood outside near the chute while Harland drove the cow into it. It was a first for her and she looked it all over before entering. Harland closed the gate behind her and then she stuck her head through the front of the chute hoping to escape but it closed on her and she was caught. She thrashed about for a minute and then settled down when Harland gave her some grain.

Next, we brought out Donald and put him alongside the cow in front of her udder. 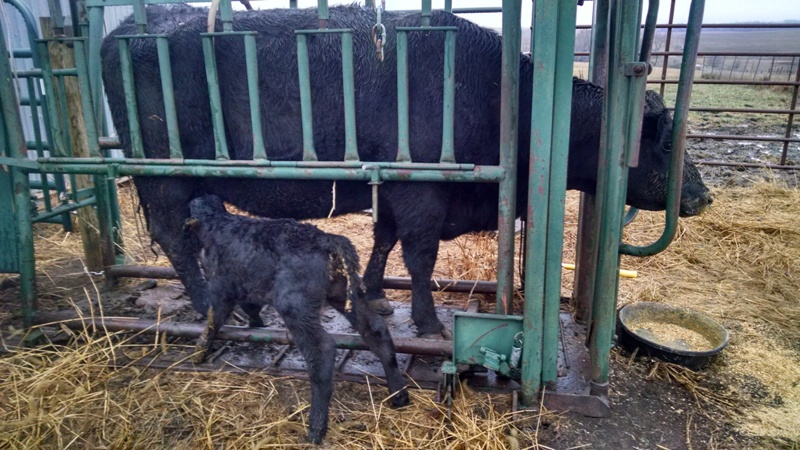 Surprisingly, with just a little guidance from us, he figured out pretty quickly how to nurse.

After about a half hour, he had nursed the cow’s udder down and his little tummy had filled out. He now knew how to nurse and that’s half the battle won.

Next, we needed to gauge just how hard it was going to be to get the cow to accept Donald as her own. Harland released the cow back out of the chute and into the barn. Nervously, we put Donald in with the cow in the same pen. Donald immediately headed for her udder to nurse. As he got close to her she reacted. First she flung her head at him attempting to toss him across the barn. He stepped back for a second and then approached the udder again. Then she began kicking with her back feet. Fortunately all she made contact with was the barn wall. Over and over and over she kicked the wall. She was really pissed. If she could have spoken, she would have said,

Me, thinking to myself, “Soooo…I guess this means you aren’t going to accept adorable Donald, huh B****?”

So Harland let the cow out of the pen. We set them up in adjoining pens and headed home for supper. It was now 8pm. What a long dismal day.

This morning, Harland drove Donald’s mom into the chute again and gave her grain as Donald nursed. At first, he was so excited (OH BOY, MILK!!) that the couldn’t latch on. Harland guided him in the right direction, and Donald proceeded to drink from each of the cow’s teats filling his little tummy up. As he nursed, the hostile cow from last night thawed a little and made maternal sounds. Low comforting moos to the calf. Well, that’s an improvement. Harland smeared some mollasses on Donald and brought him up to the cow’s head. She licked him, or tried to. After last night’s head-butting kickfest, Donald is kinda afraid of her and doesn’t want to be near her head. Harland released her and Donald back into adjoining pens. We don’t trust her to be in the same pen yet, but she did behave better towards him this morning than last night.

Things with Daisy took a downward turn though this morning. Her new ‘mom” is being more aggressive in her attempts to get rid of Daisy. Daisy is still chasing “mom”around the pen and getting enough to eat, but we’re not pleased that the cow is more hostile towards her than yesterday.

Here’s a short video I took this morning before I left for work:

The maternal low mooing you hear is not coming from Daisy’s ‘mom”. That’s the loving cow in the next pen with her newborn calf.

This morning, Harland fed Daisy’s “mom” some grain so she would stand still long enough for Daisy to get a nice peaceful breakfast. He’ll keep an eye on her today and if it looks like she’s going to hurt Daisy, he’ll separate them.

Here’s how things stand so far:

So it’s a day by day thing. In a few days we’ll know for sure how things are going to work out.

If you’re interested in learning more about cow/calf bonding, HERE’S a great article to read.