Hauling The Corn To The Elevator 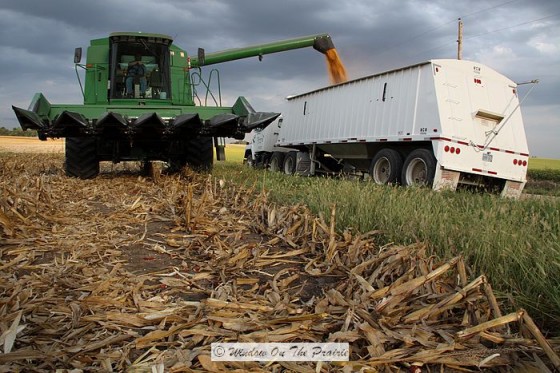 Yesterday we took a ride in the combine harvesting corn, and unloading it into the grain truck. Since the truck is full, we have to take it to the grain elevator in town to unload. So come along for the ride. 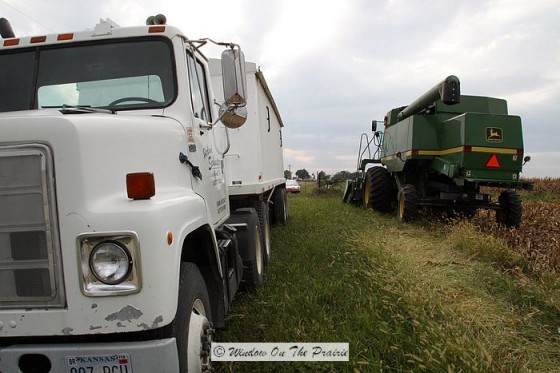 Your truck driver today is Harland, better known this time of year as the “Slayer Of Corn”. 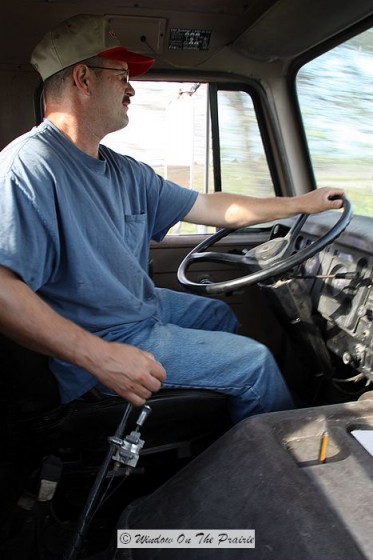 It’s a short scenic drive to town, only about 3 miles. Our neighbors are all bringing in their corn too. This neighbor has a red combine. 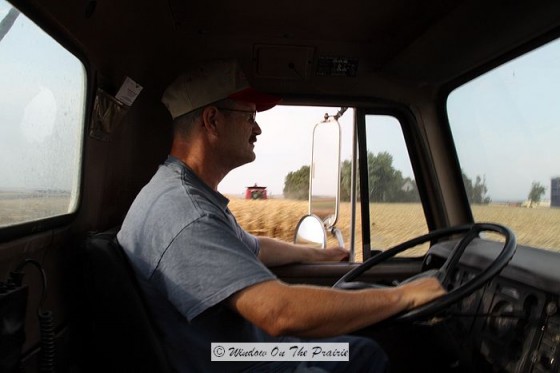 When we arrive at the elevator, there are already 2 trucks ahead of us. 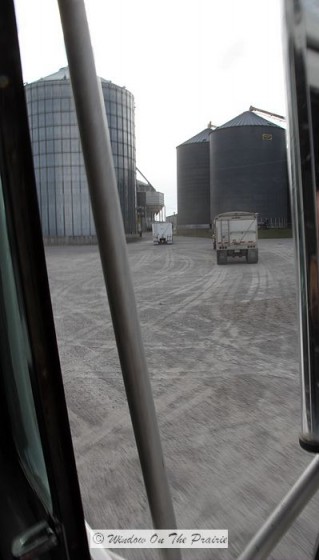 While we’re waiting in line, we have time to watch others as they unload their corn. Here, one truck unloads while another waits behind. 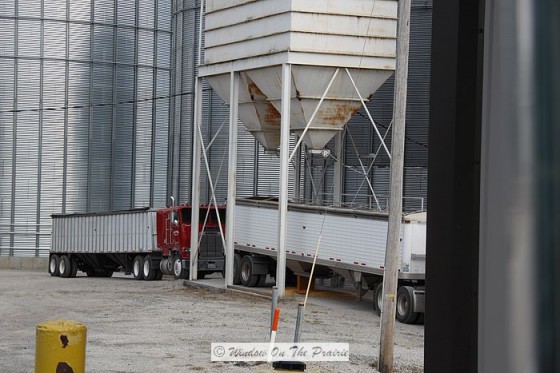 The trucks have a trapdoor on the bottom. A lever is pulled, and the grain flows out of the truck and down into a “pit”. From there, it is moved into the grain storage bins you see here. 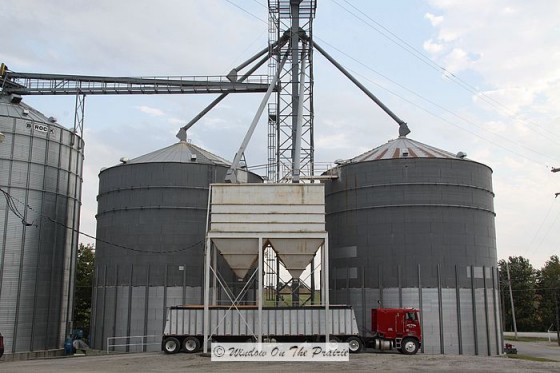 Finally, we’re next in line. First, we have to drive onto a scale to be weighed. The truck is weighed before and after unloading to determine the net weight of the corn. In this picture, the truck ahead of us is on the scale.  (The scale platform is the light blue square under the truck.) 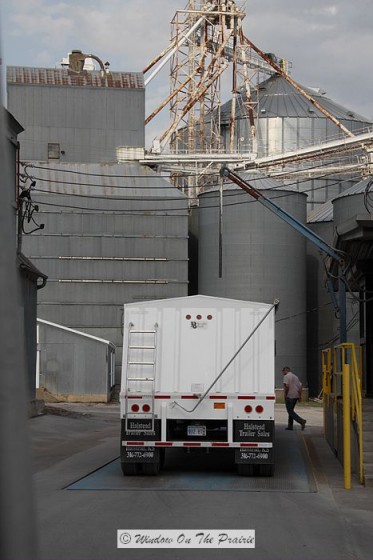 There’s a small office up the steps to the right where the weight is recorded in a computer.  Our truck is weighed next, and then we pull ahead to unload. 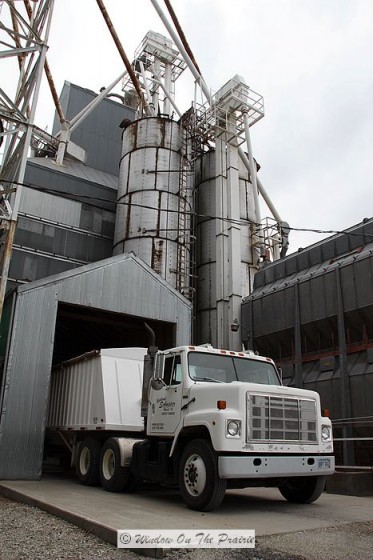 Harland positions the truck so that the unloading door is over the grate in the concrete above the pit. 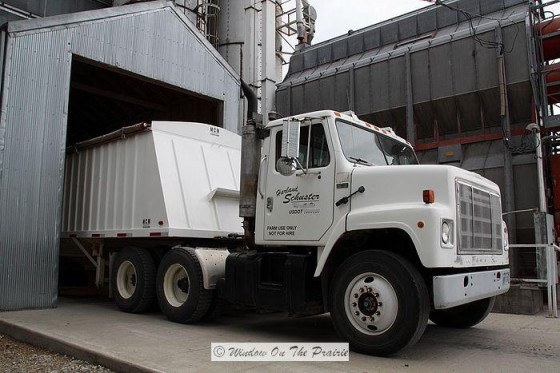 An employee at the elevator opens the trap door, 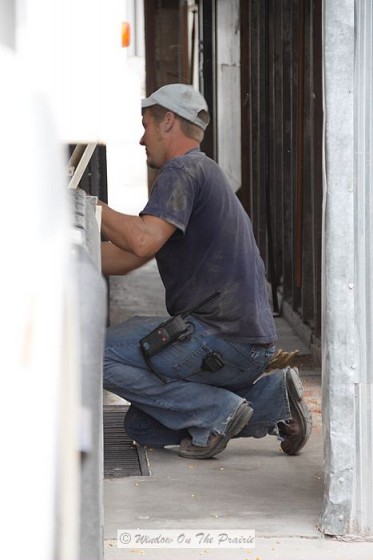 and the grain begins to flow out into the pit. 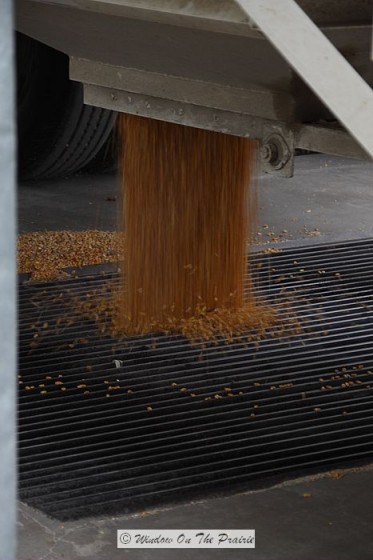 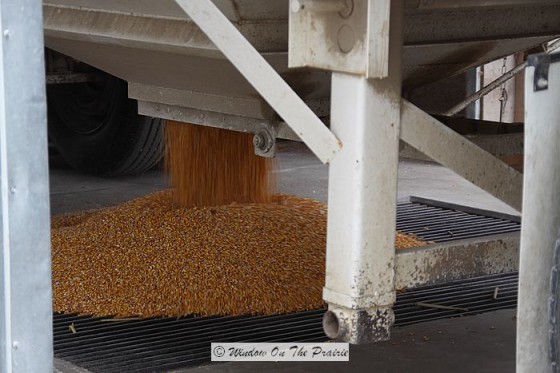 Sometimes it piles up some, but it will all go down eventually.  Workers sweep into the grate any corn that misses with a push broom.

Harland waits in in the truck while 700 bushels or 20 tons of corn are unloaded. It only takes about 5 minutes. 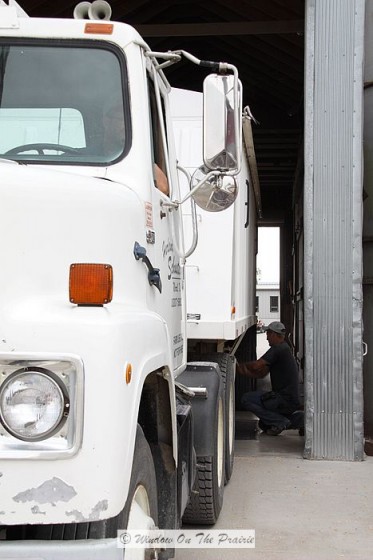 After unloading, we drive back around to the scale to be weighed again.I couldn’t get out of the truck to take a pic because my weight was included in the weighing before unloading, so I got a pic from my window looking at my side mirror.  See the light blue of the scale platform under us? 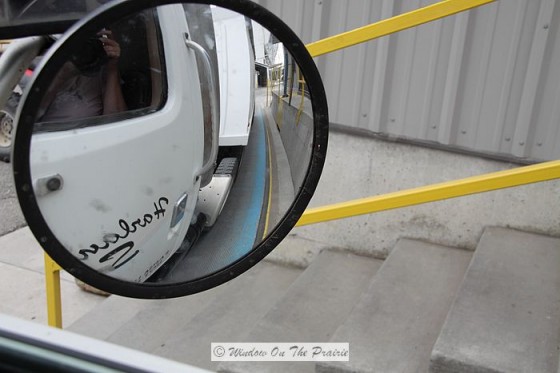 After weighing, Harland goes into the office to collect the receipt. 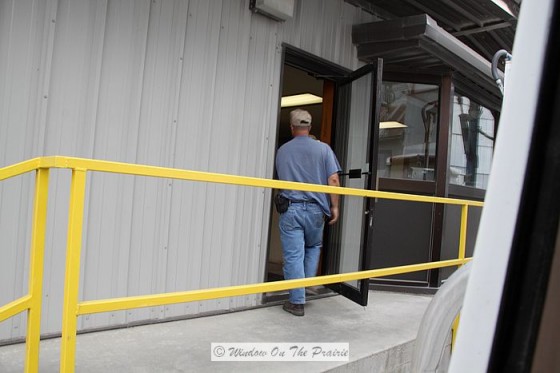 Afterwards, we head back to the field for more harvesting, where Harland takes a quick look at the receipt. 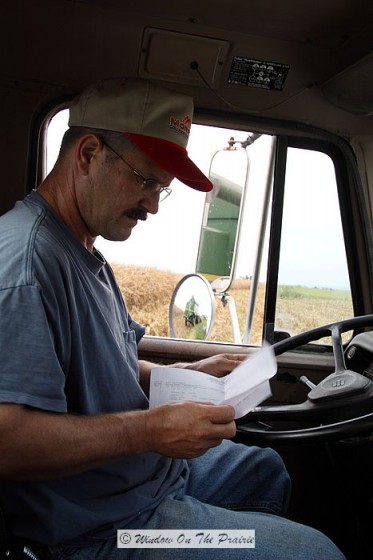 We sold this corn to the elevator back in May promising to deliver upon harvest. Farmers can either sell grain ahead of the harvest, at harvest time, or store it at the elevator and sell it later. It’s a matter of watching the grain market, and selling when the price is up.

Thanks for coming along on the truck today. Please make sure to stop by the gift shop at the edge of the field. (tee hee)

Up Next:  Homemade Swiss Braided Bread. Warm, buttery, and pretty too. 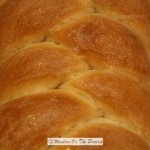