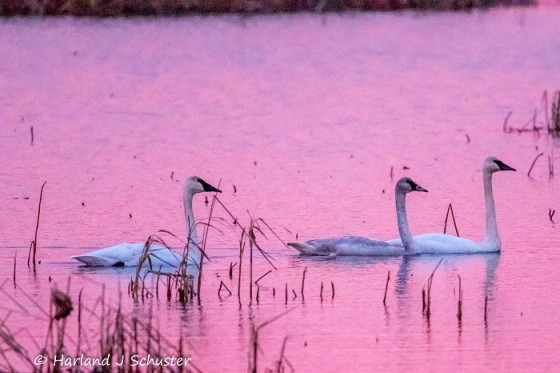 Several years ago, we saw our first trumpeter swan at Squaw Creek National Wildlife Refuge. We were thrilled and stared in disbelief at it’s size and beauty.  Over the last few years, we’ve been seeing more and more of them there. According to the refuge’s latest weekly bird count on December 15, there are 520 of them there, resting and feeding on their southward migration.

According to the Cornell Lab of Ornithology:

Trumpeter Swans are our biggest native waterfowl, stretching to 6 feet in length and weighing more than 25 pounds—almost twice as massive as a Tundra Swan. Getting airborne requires a lumbering takeoff along a 100-yard runway. Despite their size, this once-endangered, now recovering species is as elegant as any swan, with a graceful neck and snowy-white plumage. They breed on wetlands in remote Alaska, Canada, and the northwestern U.S., and winter on ice-free coastal and inland waters.

Trumpeter Swans form pair bonds when they are three or four years old. The pair stays together throughout the year, moving together in migratory populations. Trumpeters are assumed to mate for life, but some individuals do switch mates over their lifetimes. Some males that lost their mates did not mate again.

Pairs stay together throughout the year and often migrate and winter in family groups and with other waterfowl, including Tundra Swans, Canada Geese, and Northern Pintails.

Despite being driven nearly to extinction in the early 20th century, Trumpeter Swans have rebounded and their numbers are increasing. Widespread hunting for meat, skins and feathers from the 1600s–1800s had reduced this once widespread species to 69 known individuals by 1935, although isolated pockets of the birds also survived in Canada and Alaska. Hunting them is now illegal throughout the U.S. Between 2000 and 2005 a continent-wide survey found that Trumpeter Swan numbers had more than tripled, from 11,156 to 34,803.

Here’s a video I took of the swans at the refuge last week. In the first half, there’s a lot of noisy socializing going on and some rather heated disputes too. The second half of the video is of a family group – two all-white parents and their four grey juvenile offspring, all of them resting and preening:

There are more birds to come from our trip to the refuge – stay tuned everyone.

Have a great weekend!