St. Mary’s Church – A Wonder On The Prairie 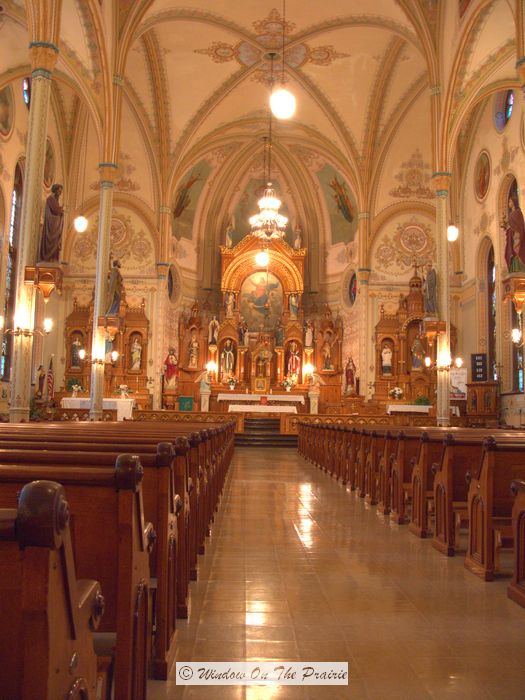 St.Mary’s church in the tiny town of St. Benedict, KS  is one of our favorite churches to visit. Harland (hubby) and I consider it to be the most beautiful we have seen, and we aren’t alone either, as it has been voted as one of the  8 Wonders of Kansas. But we personally have another reason why this church is so special, and it has to do with this bench, 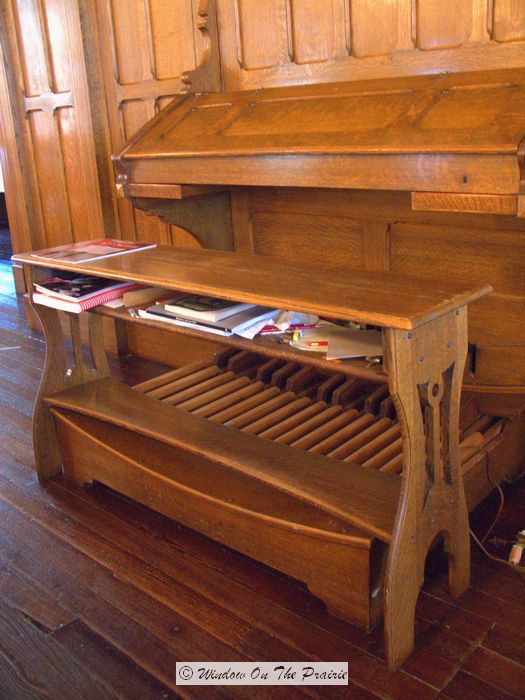 in front of this organ, 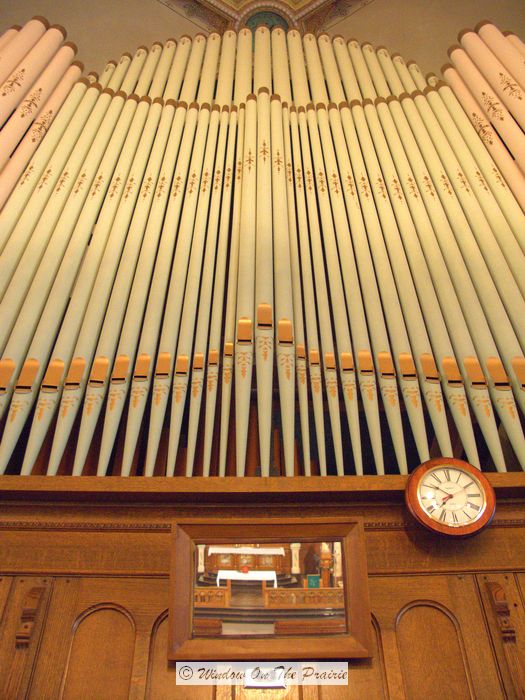 and…… I’ll tell you the rest of that story in a minute. But first, let me tell you about this lovely church. St. Mary’s parish was established in 1859. The Oregon Trail passed  by only 2 miles to the north.  The growing parish outgrew the 1st three churches they constructed, and so in 1891, work began on the 4th church to occupy the site. Constructed of native limestone, each family was assigned a specific number of wagonloads of limestone that they were responsible for hauling from a local quarry to the building site. Two hundred stone masons worked the rock.  Eight cast iron columns were made in a local town. A local carpenter did the carpentry work including making the pews. The church was was completed in 1894. 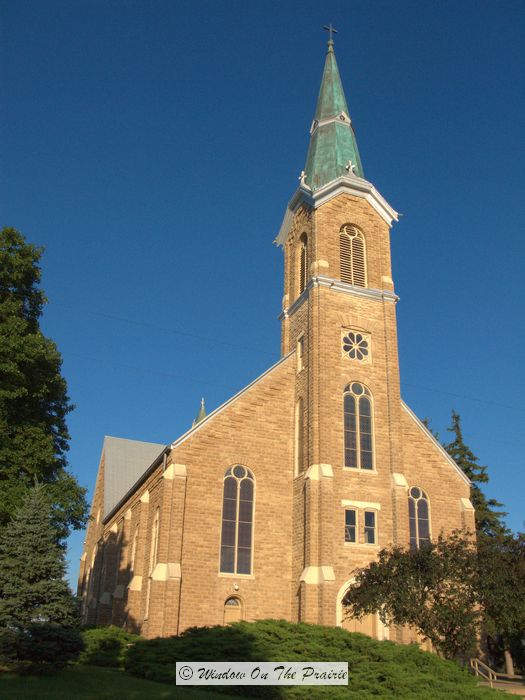 It measured 162 feet long by 60 feet wide, and the ceiling 52 feet high. The church cost $40,000, and was paid for upon competion. On November 14 of that year, the church was formally dedicated by the bishop. After the dedication, the celebration continued until midnight with a brass band, a meal provided by the ladies of the parish, a dance, and fireworks.  In the next few years, another $40, 000 would be spent to complete the interior of the church. In 1895 a used pipe organ was purchased in Atchison, and 4 new church bells were purchased from St. Louis. In 1899 the main altar, 40 feet in height, was built by a carpenter in Leavenworth, and installed. In 1900, the 2 side altars and communion rail were purchased from a company in Wisconsin. 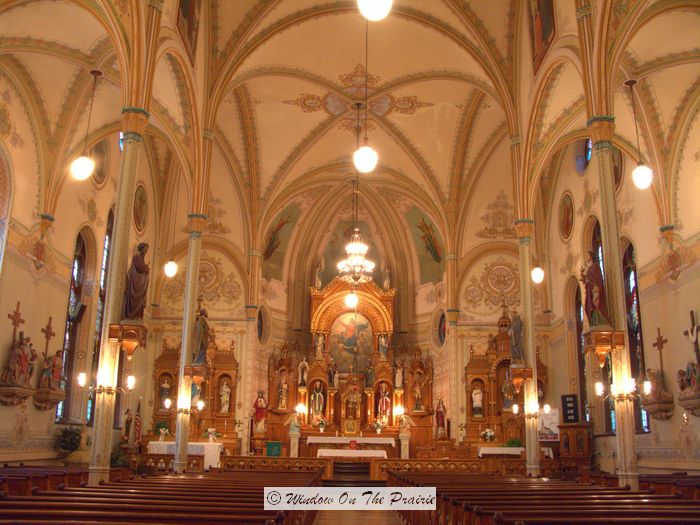 In 1901, G.F Satory did the lovely decorative stencil work all over the interior of the church. 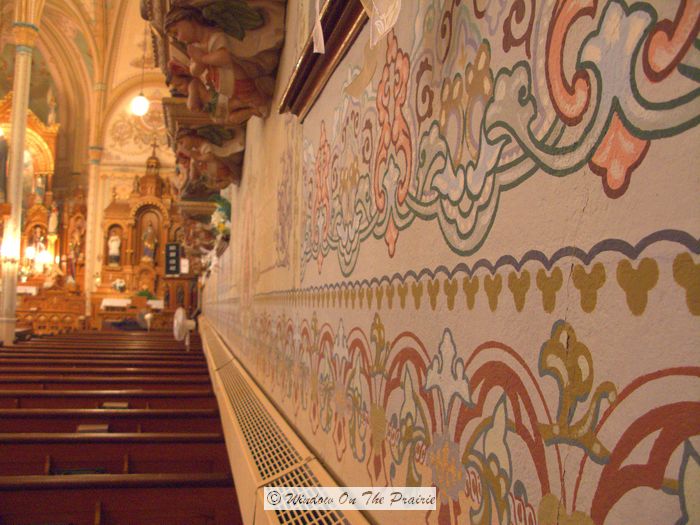 In an interview many years later, he expressed regret that his work was a lost art, and indeed, of the 150 churches he decorated, it is believed that St. Mary’s is the only church where his work survives. 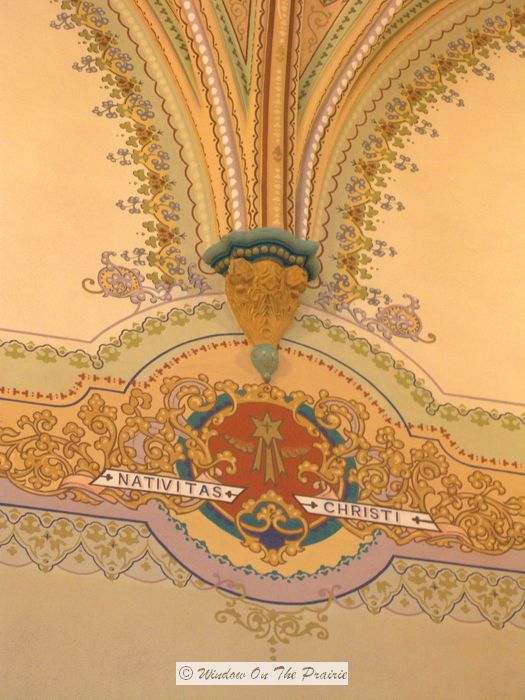 Also in 1901, the church was decorated with 14 large oil paintings. Statues were also purchased from Munich, and installed throughout the church. 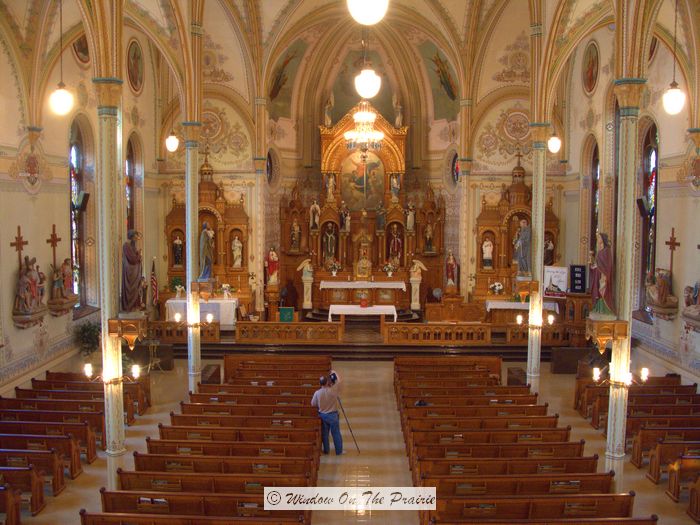 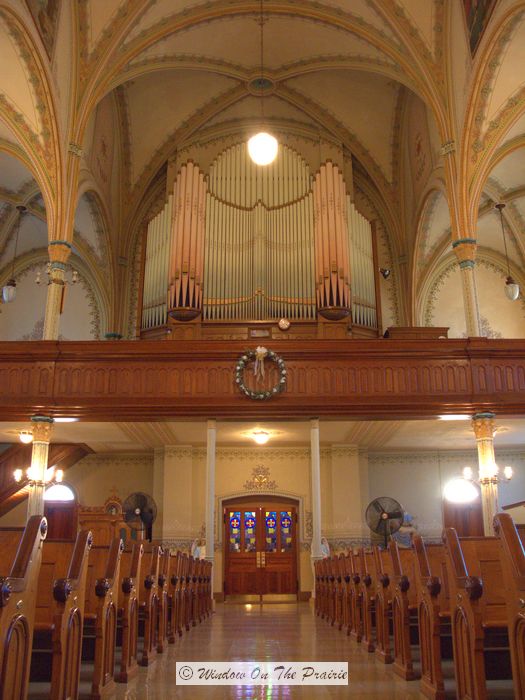 The 3000 square feet of window space was filled with 25 windows: some stained glass, 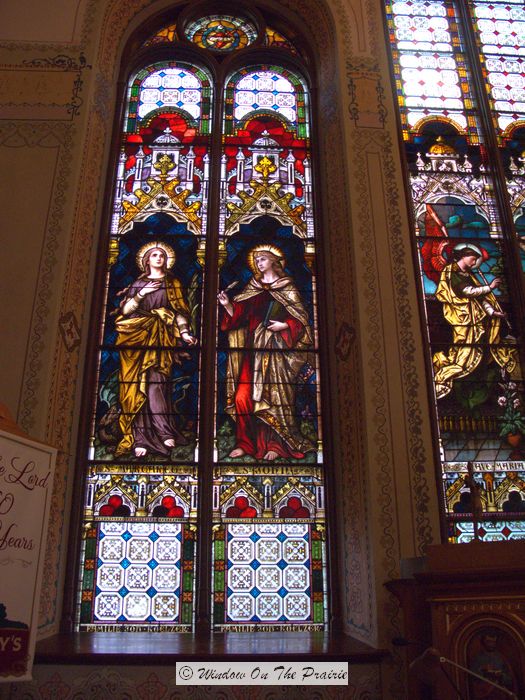 and the rest art glass. 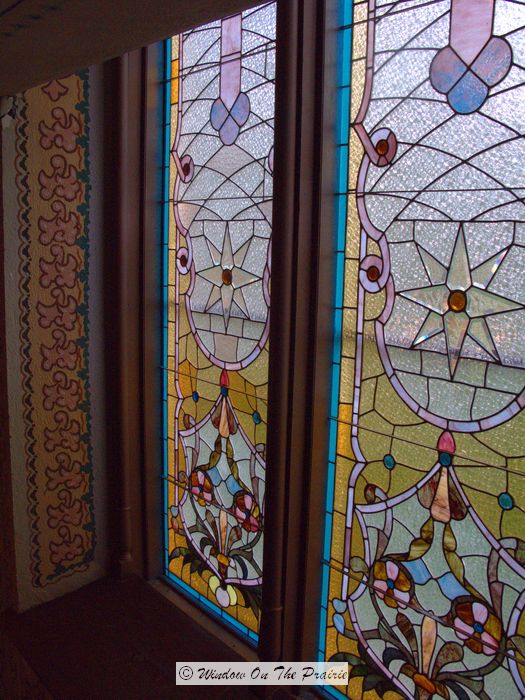 The furnishing of the church was finally completed in 1916, and has changed little to this day. In the late 1970s, because of damage to the plaster walls, and a build-up of dirt and grime, it was necessary competely redo the stenciling. Careful tracings were made, the plaster was then repaired and painted, and the stenciling reapplied. The work was started in 1979, and completed in 1983.  In 1980, St. Mary’s was named to the National Register of Historic Places.

I love everything about this church. From the adorable angel statues by the door, 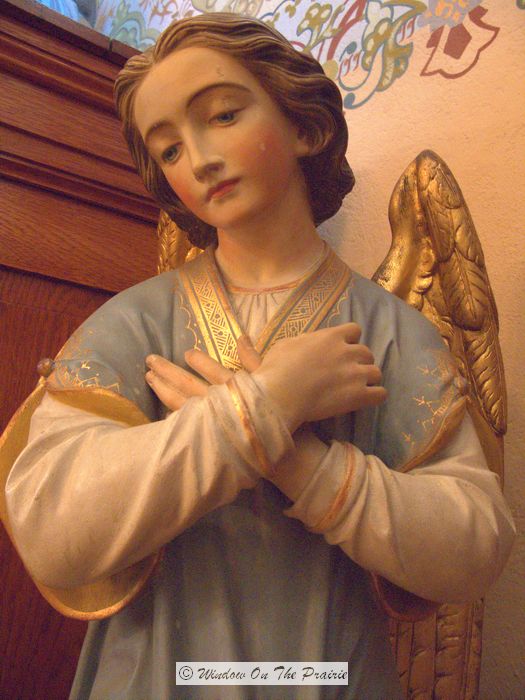 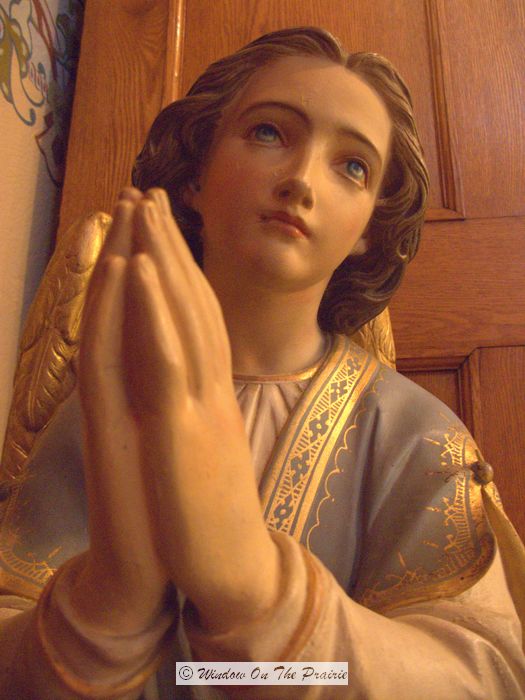 to the intricate detailed woodcarving, 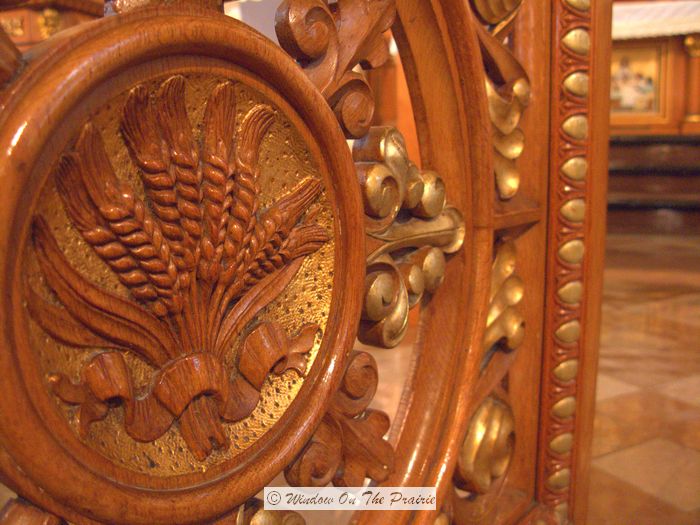 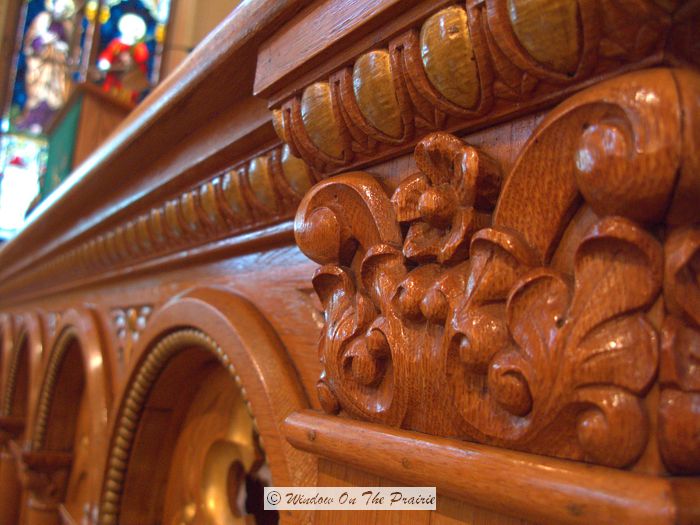 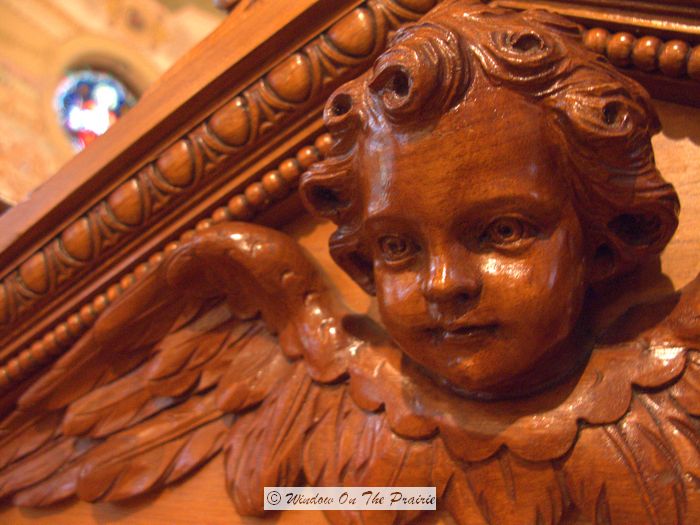 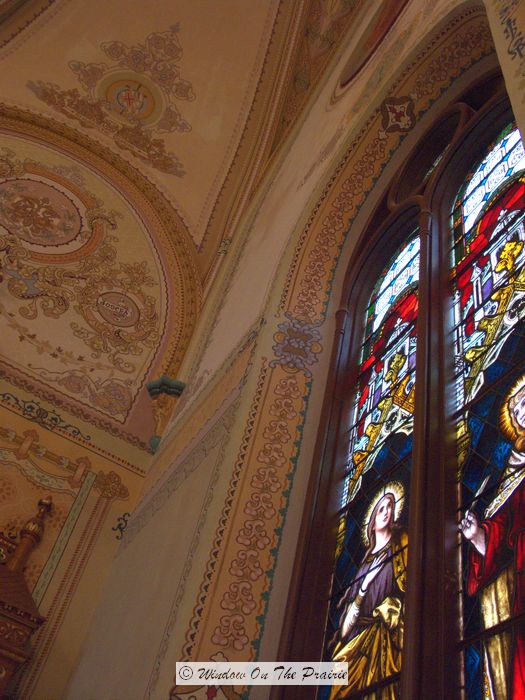 I love this working light fixture, a 3 foot high angel holding a lamp. There are 2 of these in the balcony. 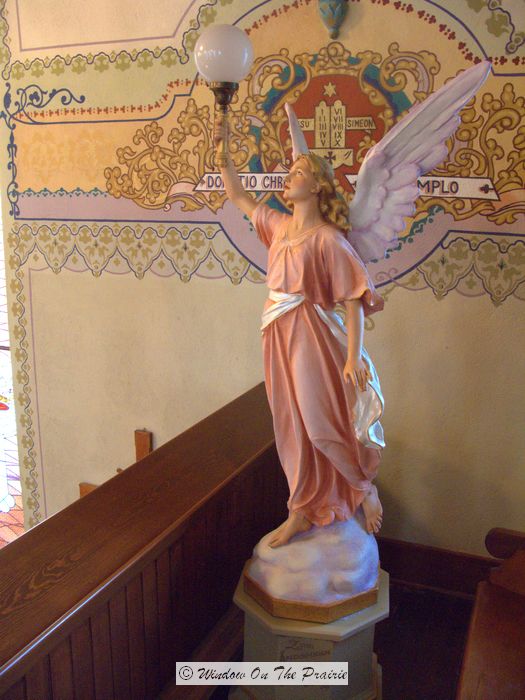 And these little cherubs look so stern. 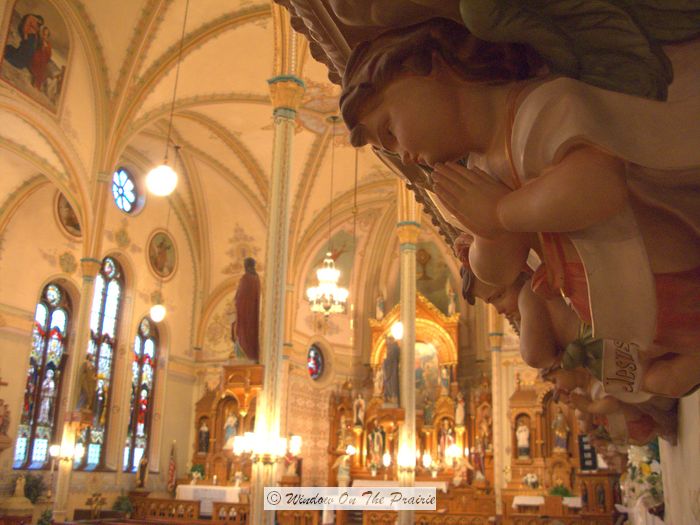 Ok, so I’ve left you hanging long enough about the bench in front of the organ. On February 11, 2007, Harland and I spent part of our first date sitting on the bench talking and getting to know each other. And here we are today, 2 fools in love, and married for nearly 2 years now. 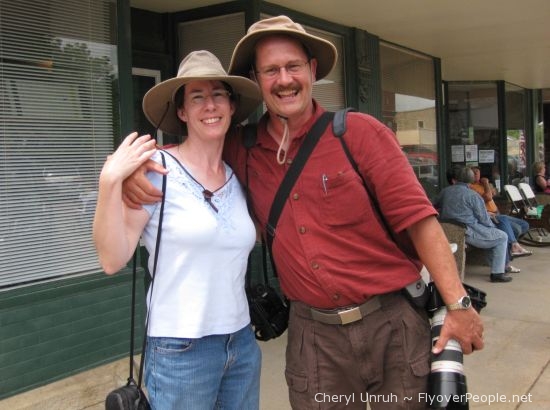 For more information and pictures of the church, you can visit their website here.