Last Saturday morning, our bedside alarm went off at 3:30AM. We crawled out of bed, dressed, grabbed our photo gear, and stumbled out the door into the pre-dawn darkness. We drove over an hour west, finally turning off the highway and onto a dirt road. A few more miles led us to a familiar spot in the road bordered by willow and cottonwood trees. We strapped our photo gear backpacks on, tucked a tripod under one arm and a portable hunting blind under the other arm. Harland put on a headlamp and trudged off into the field. I followed along.

After what seemed like a couple miles when my arms were stretching out of their sockets, Harland announced we had arrived at the right spot. We were at the top of a hill covered with last year’s soybean stubble. I gratefully dropped my gear to the ground, but didn’t rest for long. A dim light was growing off to the east. I set up my blind, put my tripod inside and all my gear, and then crawled inside myself. Harland did likewise a short distance away. We settled down and waited.

Out in the darkness, a turkey gobbled…. A pheasant called…. A coyote howled and another answered back.

I began to worry…what if they didn’t show up ….what if we had set our blinds up in the wrong place?

We continued to sit in the darkness…waiting.  Finally, we heard a flutter of wings, followed by a “wa doo woo woo woo”. I peeked out into the grey- blue dawn and could just make out a male prairie chicken with his neck feathers raised and orange neck sac puffed up.

For two months each spring, male prairie chickens display to attract females and fight for dominance with other males. The display ground, or lek, is a particular hilltop used year after year, possibly for hundreds of years. The males arrive on the lek in the predawn, the females sometime later. The male at the top of the hill in the center of the lek is the dominant male, with the less dominant males radiating outward down the hill, the least dominant at the outer edge of the lek. Dominance is what every male fights for because 90% of the females will be bred by the dominant male.

Every year Harland and I visit the lek to watch the show. Here are a few from last Saturday: 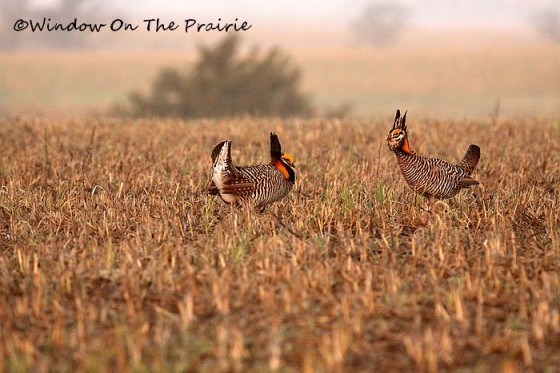 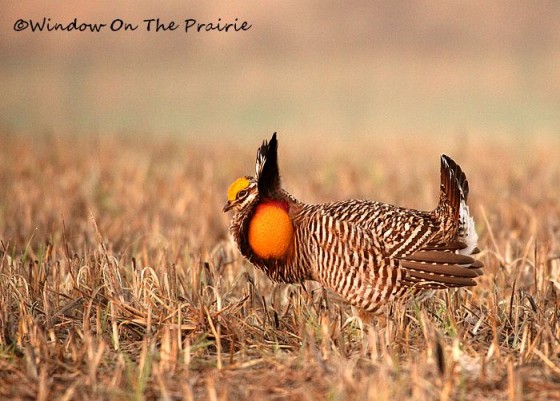 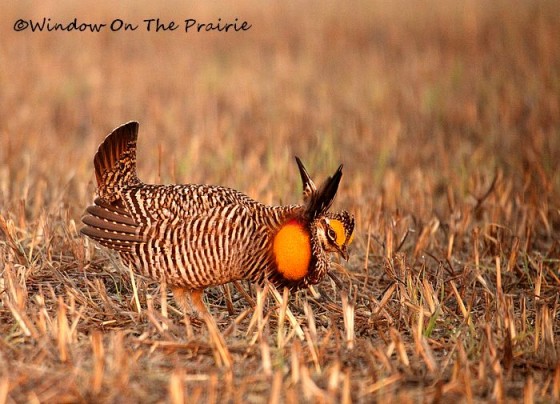 A male calls out to attract attention: 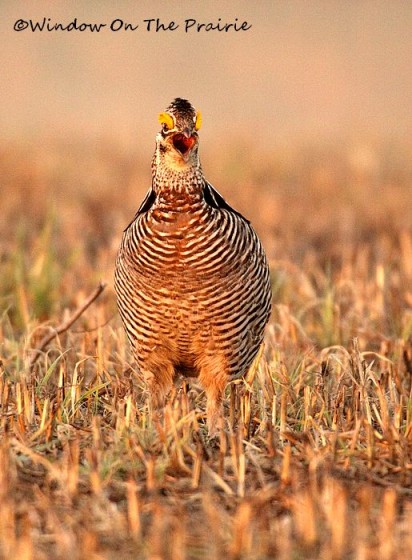 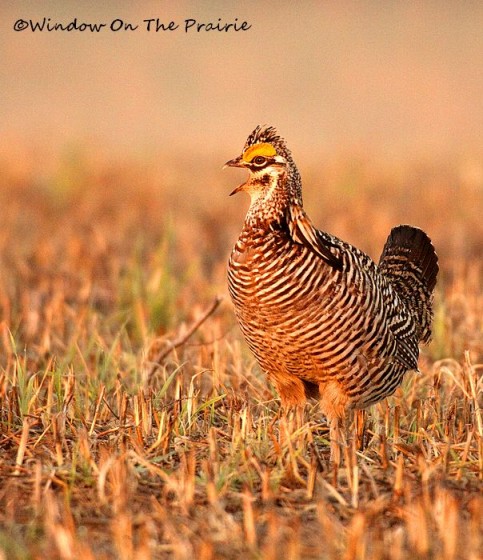 A male flies up into the air a few feet and comes back down. “Look at me!” he seems to be saying. 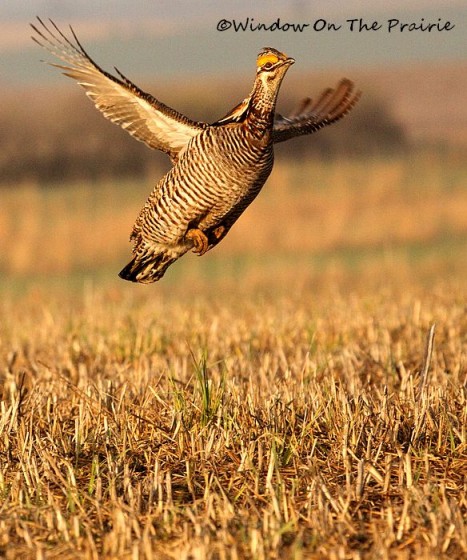 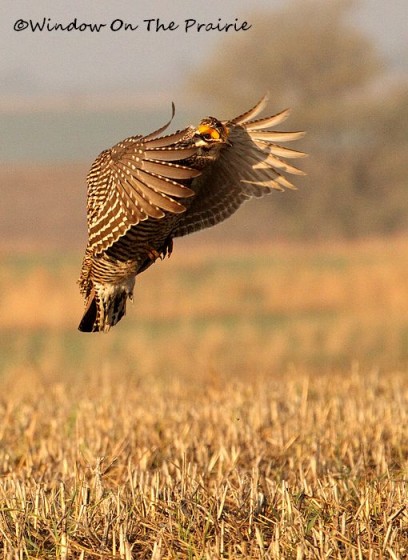 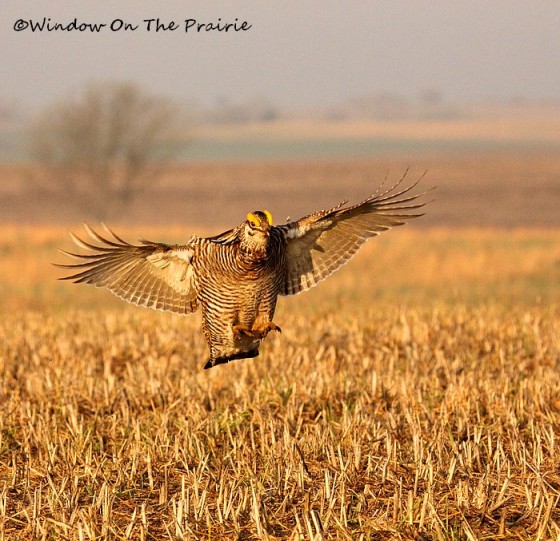 The comparatively drab grey females finally arrive, and the males turn on the charm full-blast: 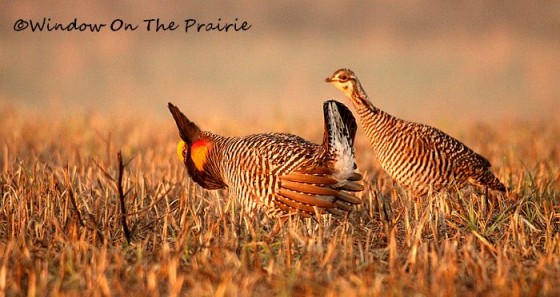 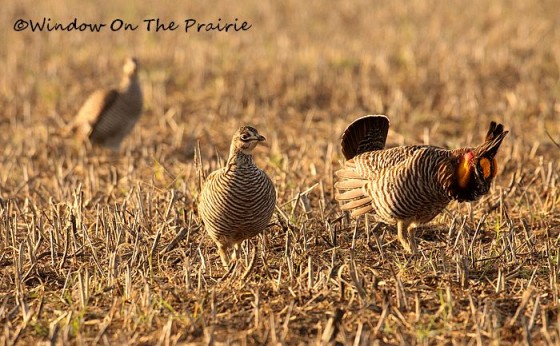 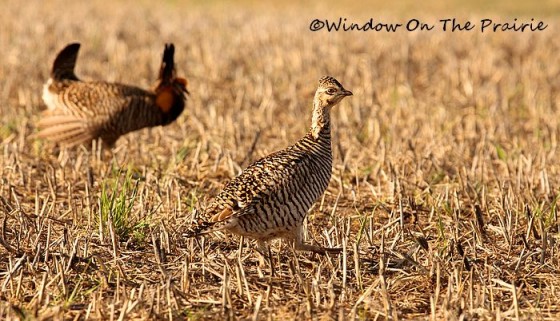 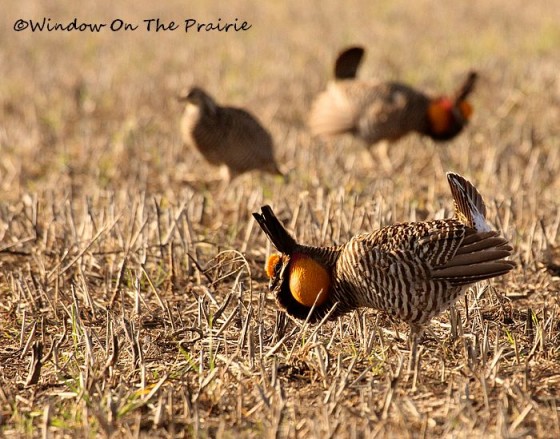 Can you imagine puffing out your neck to attract a mate? Here the neck sac is fully inflated: 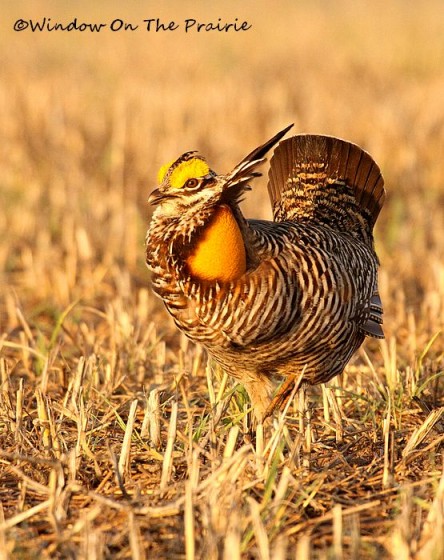 Here it is partially deflated and hangs limply: 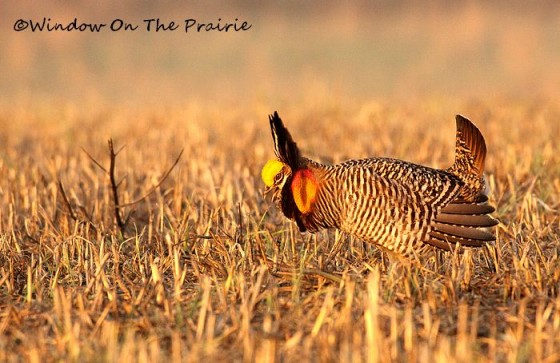 and here it is completely deflated with the neck feathers lowered to cover it. 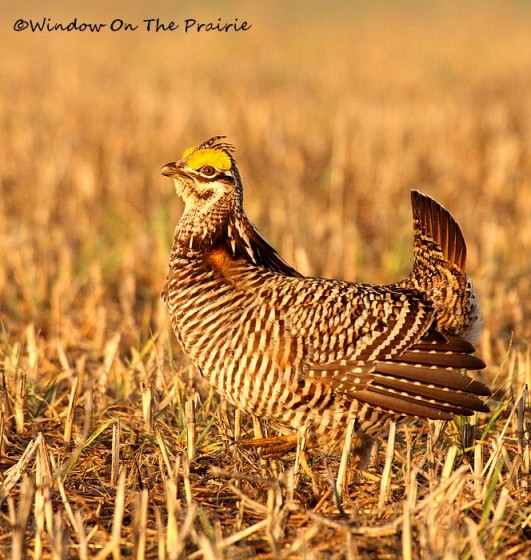 Accompanying all the displays are the calls – a chorus of many birds’ squawking, screaming, screeching, and wa doo whoo whoo whoo‘ing.  At times it can be deafening.

One by one the birds left the lek, and by 10:00AM, only a few remained. We crawled out our blinds, and stretched our cramped muscles. After packing up all our gear, the walk back to the truck didn’t seem so far in the bright sunlight as it had earlier in the darkness.  The prairie chickens would spend the rest of the day feeding and resting up for tomorrow morning.

We headed home, and that afternoon took a much-needed nap.

Up Next:  A video with all the action on the lek including, of course, all the sounds. You don’t want to miss one of the greatest shows the American Prairie offers.