Lately, our days have fallen into a regular routine. Gerald and Ramona work on the siding M – F. Harland is in the field harvesting corn every day. I go to work M – F in town as a customer service rep. There’s the regular cooking, cleaning, shopping going on of course. Kitty and Muffy have their regular schedules of eating, sleeping, grooming, and playing. 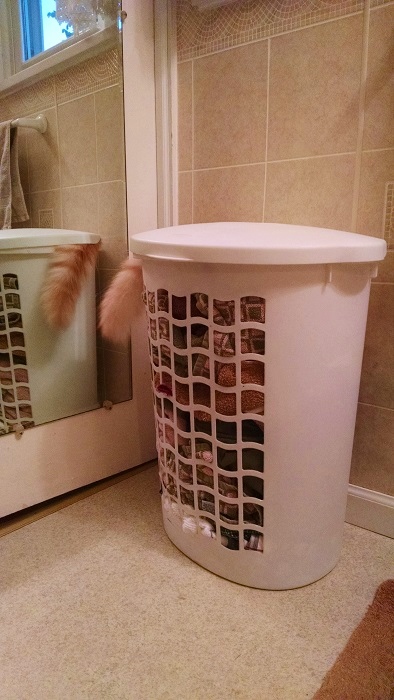 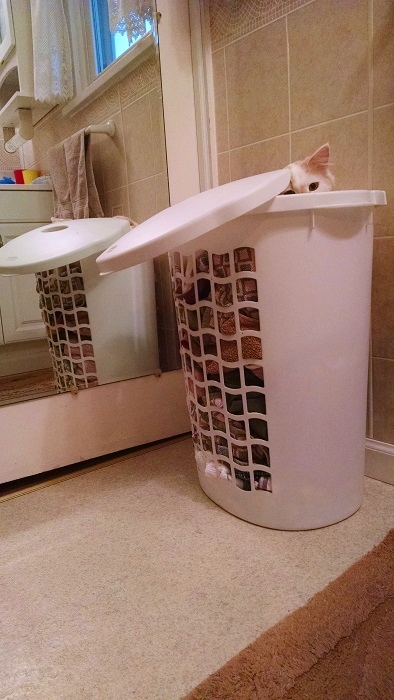 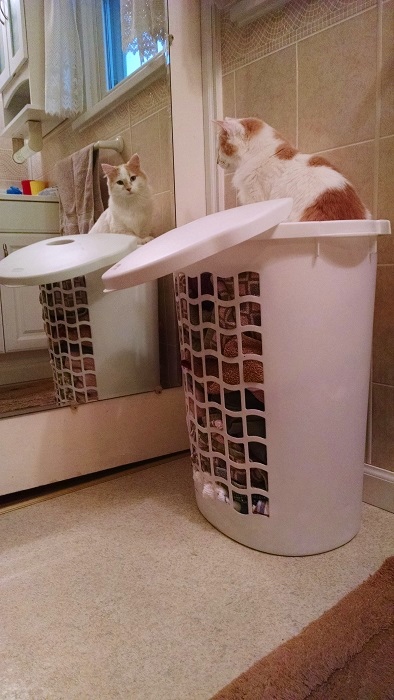 The temperatures have finally dropped from the scorching triple digits down to highs only in the 70s. We’ve had the windows open for the last few days. Last night I lay in bed listening to a pack of coyotes conversing (yip yip howling) out in the darkness.

Just look how cool it was Saturday morning: 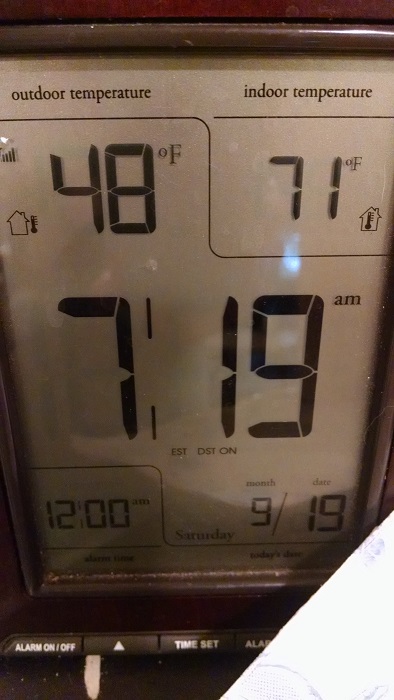 And look how warm it was in the house…we didn’t even turn the heat on, just closed the windows. Of course the ground is still very warm radiating up from the floor and basement. But in the past (pre-insulation and siding) the temp in our house would have been much cooler. I can’t wait to see what our house feels like this winter. Give me your 30mph north winds with a low of 20 below and wind chills of 30 below. I’m gonna laugh in your face, old man winter…

Once a week we go down to the summer pasture to check the cattle and bring them salt/mineral. It’s beautiful there. A wide quiet windy place of grasses, flowers, and prairie birds.

We breathe it all in for a few minutes. 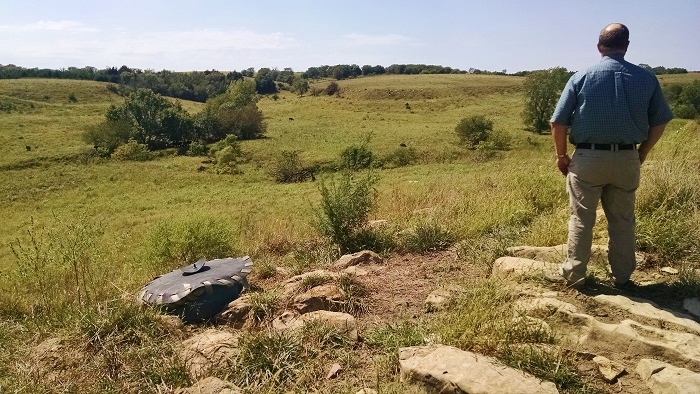 And take the occasional selfie: 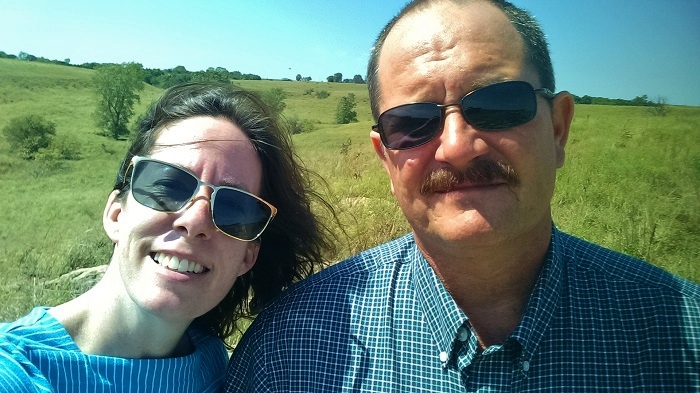 But there’s work to be done at home, so we don’t linger too long. In the next couple months, we’ll be bringing the cattle herd home again.

The only thing left in the garden is the tomatoes and they have slowed somewhat with the cooler weather. We water them a couple times a week, and pick tomatoes every few days. We eat them with supper every night. Over the weekend made tomato sauce for the first time ever. We had about 30 – 40lbs of tomatoes backlogged that were going to go bad if I didn’t do something with them. 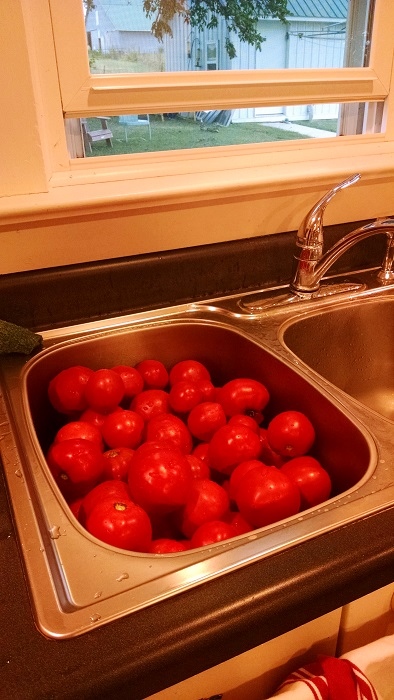 I found a site online that gave simple instructions and got down to work washing, peeling, coring, and slicing.

I had help of course: 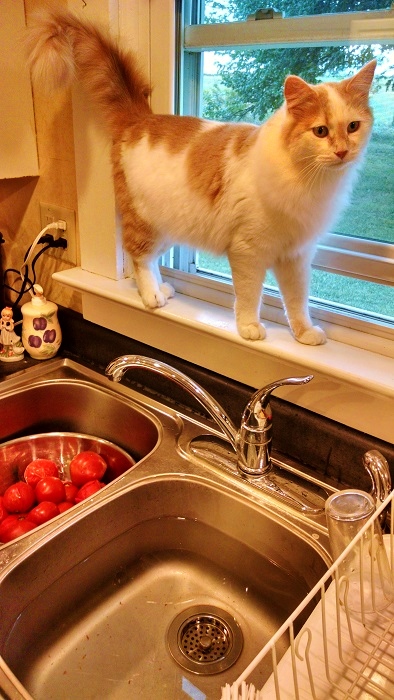 Kitty was goggle-eyed over so much tomato bounty.

“You’re not really going to eat all those yourself, are you?” 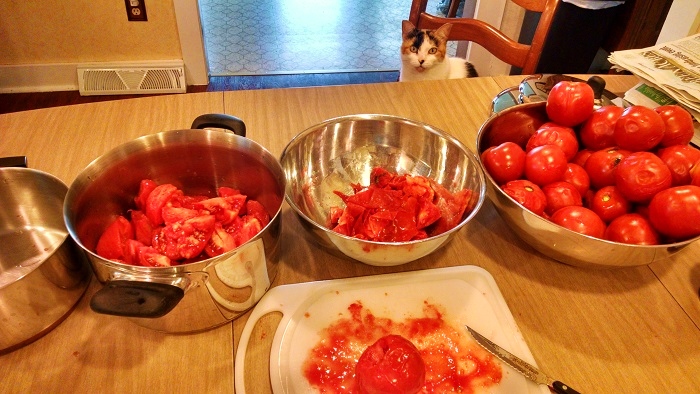 “Seriously, you can’t give me just one?” 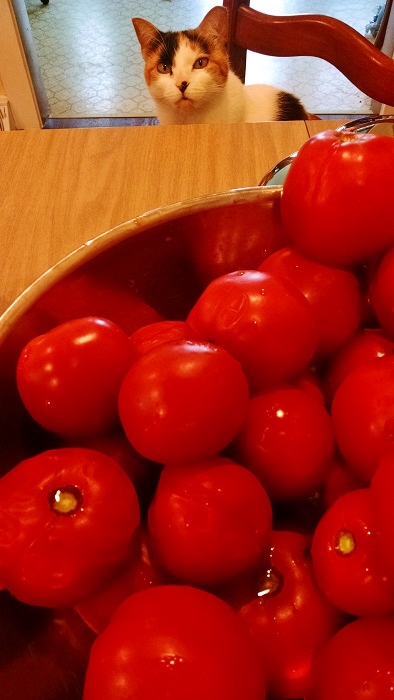 After the tomatoes were boiled down for several hours, cooled, put into the blender, back into the boiling pot, and canned up in jars, I was exhausted, and really tired of tomatoes. We only got six quarts. 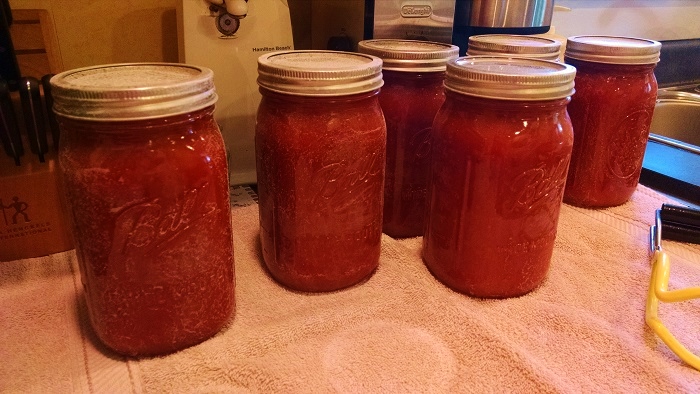 Seems like a lot of work. But it was the first time out for me, next time will go faster I’m sure. And of course, it’s always satisfying to put up your own produce.

This past Saturday, I was up at the farm pottering around in the old farmhouse while Harland worked out in one of the grain bins emptying the corn out. He had harvested it in the last week or so, put it into the bin and run the drier, and was now emptying it back out again to make room for more corn needing to be dried. 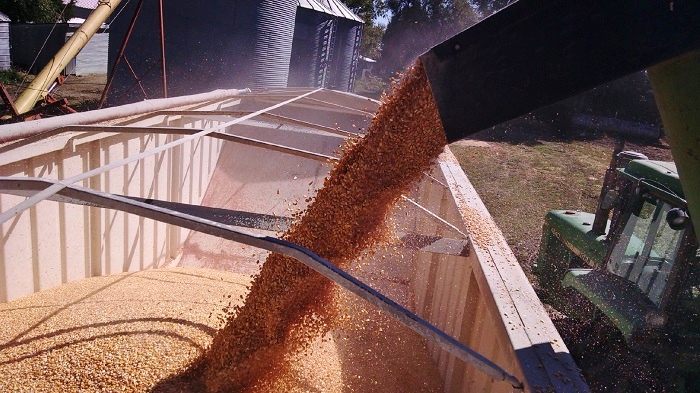 When the corn got low in the bin, he put in a sweep auger into the bin to get the rest out. He lay it on the floor of the bin, turned it on, and then watched as it augered the grain toward the center dump hole (I’m sure that’s not the right terminology, but you’ll have to bear with me). Other augers under and  on the outside of the bin transported the corn into the waiting grain cart. Occasionally, he pushed the auger a foot or two in a circular pattern around the bin to get the corn all out. 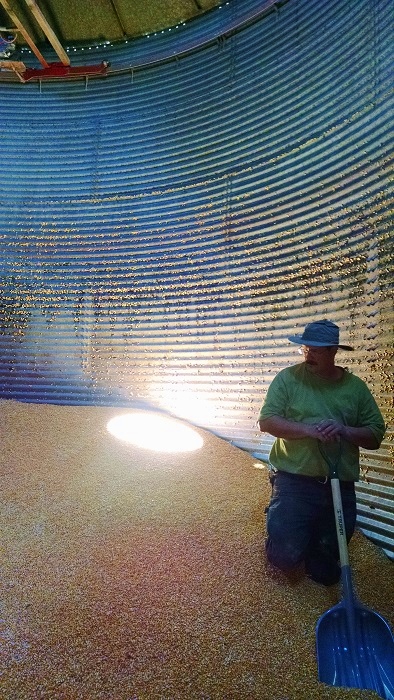 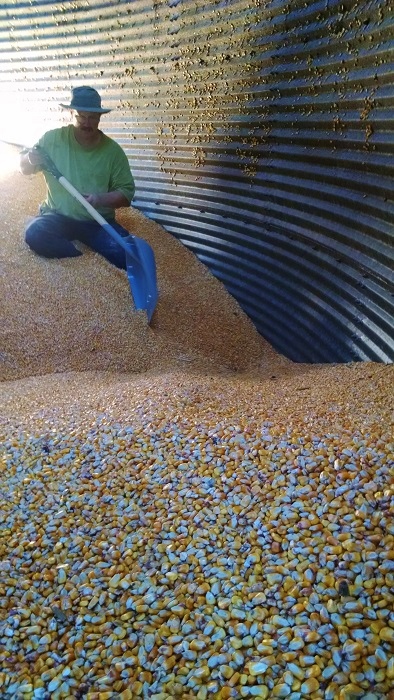 For a while, I helped by keeping an eye on the grain cart to make sure it didn’t overflow. I’ll have a video soon that shows all this, it’s really a pretty neat process to watch.

We recently bought a half of pork and it is being cut up to our specifications this week. It will be ready for pick up this Saturday. I’m excited! We’ve got plenty of beef in our deep freezes, but we’ve never gotten a pork before. I need to do some organizing in our deep freezes before then to make room. We have three of them in the basement with all our beef and garden produce. I’m dreaming of pork roasts, bacon, ribs, pork chops, sausages…mmmmm… I could never be a vegetarian. Sometimes when I’m in the basement, I open one of the freezers just to gaze lovingly at all the steaks and roasts. I’m a shameless carnivore.

We finally got some rain last week, about a half inch. I asked Harland if it would do the soybeans any good and he said it would some. But the heat and drought did its work. We won’t know until we take the combine into the field to harvest the beans, but we aren’t expecting a bumper crop. Beans shut down when there isn’t enough moisture, which affects the number of bean pods that are filled out and the size of the beans themselves. Fewer smaller beans = less profit. Time will tell and we’ll know here in a few weeks. 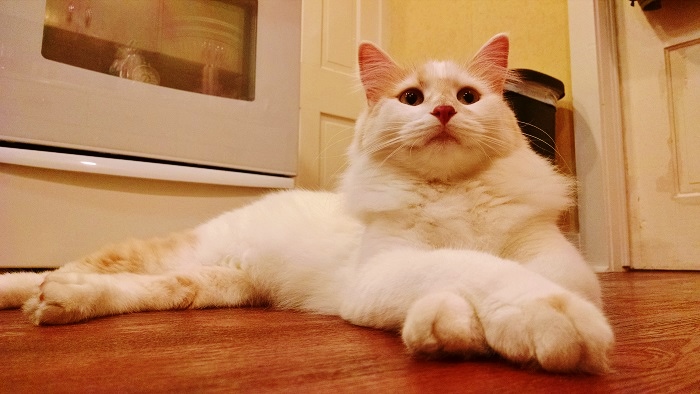 He’s getting so big on us. He’s over 10 pounds now, and his fur just keeps growing and growing, particularly around his neck, like a lion’s mane. He’s a young man now. 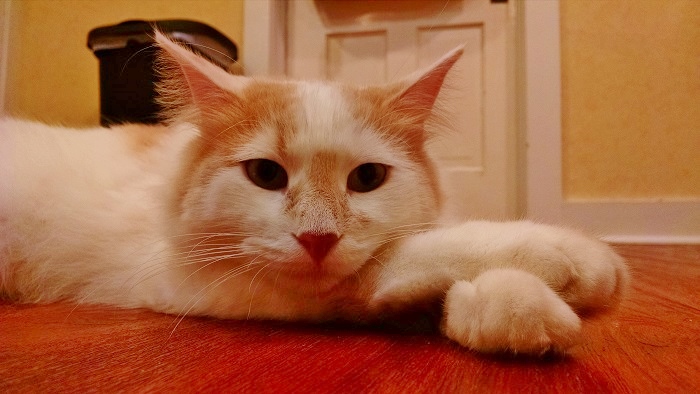 “Oh Muffaloo, in our hearts, you’ll always be that little kitten we rescued from a barn in Missouri. We love how much joy and companionship, both for Kitty and us, you’ve brought into our little world. But everyone has to grow up.”

I’ll be back soon with that grain video I promised you, and another update on the house. Have a great week all!