Several weeks ago(I’m so far behind, yikes!), Harland finished up with the last harvest of the year – the soybeans. 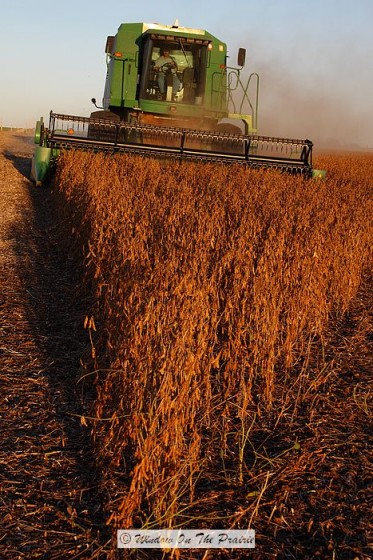 Anywho, one evening I caught up with Harland as he finished work for the day.

And so the harvest is done for another year and the grain trucks and combine are cleaned up and put away. It was a rough year. In July and August, we had 20+ days of temperatures over 100 degrees.We almost lost the corn when it was only a few feet high due to lack of moisture. But a rain came just in time to keep it from dying. The soybeans too were almost lost but they made it too. Our corn and soybean yields were down, but we are grateful that we at least had something to harvest. Some farmers in drier parts of Kansas watched as their crops died in the field.

The drought and heat also dried up the pasture and the cattle grew lean. The calves didn’t gain as well as they normally do. But we were fortunate in that we didn’t have to sell off our cattle. And while we only baled about half the normal amount of hay, we have wheat straw and corn silage to fall back on, and so the cattle will spend the winter on a buffet of silage, straw, and hay.

We’re still behind on moisture for the year so we’re hoping for a long snowy winter, and a better growing season next year.