It’s 30 degrees, misty/rainy, and the wind is blowing out of the north with wind gusts of 30mph.  It’s supposed to snow later.

It’s a good day to curl up on the bed, like Kitty, and doze, only occasionally opening her eyes to peer out the window, 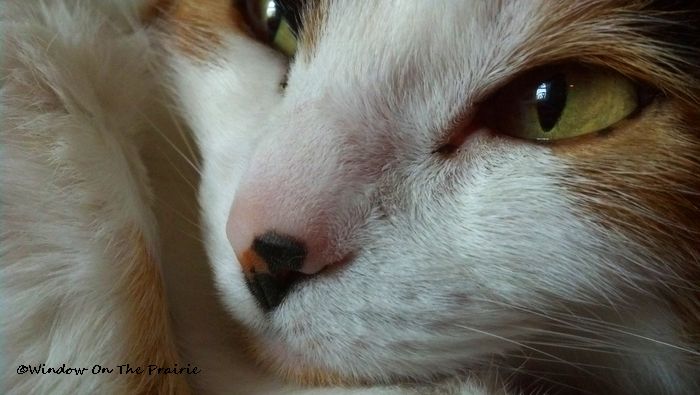 But unlike Kitty, we have work to do. Weather like this makes the pregnant cows think about calving. They just love to have their babies when the weather is miserable. Probably a barometric pressure thing. At any rate we have to keep an extra vigilant watch. We check them more often to make sure if they do calve, they clean their babies and nurse them soon after birth. Any calves rejected or ignored in this weather can spell death in a matter of hours.

We’re hoping the girls wait until tomorrow when the wind will die down and the sun will be shining.

It’s not likely they will all wait, but one can hope anyway.

In the meantime, I think I’ll a cake or a loaf of bread.  Nothing like something baking in the oven to chase away the drearies.

7:30pm:  Well, the girls didn’t wait. We’ve had 2 calves so far today. Harland brought them both up out of the pasture and put them in a small building with their mamas. One of them was chilled and a little premature so it went into the warmer (think doghouse with a heater).  The other was cold but full term and his mama nursed him. He’ll be ok.  And then Harland got back from checking the cows about an hour ago and he said another of the cows was in labor. So he just left a few minutes ago with a dose of colostrum all ready to check on her. It’s 27 degrees and the wind is gusting out of the north 30mph.  Low tonight is 20 degrees F.   Really hoping nobody calves tonight. And hoping the the rest of the cows will hold on until tomorrow which promises to be sunny, still and warmer which will be much better calving weather.