You can see the previous days of our vacation here:

On this day of our vacation, we started out in Oswego, NY that morning, and finished our day in Plattsburg, NY. Our lodging that night had been the Beacon Hotel. When we rolled into town the previous night, there were two chain hotels that we considered until we found the price was about $150, where in other parts of the country these hotel chains usually charged about $90 a night. Everything was like that in New York.  I drink a lot of bottled water and there it was $2 a bottle. Highway robbery!  At home it is 98 cents. Anywho, we decided to look elsewhere for lodging and found the Beacon Hotel.  A former private residence turned hotel, it had lovely little rooms with little private baths. All very clean and only $110. We were sold!

Next morning I got a picture of the front of the hotel, 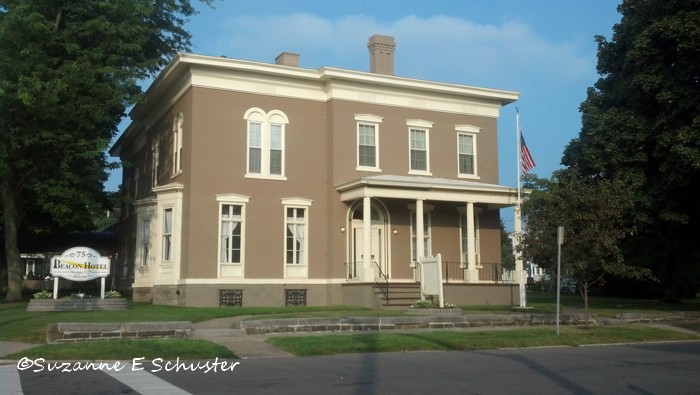 before we hopped in the car and continued on our journey headed east.

By 8:30am, we had reached Selkirk Shores State Park near Pulaski, NY. We stopped to take in the view Lake Ontario and I took the opportunity to dip my toes into the lake. The water was ice cold and it was hard to stay in for more than a few minutes. 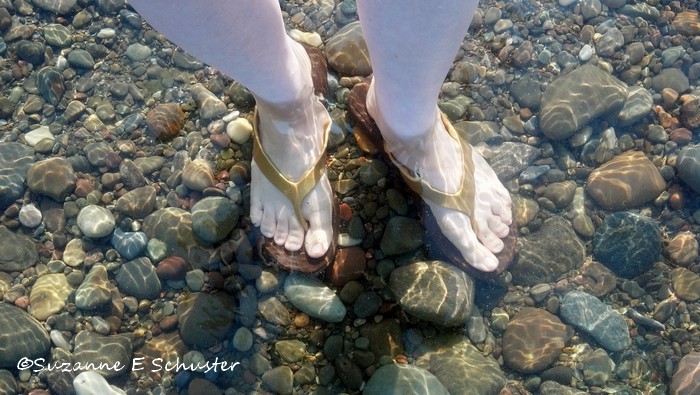 If it’s not warm in late August, I guess it never does get warm. We marveled at how clear the water was though. Beautiful.

Next we took a little walk in the woods. 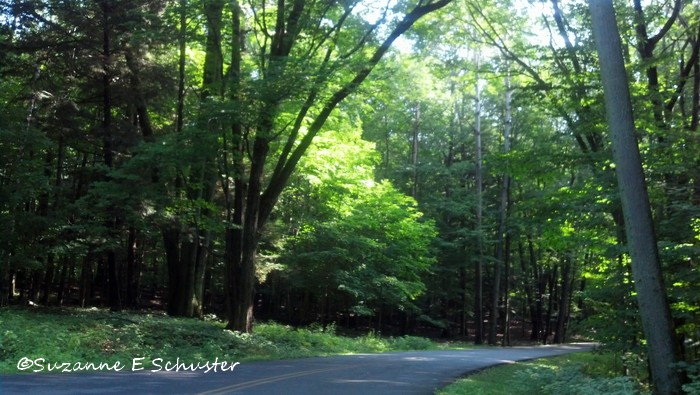 The trees were so much taller than trees in Kansas. The wind is a controlling factor at home where the taller you are the more likely you’ll blow over. Our trees are about half the height of those in the east.

This little bunch of mushrooms caught my eye. 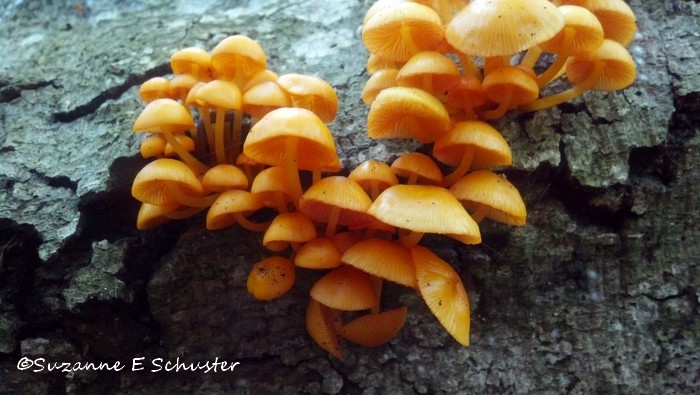 Each of them was no bigger than my thumbnail. So cute!

After walking in the woods for a while, we meandered back to our car and got on the road heading east. Don’t remember where we were for lunch that day, but at 12:30pm we stopped for dessert at a little ice cream shop in the small town of Natural Bridge, NY. 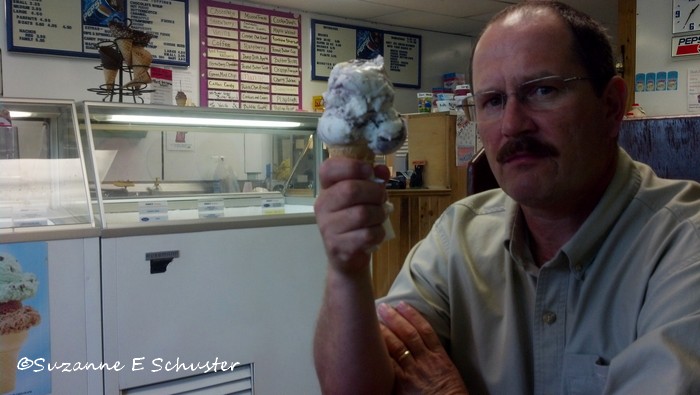 Blueberry yogurt flavor for Harland and Chocolate Moose tracks for me.  Mmmmmm…

By mid-afternoon we reached our next stop, the John Brown Farm State Historic Site. 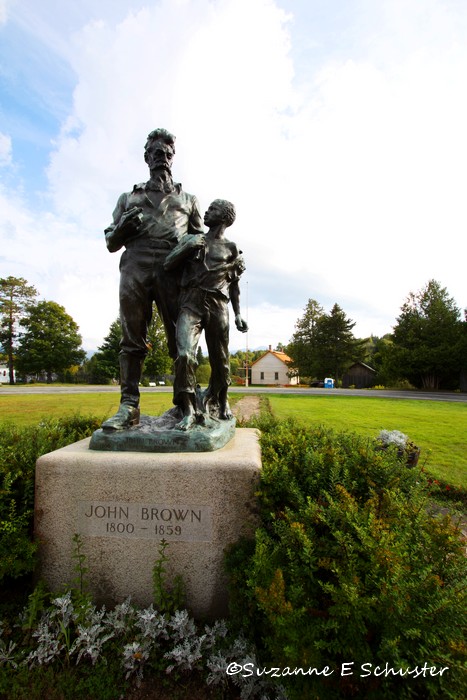 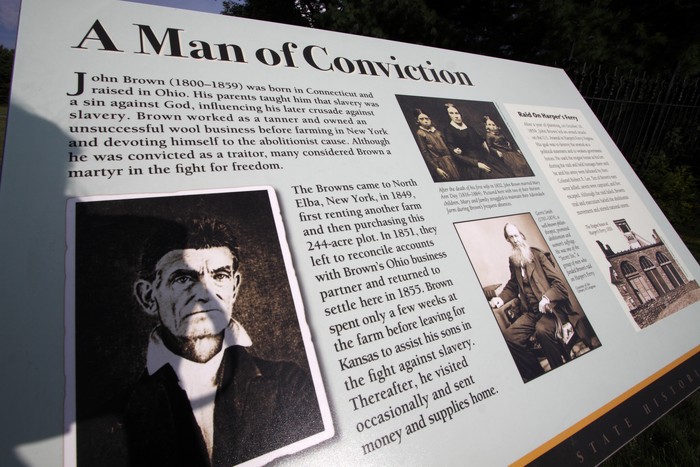 A house and barns were built, but Brown himself spent little time there. 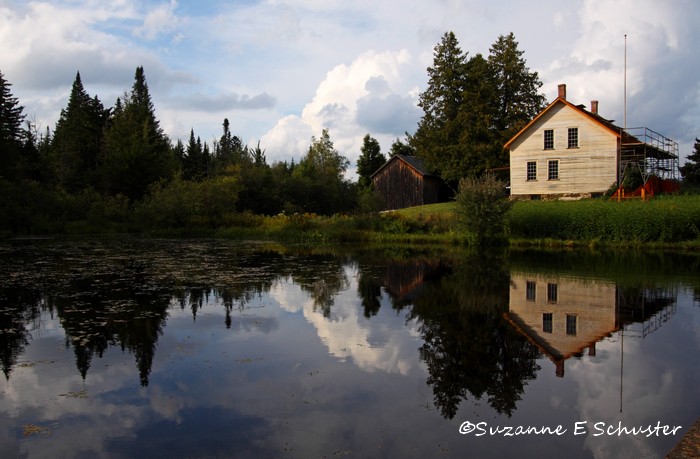 In the mid-1850s, Brown left for Kansas leaving his family at the farm.

Most people have heard of John Brown’s raid on Harper’s Ferry in 1859 that is believed to have been one of the contributing factors of the start of the Civil War. But as a Kansan, we’re more familiar with his activities in Kansas in the years leading up to Harper’s Ferry.

Brown believed that peaceful resistance against slavery was ineffective and the only way to defeat it was through violent insurrection.  In May 1856, Brown and his sons claimed to have heard that their families living in eastern Kansas were in danger from a group of pro-slavery men . On the night of May 24 Brown and his sons took action, dragging five pro-slavery men from their cabins on Pottawatomie Creek and hacking them to death with broadswords. This massacre sparked a three month retaliatory period of raids and battles in Kansas  in which 29 people died.

During our tour of Brown’s farm near North Elba, NY, the tour guide there had a rather different view of the massacre. He said that because Brown felt he was under threat he was justified in being proactive and murdering the five men before they had a chance to harm Brown’s family. But historians agree that the the death of the 5 men that night was in fact murder and the event would go down in history as the Pottawatomie Massacre.

Violence and bloodshed aside, we enjoyed touring the home and seeing how life was lived in the mid-nineteenth century. 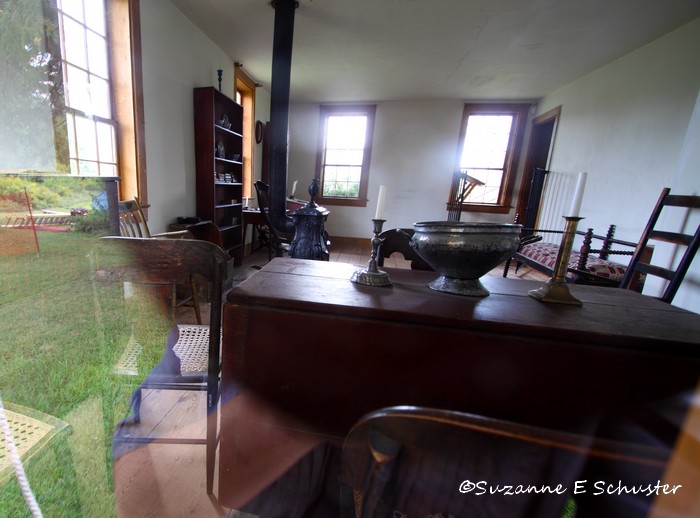 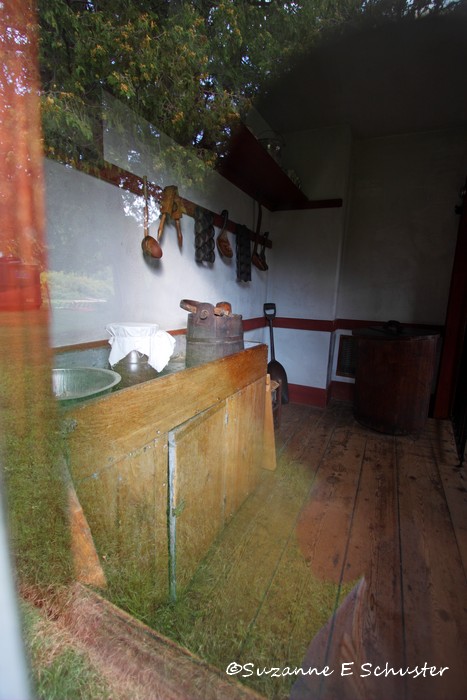 After Brown was sentenced and hanged for treason and murder at Harper’s Ferry, his body was laid to rest near the house. 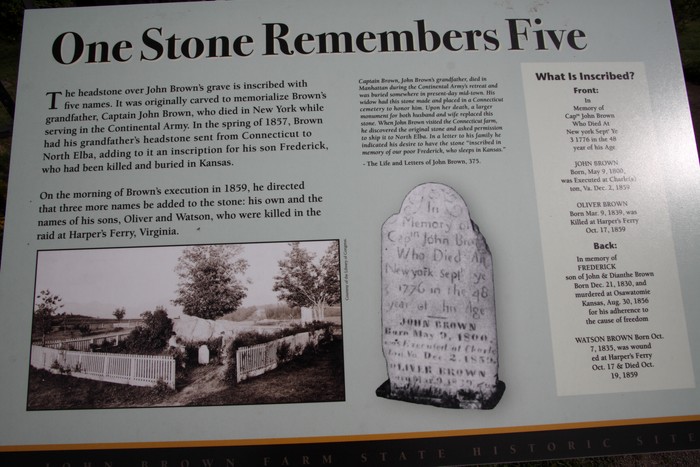 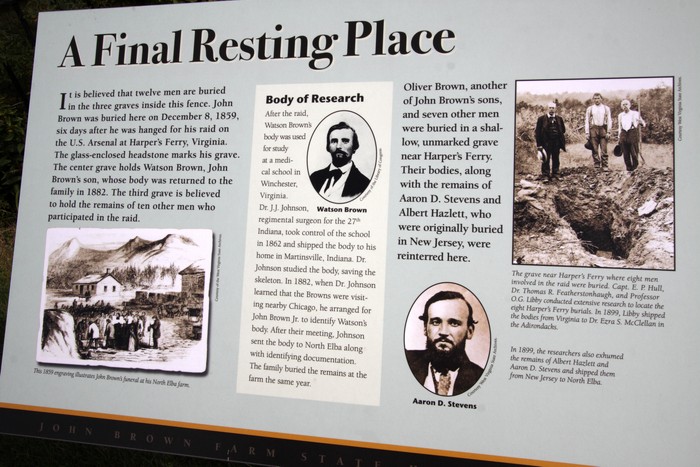 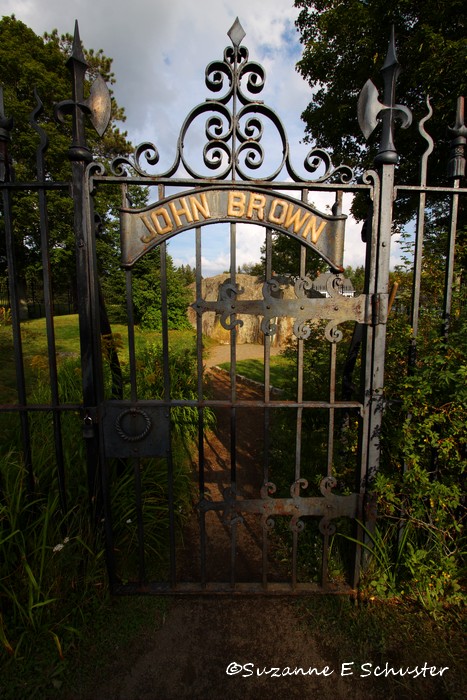 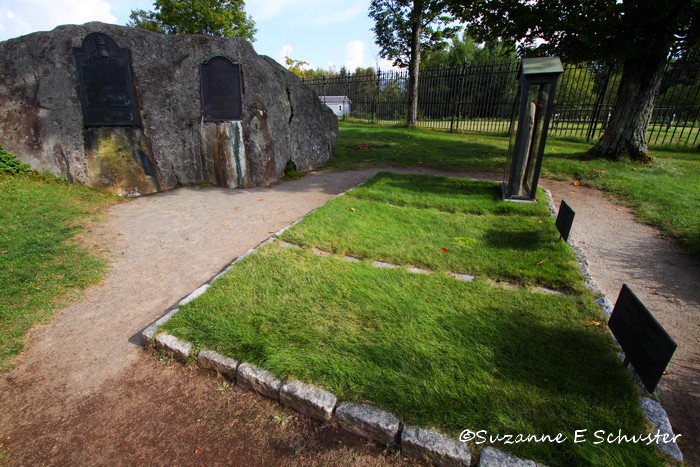 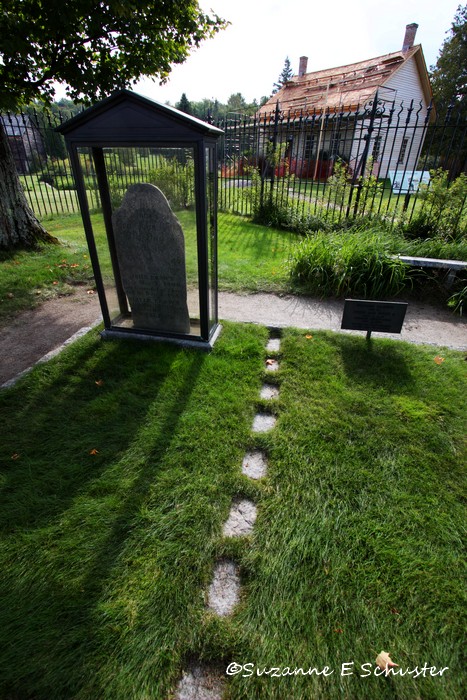 It was late afternoon as we left Brown’s farm and continued on down the road.

We decided to stay the night in Plattsburgh, NY and headed that direction.

On the way we stopped to photograph this fire station in the town of Jay. 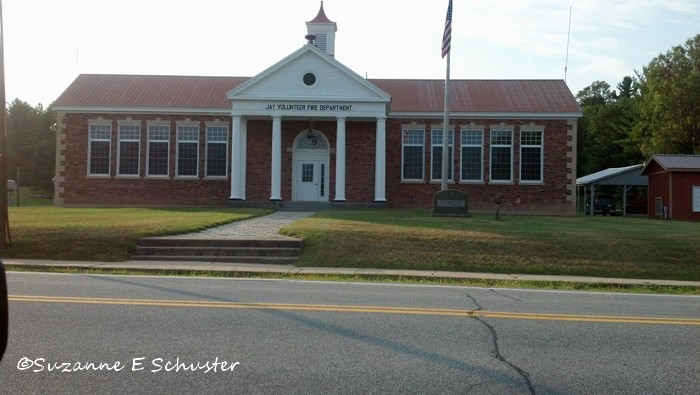 Fire barns to house the fire trucks in the Midwest are simple un-decorated structures with metal siding and roofing. This one and many others like it in the East amazed us. Where do they get the money for brick siding, front porches and cupolas? It’s all we can do in our rural fire departments to make sure the guys have up-to-date fire-fighting gear.

Finally we reached Plattsburgh about 6pm. We checked into a hotel and then sought out a place for supper. We decided on Arnie’s, a family run Italian restaurant that’s been open since 1951. 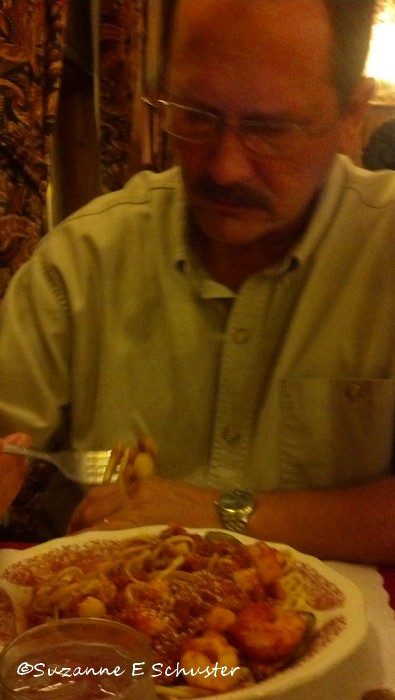 and I enjoyed chicken alfredo. Both were delish!

Afterwards, we headed back to our hotel for the night.

Up Next: We visit a beautiful old church and then cross Lake Champlain on a ferry into Vermont where we see waterfalls, covered bridges, and much more….