If you’d like to catch up, here are the earlier days of our vacation:

Early morning found us driving out of Newport, Vermont where we had stayed the previous night. We were  headed south on Highway 5A when we came upon a lovely little lake in the early morning mist. 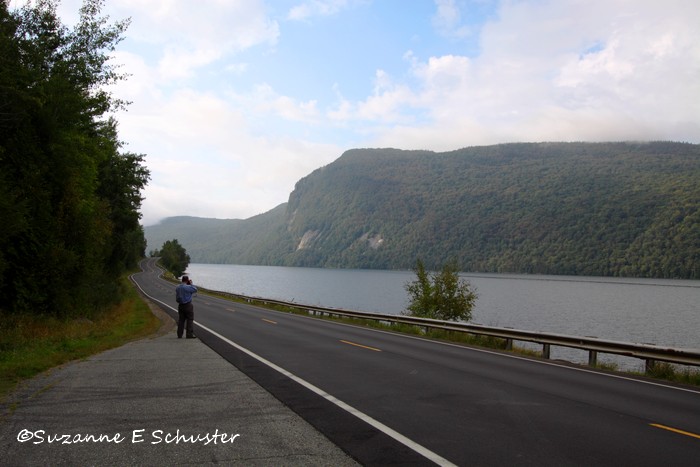 Lake Willoughby is a glacial lake with crystal clear water and a depth of over 300 feet. We stopped and took pics along its eastern shore. We heard a loon calling out across the lake. We LOVE the sound of loons – how magical.

Then we drove to the southern shore and stopped again.

Of course I had to dip my toes in: 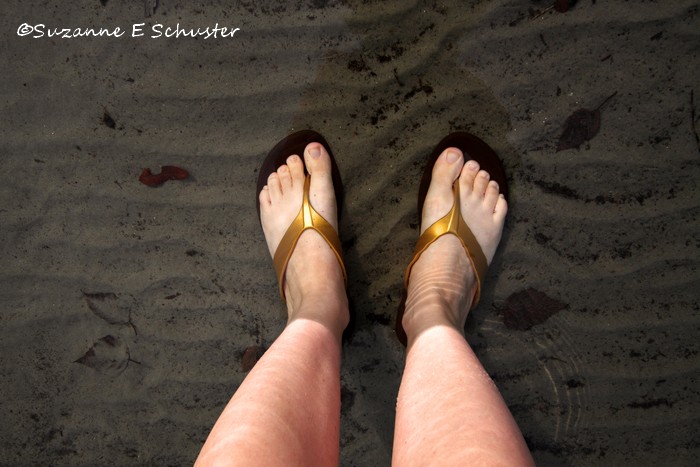 The water was unbelievably clear and teeth-chattering cold.

We watched as a single white sailboat drift lazily back and forth on the opposite shore. 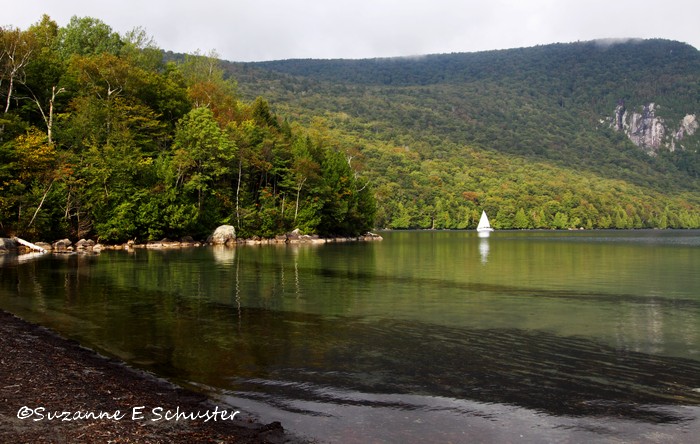 Like other lakes in the area, Lake Willoughby boasts its own sea monster with a less than awe-inspiring name of “Willy”.

A few miles further down the road brought us to the small town of Lyndon. Here we stopped to visit a couple covered bridges. 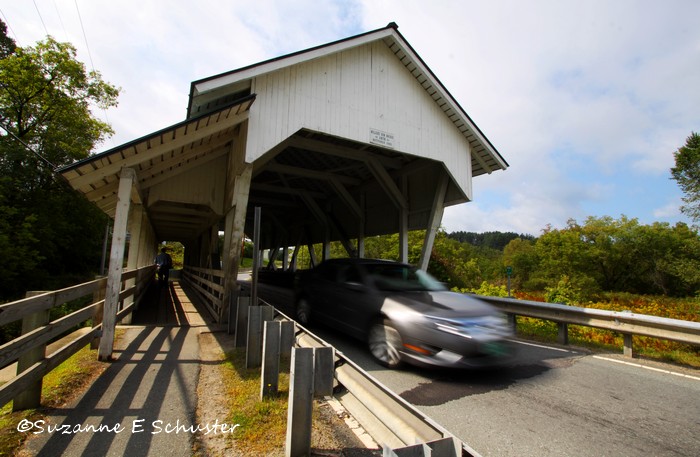 Miller’s Run covered bridge (above) has a covered walkway and was built in 1995 .  An earlier bridge had stood here since 1878, but was destroyed in a storm in 1995 and had to be completely rebuilt.

The next bridge was Chamberlain Mill Bridge built in 1881. (below) 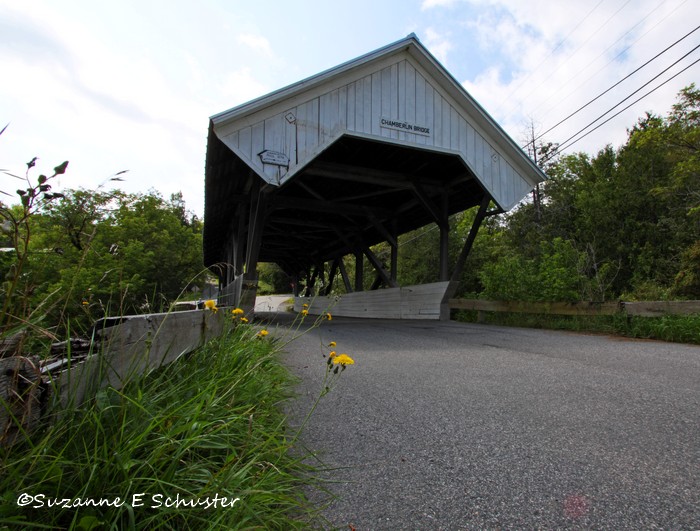 There used to be a mill here as well, but it is long since gone.

I love the sound of my feet walking on the wooden floor of a covered bridge. 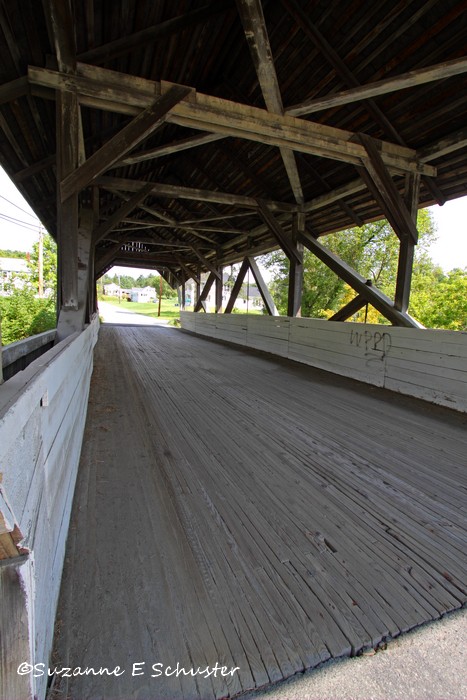 Peering over the edge of the bridge (below) reveals Branch Brook racing along over the rocks. 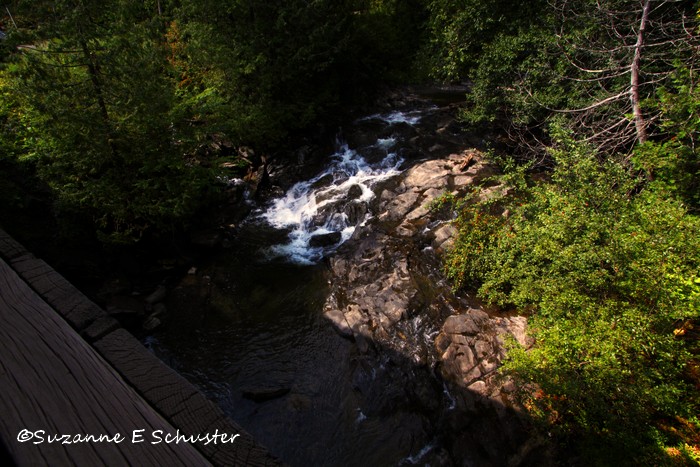 After lingering on the bridge for a while, we drove further east into New Hampshire.

Located in the White Mountain National Forest,  is the 110+ year old resort hotel, the Omni Mount Washington Resort. We just had to stop and take a look. Considered one of the grandest luxury hotels when it was built in 1902, it catered to wealthy guests from Boston, New York, and Philadelphia.  It was built by 250 Italian craftsman over the course of two years and had it’s grand opening in 1902 boasting a staff of 350. Must have been a boon to the local unemployment numbers.

Today, it’s one of the last surviving grand resort hotels in New Hampshire. It has 200 rooms, a 25,000 sq ft spa, and its own private telephone system and post office.

I’ve never stayed here, (yikes! expensive) but I have been here before in the late 1980s on a trip with my Aunt and Uncle. Couldn’t afford it then either, but we stopped to take pics too. 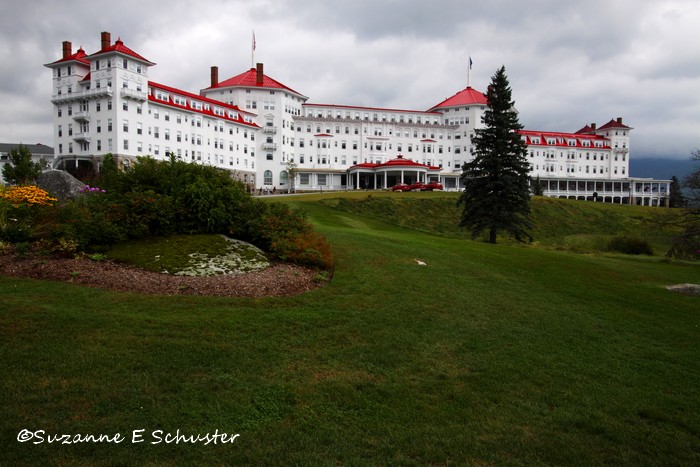 Here’s what it looked like in 1905, only three years after it was built:

Next, we did some mountain climbing, in the car of course.

We drove to the top of the tallest mountain (6,288 feet) in the northeastern United States, Mt. Washington.

It was a long drive to the top because the road is very narrow with a mountain dropping away on one side, and rocks jutting out trying to grab the car on the other side. Harland drove. I cringed, especially when we met another car driving the other way hogging the middle of the road.

It was a little anti-climactic as it turned out because as we reached the top we drove into a thick fog. 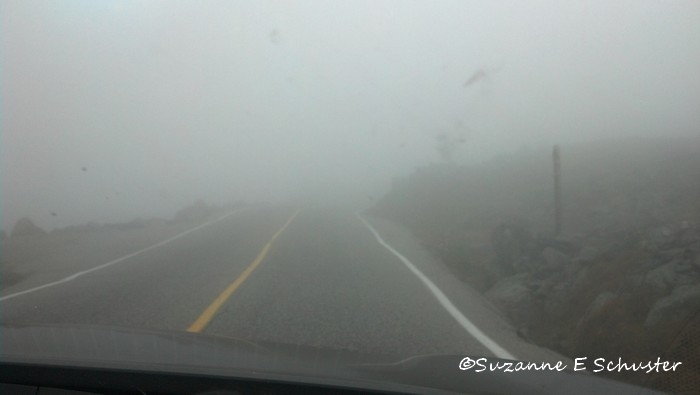 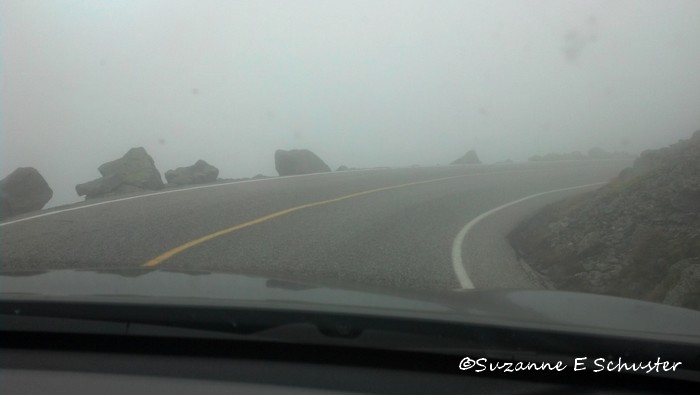 Mt. Washington is known for some really wild weather including a record wind gust of 231 mph.

This fact provided plenty of scope for the imagination for Harland. 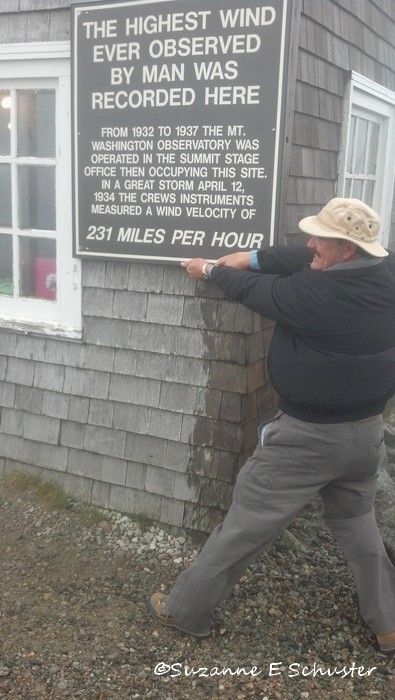 Never seen a building chained to the ground. Is it possible they get even more wind than we do in Kansas? 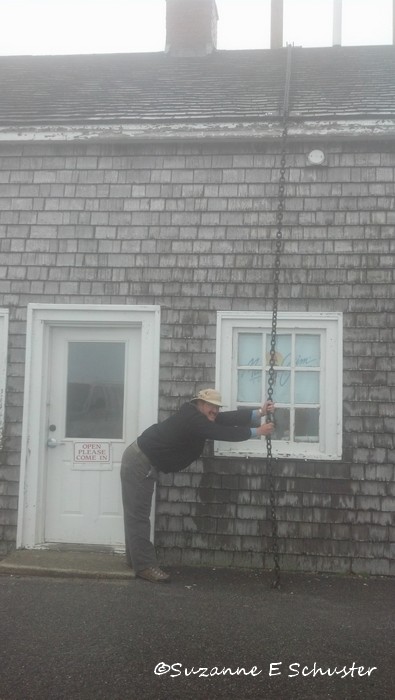 Anyway, after getting the requisite pics of Harland, we started back down the mountain.

Here’s a short video of part of the trip down. We had to stop often to allow our brakes to cool.

Partway down the mountain, were able to see a great view of the rest of the Presidential Range. 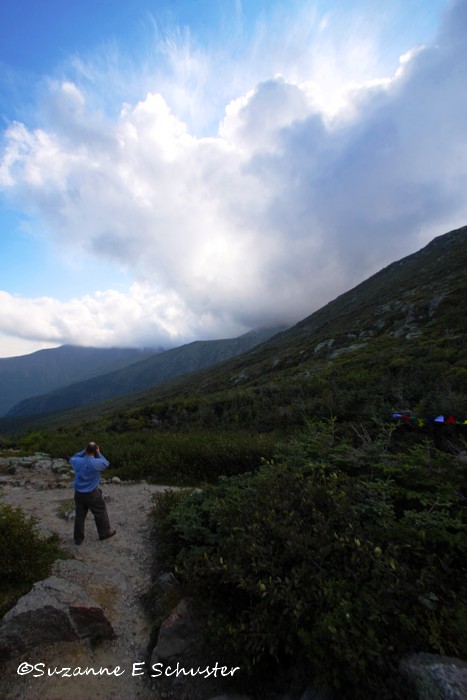 Finally we made it all the way down, and continued along our journey.

Our next and last stop for the day was Rocky Gorge on the Swift River just off Highway 112, also known as the Kancamagus Highway. The waterfall here on the river had a drop of about 12 feet.

A bridge near the falls provides the perfect vantage point to take in the view: 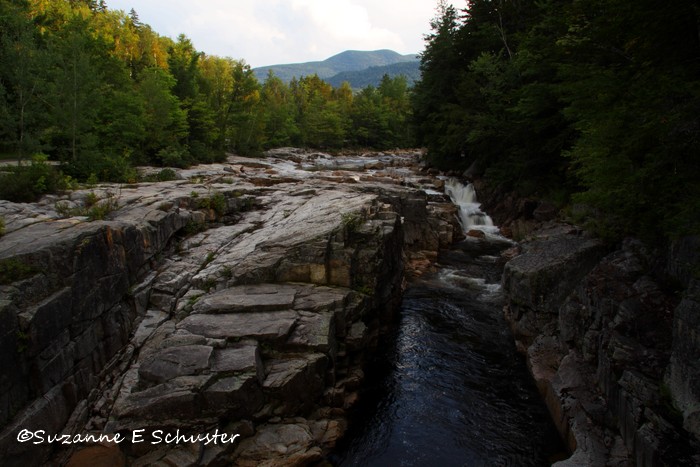 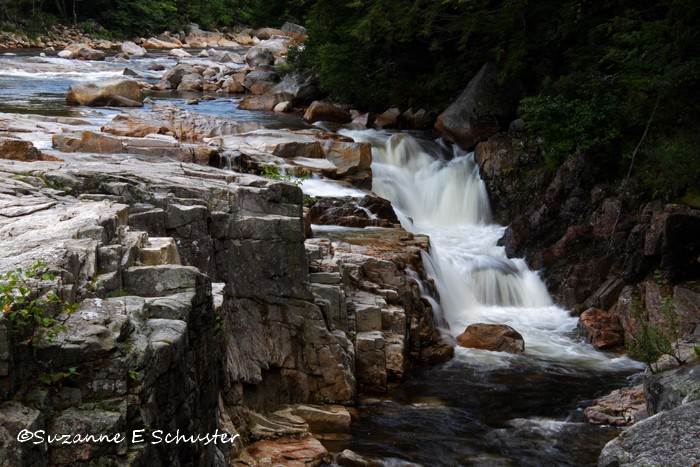 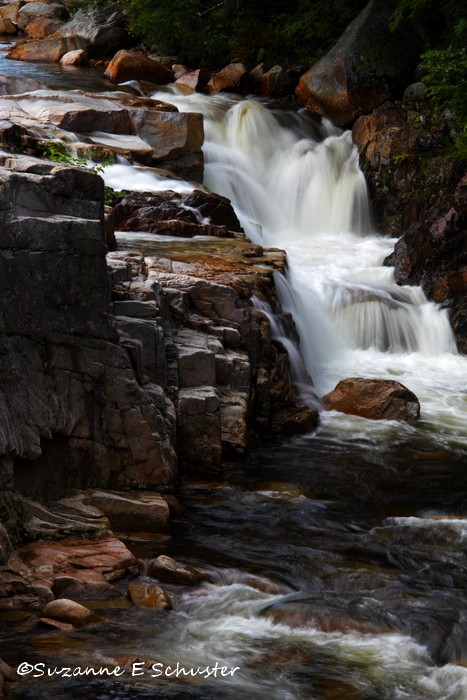 Here’s a video to enjoy:

We stood on the bridge taking pics and video until the sun set and the bugs began to chase us around eager for our Kansas blood.  We packed up our gear, got hastily back to the car, and headed down the road.

We found a hotel nearby where we slept soundly from our day’s journey.

Up Next:  More New Hampshire where we see Covered bridges, Baked goods (whoopie pies!!) for sale by the side of the road, and much more. Later in the day we cross the border into Maine.