Last week, one of our cows had twins, a girl and a boy. Here’s the girl: 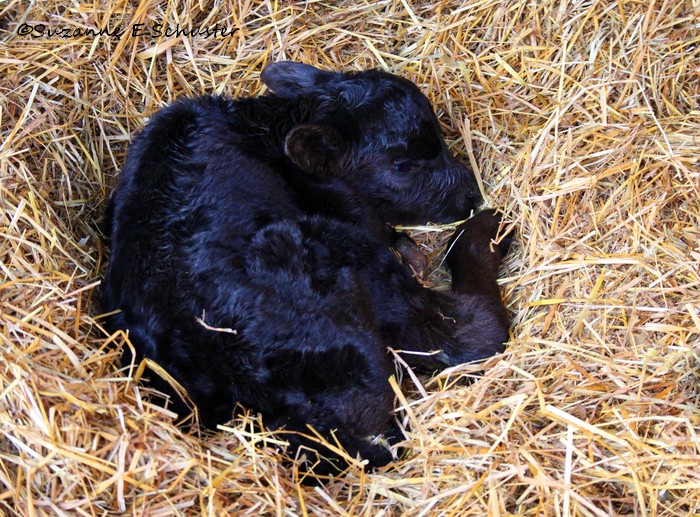 Twins don’t happen very often, and that’s a good thing. Cows aren’t programmed to take care of more than one calf. They’ll take care of one, and ignore the other. But we decided to let her give it a try.

When Harland came upon them shortly after they were born, she had cleaned the afterbirth off both of them and the girl had nursed. But the boy was weak and cold. We figured he had been born first and then instead of the cow cleaning him off, she got distracted giving birth to the girl. In the meantime the boy, covered in afterbirth, got cold.  Harland got them into a little building away from the rest of the herd. He put the boy in a calf warmer (a little calf house with a heater) and gave him some colostrum. The next day the boy was feeling better, but hadn’t nursed.  So Harland fed him. The girl had a full tummy. The cow was doing her best to keep an eye on both of her kids, but as you can see in this video,  it was really stressing her out.

The next day, the girl calf hadn’t eaten, but the boy had. We figured she was only letting one calf nurse each day. While she was aware she had two calves, she was nursing them like she only had one. So Harland gave the girl calf a bottle and brought her to our place where I bottle fed her through the weekend, watched by our little herd of heifers, Eva the cat, and our resident possum. Her mom is doing fine raising just the boy calf.

Then Sunday morning, another of our cows had a calf who died within a few hours. We don’t know exactly what happened, but it seemed to have had a neurological problem. We hate losing calves. So sad.

Hmmmm…we thought….now we had a cow without a calf, and a calf without a mom. So Harland put the cow in a headgate and put a “can’t kick” over her hips (a metal device that puts pressure on the leg nerves so the calf can’t kick),  and then we introduced the calf to her.  Surprisingly, the cow was very interested in the calf and even licked her.  But the calf was afraid of the cow and a poor sucker. She would latch on, suck half heartedly, and then let go. We worked at it for a half hour or so and gave up. We milked out the cow, poor thing’s udder was huge,  and fed the calf with a bottle.  We removed the “can’t kick” from the cow, released her out of the head gate and put her in a pen with the calf in an adjoining pen so they can get to know each other.

Harland is going to try to get the calf to nurse again this morning. We’re hoping these two will pair up. Otherwise, the cow will have to be sold.

Will give an update later today. Stay tuned….

**UPDATE**   Heard from Harland a bit ago. He said the calf did a better job nursing this morning  – still not putting her all into it, but better. Harland had a harder time getting the cow into the headgate – no surprise there, she remembers yesterday’s experience. But he gave her grain and she was happy with that. After wearing the “can’t kick” for a while, Harland took it off to see what would happen, and she didn’t kick the calf as it nursed. YAY!  She also licked the calf.  Cows NEVER lick any calf except their own.    After nursing, Harland put them in separate adjoining pens again, so they can see and sniff each other.  We want to play it safe until we’re absolutely sure that the cow isn’t going to hurt the calf.

So we’ll give it another go when I get off work.  We’re making progress!