Almost 30 years ago, Harland and his dad built a cattle working facility at the farm. It was homemade of cattle panels, wire fence, gates, and even an old propane tank. It was used whenever cattle needed to be worked:  for sorting calves from their moms for weaning, treating sick cattle, annual vaccinations, and loading cattle onto trucks for hauling. 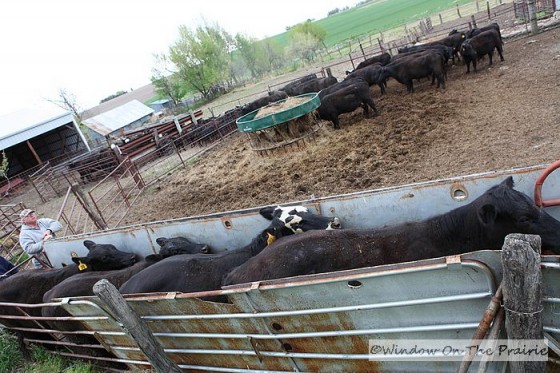 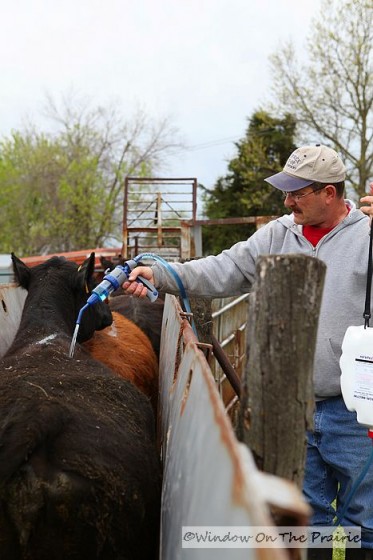 But the design of the facility never quite worked right. It was dangerous for the cattle and for the humans too. It was a struggle to get the cattle to enter the alley for shots, and it was not unusual for cows to jump out and escape into adjoining pens. The alley was too large to confine the calves adequately for shots, so when we did annual calf vaccinations, we crowded them into a pen,which never worked well, and was basically a rodeo with us getting kicked and the calves trying to climb the panels to escape. 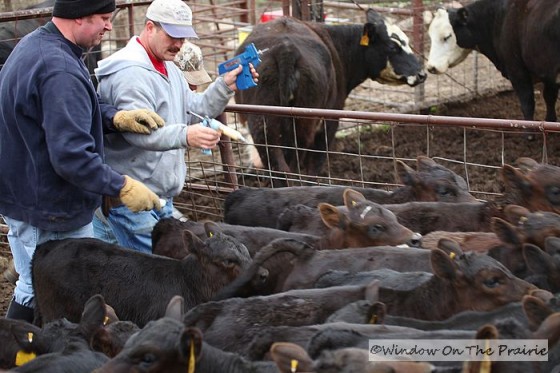 Over the years, the condition of the alley and pens deteriorated and repairs were made, but there finally came a time when it needed a complete overhaul.  We needed a facility that worked and was safer for the cattle and us.

So a few years ago, we began to discuss installation of an entirely new working facility. We would rip out the existing alley and pens, and install a fabricated alley with adjustable sides to accommodate both cows and calves. The pens would be made of pipe welded together, their posts set in concrete. And we would buy a fabricated tub where a handler can move a group of cattle into the alley –  the best feature of a tub is that it is worked by the handler while he is outside the tub, out of harms way of flying hooves.

Here is a tub in action: 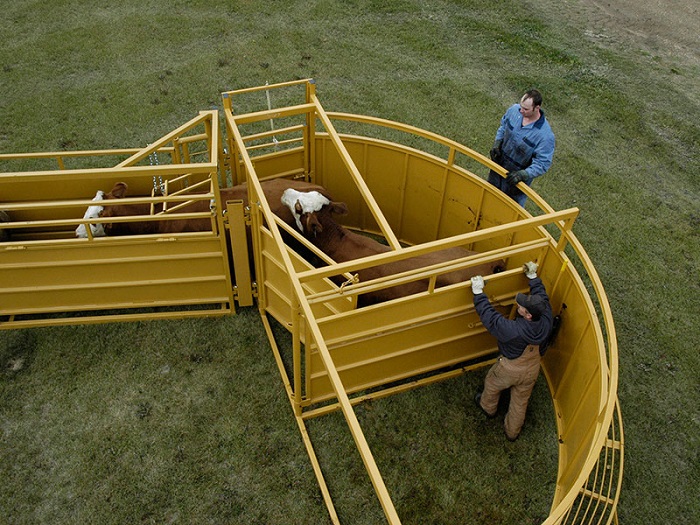 As you can see, the handler swings a gate in behind a cow leaving her no choice but to go into the alley with her companions, while the handler remains safe and sound away from her.

Last year, we bought the tub and alley, and some of the pipe, but we didn’t have time to do any of the installation.

This year we were determined to get the job done. The house remodel kept us busy all summer, but finally a couple weeks ago, when Harland finished the corn harvest and the beans were too wet to harvest, he dug into the cattle working facility project.

First, he ripped out all the old pens and alley right down to the bare earth. Last weekend, we set up the tub and new alley where we thought it will work best. The alley assembled into sections and was easy to put together. But the directions for the tub assembly were nearly impossible to decipher – Harland and I puzzled over them, then Gerald, and finally Harland’s nephew(an engineer!) looked at the plans too. We were all equally confused. We had to assemble and disassemble the tub THREE TIMES before we got it right, wasting precious time and causing frayed nerves. But we finally got it done.

Our plan is to pour a concrete pad beneath the alley and tub, so this this was just a dry run to see where the pad needed to be poured. 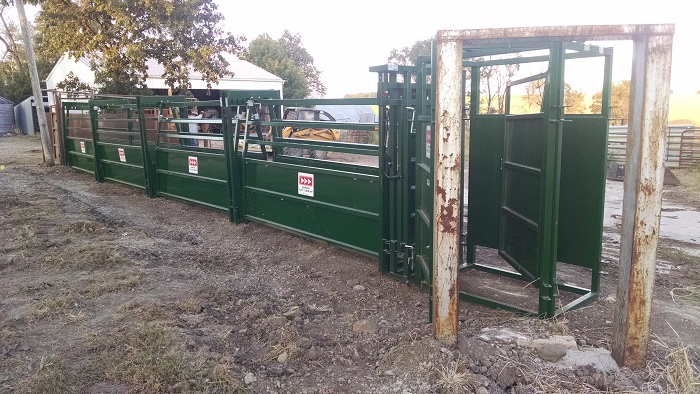 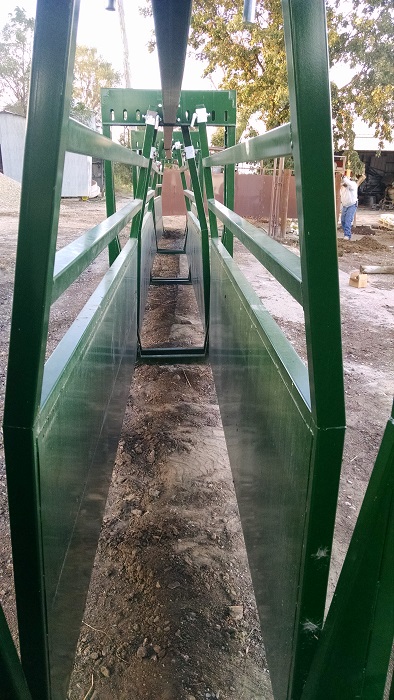 The alley has adjustable sides that can be moved in and out to fit either fat cows or skinny little calves.

Below, you can see where the alley and tub meet: 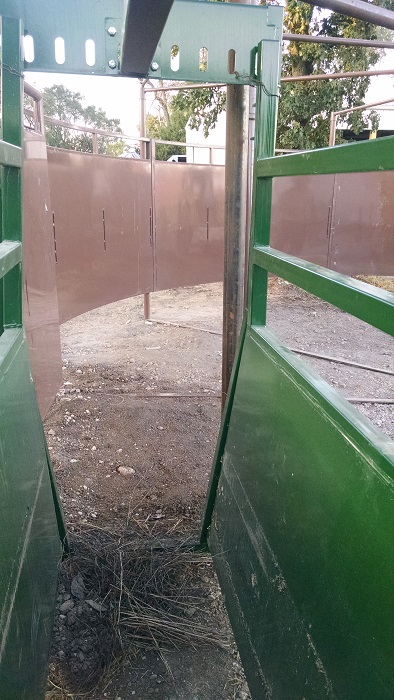 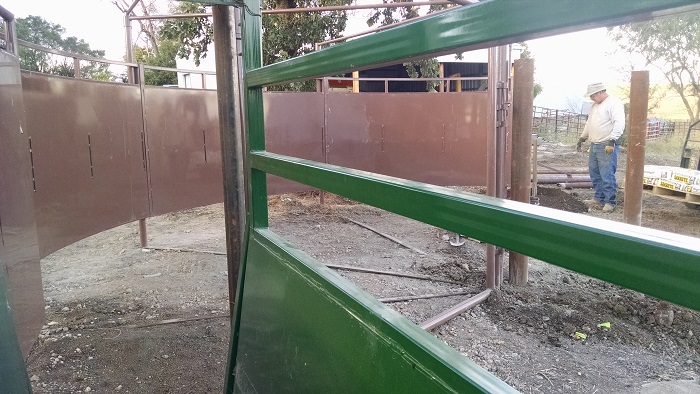 Once the tub and alley was all in place, Harland dug some holes with the skid steer loader and auger attachment, and set some steel posts in concrete for the tub. 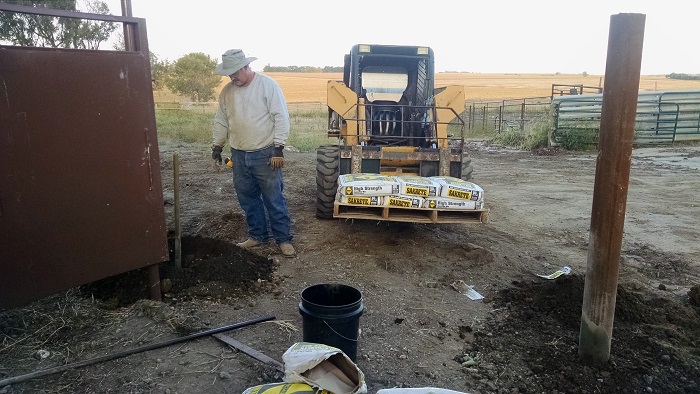 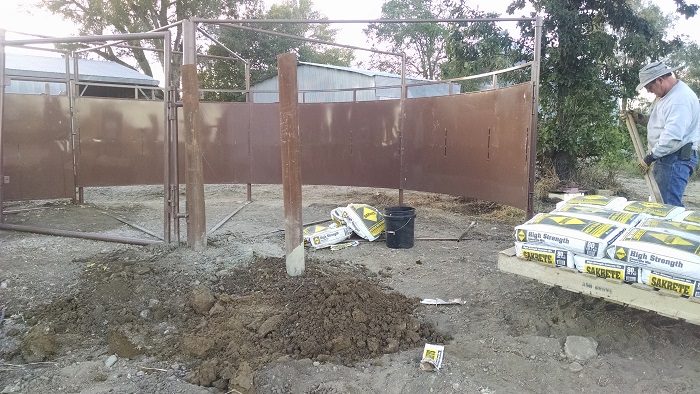 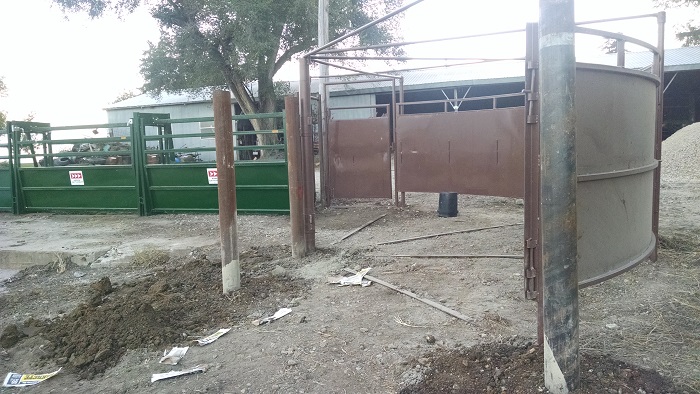 Once that was done, he disassembled the tub and alley and set them off to the side out of the way. 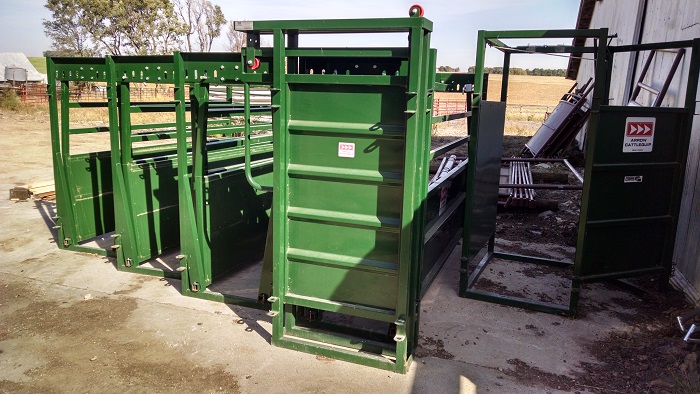 Then last Thursday, Gerald and Ramona, having just finished the house siding project (pics to come soon!), began work on building forms for the concrete pad. 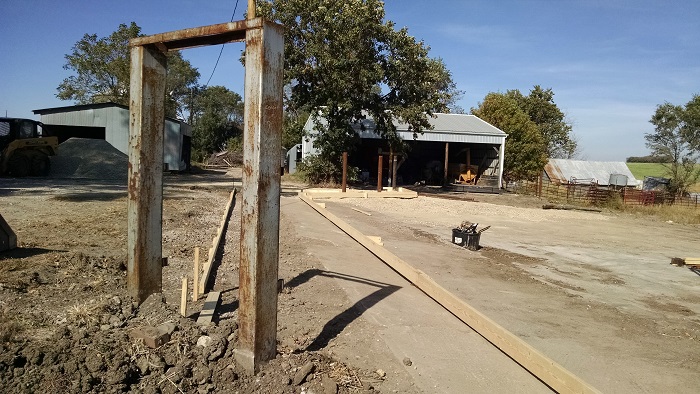 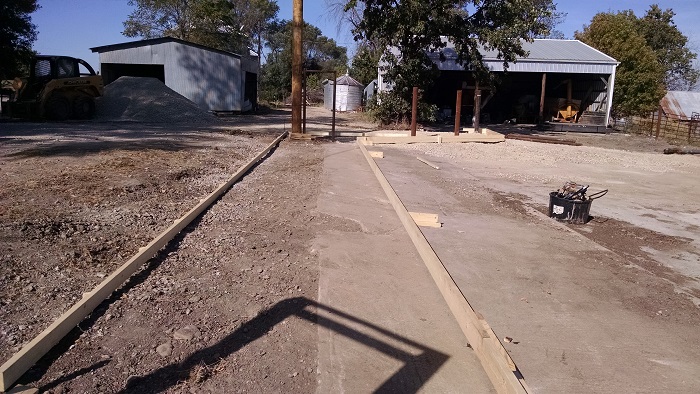 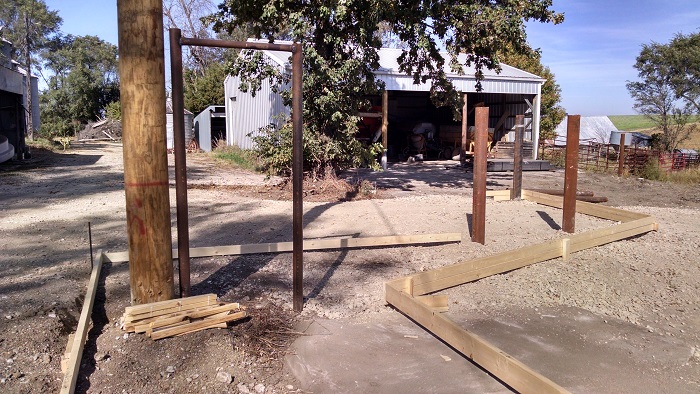 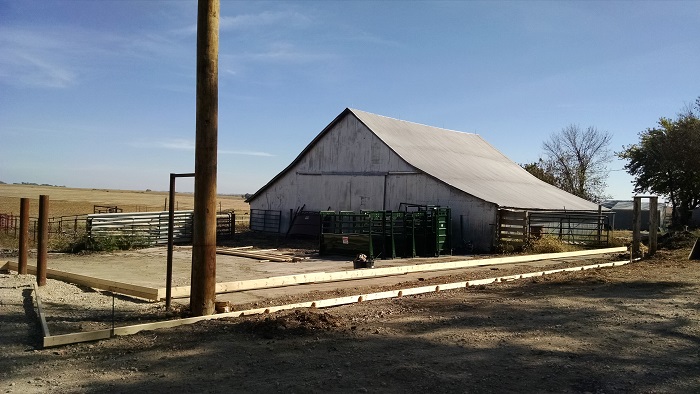 In the last 2 pics above, you can see a new electric pole. Last week, Harland replaced a rotted electric pole that stood adjacent to where the tub will sit.

Once the forms are complete, rebar and wire mesh will be installed within the forms and then the concrete will be poured. It will be allowed to cure before the alley and tub are set up again on the pad. In the meantime, Harland will be digging holes for the pen posts, and building the sorting pens. He’s also working on the soybean harvest. We’re on a time crunch because the cattle are coming home from the summer pasture in just a few weeks.