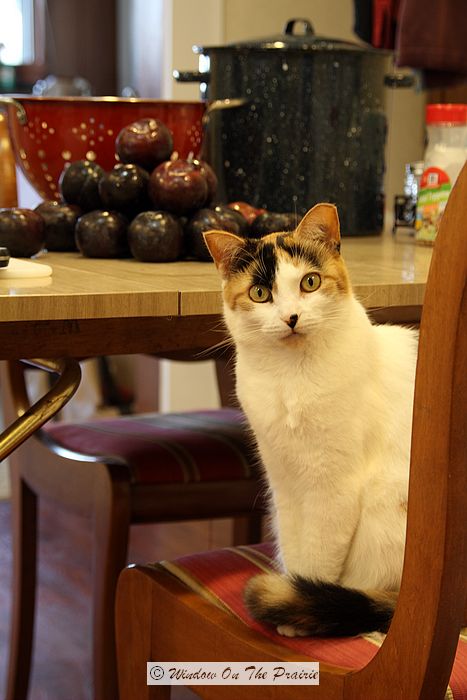 What are we doing today?

Whoa, whoa, whoa….hold on there. The last time we tried that it didn’t come out. Remember the attempt at Wild Plum Jelly?

Yes, I know Kitty. But this time we have a good recipe, and good advice from our fellow bloggers, and some beautiful ripe plums from the store. 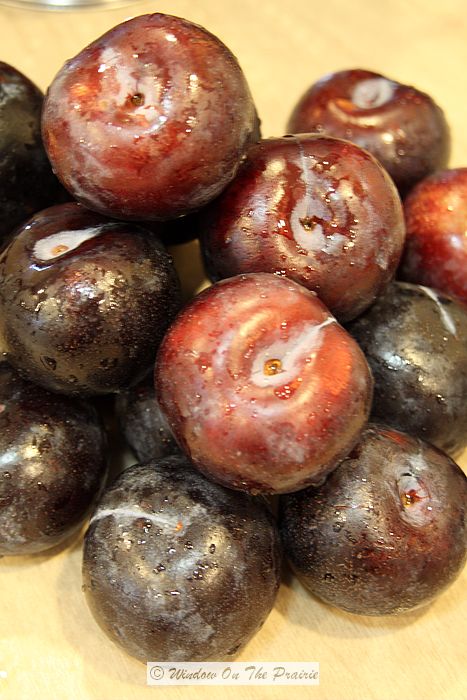 First, cut the plums into chunks. 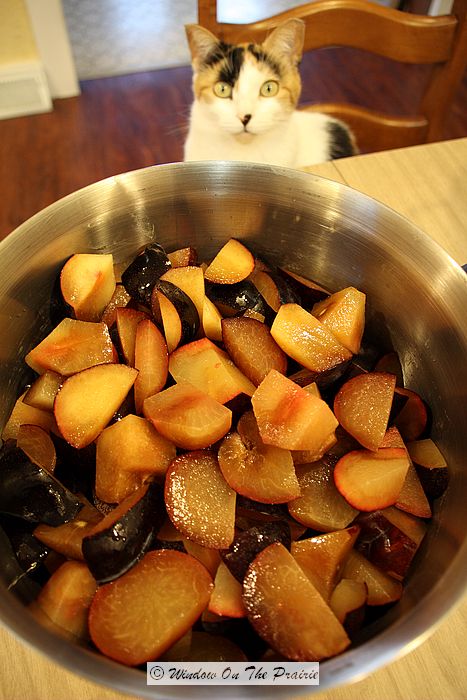 Measure the cup up plums, and then put in a large pot. Then add 1 cup of water per quart of plums. I had 3 quarts plums, so I added 3 cups water. 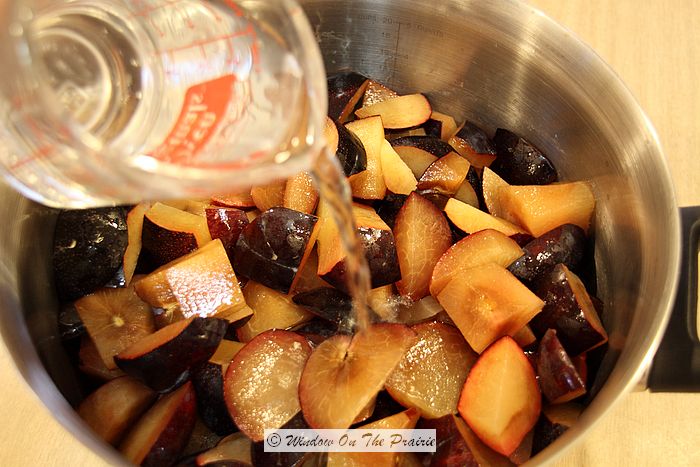 Put a lid on the pot, and bring to a boil. Simmer for about 15 – 20 minutes until fruit is soft and mushy, stirring occasionally. Keep the lid on between stirrings. 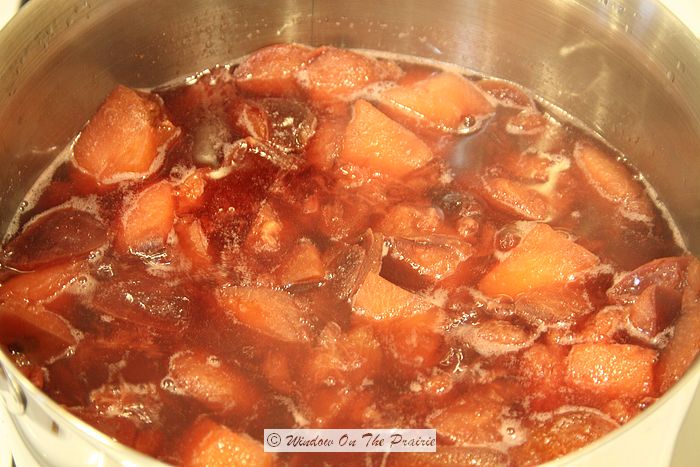 Next step is to strain the juice from the plums using several layers of cheesecloth. I draped mine over a colander, and then set the colander over a pot to collect the juice. The cooked plums and juice are poured into the cheesecloth, and allowed to drain until it stops dripping. 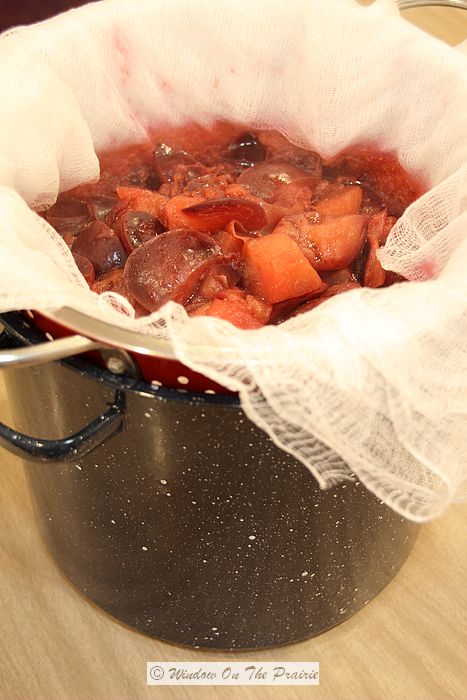 I got about 5 1/4 cups plum juice. Pour the juice back into the same pot you cooked the plums in. (rinse pot first)

Put your jars, rings, and lids in a separate large pot, cover with water, and then bring to a boil. Boil for about 10 minutes. This will kill the bacteria. 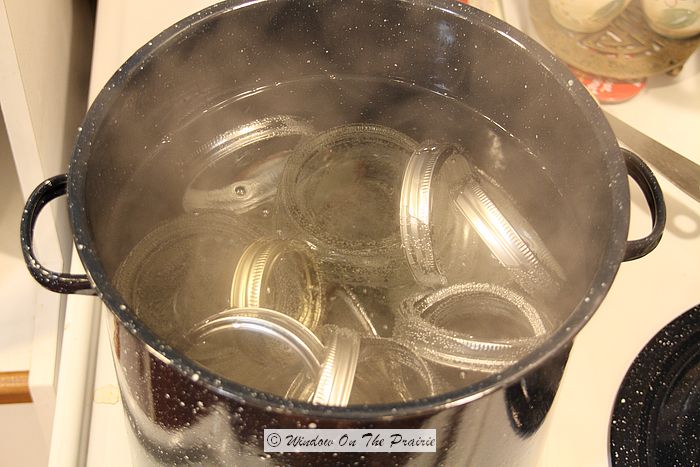 Once boiled, remove pot from heat, and set aside. Don’t drain the water as all the jars, lids and rings need be hot when the jelly is poured into them.

Now, back to the plum juice. Stir the package of pectin into the juice and mix well. Measure out your 7 cups of sugar and set aside. 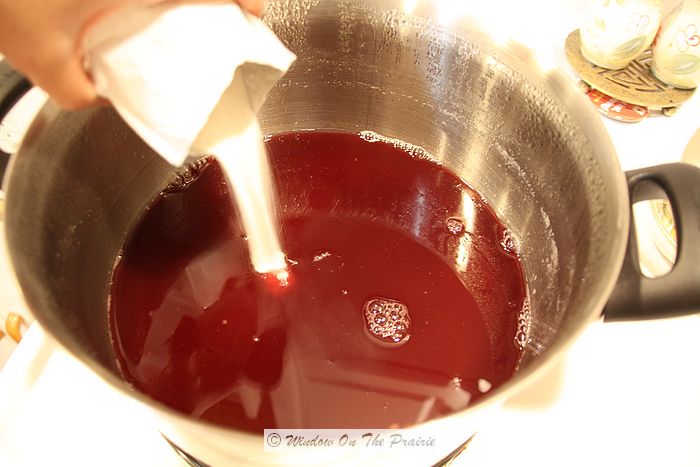 Bring the juice to a boil over high heat.  Stir in the sugar, and mix well. 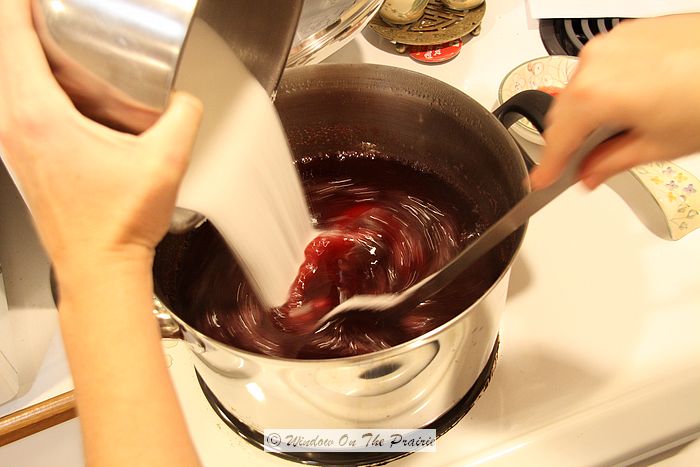 Bring back to a rolling boil, and then boil for 1 minute stirring constantly. Adjust heat if it tries to boil over. 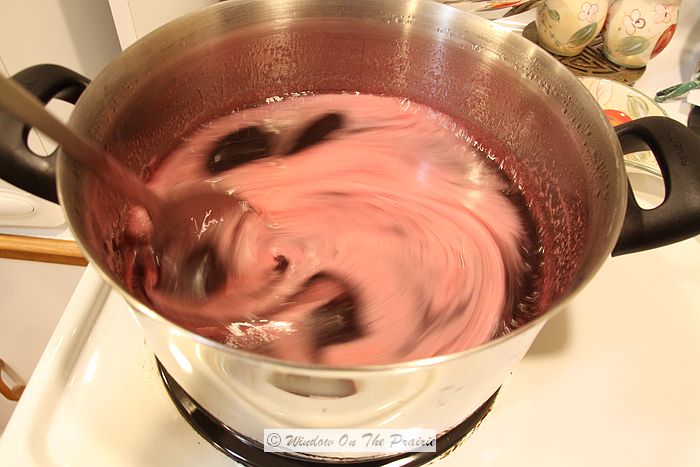 Remove from heat, skim off the foam with a spoon, and put a lid on the pot. Remove the jars from the water pot using a canning jar lifter, and place on a clean towel. Keep hot water in pot. Fill jelly jars to within a quarter inch from the rim. 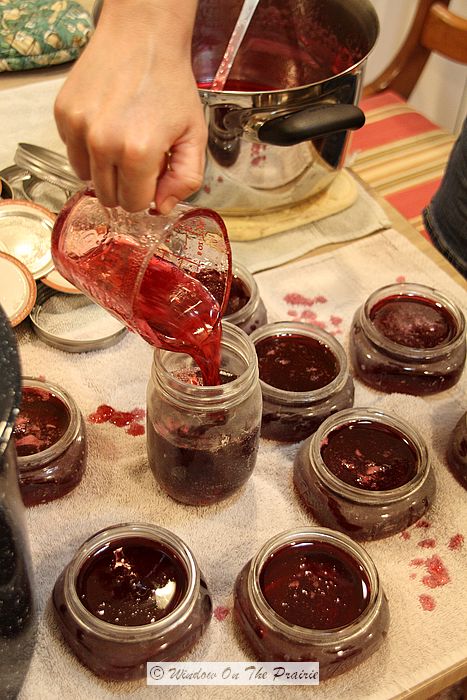 Wipe the rims of the jars clean with a damp washcloth or paper towel. This will ensure a good lid seal. 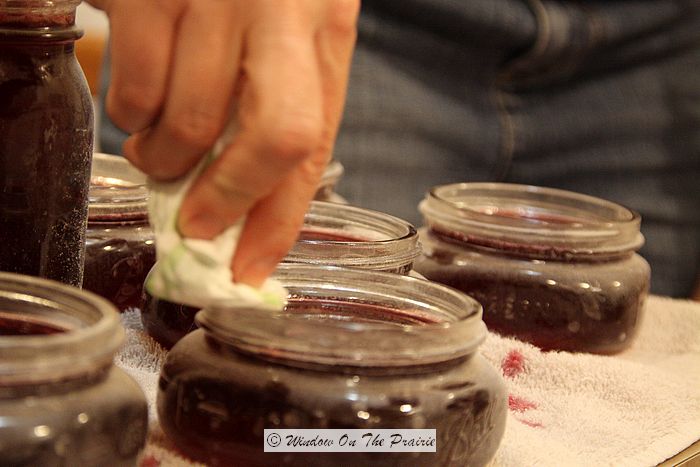 Remove the lids from the hot water, and place on the jars. 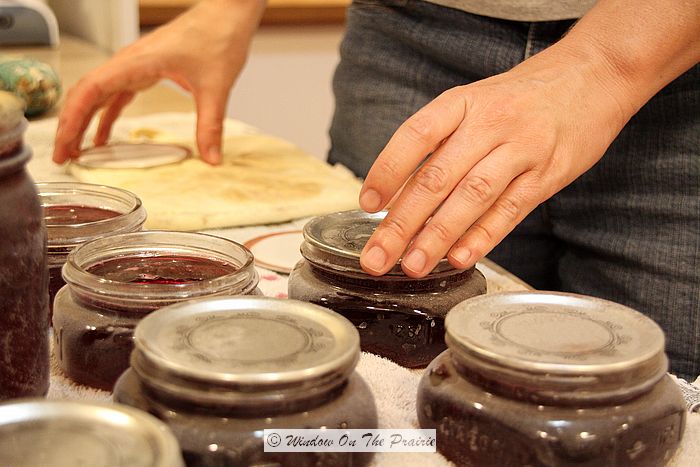 Remove the rings from the hot water and put on the jars. Tighten until just snug. Don’t overdue it. 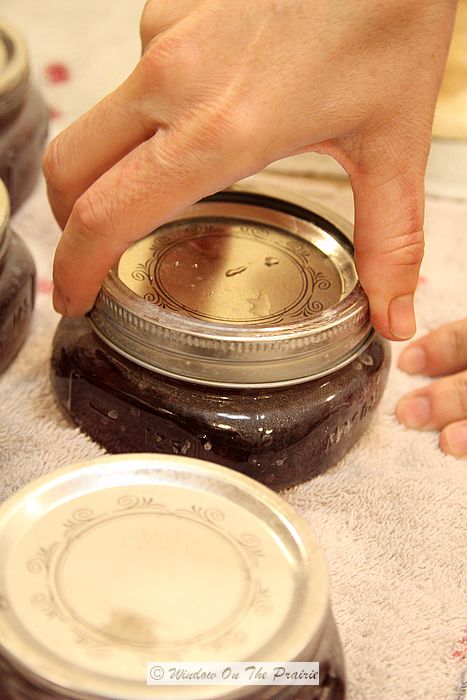 Using a canning jar lifter, put the jars back into the water pot. Make sure that the lids are just under the surface of the water. Remove excess water if needed. Put only the number of jars into the pot that will fit on the pot bottom, don’t stack them. Put pot back on the stove, and bring to a boil. Boil for 5 minutes. 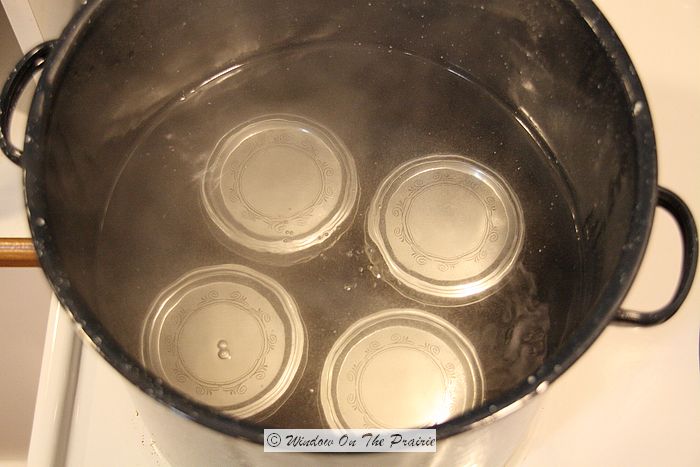 In canning terms, this is called a “water bath”. This kills any lingering bacteria. Remove jars from water using the canning jar lifter, 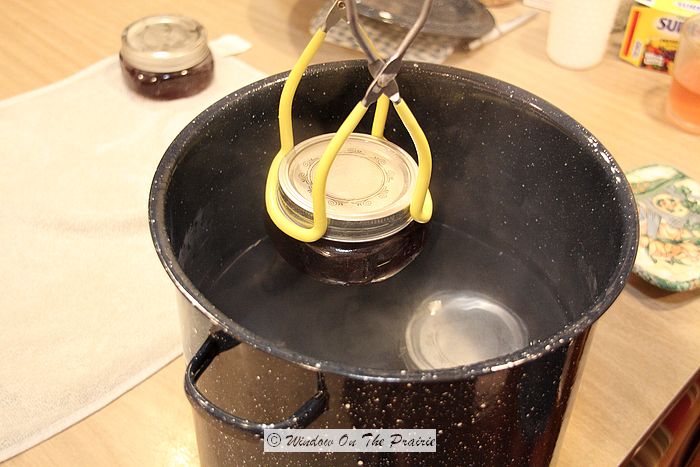 and place on a towel. 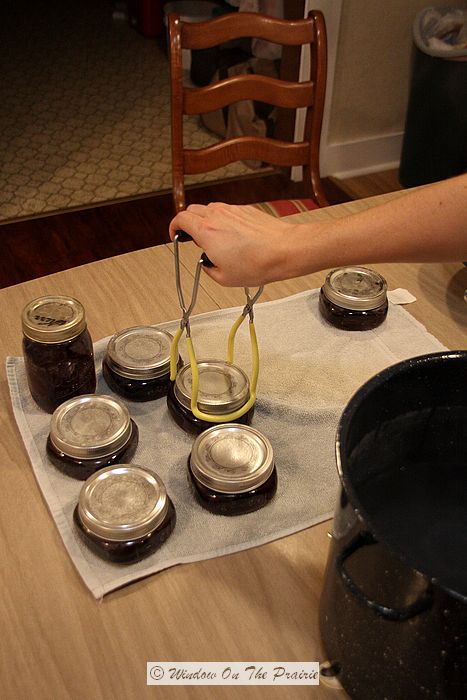 Give a water bath to the remaining jars following directions above, and then place those on the towel as well.

The lids will pop, indicating that a good seal has been achieved. You can verify that the jar has sealed by looking along the top of the lid. Before it seals, there is a little rise in the lid center. After it seals, there should be a little indentation in the center. Any jars that have not sealed after they cool need to be refrigerated. Sealed jars do not need to be refrigerated until after they are opened. 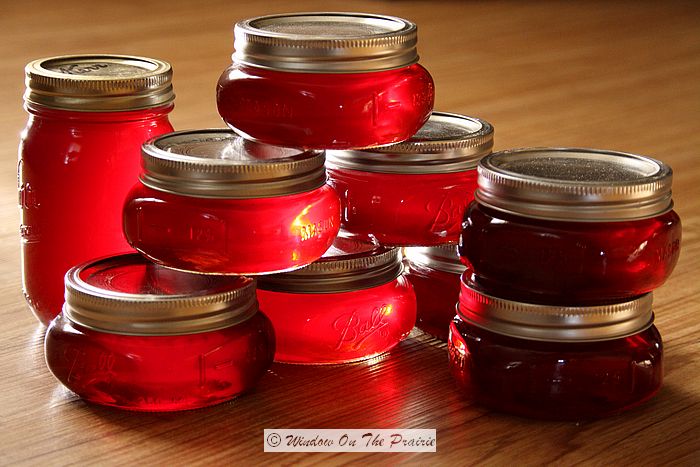 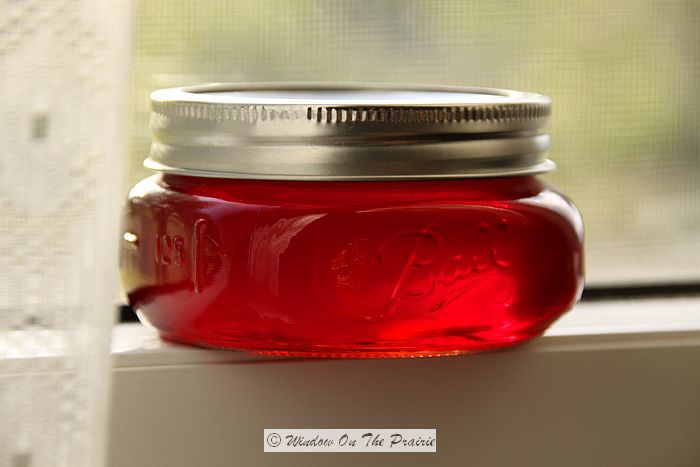