In yesterday’s post, I shared with you how Harland helped one of our cows with a difficult birthing. You can catch up with that story HERE.

So, after the calf was safely delivered, we released the cow. For our safety, she had been tied up during the birth via a lasso around her neck and a halter on her head, both tied to a post. Harland removed the lasso first, and then the halter. She got to her feet and promptly stepped into the halter and it caught on her front foot. We waited for her to take another step out of the halter, but instead she stepped on the lead rope of the halter with her back foot which tightened it up on her front foot. We stared in disbelief. This was about 8:30pm, and all we wanted was to go home.

Well, the only way for Harland to remove the halter without getting his head kicked off was to lasso her again and tie her to the post. But since she had just been through that hated experience, she was onto Harland and his wily ways. It required some careful tap dancing, but he finally got the lasso back on, and then double wrapped it around a post, and then double wrapped it around a crosspiece of wood nailed to another post. All the wrapping creates friction so that even a puny person like me can hold onto the rope and restrain a 1000 pound cow. He then began to draw in the slack on the rope trying to bring her against the post and secure. Well, he got her within about 6 feet of the post, but because she was angry and trying to escape, snorting and dancing around, he was not able to draw in the rest of the slack on the rope.   So he decided to just try and get the halter off her foot without drawing in the rest of the slack. In hindsight, not a good idea.

“Here, you hold the rope.” Reluctantly I got into the pen. My job was to pull on the rope maintaining tension and not to give her any more slack. Then Harland bent down near her front foot to remove the halter. She refused to hold still, and after a period of trying to evade him, she then decided she’d had enough of this puny human.

She turned on him, trapping him in a corner of the pen driving him against the wall with her 1000 pounds. He and she struggled for a while, but he finally got out of that jam, and then moved to the other end of the pen where he knelt down again near her foot to remove the halter. This time she lowered her head and drove him into a corner against a gate where she proceeded to wallow on him like a dog on a rabbit. I held onto the rope maintaining tension so she couldn’t get anymore reach which would have allowed her to stomp him with her feet. Harland was on the ground, hands over his head in a fetal position while she pummeled him with her head putting as much weight on him as she could, and straining against the rope while I held onto for dear life.

I desparately wanted to help Harland, but I was across the pen and didn’t dare let go of the rope.

I don’t know how long it went on, but finally the B-tch paused long enough for Harland to crawl out of her reach. He had lost his hat and glasses and went back to find them, picking leisurely through the straw, like a gardener looking for weeds. He finally found them, dusted them off and cracked a smile at me.

I was ready to call it a night.

Sometime during the fracas, the wooden cross beam the rope was wrapped around had been torn partially loose from the wall, giving the B- even more slack as now it was only wrapped around the post.

I’d had enough. If the B- wanted to keep that halter on her foot, I didn’t care. But Harland was determined, and after much tap dancing around while the B- continued trying to kill him and me(fortunately I was able to keep just out of her reach), he finally got it off her foot. Now all we had to do was remove the lasso from around her neck and escape out of the pen. Harland took over holding the rope, and I crawled over the gate to freedom. Harland managed to get the lasso off her neck, at which point she came after him as he made a run for the gate to climb over. As she neared him, he grabbed her nose and held it away from him turning her head away and preventing her from pummeling him again as he climbed over the gate to safety.

Now alone in the pen, the B- turned her rage against the gate running her head beneath it and trying to lift it from its hinges, snorting and pawing at the ground.

During all this time, her calf had been lying in the straw in an adjoining pen, and now Harland told me to open the gate so he could put the calf into the same pen with the B-.  I questioned if we shouldn’t wait until she calmed down, and he replied that the sight of her calf would calm her down. So as she continued to work the gate over on the far side of the pen, we slipped the calf in with her and then waited. Harland made some bawling calf sounds to get her attention and I joined in. I can do a pretty mean imitaition of a young calf, one of my rare talents.

“Mmmmmm-aaaaaa” “mmmmmmm-aaaaaa” we both called. It worked. She took a break from assaulting the gate, and turned around.

She walked across the pen and stood over the calf panting from her wearisome exertions against the puny humans. We watched and waited out in the dark pasture. She finally reached down and began to lick her baby and clean it up. We sighed in relief, collected our gear, and headed home.

Once there, I told Harland I wanted to get out of the cattle business, and then I cried all over his shirt. Later, we had a drink as we sat at the kitchen table and compared injuries.  Harland was a myriad of bruises across his chest where she had been driving her head at him, and on his back from being pushed against the gate. He also had a growing knot on his head. His “unbendable/unbreakable” eyeglass frames were bent. My hands were raw from holding the rope (one of the few times I’ve been caught doing a job like this without gloves, darnnit).

Harland had roped down cows many times, but had never been attacked this way. He made jokes about the B- having anger management issues….

We reviewed the whole incident. We shouldn’t have released the lasso before the halter. The lasso should always be the last thing done before exiting the pen. That way she wouldn’t have had the opportunity to step into the halter and catch it on her foot. And we should have been using a quick release halter. That night Harland ordered one online. The next day he ordered a better lasso that is not supposed to be as stiff and will be easier to pull up on slack. He also ordered some sort of hand crank system that reels in the cow to the post like a fish on a line. All these improvements should make working with cows in close quarters easier and safer.

Farming is one of the most dangerous professions. Getting into a pen with a 1000 pound animal is a scary but necesssary part of the job. Hopefully with our improved gear we won’t have to go through an ordeal like this ever again.

And as for the B- ? Well….. all’s forgiven. After all, from her point of view her behavior was justified. There she was trying to have a calf, and the humans came along put her in a pen, tied her to a post, and the male human stuck his arm up her personal areas. Then just when it looked like she was home free, they roped her down again, and chased her around grabbing at her foot. Intolerable, she thought. She was defending herself against what she perceived as a serious threat.

By the next day, she was back to her normal cow self, watching from a respectable distance while Harland ear-tagged her calf… 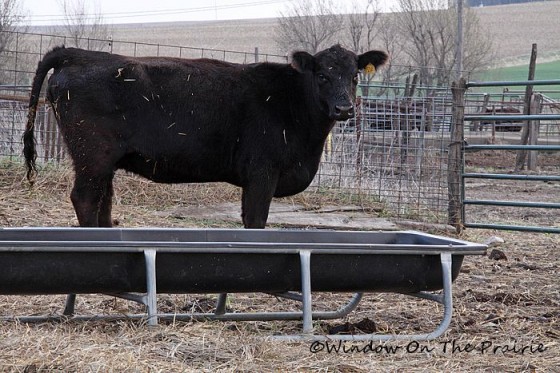 and dreaming about being released out into the grassy pasture with the rest of the cows and calves, and away from the humans. 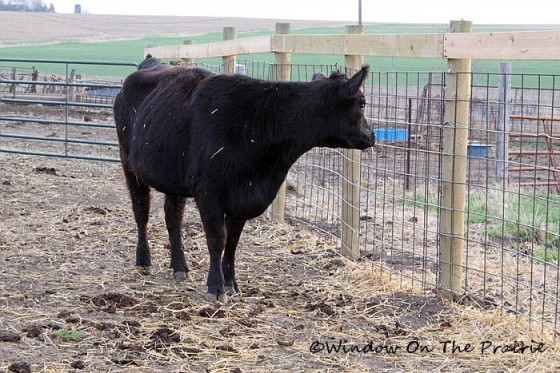