Supper In The Field

Yesterday, Harland started on the corn harvest. Earlier in the summer, we got just enough rain for the corn to tassle and make ears. The yield (bushels per acre) won’t be the best, but we are fortunate to have something to harvest.

Harland hadn’t been in the field very long, when he got a fire page on his fireman radio. About a hundred large haybales on fire! He left the combine in the field, and raced to the fire barn in his pickup. Once there, he hopped into the water tank truck and sped off to the fire. It was at a farm a few miles north of us where the farmer had piled up his hay crop alongside his silage, both of which were to be used as feed for his cattle this winter. A bulldozer was pushing the silage away from the hay to try and salvage it from the flames. Harland supplied the firetrucks (all volunteer firefighters) on scene with water and made a couple trips to town to refill the 6000 gallon tank truck. A neighbor also chipped in with his own 6000 gallon water tank truck. They worked the fire all afternoon. It’s pretty much impossible to put out a hay fire and the best to hope for is to contain it.

After about 4 hours, the fire was no longer burning and Harland headed back to the fire station. He called me as I was on my way home from shopping after work to say that he was headed back to the cornfield. He said he would have to attend a city council meeting in about an hour regarding some fire department business (he is a dept assistant fire chief) and wouldn’t have time for supper, so he would eat when he got home after the meeting about 10pm.

“No, no”, I said. “I’ll bring you something to eat in the field.”  So when I got home, I unloaded the groceries, changed into shorts and a t-shirt, made Harland a chicken sandwich, and grabbed a couple granola bars and a drink. I slipped into my mudboots, and headed out in our little 4-speed pickup.

Why mudboots you ask? No flip flops in the field around heavy equipment, and I didn’t want to stop to tie shoelaces, so the boots were quicker. And made me look oh-so-fashionable too.

I left the road and entered the field, and drove a narrow grassy path looking for Harland.

Along the way, I took a few pics with my cellphone. 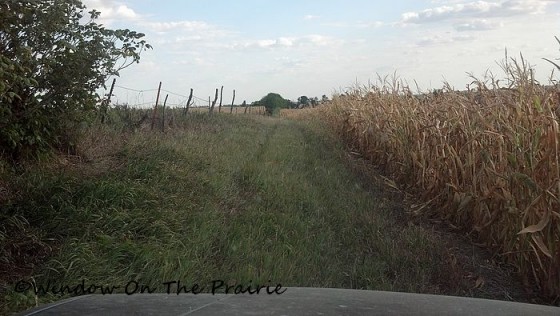 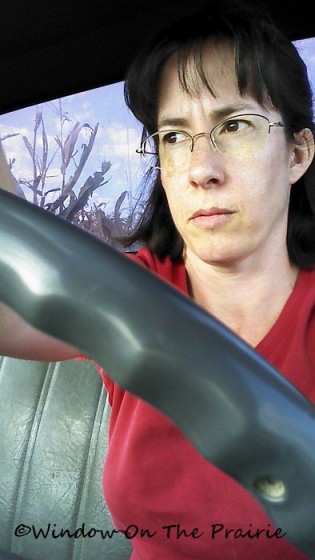 Finally the field opened up where the combine had been through. 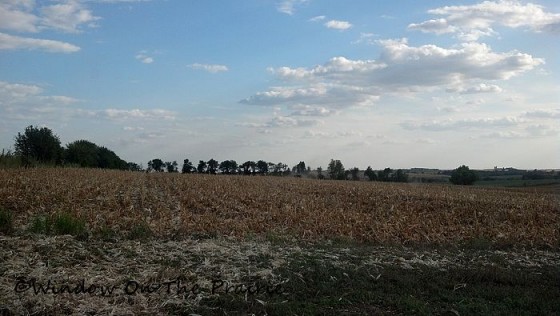 And I caught sight of the combine. 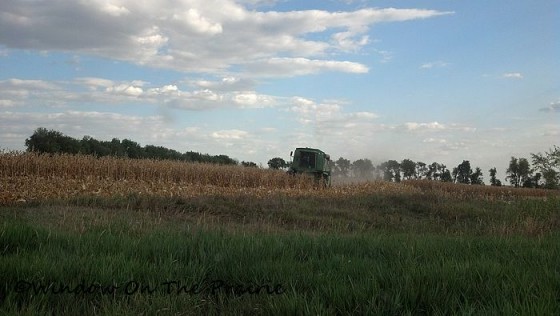 I climbed into the cab and handed Harland his supper. 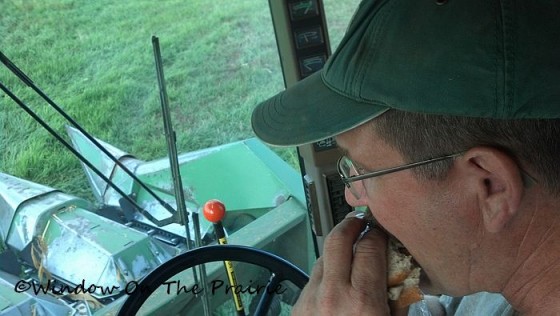 And he ate while the corn unloaded into the truck. 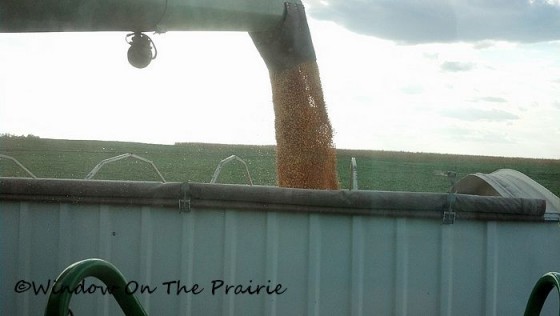 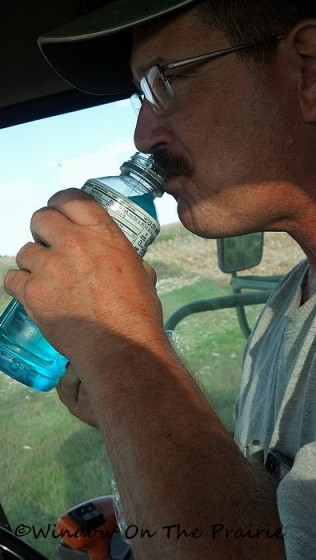 Then it was back to work. 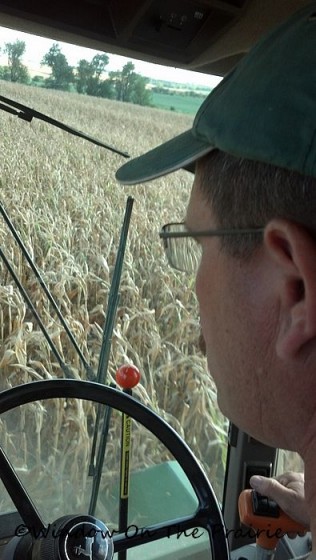 Looking out the front window of the combine: 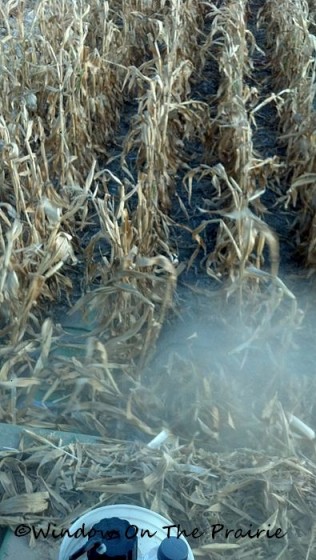 A few more passes across the field, and it was time for Harland to go to his meeting. We left in separate trucks as I was headed home . He followed me down the road, and we both stopped to wait for a passing train. 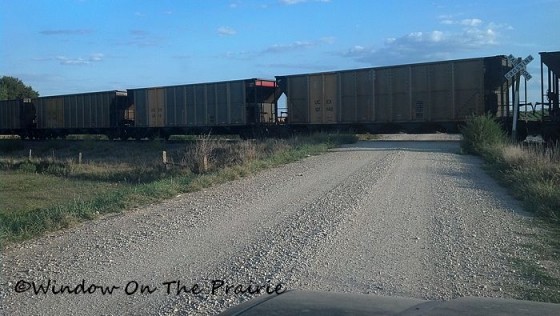 He pulled up alongside in his pickup and I hung out my pickup window to chat.

And with that, the train passed through and Harland pulled ahead of me crossing the tracks. I followed along behind. At the crossroads, he turned right to go to town to his meeting, while I headed home for supper.

At 9:30am this morning, I got a text on my phone. Firefighters were again dispatched to the same hay bale fire. It had flared up again. There just isn’t enough water to completely put out 100 tons of hay. It will probably smolder for a week, and I’m sure this won’t be the last trip they’ll have to make there before it finally burns itself out.

Tags: bringing supper to to cornfieldcorn harvest kansasSupper In The Field