Last weekend, I was driving down a gravel road several miles from home when I saw some sort of fruit hanging on a couple trees flash by my window. I slammed on the brakes, put it in reverse and backed up stopping alongside two large peach trees growing up out of the ditch and loaded down with ripe fruit. The branches were hanging down to the ground burdened by the weight of their bounty. I picked a few and took them home to ripen.

A couple days later I washed and sliced them open. They were juicy and tasted good. And, as an added bonus: They were freestone. Yay!!

So yesterday Harland and I went back and filled two 5-gallon buckets full of peaches. Visions of peach pie, cobbler and jam filled my head as I filled my bucket. Within just a few minutes both our buckets were full and we placed them carefully into the pickup bed.

Back home, Kitty admired our bounty. 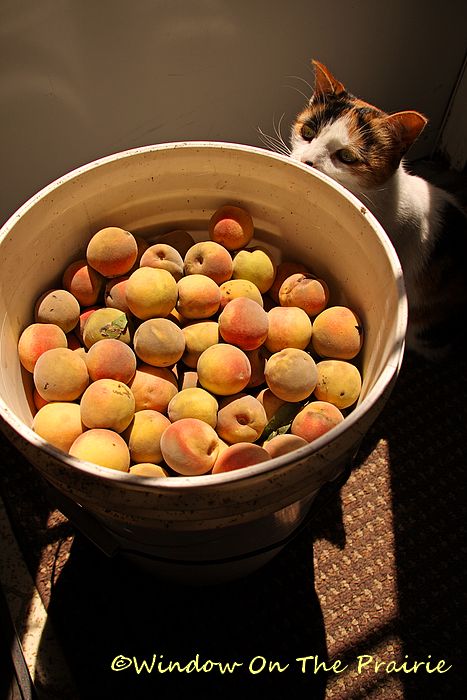 Kitty:  Can I have one to play with? 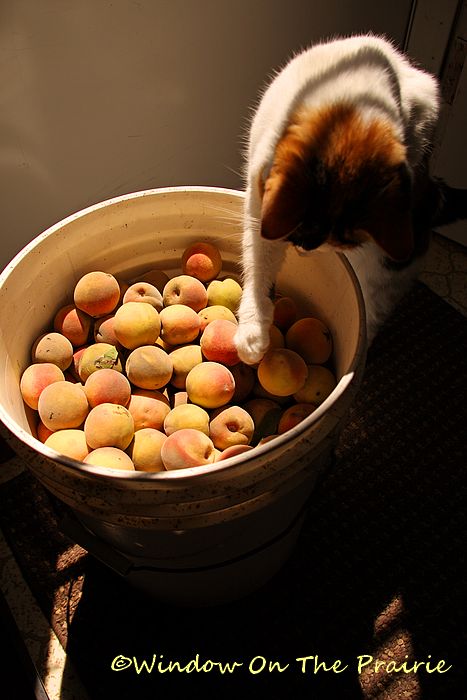 Me:  No, Kitty. We shouldn’t play with food.

I set to work washing the peaches to remove the road dust. Once clean, they were quite pretty. 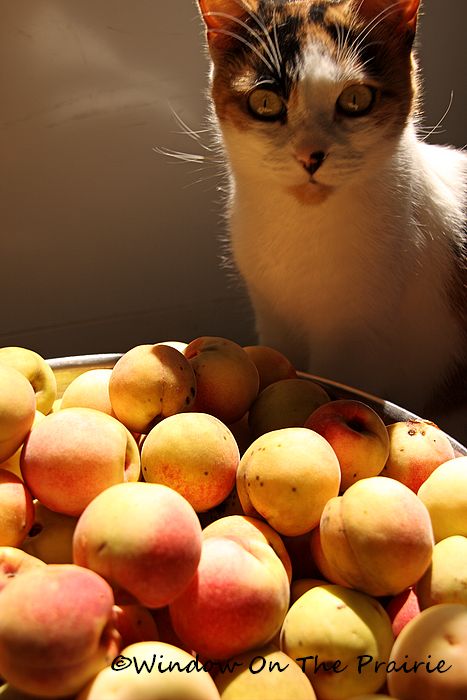 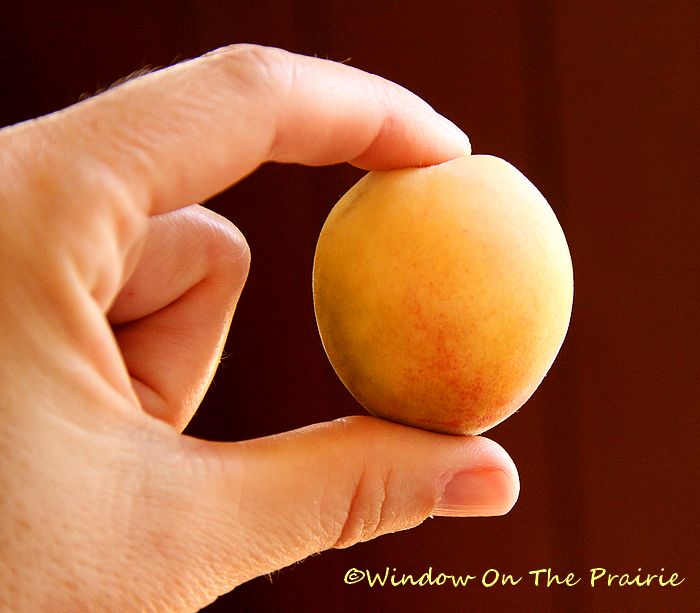 There used to be an old homestead near the trees, so there’s no telling how old this variety is. Probably late 1800s. 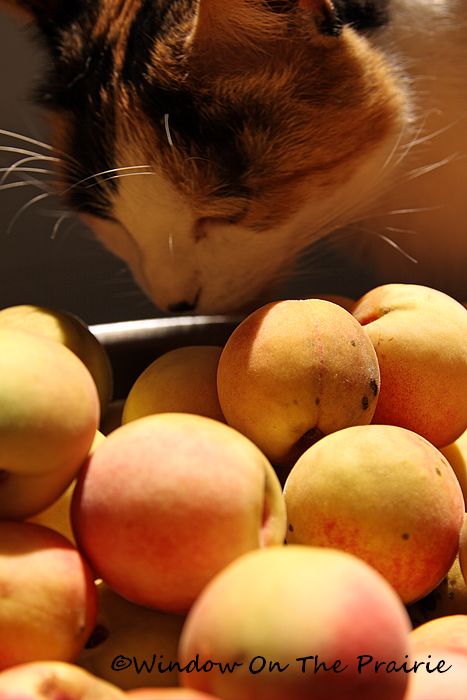 Kitty:  Mmmm…they smell nice. Can I have one please? 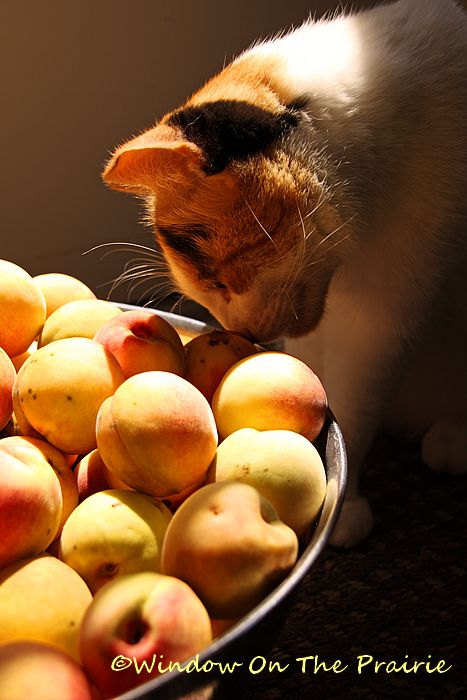 My goal was to peel, pit, and cut them up into freezer bags. To get the peeling to come off easily, I put them in boiling water for a couple minutes, 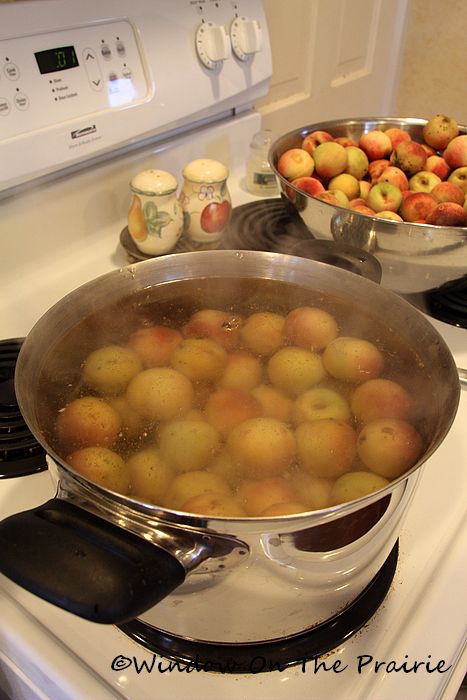 and then let them rest in the sink in ice water. 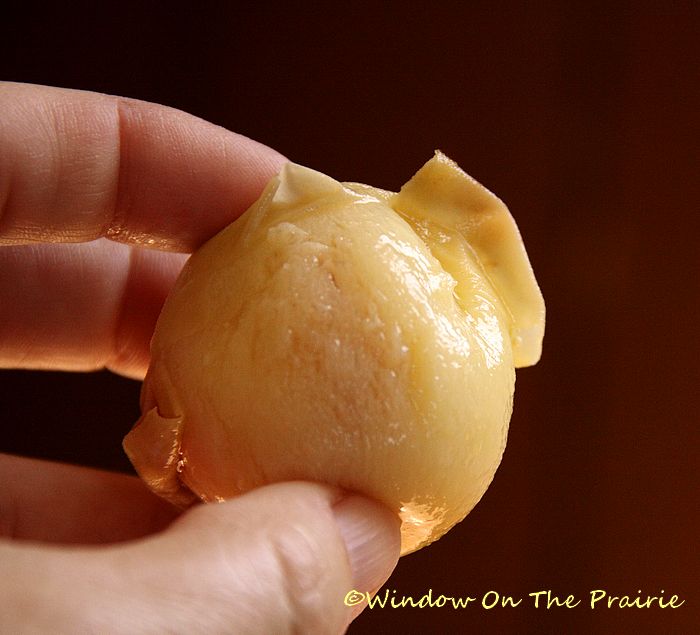 The peeling was coming off the riper peaches as I removed them from the ice water.

Then Harland and I peeled, pitted, and sliced them into freezer bags. It took most of yesterday afternoon to finish one of the 5 gallon buckets, but we got 7 1/2 quarts frozen peaches.

Later after supper, I emptied the other bucket out onto the floor on newspapers to ripen a little further as there are some green ones mixed in. Kitty watched. I told her to leave them alone. Apparently she has a hearing problem because her little paw immediately reached out and starting batting the peaches around a little. I got them back onto the paper and told her to behave.

Sometime later, I was standing in the kitchen talking to Harland when a flurry of high-speed calico fur, and a rolling, bouncing peach came through the kitchen between our feet.  We laughed in spite of ourselves at our naughty cat. At the far end of the room, Kitty let her peach rest for a second and looked up at us innocently. I sighed. Harland pointed out that the peaches would probably be spread all over the house by this morning.

So I collected them up back into the bucket and took them to the spare room where I spread them out again on newspaper while Kitty watched. Then I picked her up and took her out of the room closing the door behind me.

Tags: how to freeze peaches