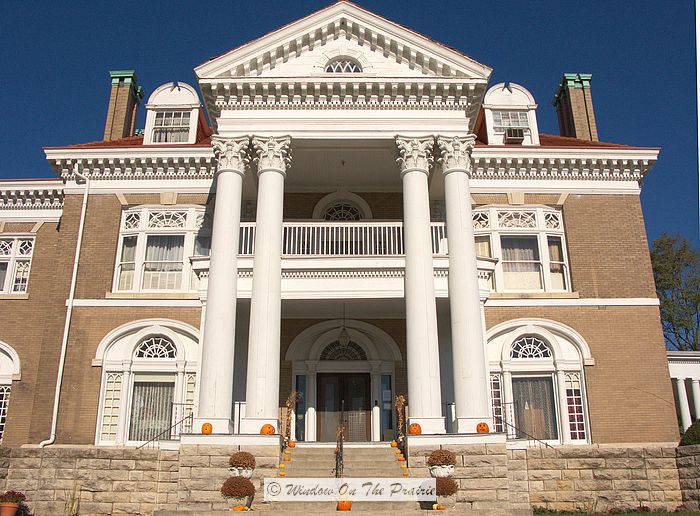 I was looking at some pics from a couple years ago back when Harland and I were dating, and I ran across some of a mansion we toured in Hannibal in October 2007. For those of you new to my site, Harland is the man of the house- my husband of two years, love of my life, and keeper of my heart. Swoon….sorry, ahem. Anyway, having grown up in Missouri, I had visited this mansion a couple times before , but Harland, a Kansas man, had never been to Hannibal. This trip was also special because we had become engaged only a few days before and were floating on a blissful cloud. Also on this trip, our paths crossed with a stray calico cat on the edge of a corn field who we took pity on and adopted. I wish I could say that life with Kitty was wonderful from the start, but it wasn’t. There were some rough days at first, and we almost didn’t keep her, but that’s a story for tomorrow. On with the tour of Rockcliffe Mansion.

In 1898, John Cruikshank, a wealthy lumber baron, had a house built atop a high bluff in Hannibal overlooking the Mississippi River. Two years later, in 1900, the 13,500 square foot 30 room home was completed. 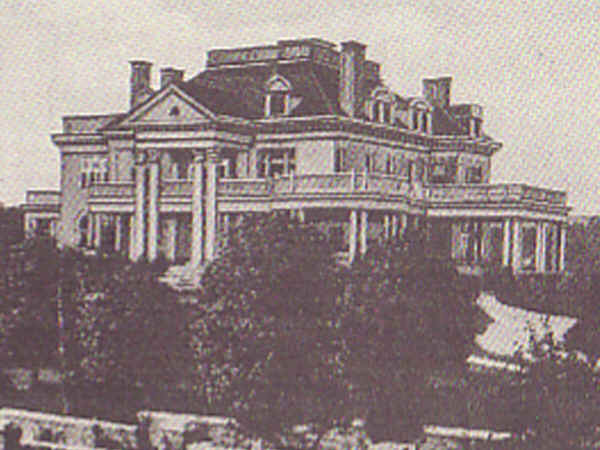 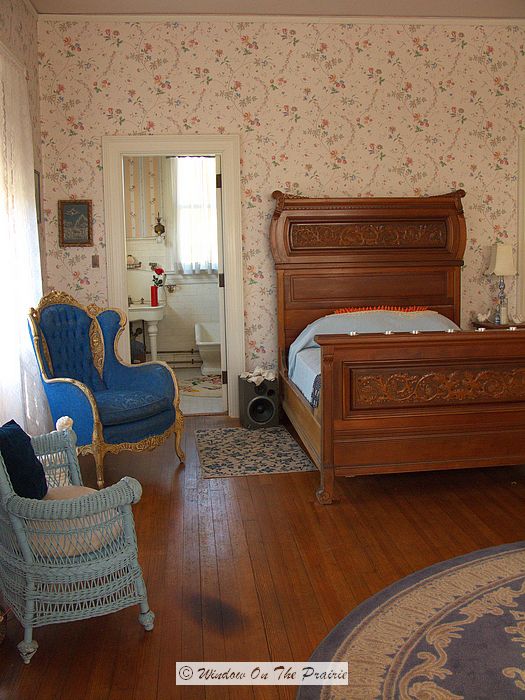 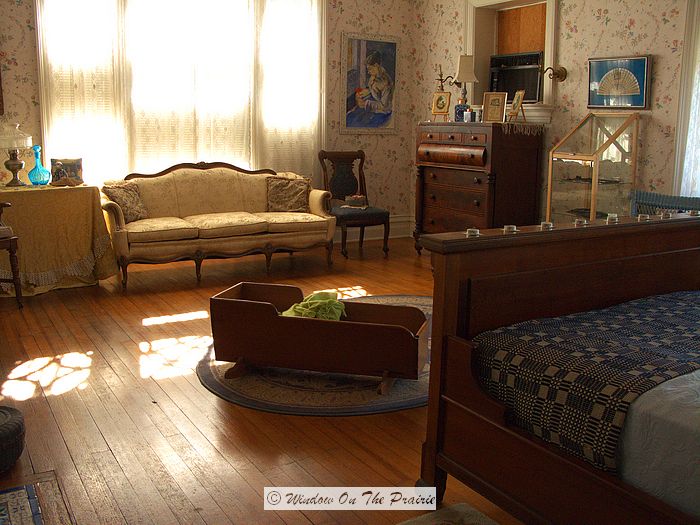 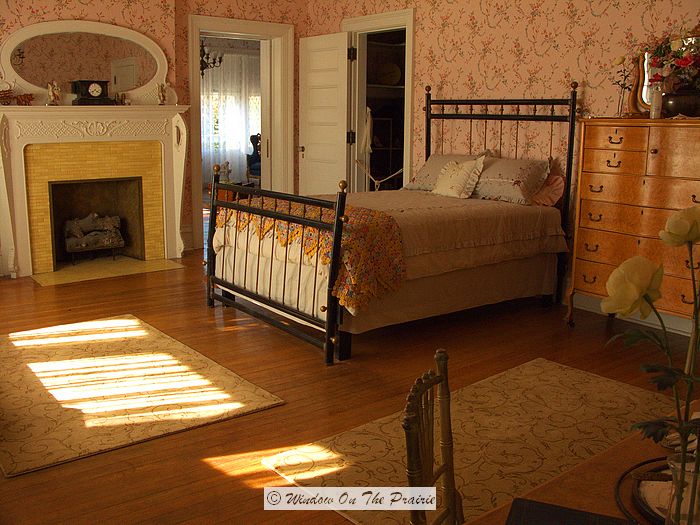 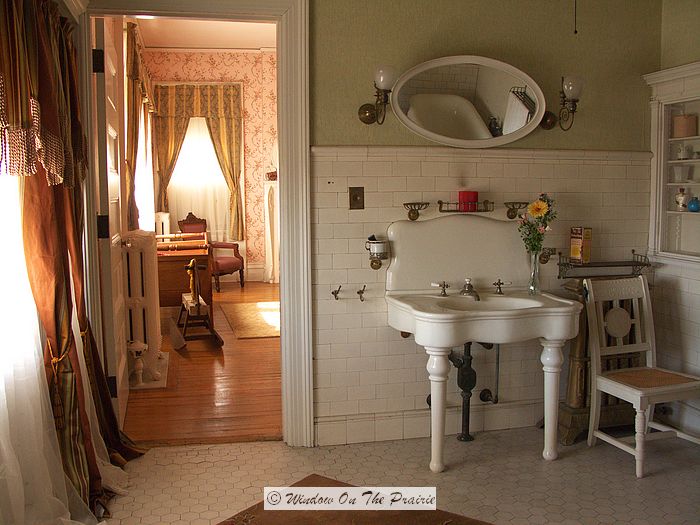 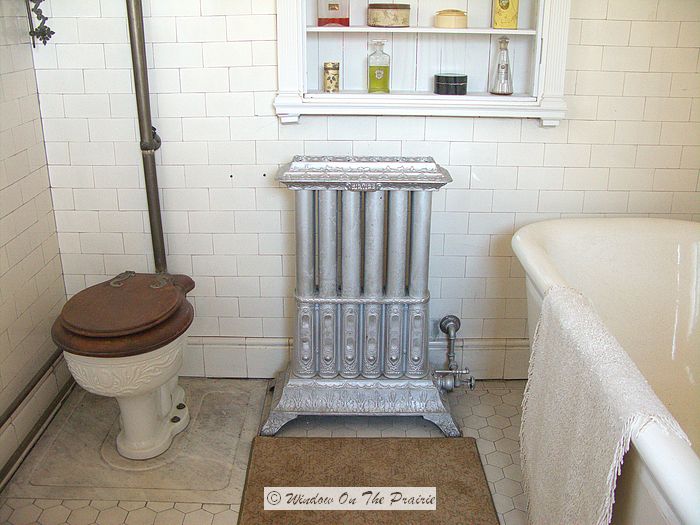 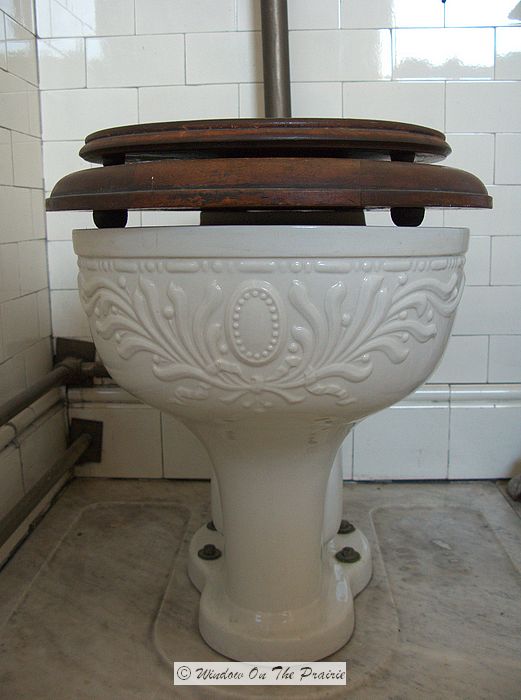 and 10 carved marble and tile fireplaces. 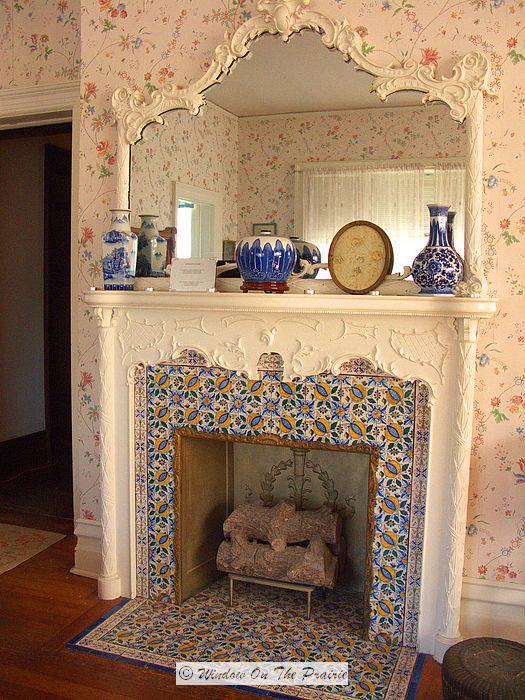 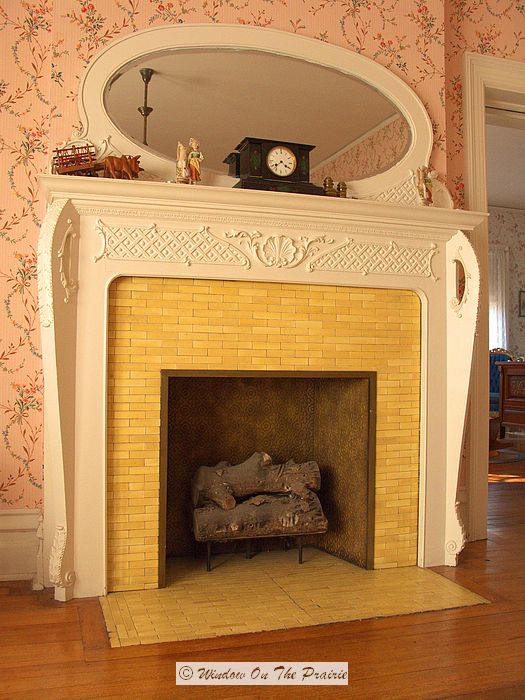 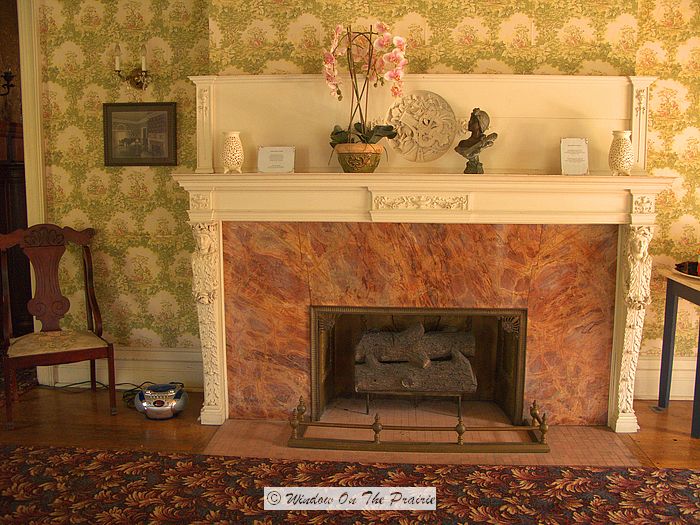 As a dealer in lumber, Mr. Cruikshank supplied the finest quality mahogany, walnut, and oak for the construction. Louis Comfort Tiffany was hired to craft stain glass windows, 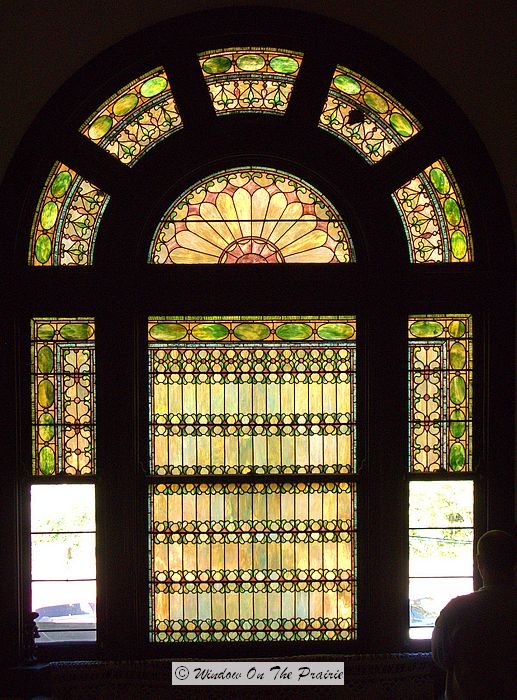 and lighting fixtures. The home was fitted with both gas and electric lights. Mr. Cruikshank thought the new electric lights might only be a passing fad, and wanted the option of having gaslight as a backup. The home included a formal dining room, music room, library, 2 parlors, 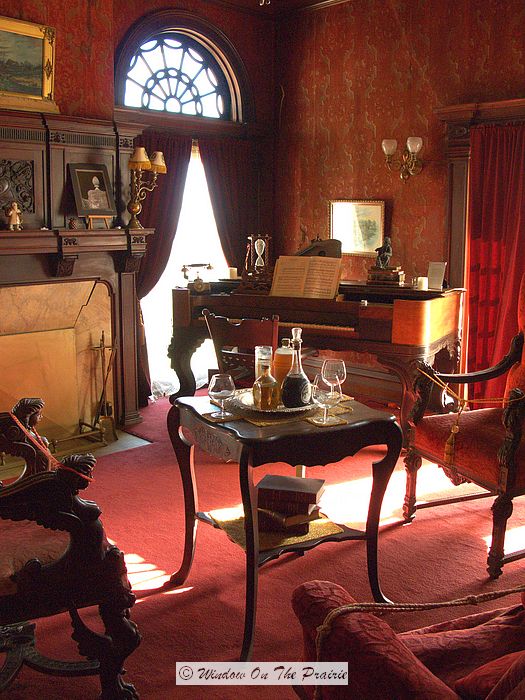 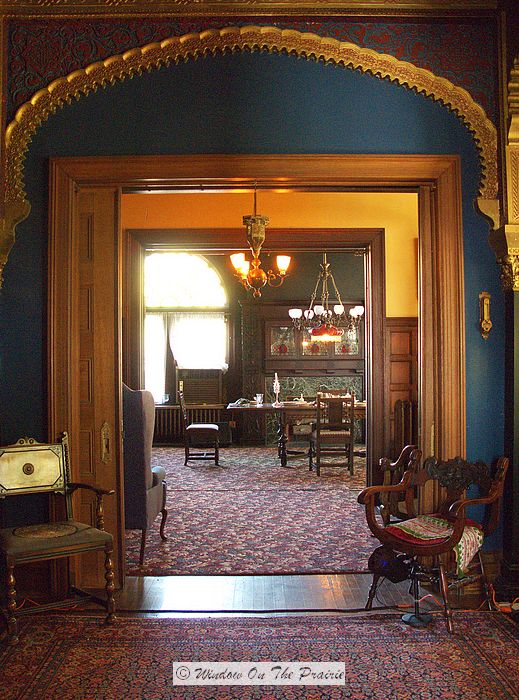 a ballroom, servants rooms, sewing room, and a classroom. The total cost was $250,000, and upon its completion, Mr. and Mrs. Cruikshank , along with their 4 daughters, moved into their spacious new home. The grounds surrounding the home were landscaped with terraced gardens, fountains, and stone walls. Seven hundred guests attended the opening of the house in June 1901, where an orchestra played for their entertainment. The family lived here for the next 23 years. One by one, the daughters married, and moved away. One of the daughters moved only as far as the house next door.

In 1924, Mr. Cruikshank passed away, and for reasons unknown, Mrs. Cruikshank, left all the furnishings, even the library books and clothing in the closets untouched, closed and locked the door. She moved next door and lived with her daughter for the rest of her life. The house remain untouched for the next 43 years except for occassional visits by Hannibal’s children who would dare each other to enter the home. In time, some of the windows were broken, the 2nd floor balcony began to rot away, and in the early 1960s, the city advised the one surviving daughter that if she did not repair the home, the city would tear it down. The daughter’s curt reply was, “Bulldoze it to the cellar.” Two weeks before the house was to be razed, 3 neighboring families bought the home, and began the painstaking task of cleaning and repairing it. There was some water damage, but structurally, the house was fine, and eventually, it was opened to the public for tours. In 2005, the house was sold again, but within a few years that owner filed bankruptcy, and at one point some of home’s furnishings were nearly auctioned off. Finally, just a few months ago, the house was purchased again, and the new owners vow to restore the home and gardens back to their original state. 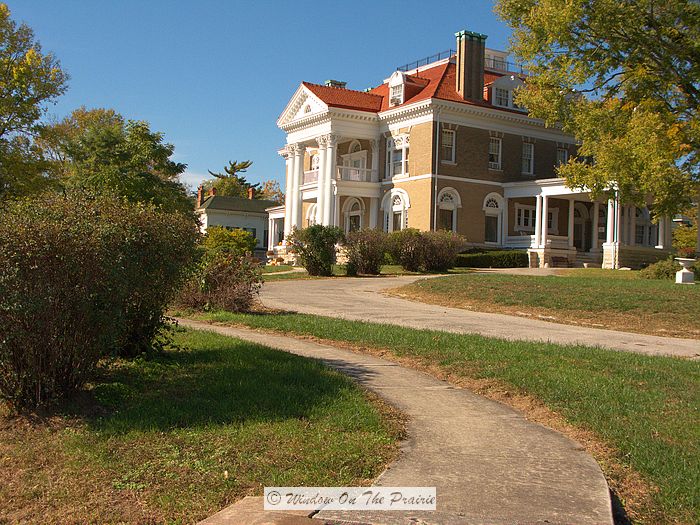 Tomorrow, Kitty’s Story: How we found her beside a cornfield in Illinois, adopted her, almost gave her away, and how our life with her has been since then. It’s us against her, and so far, she’s winning. 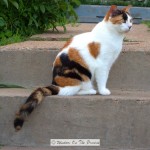