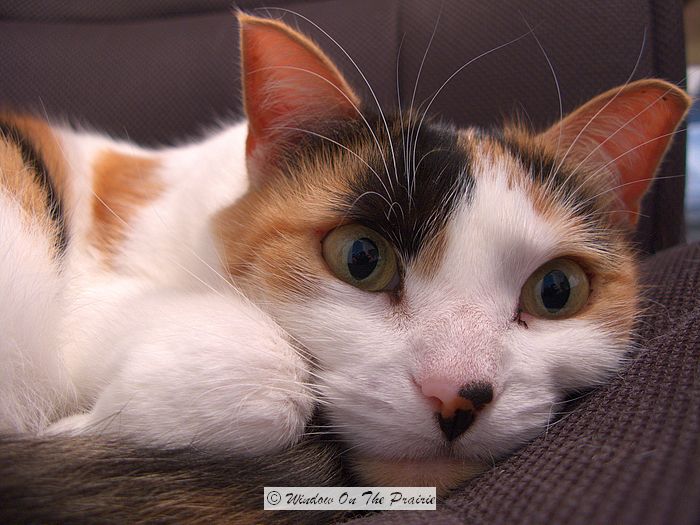 For those of you who visit regularly, you may have noticed that our housecat, Kitty, appears in posts from time to time. So I thought it was about time that I should let you know about Kitty’s history with us.

In late October 2007, my then fiance Harland, and I, spent the weekend in Hannibal Missouri. We had just become engaged a couple days before, and were in Hannibal just to do the tourist type things one does there. So we saw Mark Twain’s home, took a riverboat ride, and visited Rockcliffe Mansion, a lumber baron’s late 19th century home. One evening, we decided to cross the Mississippi river to the Illinois side to view the lights of Hannibal reflected in the river. As we pulled off the road and stopped at the edge of a cornfield, we noticed a young calico cat, who seemed very happy to see us. She was rather thin, and when we got out of our vehicle, she approached Harland. Cat lover that he is, he picked her up. She was quite friendly and treated us like long lost friends. Well, we didn’t want to leave her there as no one lives on that side of the river and we were pretty certain she had to be a “drop-off”. So we got back in the truck, with her on my lap, and drove to Wal-Mart. She enjoyed watching people in the parking lot and was so happy to be with me while we waited for Harland to pick up some food, a cat carrier, and food and water dishes. When he came back, we fed her in the back seat of the truck. She ate like a wolf. She spent the night in the cat carrier in the truck, and the next morning we fed her again, and again- she ate like a wolf.  We had breakfast at a fast food restaurant, and when we came back out to the truck, she had taken care of business in her carrier. We drove with the windows open to a remote area which happened to be Lover’s Leap, a rocky ledge overlooking the river. While we were cleaning up her business, she escaped and ran away from us. I got her back, and held onto her until her carrier was fit for habitation again. As we drove home we realized that neither of us really wanted a house cat, and so we decided to pawn her off generously give her to my sister, Martha, and her 4 kids.  They were thrilled when we dropped her off at their house on the way home.  The cat was not thrilled. She growled at the kids, and refused to let them pet her. Oh well, we thought, she’ll settle down. A week later, we learned that she was still growling, and had aquired even more endearing behavior- she was scratching the kids. She had been spending her days in the woods near their home, and came out only at night to visit their garage to eat. Since she didn’t like the kids, and since we were afraid some predator was going to get her, we took her back. Next, we tried to unload her generously give her to my brother. She took one look at him from her carrier, and growled menacingly. Ok fine, we’ll keep her. I took her home with me to my trailer in Missouri where I lived at the time. 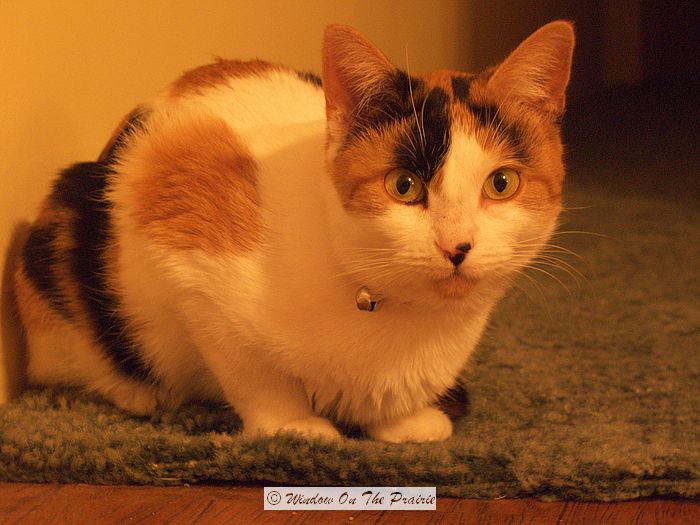 She was good about using the litter box, and didn’t cause much trouble, but she was standoffish, didn’t like to be petted or held, bit and scratched to let me know I was not allowed to touch her, and she had no interest in play of any kind. But worst of all- her food wasn’t agreeing with her, and she was rather…well….gassy. Disagreeable odors filled the house. One particularly bad night, I considered “accidently” leaving the door open for her, but reluctantly decided not to. So I switched her to a more expensive food, which cured the odor issue, but she still remained aloof and unfriendly. It was like having a rude unappreciative houseguest. I traveled to Kansas that next weekend to visit Harland, and brought her along. She traveled well in her carrier, and endured the 3 hour drive fairly well. She stayed at Harland’s house for the weekend, and then I took her back home as Harland declared he would never have a cat live in the house. Finally though, after several weeks, we started trading her off, one week at my place, one week at Harland’s. It was like shared custody. Well, the months went by, I moved to Kansas to be nearer Harland and prepare for the wedding, and Kitty, as we now called her, settled permanantly at Harland’s home. Over many months, she finally began to relax, enjoyed being petted, and started to play and frisk about.

And today, we can’t imagine our life without her. She sleeps with us at night curled up against us for warmth, keeps us company as we do our daily tasks around the house, and provides companionship when we are ill. She likes to pretend she is a lion on the African plain, and will jump us from behind to try and take us down. She also likes to go outside now, and spends time every day sitting outside the front door watching the world go by. 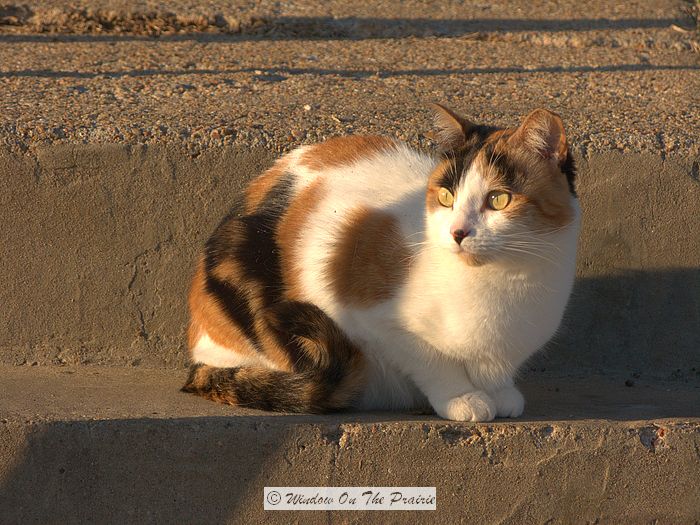 She likes to participate in our celebrations. 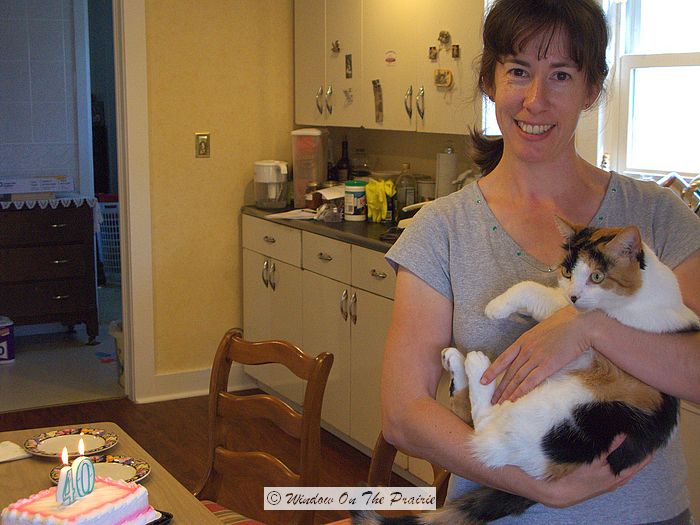 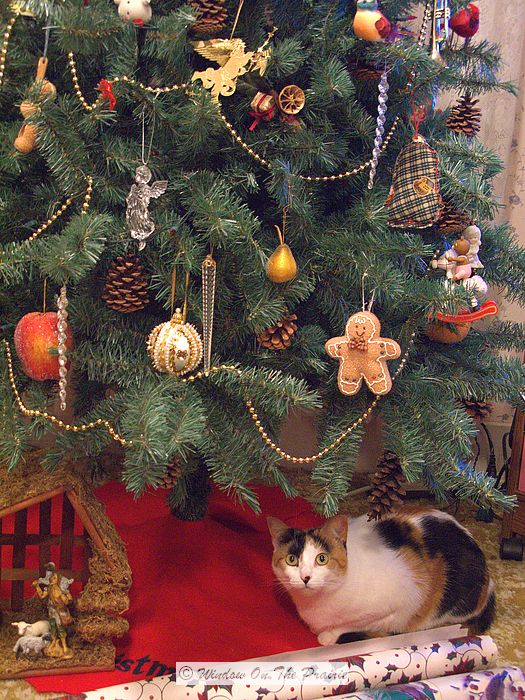 She HATES the barn cats and is vigilant about chasing them away from the house, which is a good thing as they were using my flower beds as a litterbox.  Here, Kitty(in the foreground) stares down Prancer, a barn cat, right before she chases Prancer back to the barn. 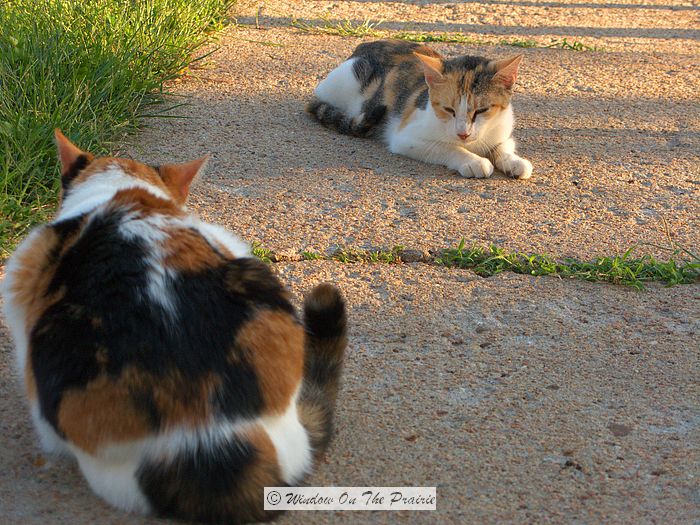 She even chases the tomcats away as she has no interest in them, and is bigger than them anyway. She thinks she looks like this: 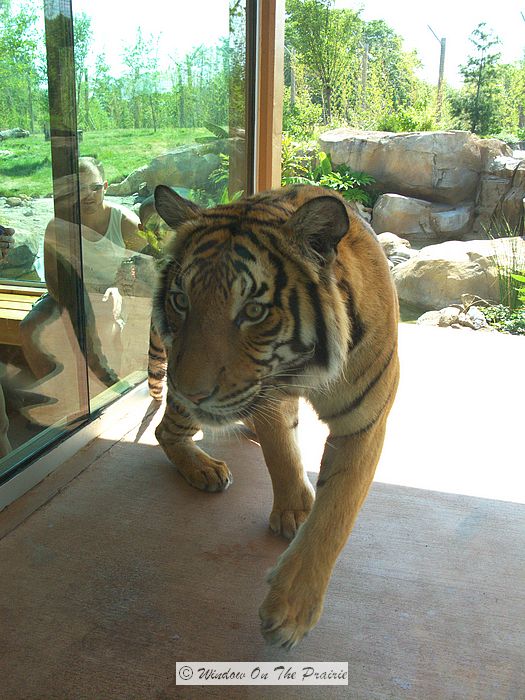 She helps out in the kitchen, 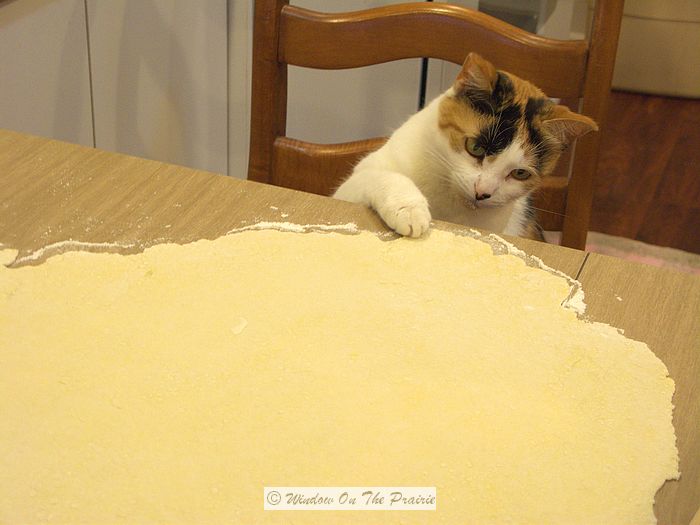 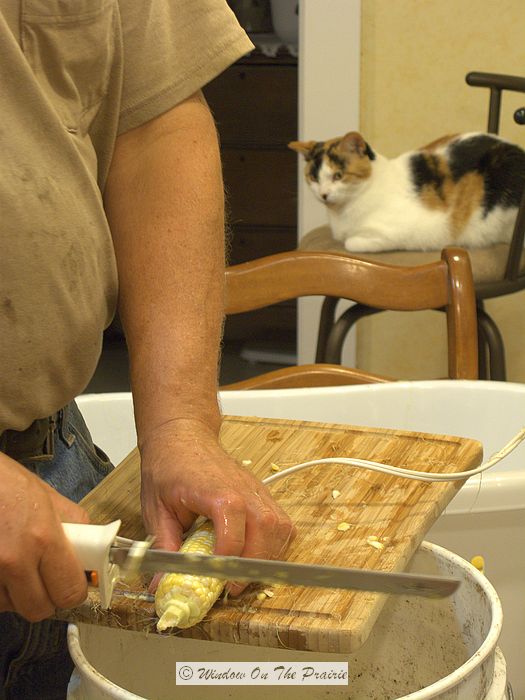 and asks only a small reward for her services. She loves to eat a tidbit of tomato. 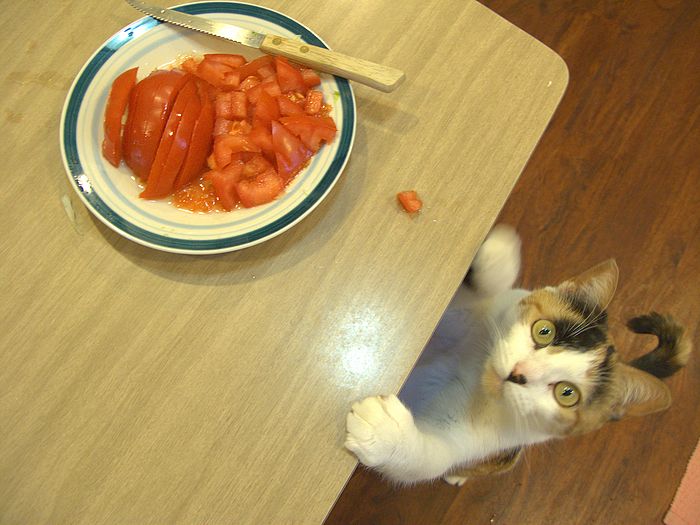 She helps with remodeling projects. 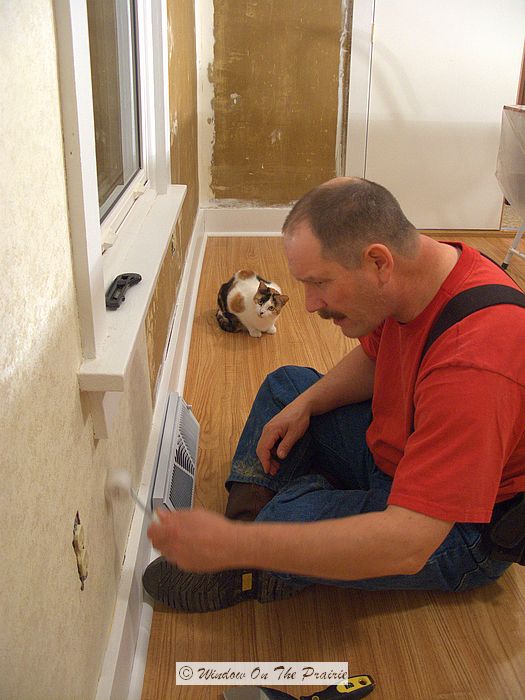 She offers her assistance in the office from her perch on the printer. 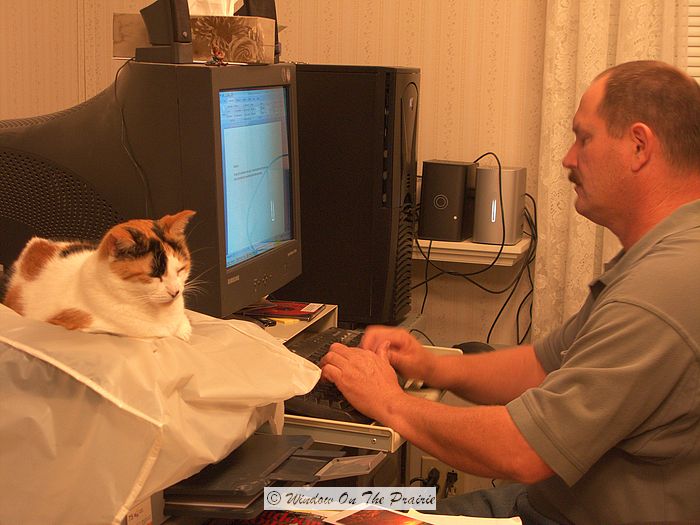 She likes to watch tv, 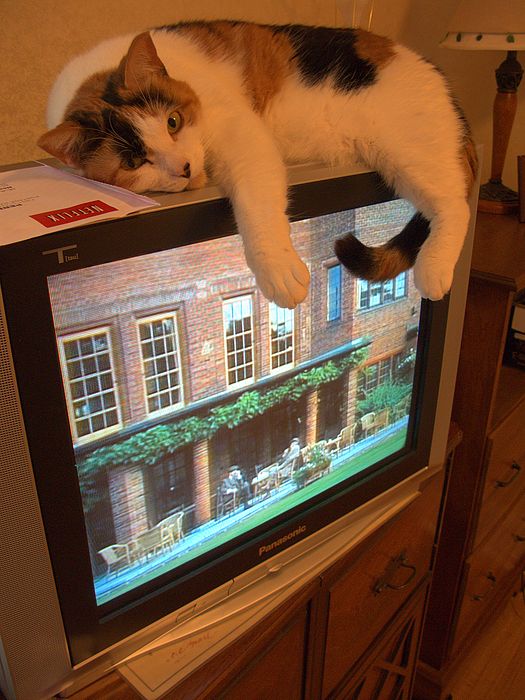 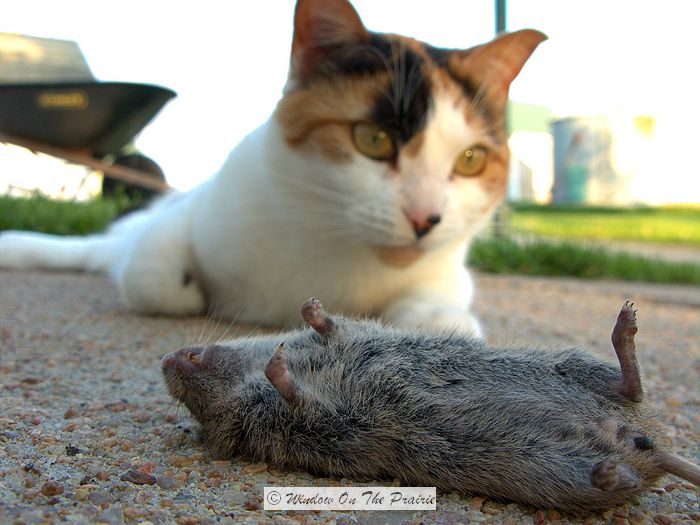 is never late for supper, 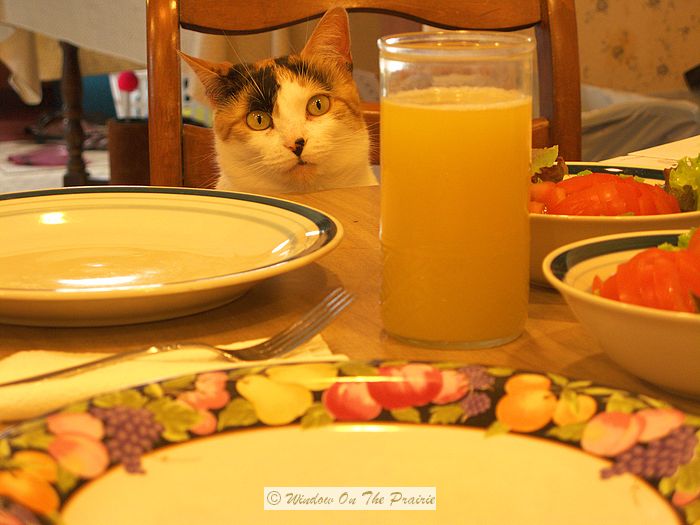 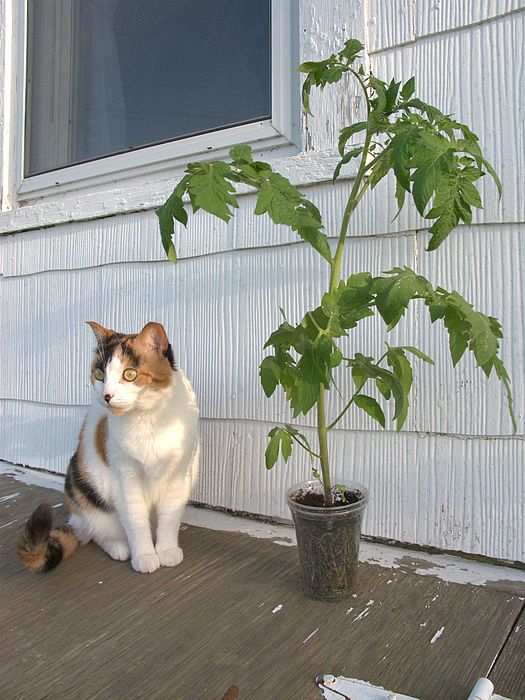 and she always gets the best seat in the house. 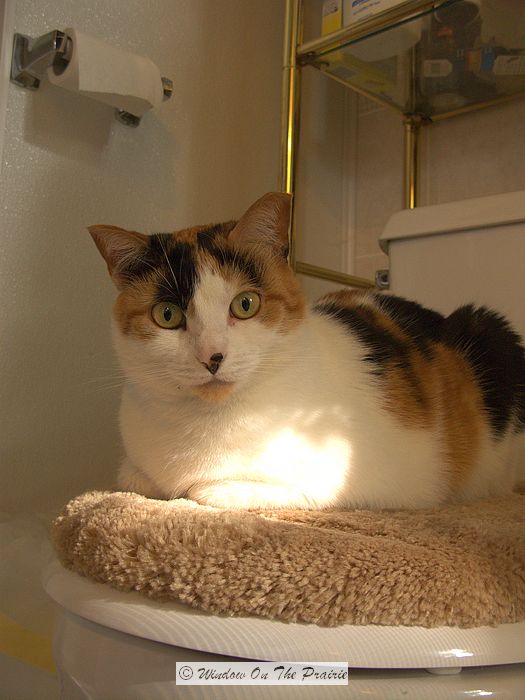 Every empty box must be explored. This holds true for open suitcases too. 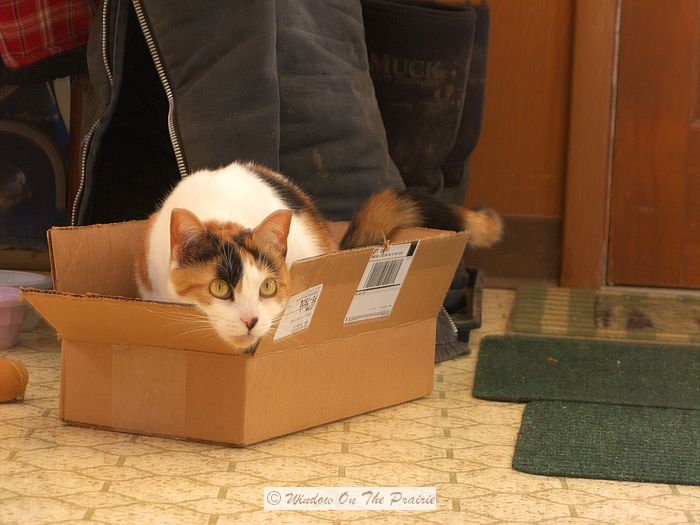 Her tongue does double duty as both washcloth, 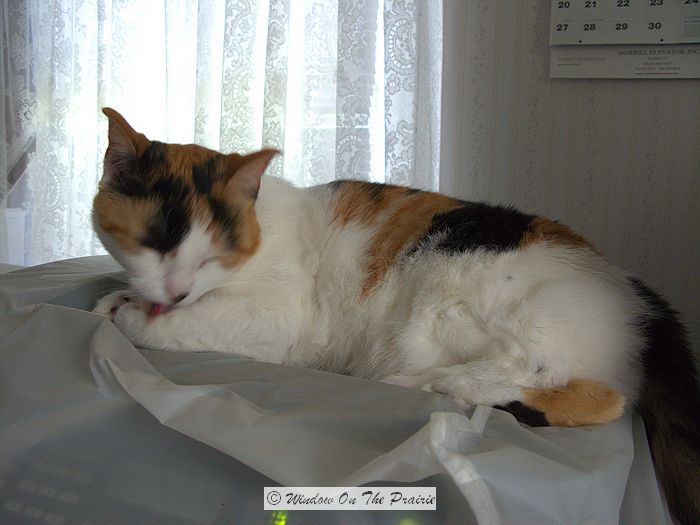 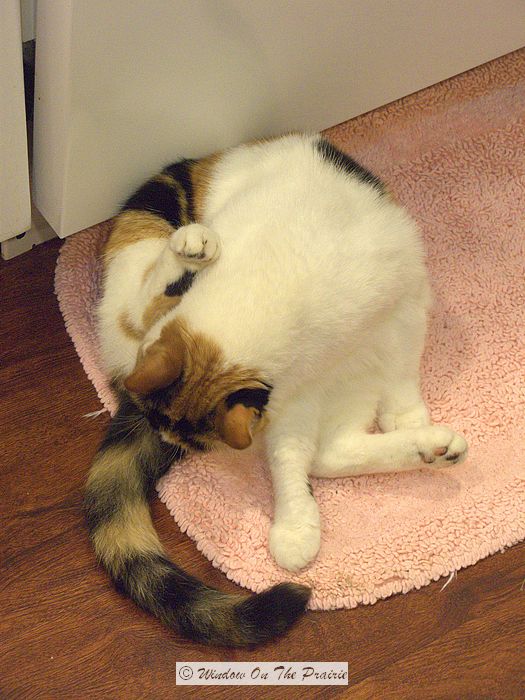 But the best part of Kitty is that she is soft, 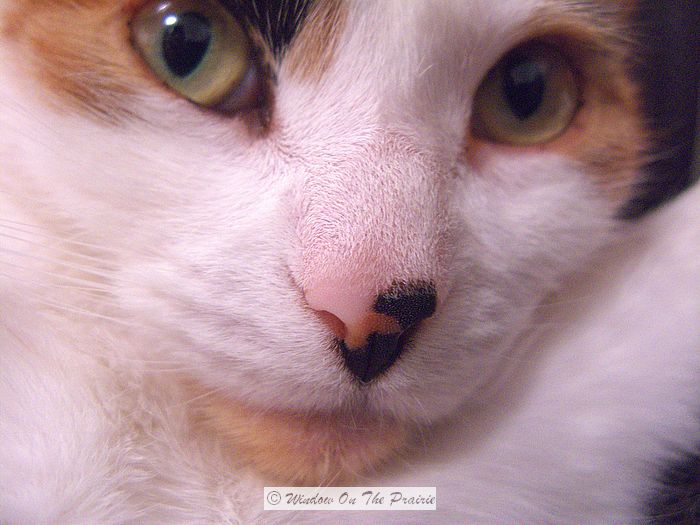 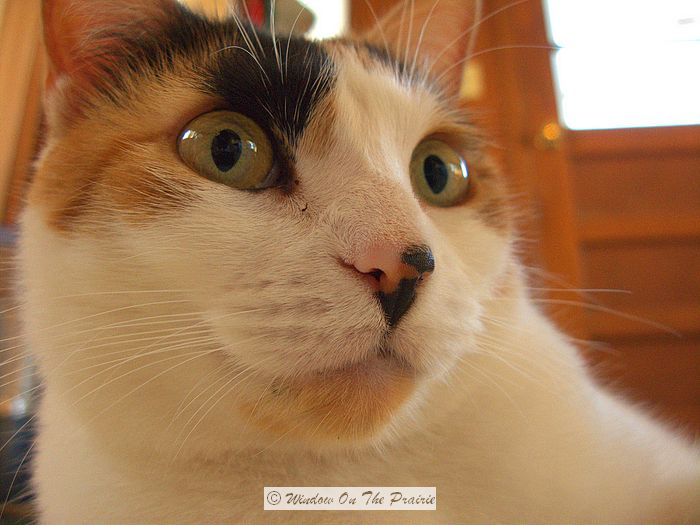 and nice to hold. 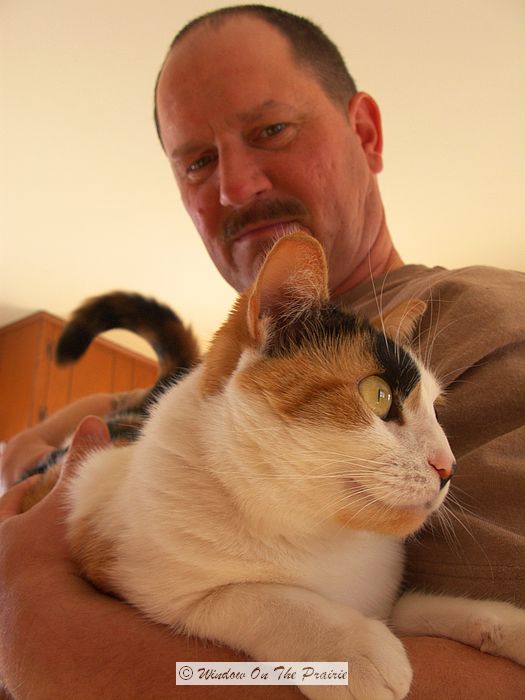 So we are very glad that we decided to keep Kitty. She’s become a part of our lives, and worked her way into our hearts.