Yesterday, Harland and went to Omaha for the afternoon. Our time was limited, so we hit just a few places, but we had a great time.

First, we went to Kenefick Park, home to 2 of the biggest train engines ever built.This is Big Boy No. 4023. 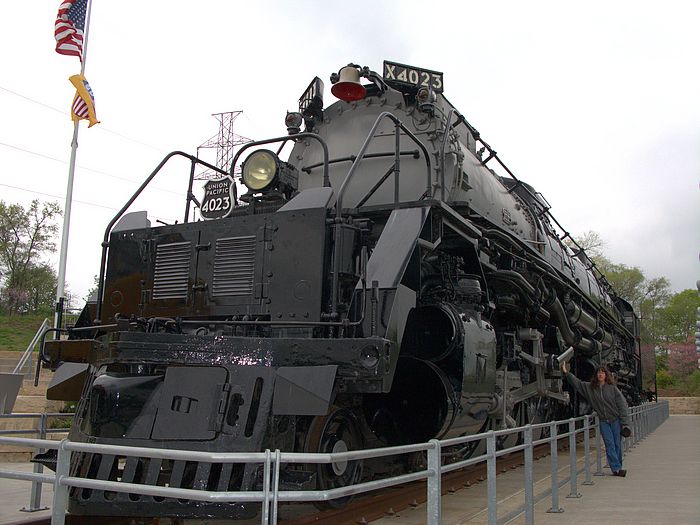 And that’s me in the baggy hoodie. (Not one of my finest fashion moments.)Big Boys were coal-burning, stoker-fired, and designed to run 7,000 horsepower at 70 miles per hour. They are regarded as the highest horsepower, heaviest, and longest steam locomotives ever built. This is one of twenty-five operated between 1941 and 1959. 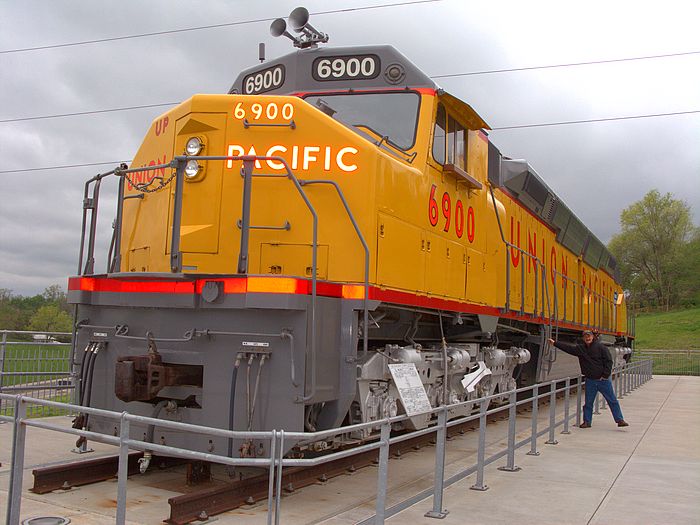 That’s Harland, my husband, holding on while it pulls out of the station, ha ha…    Anyway, like the Big Boys, 70 mph was attainable from this engine with heavy tonnage trains on level track. 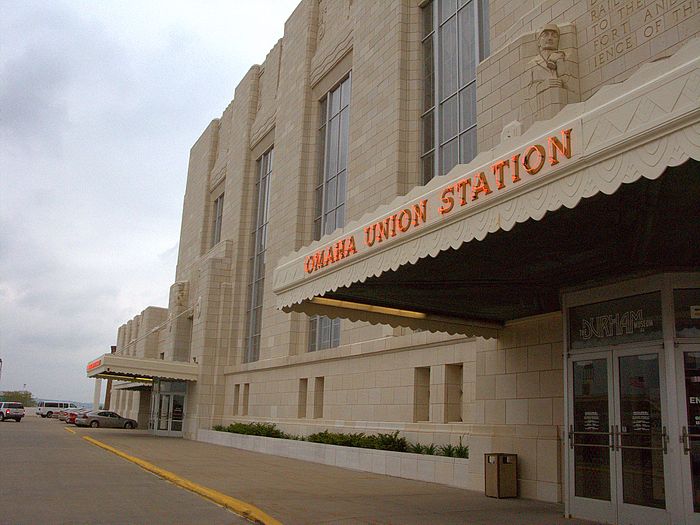 Built in 1931, it is thought to have been the first art-deco railroad terminal in the United States, and today is considered one of the finest examples of that architectural style in the country. 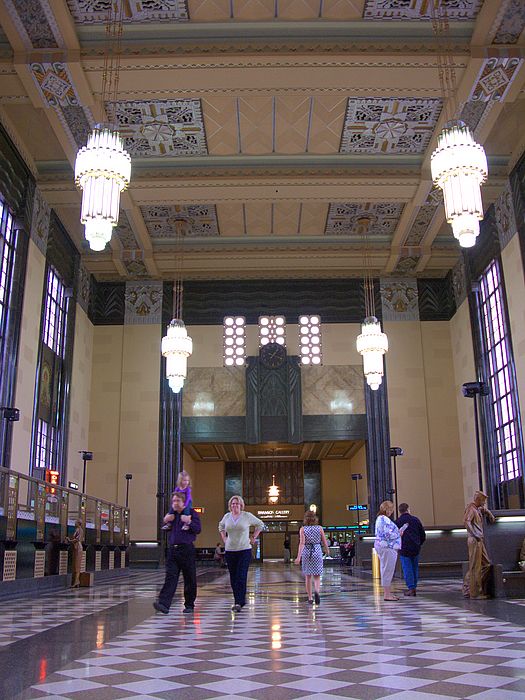 Union Station, along with the Burlington Depot located next door, made Omaha the fourth largest railroad center in the United States. At its height in1946, 64 steam locomotives were in operation bringing 10,000 passengers daily in and out of the Union Station. 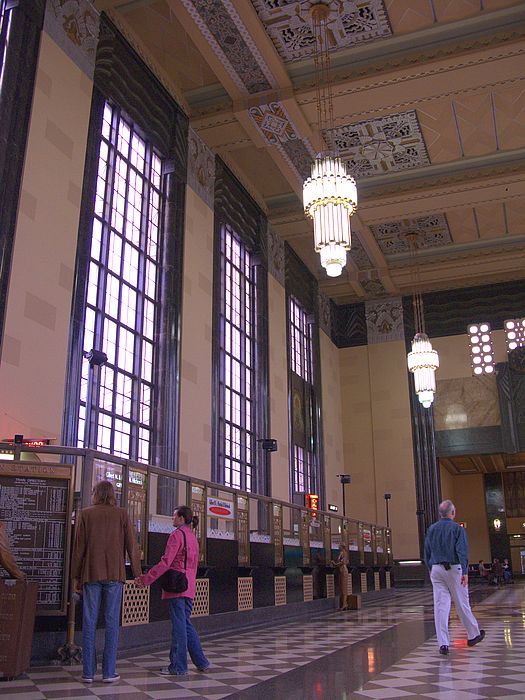 I loved the details. From the window at the ticket counter, 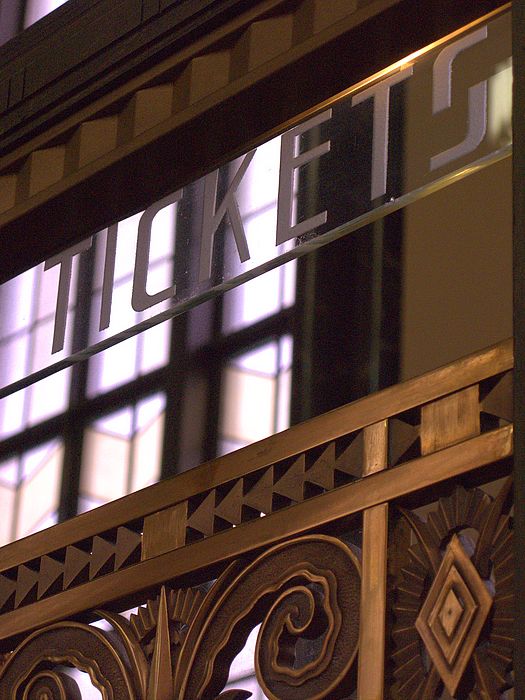 to the artwork far above on the ceilings. It was all just beautiful. 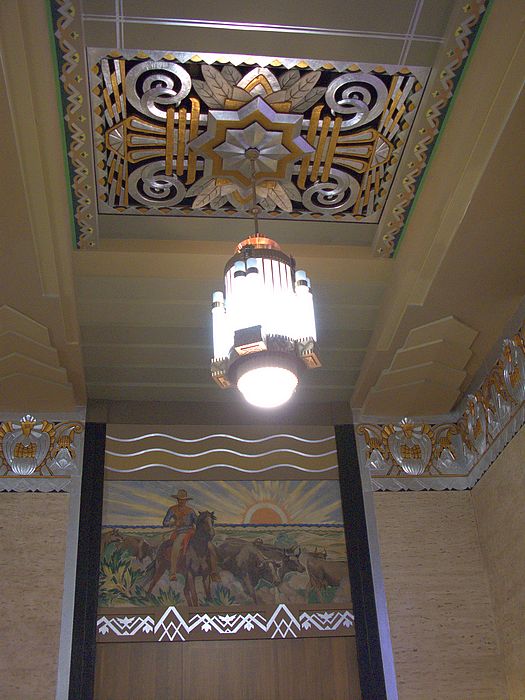 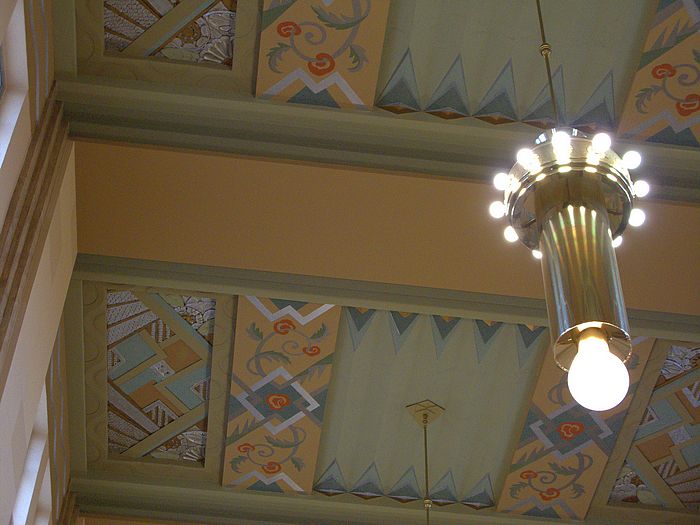 Union Station closed in 1971 after Congress established the National Railroad Passenger Corporation, now Amtrak, to handle all railroad passenger travel.  In 1995, a $22 million restoration of Union Station began.  Today, the station houses the Durham Museum and is a showcase for preserving and displaying the history of the United States’ western region.

Finally, we visited The Old Market, a neighborhood located in downtown Omaha that has many restaurants, art galleries and upscale shopping. It was once a warehouse district and market area, and still retains its brick paved streets from the turn of the century. For us, the most fascinating part of the Old Market, was The Old Market Passageway, a 3 story tall hallway connecting a street with an alley. 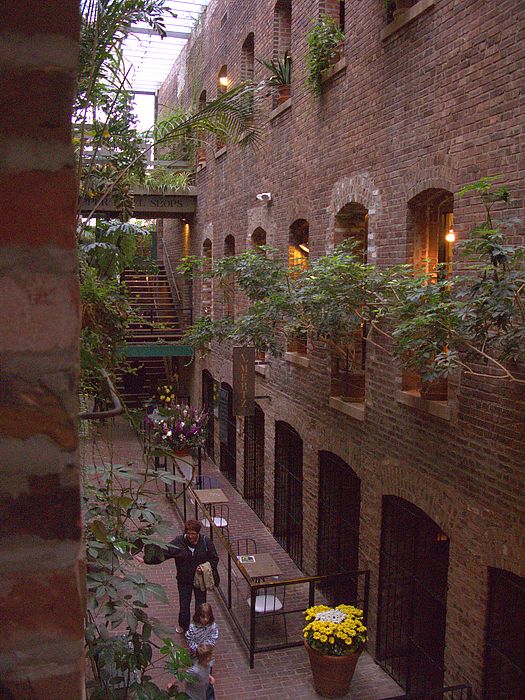 There are numerous shops and restaurants in the passageway. We loved the light streaming from the skylight above, 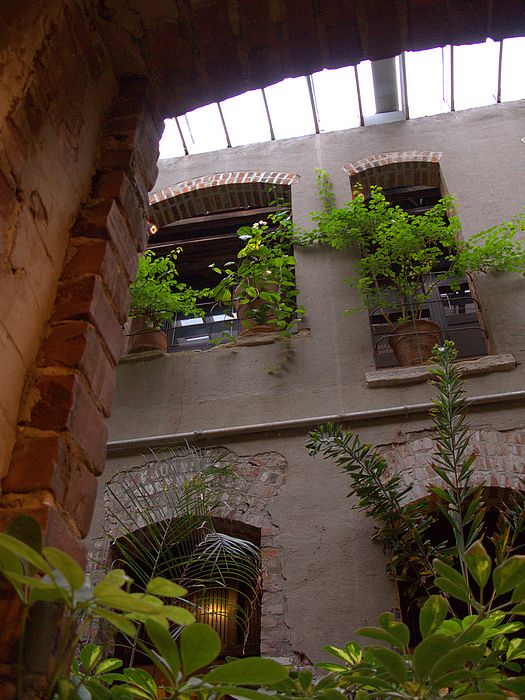 the texture of the old brick walls and pavement, 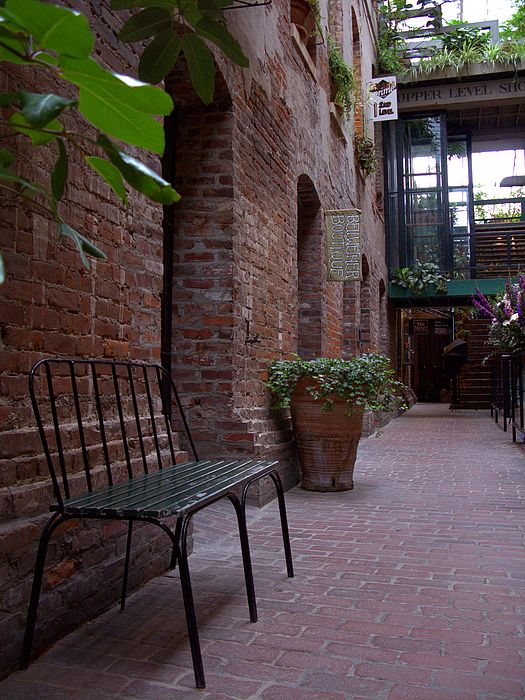 the light spilling out from the stores, 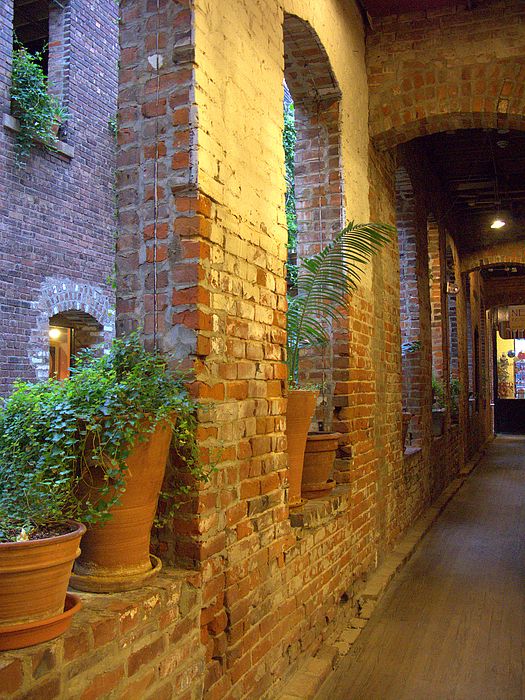 and all the lovely potted plants. 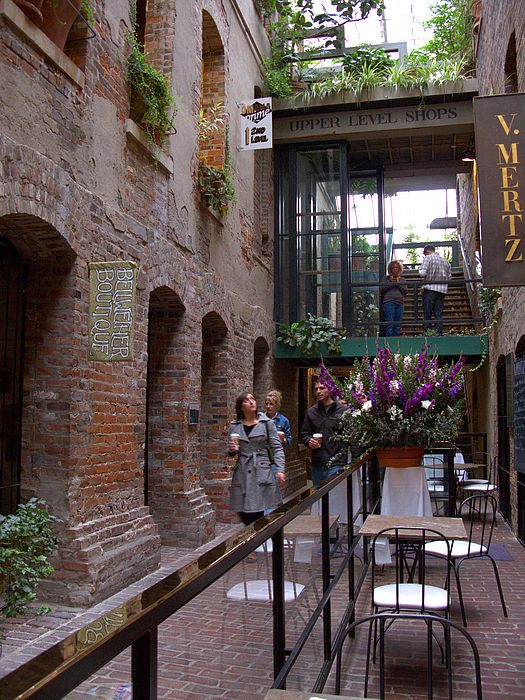 It was so much fun to photograph. 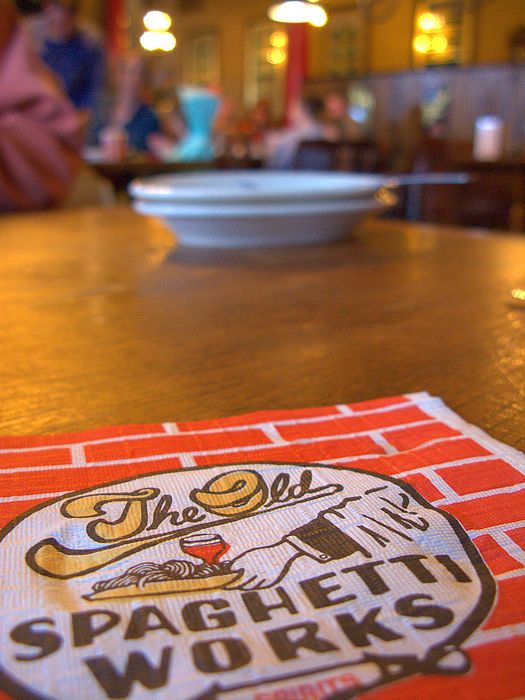 An Omaha institution for over thirty years, it is located in an old restored warehouse. I loved the décor, 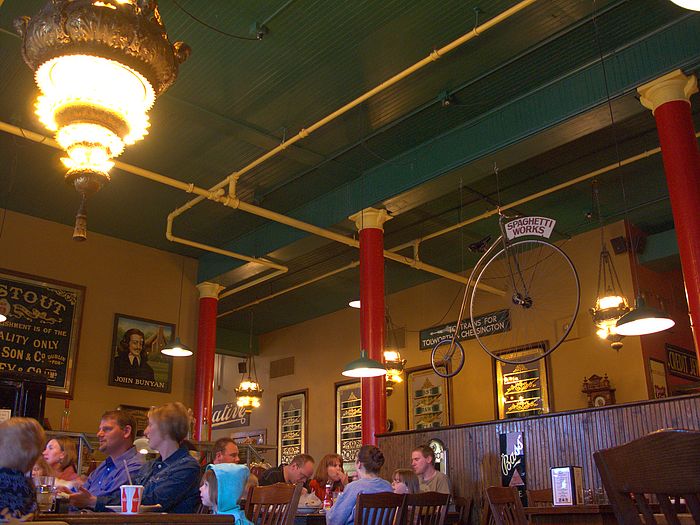 and the food was out of this world. I had the Alfredo Chicken and Mushroom Bake. 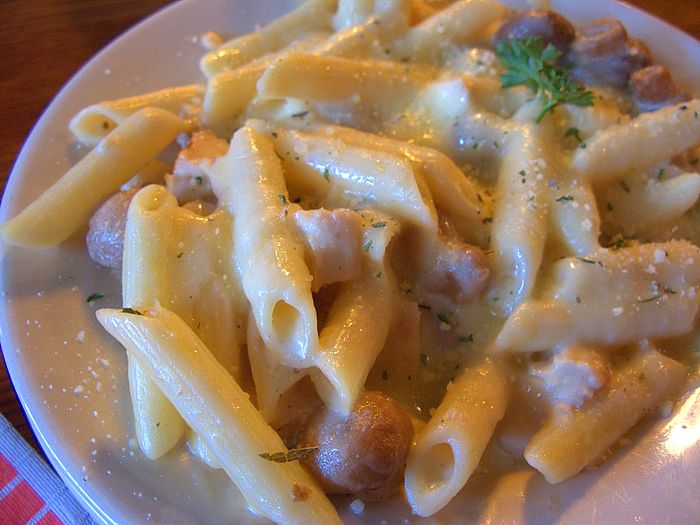 It was pasta with chicken and mushrooms in alfredo sauce, and smothered in provolone cheese.  I couldn’t finish it all, but it was soooo delish. Afterwards, we waddled out to the truck, and drove home.

We’ll go back to Omaha soon. We would like to see their new botanical garden.