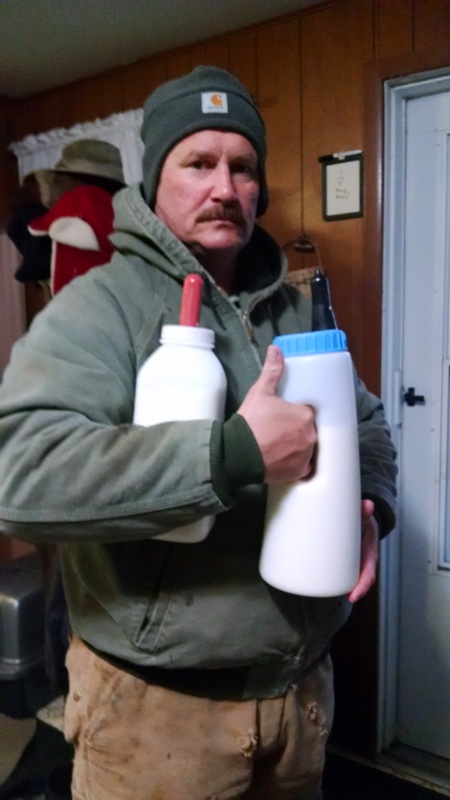 Last night we fed Daisy and Donald as usual, and for the first time ever, Donald completely finished his bottle..and then he wanted more!!  After feeding, we let them out of their pen to run around for a bit:

What a great feeling of relief to see Donald up and about!

And more good news:  At long last, it rained last night..about an inch.  It’s been so dry here – the last moisture we saw was snow and that was weeks ago. The soil has been so dry that a cloud of dust rises with every step. So it was a wonderful thing to hear rain on the roof last night. Now the gardens and grass will grow.

But wait….be careful what you wish for:

First thing this morning, Harland checked the cows. As expected, three of the girls waited for crappy weather to have their calves. Most of the time a cow will find a safe spot to have her calf, but not always. One of them was up and fine.  Of the other two cows, one of them had her calf in a puddle, while the other had hers in a pile of mud. Both calves were dead.

There’s an old expression: “If you have livestock, you’ll have deadstock.”  It’s a heartbreaking thing to find a dead animal on the farm, let alone two at once. Harland very often blames himself. He remarked that he should have gotten up in the night to check on them. Maybe he could have caught them in time, but then again, they could have had their calves after he went back to bed. The only sure fire way to lower calf mortality would be to pitch a tent in amongst them and watch them like a hawk. Not very practical though.

Besides the emotional loss of losing calves, there’s the monetary loss. Calves are now bringing about $600 a head at auction. That’s $1200 gone for us.

The only possible good that may come out of this crappy deal is Daisy and Donald. We now have two cows who have plenty of milk with no one to give it to. And we have two calves who have no moms.

Tonight we’ll start the bonding process matching a cow to each of the calves. It’s a difficult process and may not work, but we have to try. By nature, cows refuse to let any but their own calves nurse. They head-butt or kick other calves who try to take liberties with their udder. They can injure or kill a calf.

That’s where this useful contraption comes in: 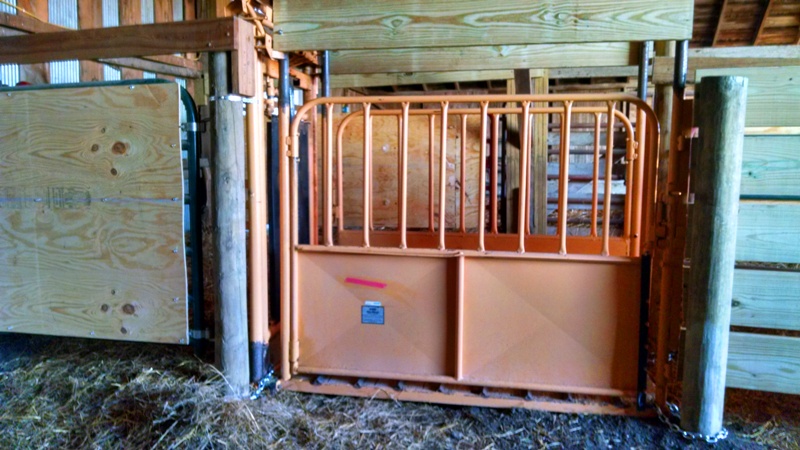 It’s called a squeeze chute. Oh how I love these. We have one of these in the barn near our house, and another at the farm up the road. Today, Harland will bring one of the cows and calves down to our place and put them in adjoining pens in the barn to get to know each other through a gate. Same thing will be done with the remaining cow and calf at the farm. With a gate between the cow and calf, they can sniff each other, but the cow can’t kill the calf. Both the calves had their bottles this morning, but by this evening, they’ll be hungry again – the perfect time for the next step in bonding.

Harland will drive the cow out of her pen and into the chute. Before she enters the shoot, we’ll swing these 2 black panels open. 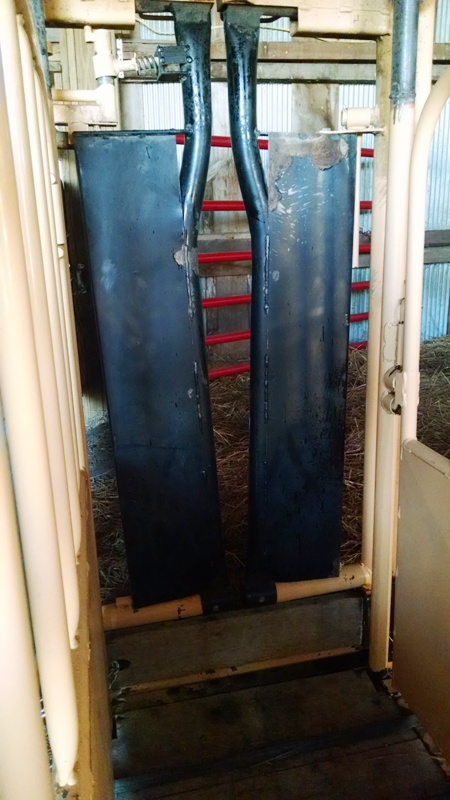 As she is running through the shoot and her head enters between the black panels, we’ll pull a lever closing the panels and she’ll be caught by the neck. It’s not painful but she’ll be really pissed off. Think 1000 pounds of really angry bovine. But it’s necessary for the safety of both us and the calf. To pacify and distract her, we’ll give her a pan of grain. Grain fixes everything.

While she’s eating her treat, we’ll take the lower part of one of the chute’s side panels down and introduce a calf to her udder. Both the calves are now several days old, so the newborn instinct to nurse from a cow may be gone. So we’ll have to teach them to latch onto the udder and to suck. This usually takes a lot of gentle manhandling and time. And even if/when the calf figures it out, the battle is not necessarily won. The cow needs to accept the calf. We’ll watch to see if she tries to kick the calf. The design of the chute will prevent her from kicking, but that doesn’t mean she won’t try.

After a good attempt tonight we’ll let the cows out of their chutes and return the cows and calves to the adjoining pens. We’ll do the whole process over again every morning and evening until the calf knows how to nurse, and the cows accept the calves. We’ll know they’ve bonded if the cow speaks in the gentle calf-speak that all new cow mothers use to their babies – low soft moos. If she uses that loving language with the calf we’ll know we have it made and both Daisy and Donald will have new Moms.

The whole process is time consuming and will probably take days if we are to succeed. But fortunately, spring planting hasn’t started yet, and we have some time to play with.

I’ll keep you up to date on how it goes.