Early Monday morning, Harland, Gerald, Ramona, Andrew (Harland’s nephew), and I gathered at the farm to start the day. Today was the day we would use our new cattle working facility. The veterinarian, Dr. B- was due to arrive at 9:30am. He would be giving the cows and calves their shots, castrating the bull calves, and preg-checking the cows. To do this, each animal would need to be driven into his squeeze chute he would bring along so that he could do his job in safety. Cattle are dangerous, and can cause injury or death so they must be restrained. According to the U.S. Centers for Disease Control and Prevention, one research study reported an average of 22 deaths a year by bovines, typically due to stomping or goring. They kill more than 5 times the number of people each year than sharks do.

Our first job Monday morning, was the drive the herd out of the lot an into our new sorting pens. From there, the cows would be sorted from the calves, with each group being put into their own pen. The cows and calves would be worked separately. We decided we would work the calves first, cutting 8 or 9 calves out of the pen, up the alley and into the crowding tub. From there, the gate on the tub would be closed in on the calves so they would go into the adjustable alley, lined up in a neat row. From there, Harland would open a gate at the end of the alley that would lead into Dr. B-‘s squeeze chute. One animal at a time would be let into the chute.  He would treat them in the chute, and then release them into a separate pen. Once we were done with the calves, the cows would be worked, one at a time. Our herd numbers in excess of 150 head. We had a long day ahead of us.

First up, we had to drive the herd into the sorting pens. We entered the lot, moved around behind the herd, and began to drive them towards the pen. The herd moved into a trot, then a gallop. Sixty tons of beef on the run makes a lot of dust and noise. They turned the corner out of the lot and the first of them entered the pens. All was going well. But just as fast as they went in, they made a U-Turn and came right back out, galloping at full speed. We jumped out of the way.

We sighed and headed back around the herd again, who by this time were right back where they started at the far end of the lot. We got them going again at a full gallop but as we neared the pens, 2 of the bulls decided to have a shoving match right in there in front of the pen entrance. We dodged around them trying to get out of their way, but the rest of the herd took advantage of the distraction, and turn tail back to the other end of the lot again. Well, crap. This didn’t bode well for the rest of the day.

Harland managed somehow to sort off the 4 bulls into a pen beyond the far end of the lot and out into a field far away from us. One of the cows, number 213, decided to go after Harland at this point, deliberately trying to hurt him. I didn’t witness this interaction, but when he rejoined us, he told us to remember the number 213, her eartag number, and that she would be going to the sale barn.

We lined up again behind the herd, determined this time to get them into the pens, no more nonsense.  We got them going, yelling at the top of our voices and running along behind them as they galloped towards the pens. The first of them entered the pens, with us right behind. Some of them attempted to leave, but we stood there yelling and waving our arms at them. Finally, finally, the last of them entered the pen. We hurriedly slammed the gate on them. Yeah!

While Harland, Gerald, and Andrew had been sorting the cows and calves, the vet had arrived. Once they were done, they helped the vet back his squeeze chute into place at the end of our adjustable alley, and chain it to the alley. We were ready to begin. Each of us had a task to do working the calves..

Gerald and Ramona were to cut off 8 or 9 calves from the group and drive them up the alley, into the tub, and from the tub into the adjustable alley. My job was to close the gate behind each group once they entered to the adjustable alley to keep them from backing out. Harland would be positioned at the other end of the alley near the chute. He would open a gate allowing one animal at a time into the chute. He would also replace any missing eartags, and generally help Dr. B-.  Andrew had the job of holding the tails of the bull calves out of the way  to allow the vet easy access to the important parts that had to be castrated.

Gerald brought up the first group of calves, 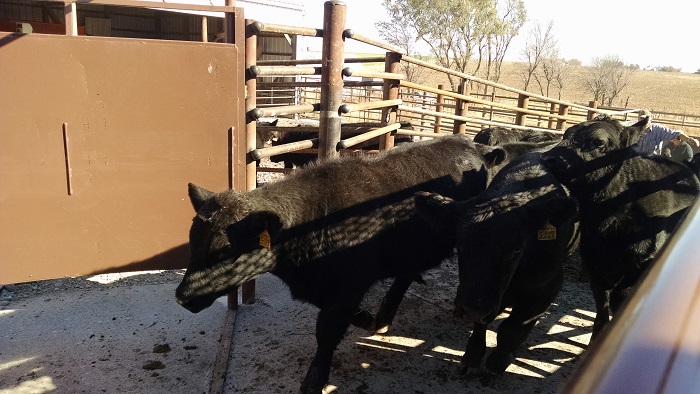 got them into the tub, 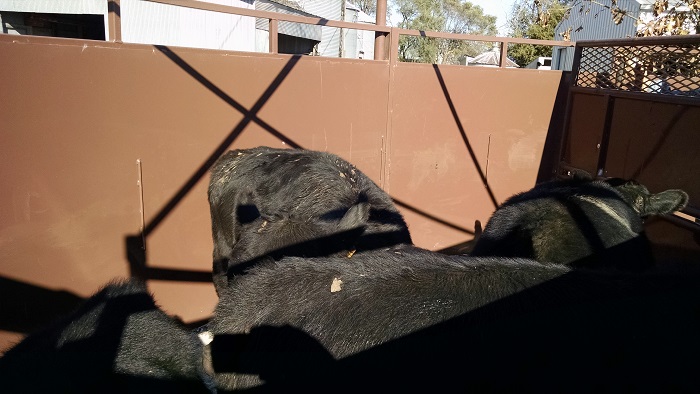 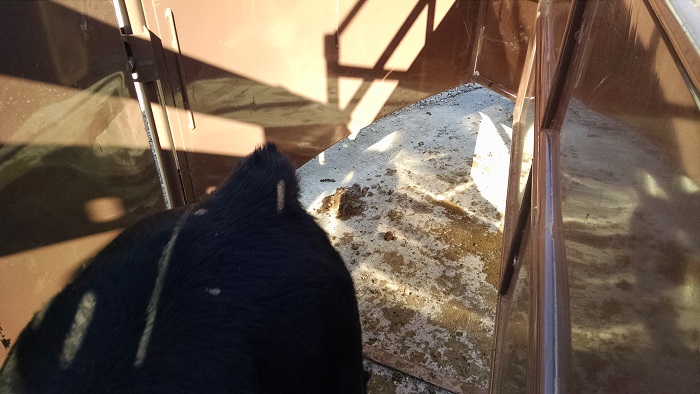 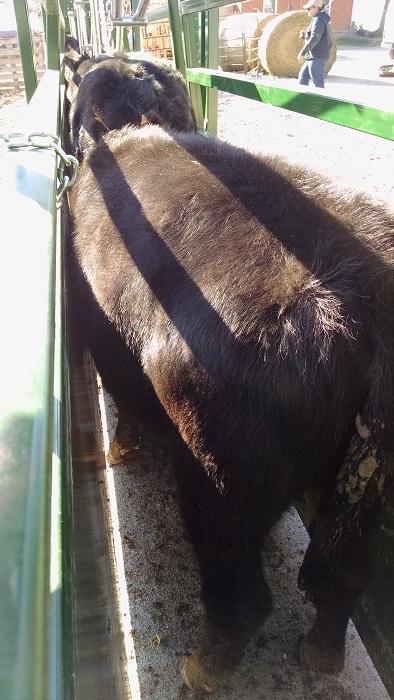 and I shut the gate behind them. Harland let one by one into the chute, they were taken care of and release into an empty pen. And so it went on that way, group by group. Gerald came up to me at one point singing the praises of the tub, how much he liked the fact that he could get them into the alley without being in the same space with them and getting kicked. The calves, as calves normally do in an alley, tried and tried to turn around or climb out – all to no avail. Things ran along smoothly. Until we heard a crash –

I looked out towards the adjustable alley. One of the panels had fallen away from the alley, allowing 4 calves to escape into the pen with the worked calves. The I raced over along with Harland and put the panel back up. The pins that were supposed to hold the panel in place had slipped out allowing the panel to drop away. I went up and down the length of the alley and saw that most of the pins were working their way out. I put them back in. There was a knob at the end of the pin that supposed to prevent this from happening, but it was inadequate for the job. The crappy part of this was there were now 4 UN-worked calves mixed in with the Worked calves. All of them are black from head to toe. Harland got a look at them as they escaped out of the alley and said he thought he saw 2 bull calves. There was no way to find the two females, so they never got their shots. But at least we could find and sort off the 2 bull calves by looking at their, well, you know. We band our calves to castrate them so we all gathered round to look for the 2 bull calves without bands. We finally found them, sorted them off, ran them through the alley again, and got them taken care of.

From then on, I checked all the pins in the alley after each group of calves was run through. Soon, it was time for lunch. Harland and Gerald pulled out their drills and began drilling holes into the end of the pins and inserting cotter keys into the pins to prevent them from coming out again. Meanwhile, I went to town for sandwiches.

By the time I returned, the pins had all been fixed, so we ate lunch and then got back to work. Soon, the calves were all done, and it was time to start on the cows. We changed up our jobs a bit. Gerald needed help getting the cows cut out and moved into the tub, so Andrew helped him with that job. Harland had decided to keep the heifers separate from the cows after they were worked, rather than turn them back in with the cows, so we wouldn’t have to sort them off in January to take them to our place for calving. So I got out of gate duty, to be replaced by Ramona, and was promoted to driving each heifer as she left the chute into a separate pen. This meant I could be up close to the chute for preg checking, which I’ve always wanted to see, but never have.

Preg checking is when the vet determines if the cow is pregnant, and if so, how far along she is. To do this, he puts on a long plastic glove, inserts his arm into the cows rectum, and feels for the calf through the intestinal wall. If he doesn’t feel a calf, she is “open”, or not pregnant. If he locates the calf but it is very small, she is “late”, or will be calving later than the rest of the cows, which usually calve within a 30 day period in March.

Dr. B – was so fast at preg checking. Each one didn’t take him more than a few seconds. It was amazing. 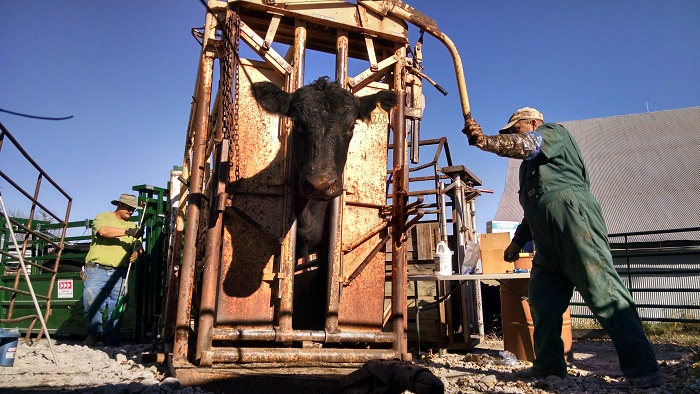 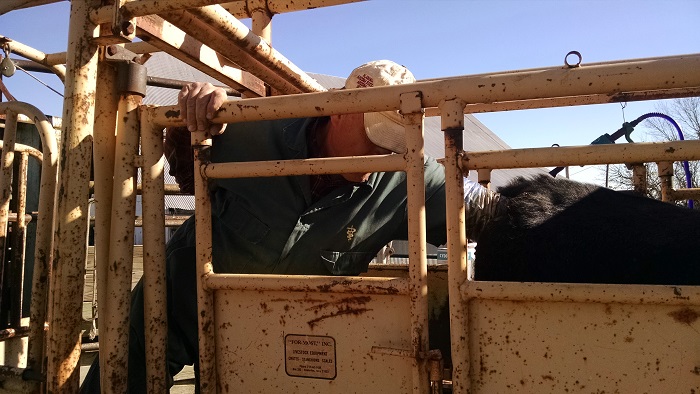 Ever seen preg checking? It’s so neat. You have got to watch this video I took. The first clip is of the calves being worked, and the rest of the video is all about the cows and preg checking:

So we got through all the cows without a mishap. It was late afternoon by the time we finished. Only a few of the cows were not pregnant. They will be going to the sale along with number 213, the homicidal cow. I know it sounds harsh to sell a cow because she’s not pregnant, but we can’t afford to carry cows over for a year, feeding and medicating them, when there is no return on them.

We gathered round after we were done to compare notes about the new facility, what worked, what didn’t. The general opinion was that it was a much much better system than we’d had before. It needs a little tweaking here and there, but overall it worked great and we’re quite pleased. It’s safer for both us and the herd. This is one of those projects that will last for years and years. In fact, we’ll probably use this system for the rest of our lives.

Glad you could come along on this project. Hope I wasn’t too boring, and maybe everyone learned something. I know I did.