Our next bird on our Squaw Creek tour is the Great Egret. 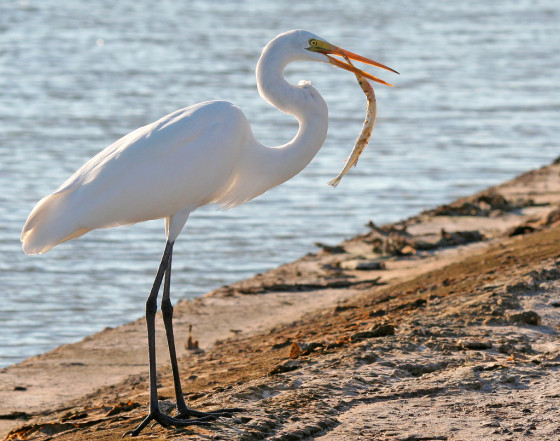 According to the Cornell Lab of Ornithology,

The elegant Great Egret is a dazzling sight in many a North American wetland. Slightly smaller and more svelte than a Great Blue Heron, these are still large birds with impressive wingspans. They hunt in classic heron fashion, standing immobile or wading through wetlands to capture fish with a deadly jab of their yellow bill. Great Egrets were hunted nearly to extinction for their plumes in the late nineteenth century, sparking conservation movements and some of the first laws to protect birds.

We don’t see these in our area very often, and when we do they are very skittish and hard to get close to. One of them that we saw a Squaw Creek last week was less reluctant to fly away at our approach. Some of his wing feathers were hanging down lower than they should be. We wondered if he had been injured in some way.

Later after I took this video, he flew away, so whatever may be wrong with his wing, it doesn’t prevent him from flying.

Up next, more birds from our trip to Squaw Creek. Check back soon!