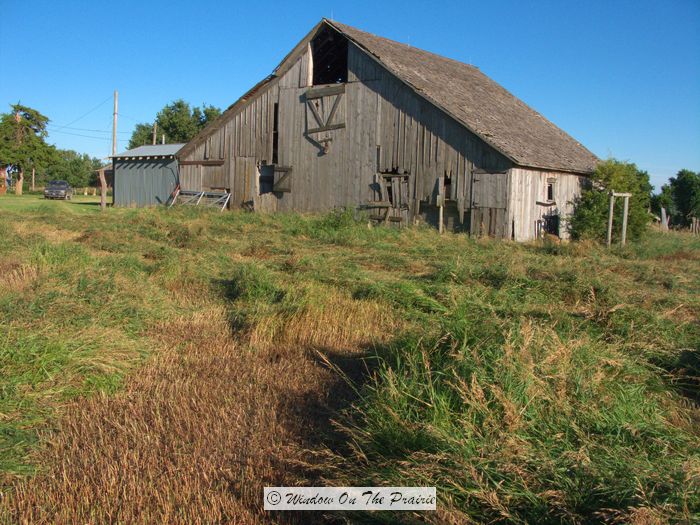 You may have noticed the old barn in the pics from yesterday’s post about mowing hay. I don’t know very much about this barn because it belongs to our neighbor, whose land we farm, but here’s what I was able to find out about it. It was probably built in the late 1800s. It served as a place to store hay, house the farm animals such as the draft horses who worked the farm, dairy cattle, chickens, and the usual barn cats. The family farmed with horses until the 1950s, and then they went mechanical: tractors, combines, etc. Then it was used for the dairy cows until the mid 1980s when they stopped dairying. Since then, it has sat empty and unused, slowly succumbing to the weather and time. The roof of cedar shake shingles is more hole than roof now. 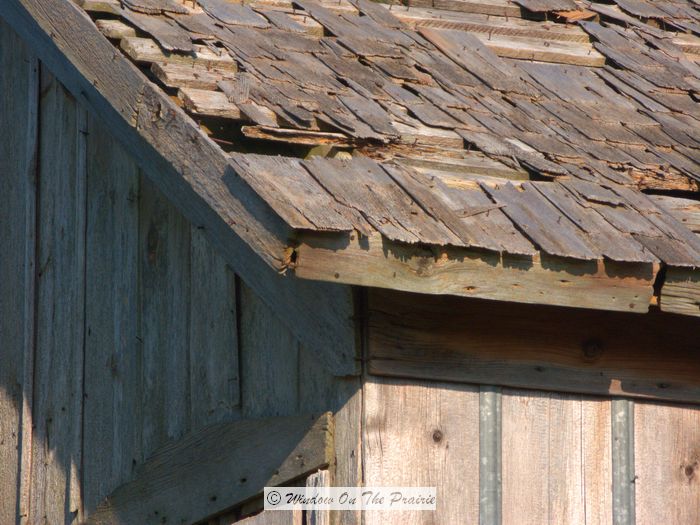 Doors hang crooked on their hinges. 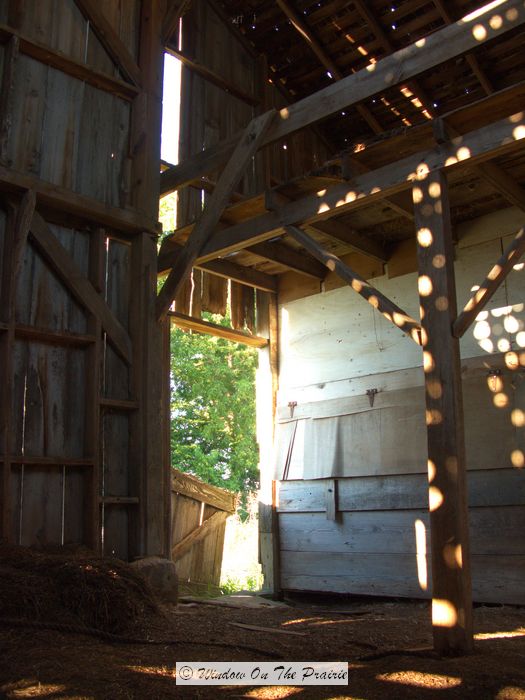 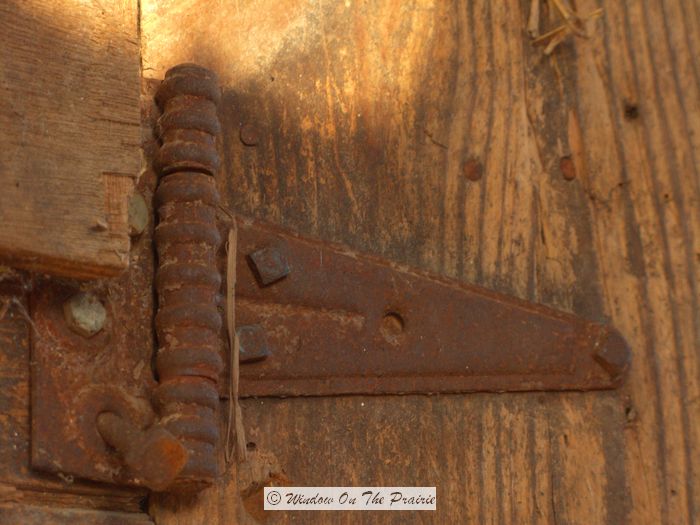 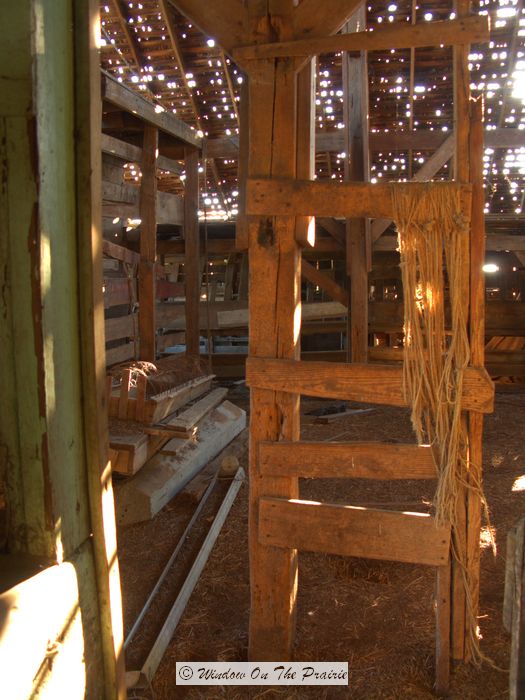 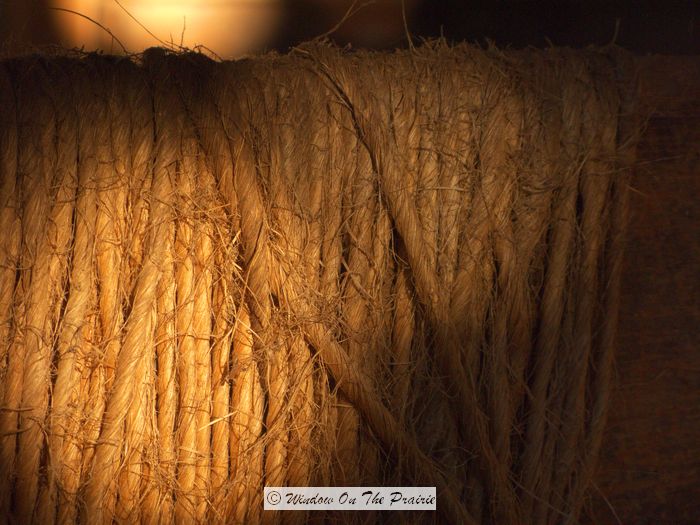 A gate leans against the wall. 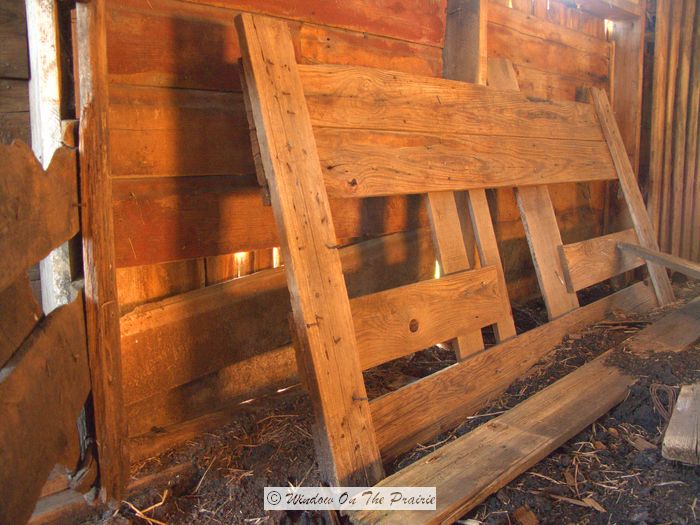 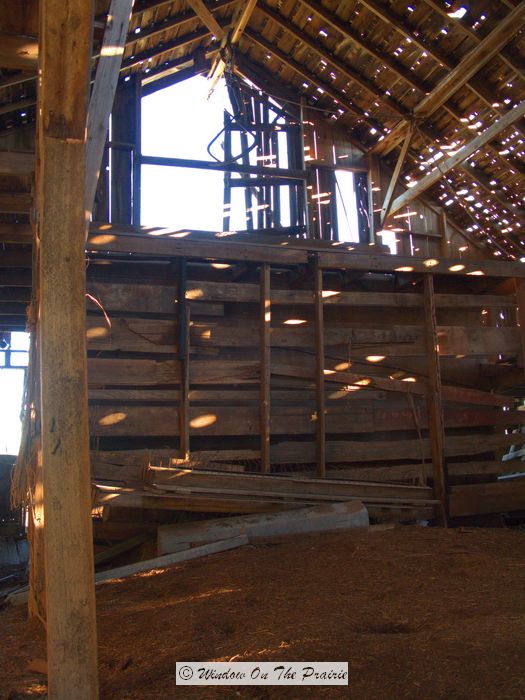 There is a musty smell and an eerie quiet. 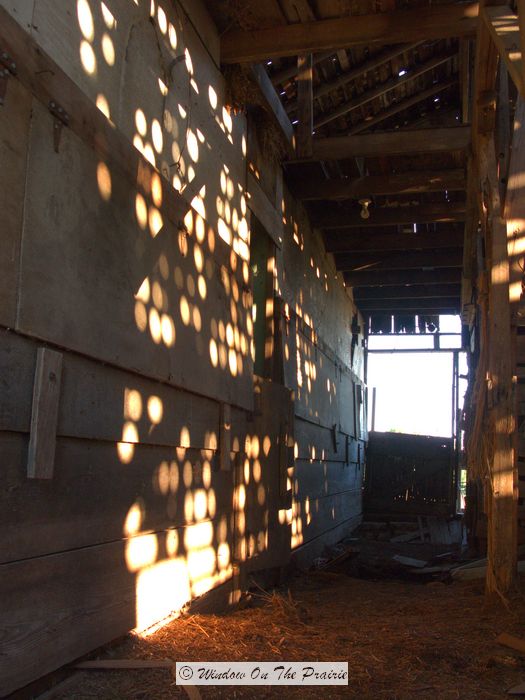 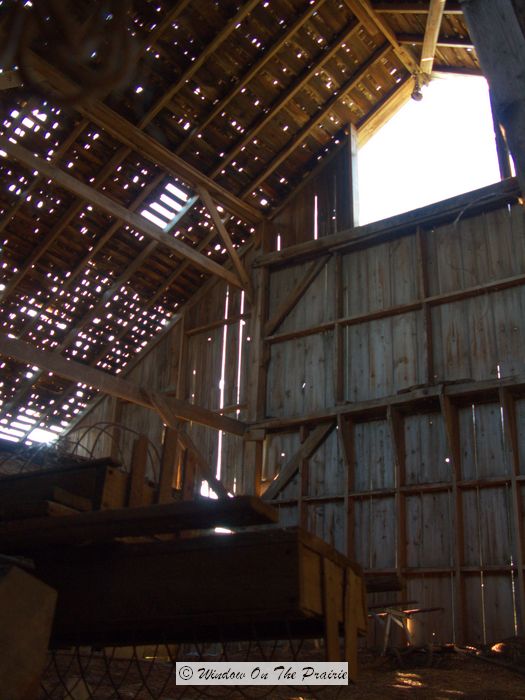 I can imagine a time when it was filled with the sound of horses eating their feed, 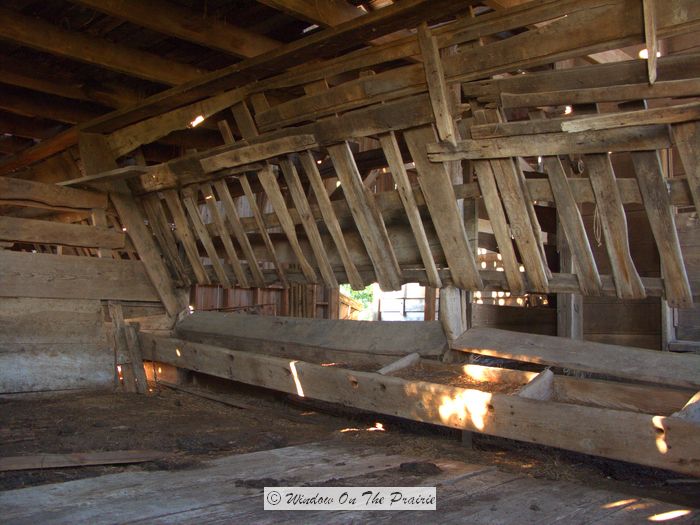 cows mooing to be milked, and children playing in the loft. The horses would have been harnessed and taken out into the fields in the morning, and returned at night to be unharnessed, fed, watered, and left in their stalls for the night to sleep. 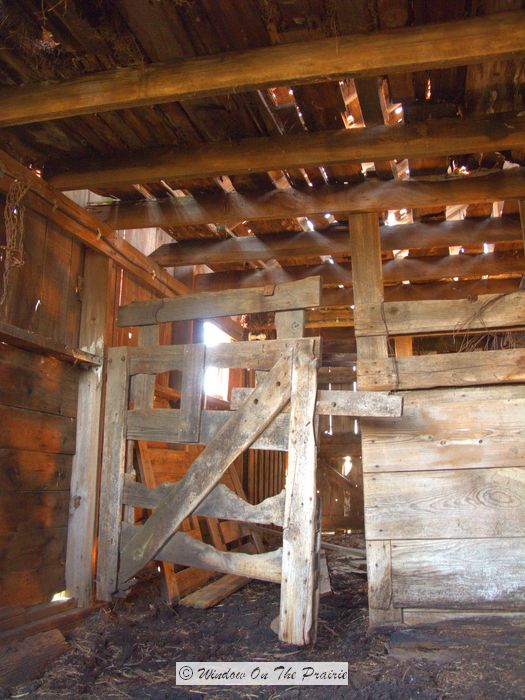 The dairy cows would have been brought into the barn from the field twice daily to be milked. Cats had their kittens in the straw. Children would have done part of their chores here, cleaning out stalls, and feeding the animals. They also would have played here, or just sat in the loft on rainy days dreaming. During haymaking time, there would have been a bustle of activity around the barn. Hay was cut and loaded onto horse drawn wagons, 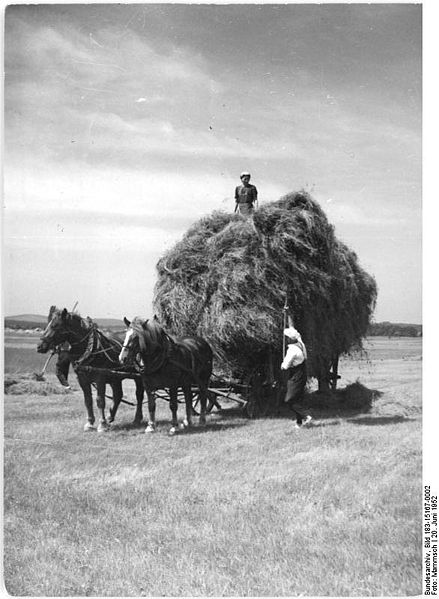 and then the wagons would have pulled up under the large hay door. 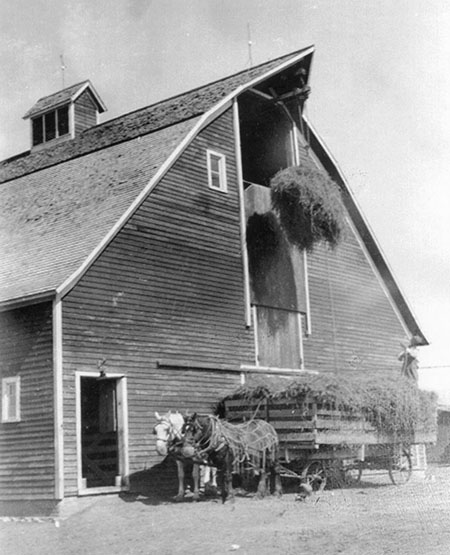 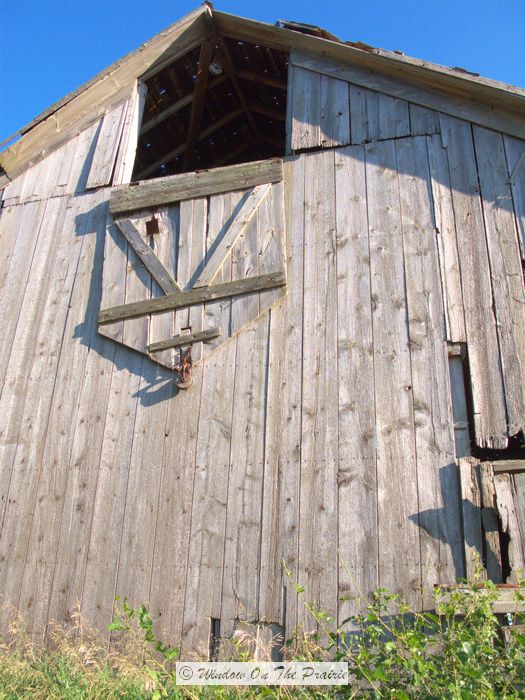 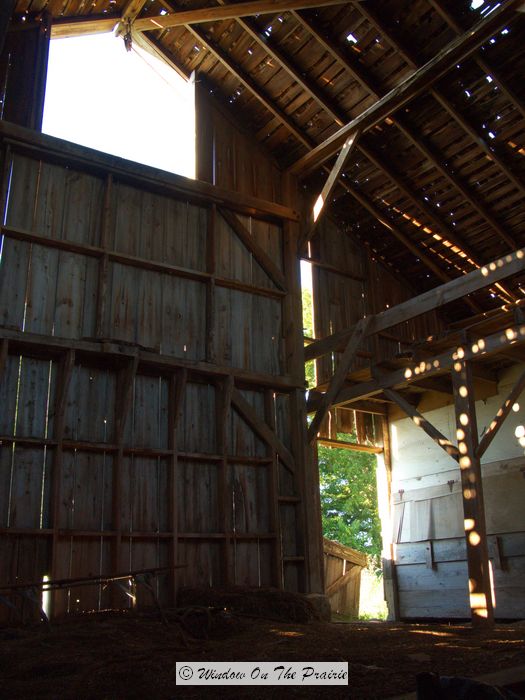 The hay would have been loaded into the barn with a large hay hook at the end of a hemp rope on a pulley that removed the hay from the wagons, hoisted it up through the door, and into the loft. This hay would have been used all winter for animal feed. The rope and pulley are still there in the barn. 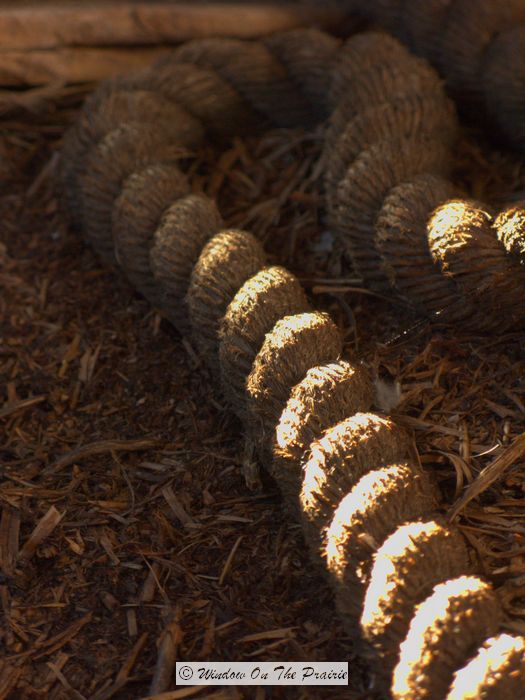 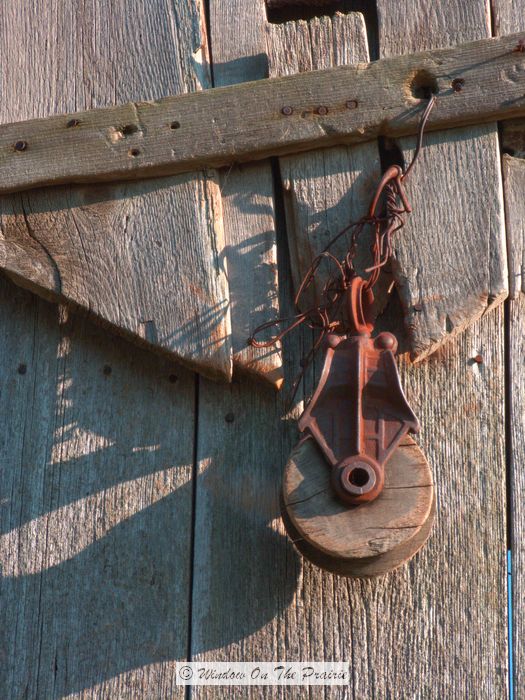 But many years have passed since hay was cut and stored this way. And this barn has not seen any activity for over a quarter century. I’ve seen many barns like this one over the years- quiet and unused, and it seems sad.

So I feel all the more glad when I see some of them still in use today- old, but still valued and cared for.

Have you ever seen an old barn, and wondered about its history?