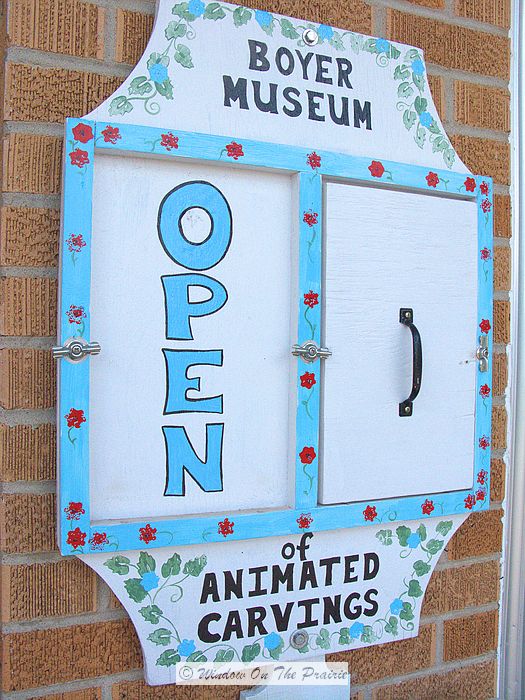 The last stop (whew!) on our weekend road trip around north-central Kansas was the Paul Boyer Museum of Animated Carvings in Belleville. Born in 1930, Paul began carving animals, people, and vehicles in about 1950. With no formal education in art or engineering, and only a 4th grade education, he began to animate his carvings using complex systems of pulleys, gears, small electric motors, and wire mechanisms. Paul has no blueprints for any of his carvings. He forms his ideas in his head, and then carries them out: hand-carving figures from wood, painting them, 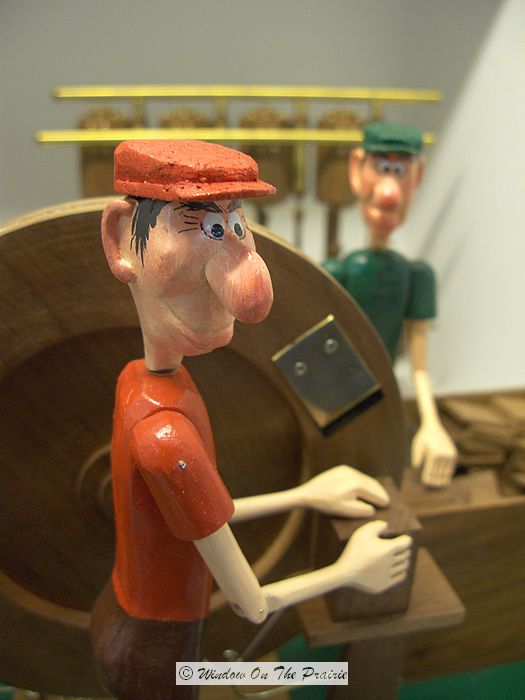 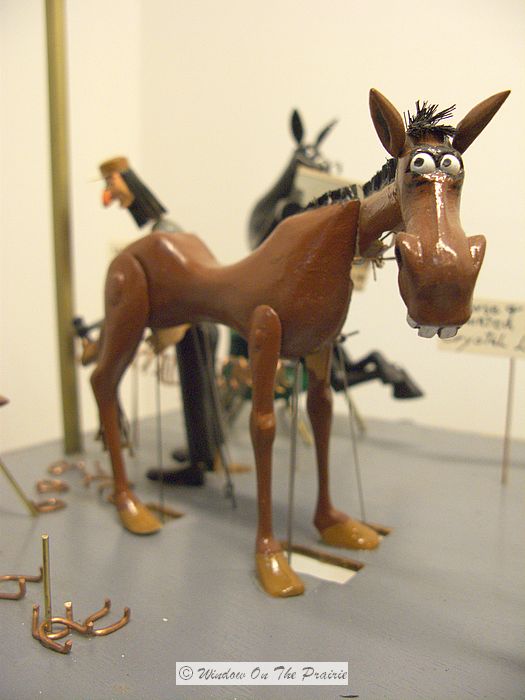 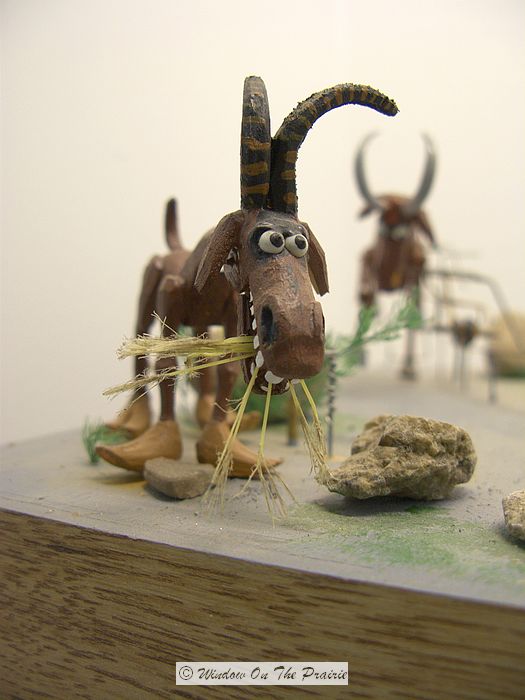 and then assembling the intricate systems that make the carvings come to life.

Here’s a horse and rider, 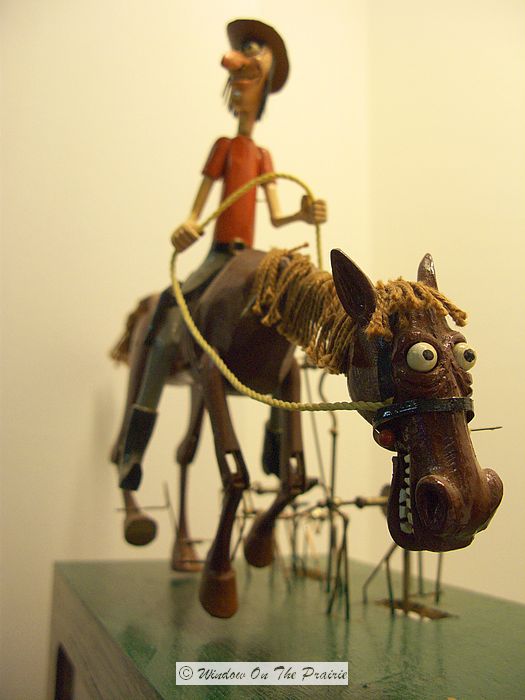 and here they are in action. 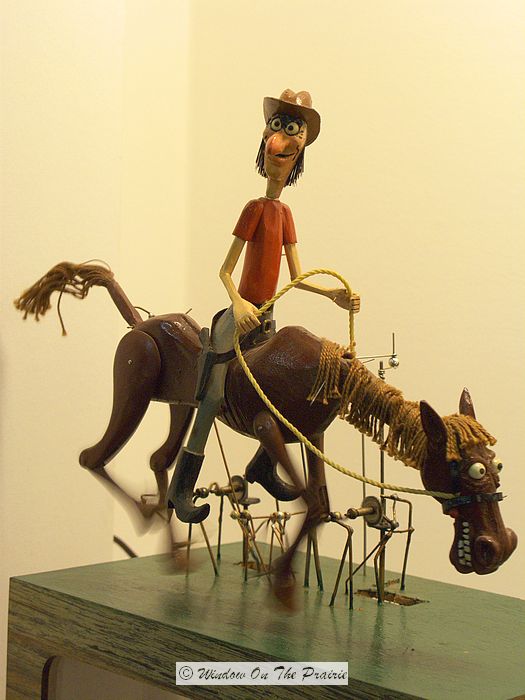 Here, a guy tries out his hand-pedaled flying machine: 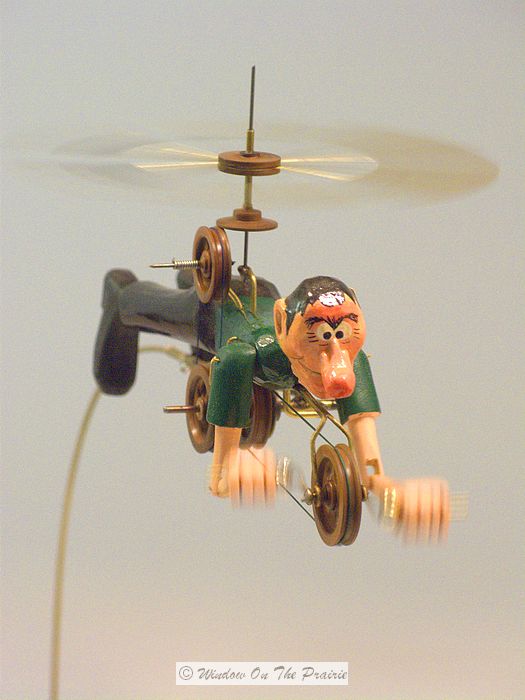 Another guy has set up a needlessly complicated system to fan himself: 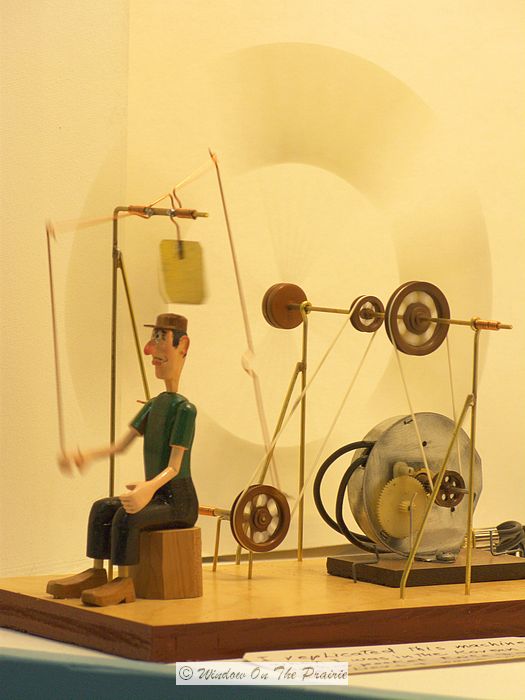 Here’s a couple out for a horse and buggy ride: 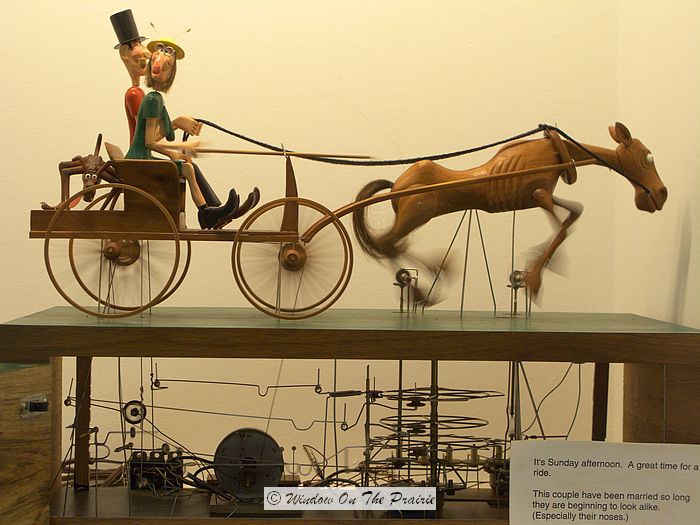 Below them you can see the working mechnism. 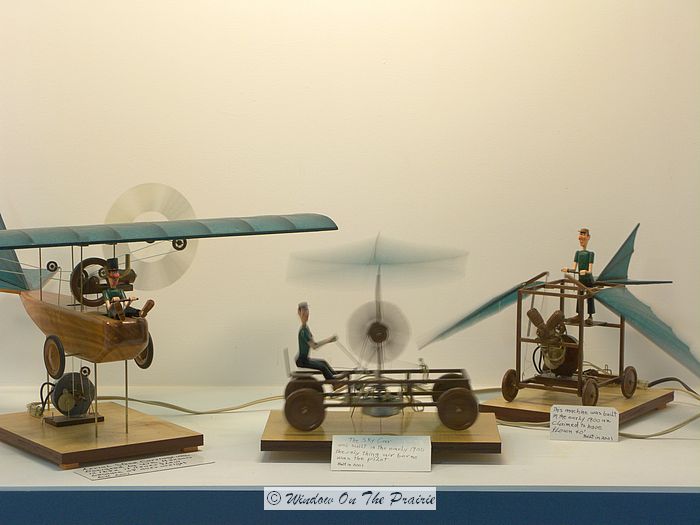 And here’s one of my favorites: a mother vulture with a string in her beak attached to a swing, 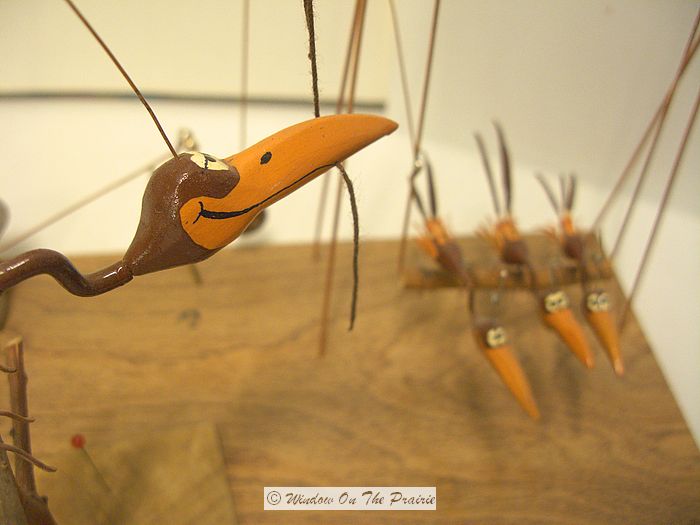 upon which her youngsters sit, 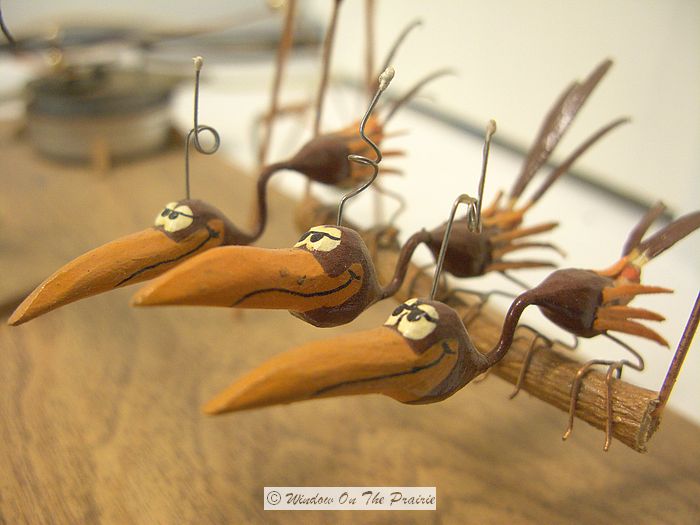 and when the mother pulls on the string, they youngsters go for a ride on the swing. 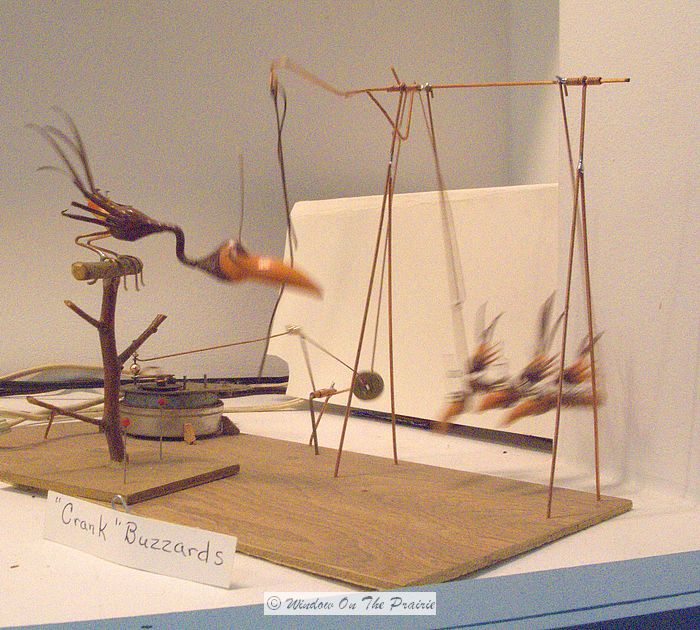 A farrier’s shop is operated with horsepower – literally: 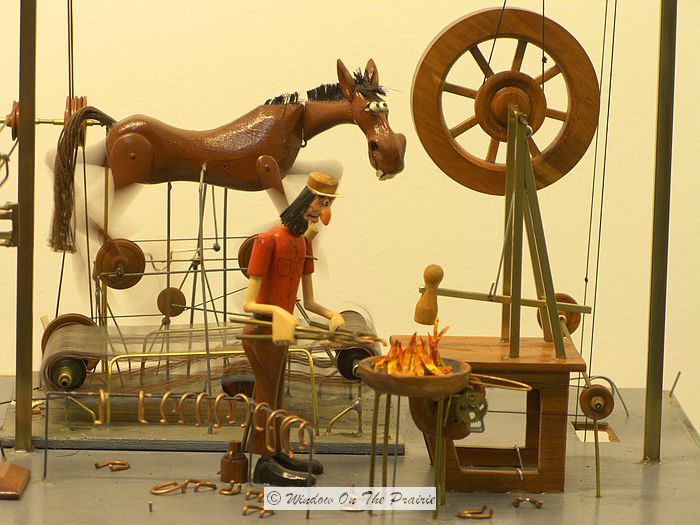 a horse runs on a treadmill connected to ropes and pulleys which in turn operates all the equipment in the shop. 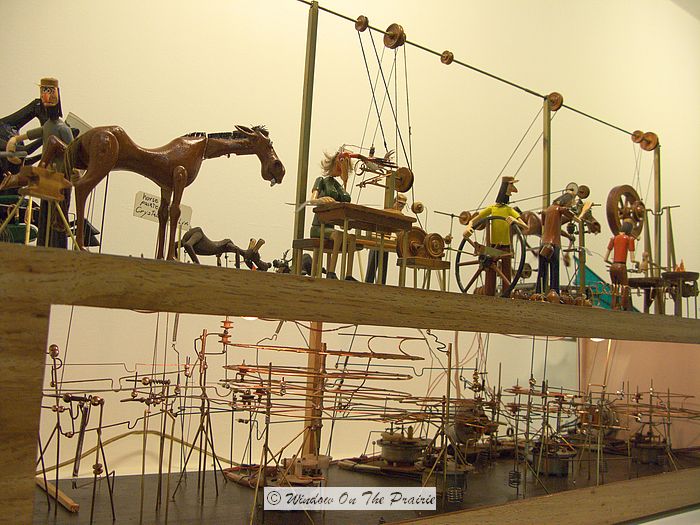 And you can see the working mechanism below the shop too.

This is my very favorite. Two billy goats repeatedly run at each other, 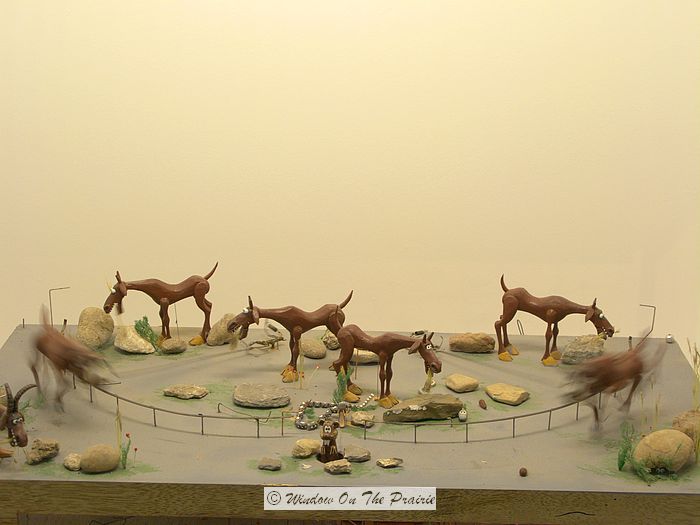 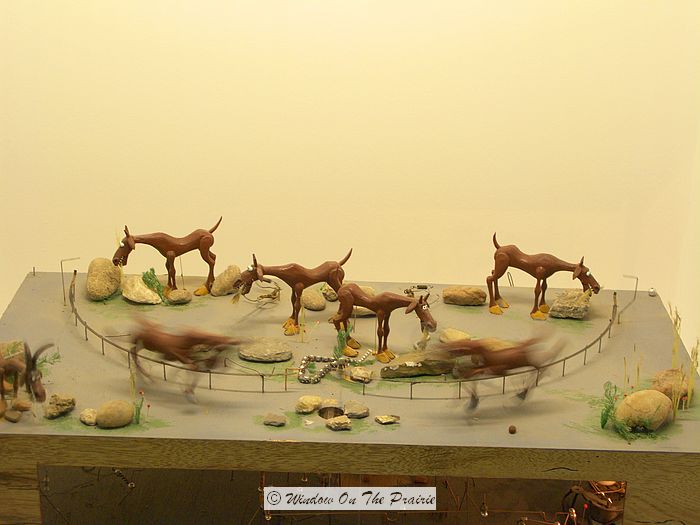 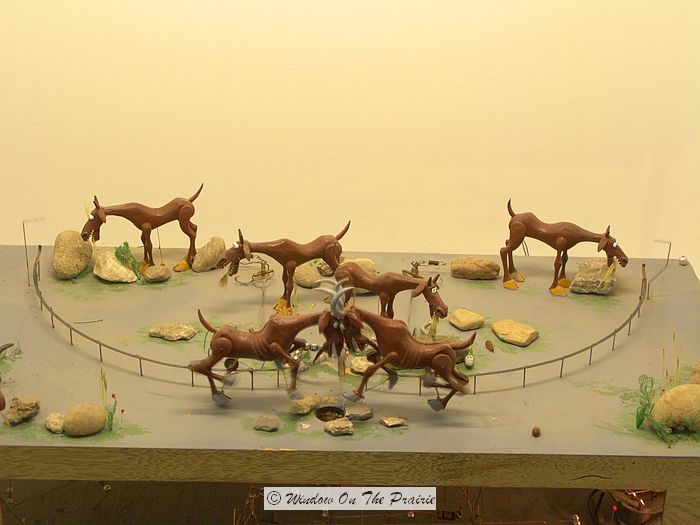 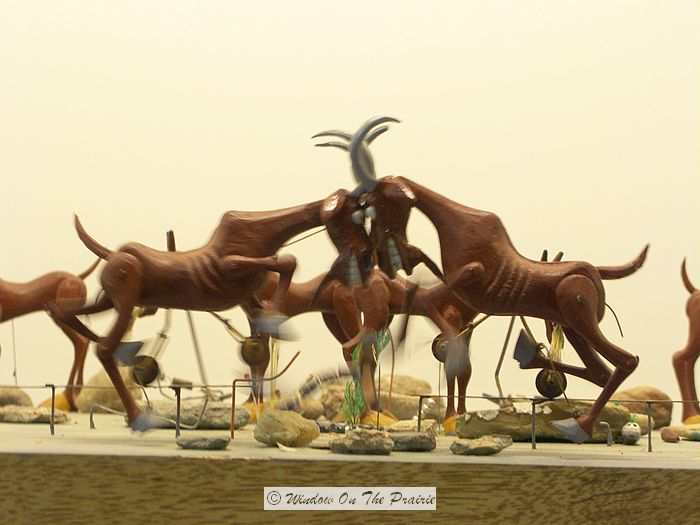 Then they back away from each other they same way they came, only to run at each other all over again.

There are 60 displays assembled in the museum in Belleville where visitors can press a button on each display to see the animations come to life. Ann and Candy, Paul’s daughters, are on hand to answer any questions you may have about their dad and his creations.  Paul’s health in recent years has frustrated his ability to work as much as he would like, but his ever-active imagination is at work dreaming up ideas for more carvings to add to his collection. His wish is that his artistry will continue to be available to the public for their enjoyment for many years to come. The museum’s phone number is (785)527-5884. Give Ann and Candy a call – they’ll be glad to show you around the museum.

After being away for a few days, we came home to a vegetable garden in need of attention. We pulled the onions, and picked lots of cucumbers. And so I made roast chicken with Italian bread and onion stuffing, and also made refrigerator pickles….. Those posts are coming later this week. 🙂