NOTE: Sorry for my absence over the last few days. Harland caught the flu earlier in the week, and after a few days I foolishly bragged that I hadn’t caught it yet due to my superior female immune system. I promptly got ill about 4 hours later.  But we are both back upright again today and feeling better. Kitty is vastly relieved. With typical cat-like thinking, she was worried about who was going to feed her in the event we both didn’t make it. Gee thanks Kitty.

On the second day of our Christmas (getaway from the cold midwest) vacation, we visited Natural Falls State Park in Oklahoma. The park has a waterfall with a 77 foot drop that we were anxious to see. We stopped at the park office to pay the modest $4 fee, and ask for directions to the falls. The helpful park worker gave me a park map and pointed out the best vantage point from which to view the falls.

But then she announced that the water to the falls was currently being diverted due to some utility work being done – meaning there was no waterfall to see that day.

I’m sure even Harland, who was in the bathroom at the time, heard me.

“But the trail to the falls and through the woods is scenic…”, the helpful park guide assured me.

After Harland got out of the bathroom I broke the news to him.

Lovely pictures of a scenic waterfall caught expertly with camera set to time exposure on a tripod evaporated like mist on the wind.

But we decided to go walk the trail anyway to see what there was to see. A kind of “let’s go make a silk purse out of a sow’s ear” attitude that sometimes serves us well. And it was a nice walk through the woods down to the base of the dry waterfall. The weather was good, the sun shining, and we pretty much had the place to ourselves. And as we neared the base, we saw that there was some water after all. 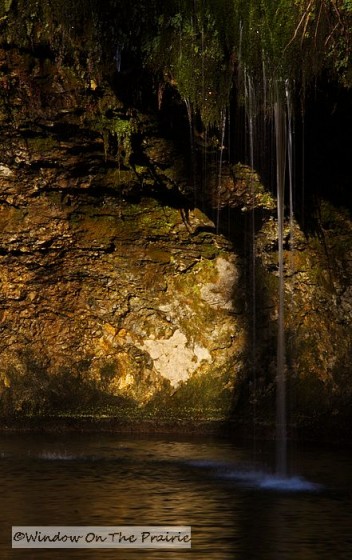 Springs seeping out of the cliff face made trickling 10 foot small waterfalls. Harland set up his tripod and proceeded to click away making 30 second exposures to make the water blur. I don’t have a tripod, but Harland showed me how to set my camera for a delayed 2 second exposure and I got some decent shots doing that. 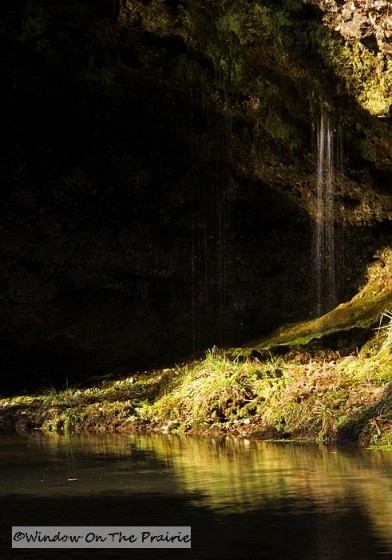 It did require that I put the camera on a solid surface though, and so I used the raised platform near the base of the waterfall, which meant I had to belly flop down on the ground to peer into the camera. But it worked and was worth the hassle. 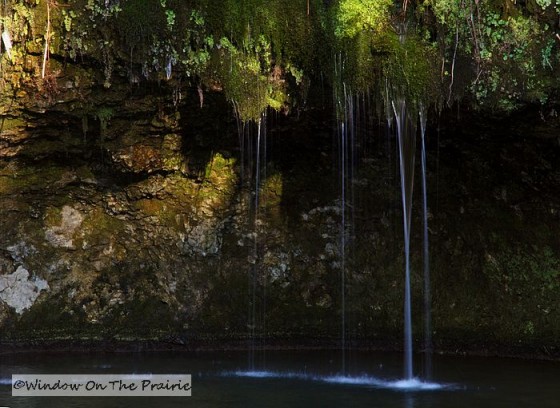 For more information about the waterfall including pictures of it flowing at full strength, click here.

——-> UP NEXT:  Armadillos at Holla Bend National Wildlife Refuge in Arkansas. 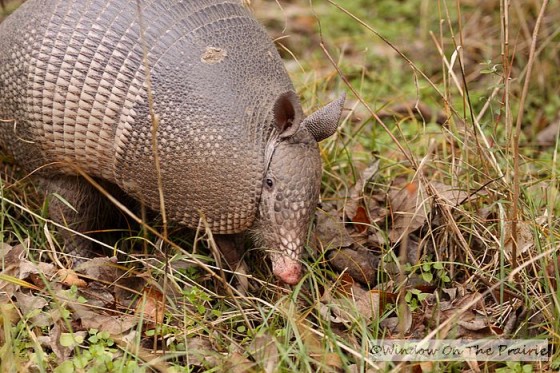