This story is NOT for the weak of heart.

Soooo… about a week ago, we drove up to northwest Nebraska to visit the Toadstool Geologic Park, a “badlands” area. It’s about a 10 – 12 hour drive, but out here on the prairie we’re used to doing a lot of driving. So off we went. We started out Friday night after I got home from work, stayed overnight in Lincoln, NE, and then were off again Saturday morning. We drove all day and finally got to the Park as the sun was getting ready to set.

There is a little campground there, and I set off to pay for our camp spot as Harland hurriedly gathered his camera equipment together to take some pics of the park in the setting sun. As I walked along in my t-shirt and shorts (it was a really hot day) I noticed 2 campers dressed in long pants, long sleeve shirts and wide brimmed hats pulled down nearly to their shoulders.

“Wow, how weird is that?” I thought.  But, hey, you see all kinds of strange people on the road. I skipped merrily up to the little kiosk to pay our campsite fee. I pulled out a little form to fill out and – wait – something is biting down there. I looked down at my bare legs. There were about a half dozen mosquitoes on EACH of my legs feasting for all they were worth! I swatted them away and continued to fill out the form.

“Ow OW!”  I looked down – they were back! I grabbed the unfinished form, ran back to our truck and jumped inside.

“Harland, this place is infested with mosquitoes!”  He said he had figured that out and was putting on Deet and a jacket as he took off into the park to take pics. I got back out of the truck and ran back to the kiosk, mosquitoes chasing me in a cloud as I ran along. When I stopped to drop off the form they descended all over me and I swatted at myself as I slipped the form into the slot and then ran back to the truck where I sat there panting and weighing my options. I didn’t drive 12 hours just to sit in a truck, darn-it.

So I got back out and went through my luggage for a pair of pants. Then I looked for a jacket, but all we had were heavy coats.

“Well, I’ll just move really fast as I take my pics and it won’t be so bad,” I thought.

I didn’t use Deet as we are trying for a family and I didn’t think it was a good idea to use bug spray. So I set off in t-shirt, jeans and hat, camera in hand. I headed up into the rocky hills and as long as I was moving the blood-suckers couldn’t catch me, but as soon as I would stop to compose, frame, and take a picture, they would be all up and down my arms and in my face. 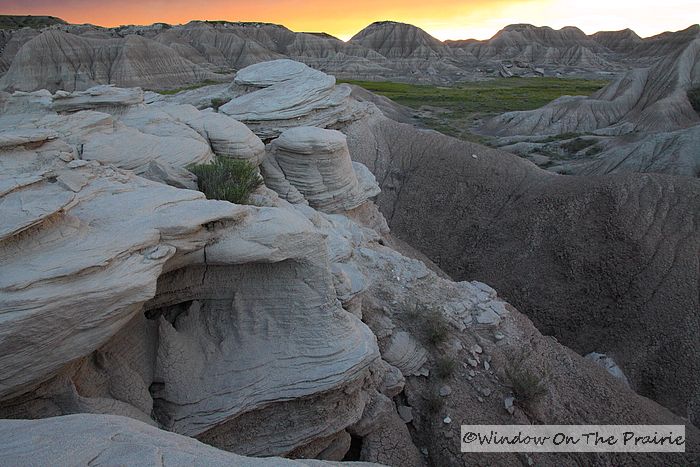 As soon as I would finish taking a picture, I would go after them.   OWWWW!!  *SLAP*SWAT*SLAP SLAP*

But I forged on. No mere insects were going to keep me from capturing that glorious sunset against that strange otherworldly landscape.

A storm had just passed through and another one was skirting off to the south of us as the sun slipped beneath the dark rainclouds. 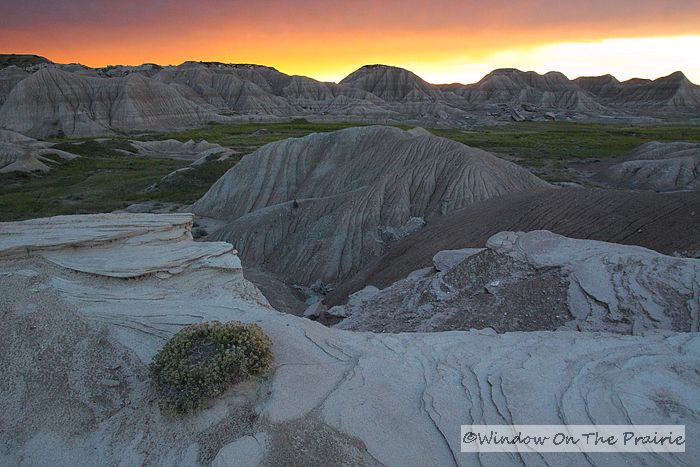 Oh neato, look how the sun is lighting up just the tips of those hills off to the east. 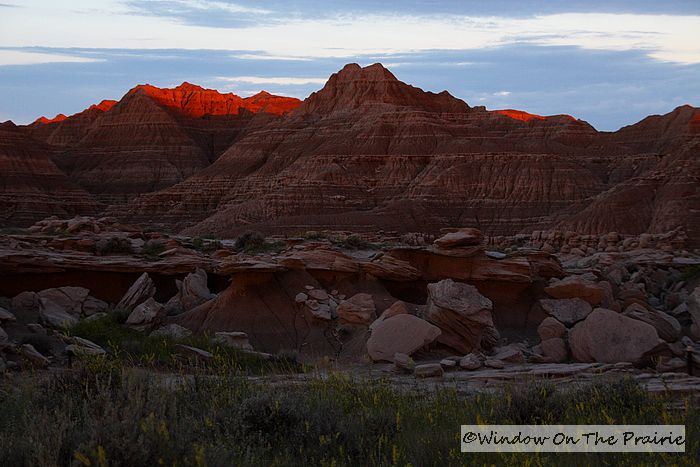 I began to notice with some concern that my followers were increasing in number, like I was the first and only warm blooded creature they had ever seen.

But who can leave a landscape like this? What a treasure! 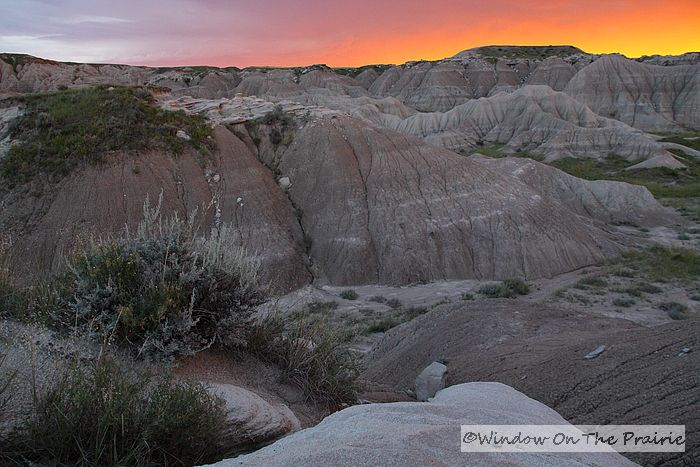 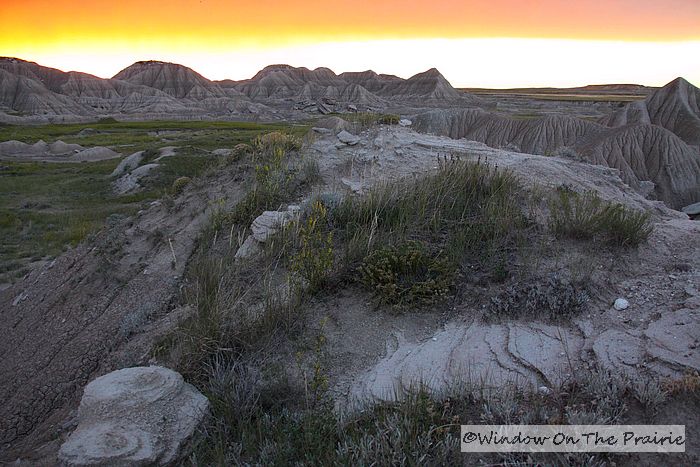 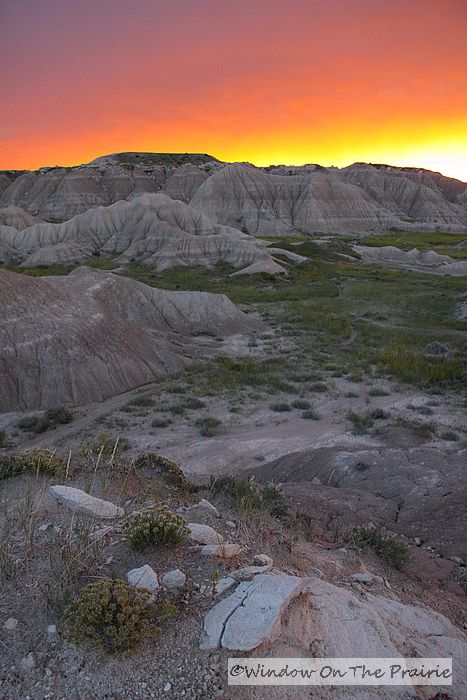 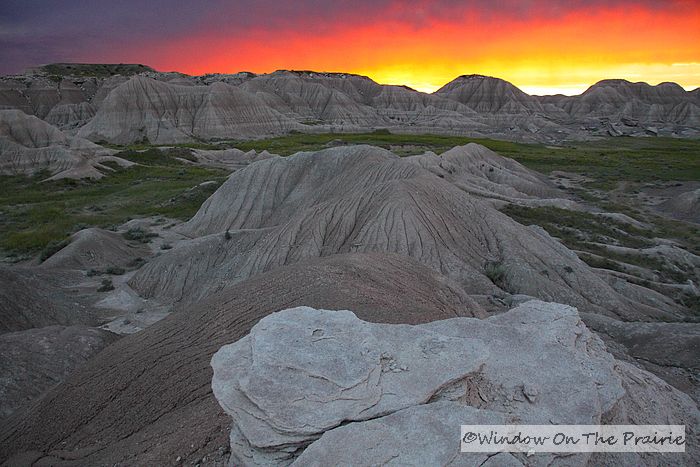 ARGH!!!!  I CAN’T TAKE IT ANYMORE!!!!  EVIL ROTTEN BLOODSUCKERS!!  I’M GOING BACK TO THE TRUCK!! WHO CARES ABOUT TAKING PICTURES?!

I ran back to the truck, cloud of bloodsuckers trailing along like a ravenous pack of wolves.

Over the hills and finally down into the campground.

I tore open the truck door, threw my camera inside, jumped into the driver’s seat and slammed the door.  I sat there panting, eyes closed, sweating, and trying not to cry.  My frustrated tormentors threw themselves against the truck windows, fangs bared and dripping with blood.

Ok, so maybe not that last part.

But then suddenly I remembered that scene from the movie Jurassic Park when Jeff Goldbum and Sam Neill are hiding in their vehicles from the prowling Tyrannosaurus Rex just outside their windows. I could SOO relate to them at that moment.

The rest of the evening is best to be forgotten. Harland got back to the truck after dark. I strongly suggested we stay in a hotel for the night. But Harland said we had driven all that way and should make the most of it and what a shame it would be to miss the sunrise the next morning.  I grudgingly agreed to stay. Harland set up the tent. I finally got out of the truck, changed and brushed my teeth while marching around the truck one step ahead of the swarm. We tried to sleep that night while the bloodsuckers tried in vain to find their way into our tent. A windstorm came up in the night, but luckily we didn’t get any rain. Harland was out early the next morning taking pics, while I slept in. When he got back, we struck camp in record time and left the badlands and the mosquitoes behind us. Just a few miles down the road we stopped to photograph some cattle.

But there were no mosquitoes.  Blessed relief.

We found a shower in a campground a few miles down the road, and although I don’t usually enjoy camp showers, I swear, it was the best shower I ever had. Harland said that he washed off so much DEET that there was probably a record fishkill somewhere downstream from the campground after he was done.

It’s going to take a long time for me to be able to look at the pictures I took at Toadstool without remembering the bloodletting I went through to get them.

Oh well, just another day in our varied, but never boring, lives.